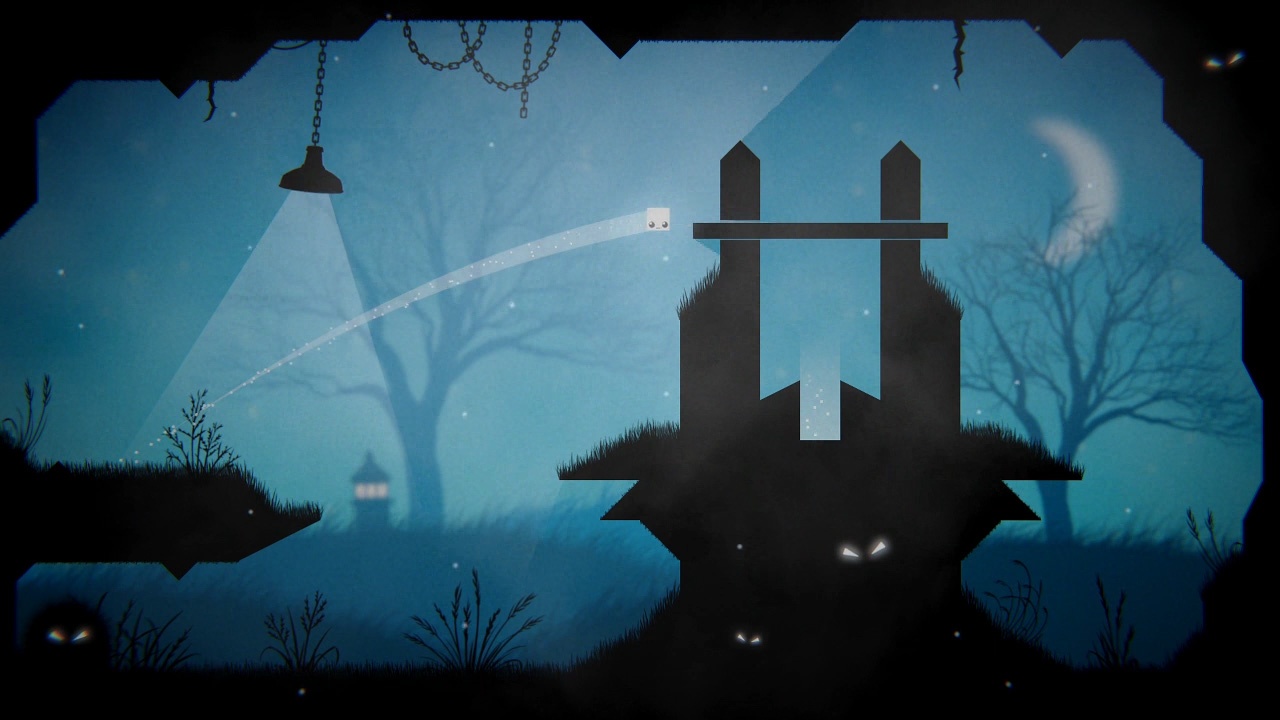 It’s never a good thing to be driving around midnight. It’s always dark and there could be plenty of hazards in your way. However, with Midnight Deluxe, a game developed by Petite Games and also developed and published by Ratalaika Games, it’s actually quite alright to go driving around midnight as this golfing-inspired adventure makes a hole-in-one on the Nintendo Switch, but is it all on par or does it just end up being a bit of a bogey?

At first glance, you’ll be very much forgiven if you feel a sense of déja vú with the look of Midnight Deluxe’s aesthetics. Developed by the same software house that released 36 Fragments of Midnight, this title is also a remake of the Wii U’s Midnight 2 and Steam’s Midnight. The ‘Deluxe’ tagging comes into play with, not only an enhanced graphical overhaul, but in actually an amalgamation of both Midnight and Midnight 2. With each of the twenty-eight levels from its two previous incarnations, this new switch version also boasts an additional fourteen exclusive levels; bringing its level tally up to a very pleasing, seventy; that’s definitely a figure sure to draw your attention and not let your curiosity fade away.

Despite having similar visuals to 36 Fragments, Midnight Deluxe plays a very different style of game. Instead of being a 2D platformer, this game takes its inspiration from the mechanics of golf, mixed with a little sprinkling of Angry Birds for good measure. In its basic premise, you hold down the A button, measure the angle and power of your shot with the left thumb stick and release it by depressing the A button, as you attempt to find the hole in as little shots as possible. As well as its simplistic control scheme, the touchscreen has been fully implemented and can be used as an alternative control method. Using your finger to set the trajectory and speed of your shot feels very intuitive here, however, there can be instances where your field of view becomes severely restricted as your sliding digits block important elements upon the screen. 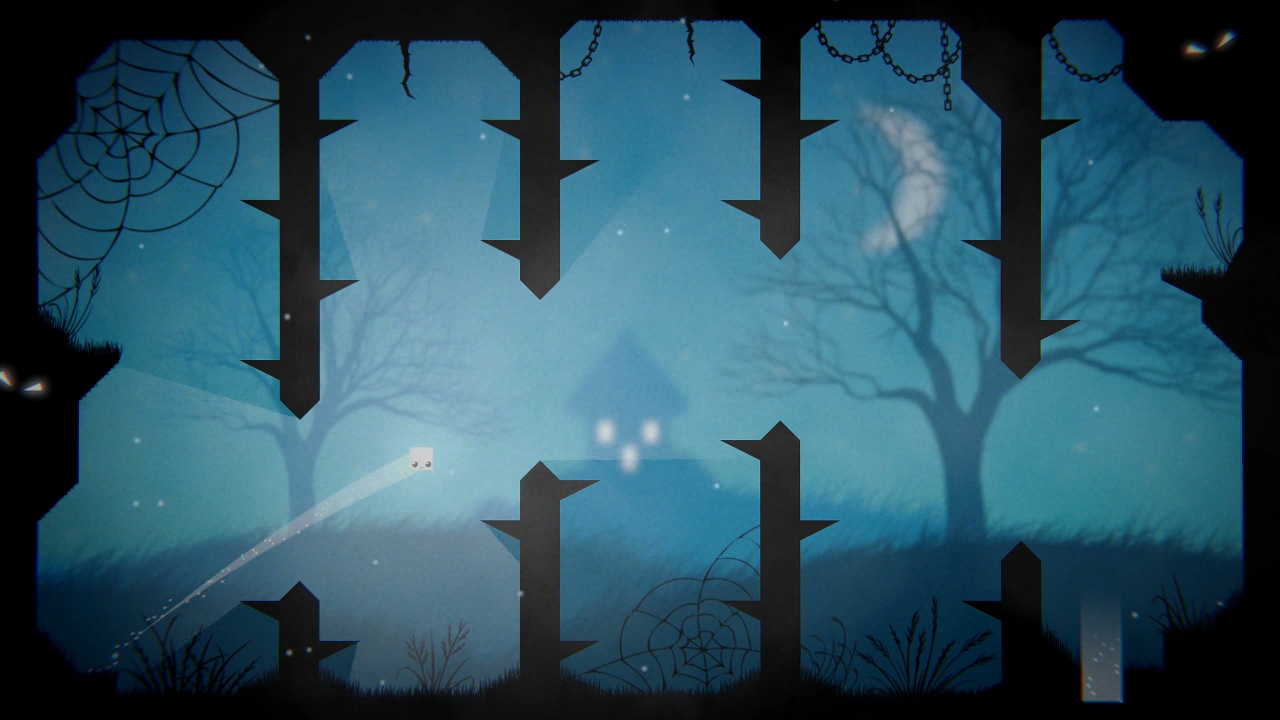 Instead of striking a ball, you control Midnight, the same bright, white cube who starred in the 36 Fragments game. With a smile on his face, you determine a trajectory on which to send him in order to settle within the hole that marks the end of the level. However, each level also contains a number of obstacles that stands in the way of golfing glory. Creatures, levers, circular saws and lasers all provide a puzzling aspect to the gameplay which need to be overcome to either, allow access to the hole or bring an urgency in finding it. This adds a slight variation to the gameplay as some levels may require a detour from the hole, whilst others will bring an added pressure of releasing your shot before certain events unfold, such as a creature blocking the hole or chasing you around the level.

The completion of each level awards you with a set of stars, up to a total of three. How many are awarded is dependent on how many shots you take in getting Midnight to the hole. Much life golfing pars, each hole has a predetermined number of shots in which you need to finish the course. If you remain within par, you receive three stars, any more than that and the award reduces to one or two. This offers some form of replayability as you revisit levels to achieve those elusive three stars.

You also have an option to restart each hole as you play by pressing the X button, it’s a nice little inclusion, with an instant restart, however, this can also lead to a stop/start type of play. If you know that your current hole requires one shot to earn the maximum amount of stars and your trajectory fails to meet this requirement, a quick reset allows you to start again and so on and so forth; constantly resetting the hole until you hit that sweet spot. This in turn can lead to some frustration as you constantly restart the same shot over and over again. 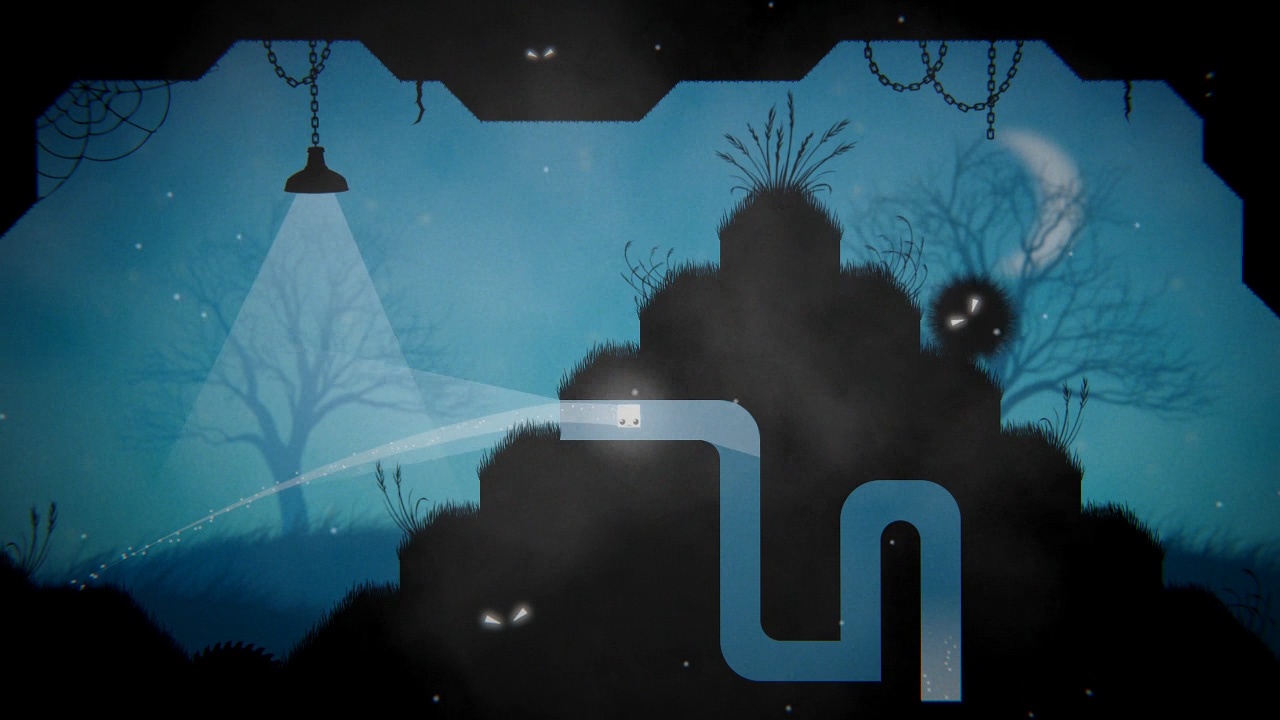 Despite its simplicity of gameplay, some of the level designs are very cleverly, and fiendishly laid out. As well taking into account the force and trajectory of each shot, you also need to incorporate the angle of Midnight’s square shape ricochets and angular protrusions of some of the environments design. This also adds an element to the need of having to stop and start the game in finding the right path to the hole.

Apart from its 2D levels and similarities to 36 Fragments, the production values of Midnight Deluxe produce a pleasing aesthetic. Its eerie, murky backdrops are nicely drawn and suitably shaded. This becomes even more apparent with a rather special use of a lighting mechanic that sees a very effective use of angular light beams that emanate from Midnight as traverses each course. It’s very effective and pleasing to the eye. From the opening titles to the star awards screen, Midnight’s presentation is charmingly drawn and written. With a soothing piano soundtrack, its complete aesthetic feel produces a very tranquil and relaxing state of play, despite some of the more challenging levels bringing some frustrations in overcoming their design.

Overall, Midnight Deluxe is nice package that offers a decent challenge. If you’re looking for an action orientated game, or even another 36 Fragments, then this really isn’t the game you’re looking for. With its simplistic gameplay and soothing tones, this is very much a nice, relaxing jaunt but be warned, it can also contain some very frustrating moments. With its pocket-money pricing, this game offers good value for money as you basically get two games for the price of one, as well as extra content that is new for this Switch version. There isn’t much wrong with Midnight Deluxe, but then there isn’t anything really new or ground breaking in its design or gameplay mechanics; this ultimately leaves the game feeling just a little bit average in its execution. That being said though, there is definitely some fun to be had with this title and most certainly contains that ‘one-more-go’ mentality. It may not be as satisfying as a hole-in-one, but it most certainly isn’t under par either.