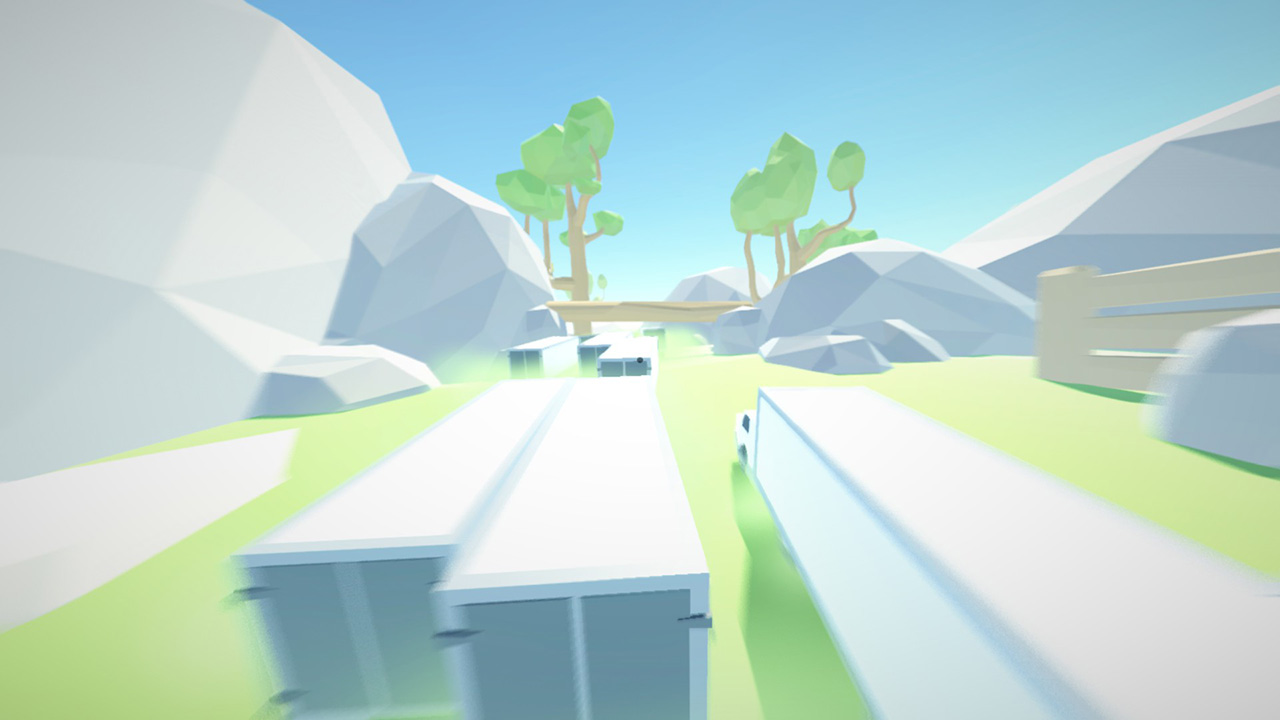 Everyone who had a cellphone prior to 2006 played Snake at some point, or at least whatever your phone’s knockoff version of Snake was. The idea of a monochromatic reptile slowly filling up your very small screen while eating dots that were supposed to be fruit was the ultimate time waster. It was a game before phones had real games (at least in the US, Japan was already leagues ahead by then). But it wasn’t just that it was the only game in town: it was well executed in spite of an incredibly simple premise. Imagine if that had been a situation where it drained the battery or made things generally go wonky on your Nokia? Gaming never would have taken off. The idea of “simple premise, beautiful execution” goes a long way, and it’s something that we can see clearly in TinyBuild’s latest Switch release, Clustertruck.
The plot and main point of Clustertruck is simple: for whatever reason, you’re surfing on the back of a long haul truck, and you’re in a whole traffic jam of long haul trucks moving in a similar direction. You need to make it to the end in one piece, and that’s it. Oh, the trucks are kind of just moving and driving with a singular direction in mind, and they’re not paying attention to anyone else. But the trucks will crash into each other and obey certain physics properties, such as occasionally flipping over, and also ignore certain ideas, such as taking flight in a ridiculous arc. Well, good news, bucko: you gotta run, jump and hang off these trucks in first person perspective and get to the damn end in one piece.
First and foremost, although this port does contain all of the seasonal DLC and runs exceptionally well on the Switch, there is not any new content as far as I can tell. Players who tried this on the computer and didn’t like it should keep in mind there isn’t any wacky motion controls or special stages where you jump off trucks in Mario Odyssey. However, one of the biggest things that people didn’t enjoy at launch was the lack of inversion option, and that is definitely one of the first things that I ticked in the control setup. If you were totally weirded out that up meant up instead of down, you can toggle that to your heart’s content and enjoy maneuvering like a jet fighter instead of a crazy dude running on top of trucks. 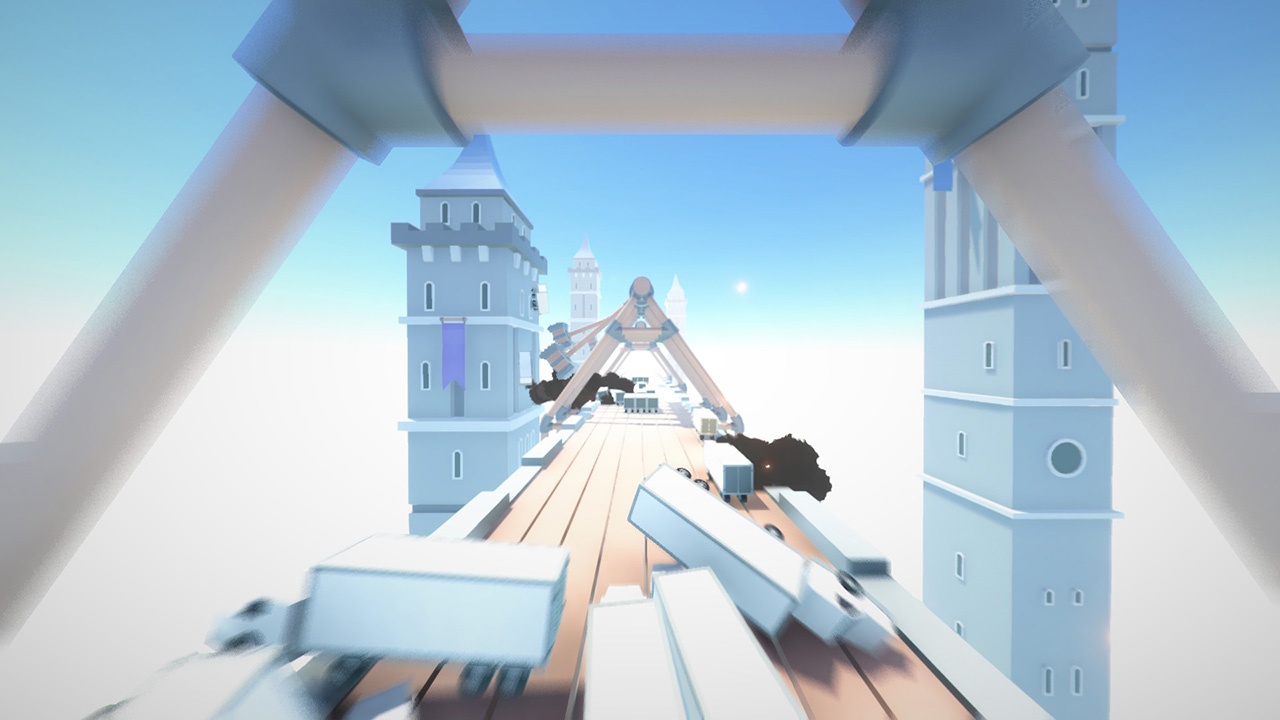 Clustertruck does exhibit and keep to some crazy rules of its own for the player. For example, you get an exponential speed boost if you jump off the cab of the truck instead of the cargo. Players can sometimes grab the back or sides of a truck in order to save themselves, but you can’t just hang: if you touch, you gotta immediately vault, and this will sometimes launch you far, far up into the sky. Oh, and inertia doesn’t always work the way you think it will. There’s a level early on where trucks start driving AT you instead of with you, and the result is…you going crazy fast. Wait, is that proper use of inertia? Opposite directions, same correlation, Newton’s third law…maybe that’s right. Screw this, I failed science.
It’s impressive that Clustertruck does handle itself fairly well in handheld mode, because there are a LOT of things happening on the screen at once. Besides somewhere between 20-50 trucks all doing their own thing at once, you also have various bits of scenery interacting with you, like falling rocks or collapsing bridges. On top of that, should you do the holiday DLC, you also have to look out for exploding tombstones, ghostly pulse trampolines and plenty of winter mayhem in the Christmas expansions. Not once did I think the game was chugging or struggling to keep up with what the developers, Landfall Games, was intending. The fact that our little Switch dude is able to keep with such a crazy amount of draw demand is nothing short of impressive, and indicative of the real power of the Switch.
Players will get frustrated their first time through. There’s a lot of reasons for this: the game is chaotic, you end up going really fast straight to your death, and, oh yeah, the fact that you do everything with the controller means that the looking around aspect is kind of off the table. It’s already hard enough in the PC version of Clustertruck to swivel your head and not get disoriented, but it’s damn near impossible with a JoyCon or Pro Controller. As much as it sucks, my advice is to simply change your technique. A lot of Twitchers and streamers won’t want to sit still in order to gain the day, but that is the best solution in a lot of cases. Instead of rocketing forward like a flying squirrel on speed, you gotta plot out your course and make fast, but careful, decisions. The result is a slightly lower time bonus BUT a significantly higher air time bonus and, oh yea, you finish the damn level. 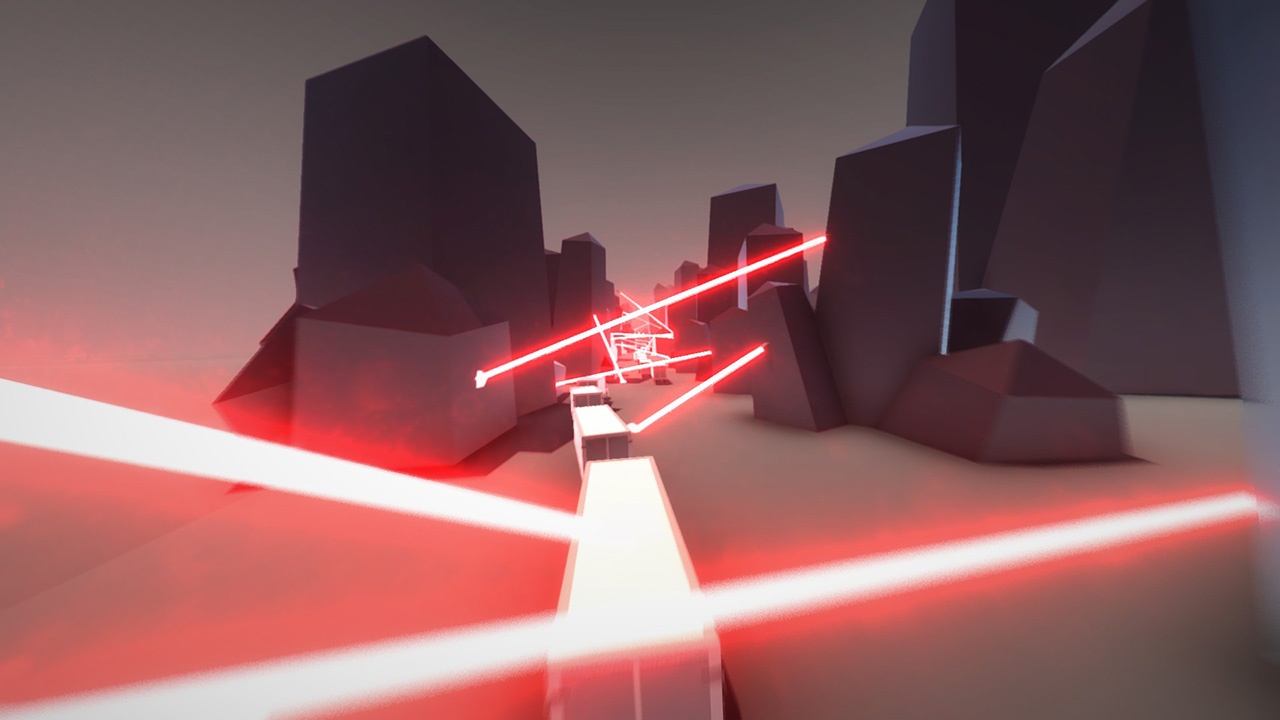 Speaking of bonuses, Clustertruck will grade you at the end of each successful stage on your performance (speed, tricks, finishing) and award you Style Points. I desperately urge anyone who may be feeling annoyed by the game to please, please play until you have amassed at least enough points to unlock your first ability, because then the game gets damn good. You see, there’s a ton of weird and interesting abilities that Clustertruck lets you bake into your game, and they start with the basics (air dash, double jump) and move up to the truly insane (grappling hook, time manipulation, truck spawning). As great as the game is as a core idea, being able to add a certain ability makes for a whole new strategy and may be a boon to people who are fed up with constantly falling to their deaths. Being able to freeze all the trucks for a limited time is essential to clearing some of the crazier levels without dying, but long time players of any game will be happy and at home with the unlocked double jump.
Clustertruck makes up for its lack of plot or even logical reason to play by having the game itself be clean, tight and fun. This isn’t going to take over your favorite game of all time, mostly because it does feel like it’s over before you know it, but this thing is a really good time and demands that you get better at it. You create your own style. You feel and look better when you do well. You laugh and freak out when you’re hundreds of feet up and just trying to coordinate how to land on one of those damn trucks that’re careening off each other. It’s a good game, and it’s a good time, and it’s a great fit for the Switch.