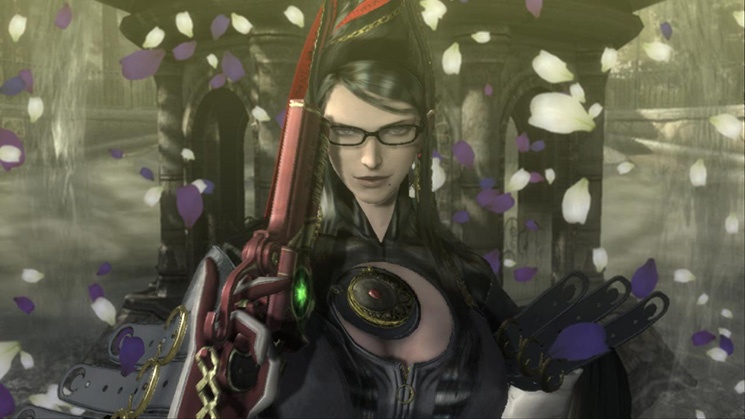 It has been nine years since Bayonetta first graced our screens upon the PS3 and XBOX 360, yes I know, I’m feeling just a tad older now too, and it can’t be denied that its female protagonist has quickly become one of the most iconic figures within video gaming since that time. With further ports coming to the Wii U and PC platforms over the years, the latter being upgraded with 4k visuals, the witch has now returned again to grace us with her presence upon the Nintendo Switch. Developed by PlatinumGames and published by Nintendo, this latest port of the game also finds its sequel breathing new life and the pair of them have been re-released in anticipation of the series’ newest chapter, and a Switch exclusive, Bayonetta 3 which releases later this year.

In case you’ve had your head buried in the sand over the last decade, Bayonetta’s story revolves around the Umbra Witches, an ancient cult who were the followers of darkness within the fictional European city of Vigrid. Along with the Lumen Sages, the followers of light, the two factions preserved a balance and order within the world by sharing the eyes of the world; a mystical treasure with each group gaining possession of a left eye and a right eye. With these treasures, the two factions were able to oversee the just passage of time, until both groups mysteriously vanished under unknown circumstances. After a five hundred year slumber, our story starts as Bayonetta has awakened within the depths of a lake during the modern era. With no memory of her past and only the possession of an ornate piece of jewellery, which she believes to be the left eye, our heroine embarks on a journey to rediscover her past and reunite both of the eyes of the world.

Essentially a hack and slash variant, this third person action game sees you playing as the witch, Bayonetta, over sixteen chapters, each broken up into several verses, as well as an epilogue and prologue. Each of these levels have a satisfying length to them, as well as a challenging difficulty level that will offer many hours of gameplay. Following very much within the mold of Devil May Cry, its art style and fighting techniques play in a similar mechanic. With melee and long-range attacks, battle-axe wielding and high-heeled guns, there is a breath-taking amount of combinations that can be strung together in combat. Partner this with an array of moves, such as running, jumping and cart-wheeling, this wondrous witch becomes an absolute joy to control and behold. 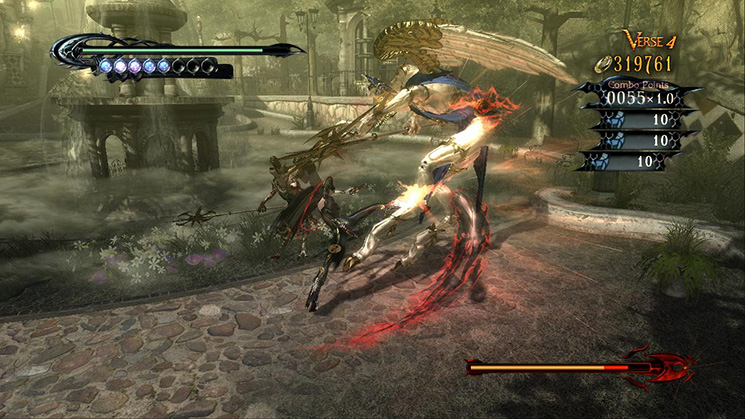 With her magical abilities, Bayonetta can open up the gates to other dimensions, which you’ll flit between during your play time. With this ability, you fight an endless horde of angels and demons, some of which are truly impressive in their look and scale. However, to even up the playing field, stringing together a combination of moves without taking damage, unleashes special abilities such as Torture Attacks and some equally impressive allies that form from the free-flowing hair of Bayonetta. It’s also advisable to make good use of another ability within Bayonetta’s arsenal, Witch Time. This is triggered by perfectly dodging enemy attacks, which in turn, slows down time and everything around you. With the quick movements of Bayonetta, this makes taking down your various foes a lot easier to accomplish, as well as breaking through some seemingly impossible barriers.

As you defeat the enemies around you, they drop golden rings, or halos, that can be collected and used within the Gates of Hell; a bar deep within the underworld that acts as a kind of store. From here you can spend your golden currency on a mind-boggling number of items such as guns, new fighting moves and combinations as well as ingredients with which to concoct your very own magical spells and healing properties with the creation of various lollipops.

From its free-flowing movements, countless combinations and epic boss fights, Bayonetta is a game that constantly surprises and pleases as you play through it. Although challenging, it often makes you feel empowered as you defeat the colossus of enemies and progress through each of the stages. Although the story can feel a little confused at times and sorry, I’m not going to give anything away in this respect, its varying characters, some of whom play particularly pivotal roles in the story’s development, all possess a charm and likeability that further enhances the games plots and themes. 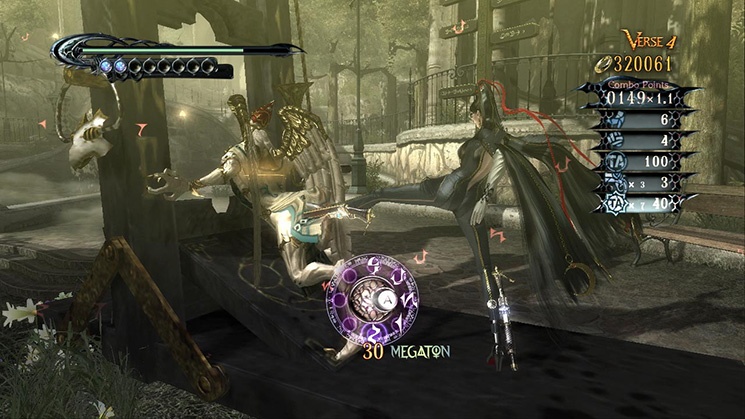 So what has changed within this new port of a nine-year old game? Well, not a great deal really, but what has been added or enhanced does bear an overall improvement on the games previous releases, especially when it is compared to the Wii U version. The original release came at a time when developers thought it cool to use a colour palette that mainly consisted of browns and yellows to create a distinct aesthetic. Unfortunately, this still remains on the Switch, however, the graphics are now much smoother and crisp, again, especially when compared to the muddy textures of the Wii U. It still doesn’t quite match up to the PC’s 4k resolution but it does now bear a much closer resemblance to the XBOX 360’s aesthetics, the original console that the game was developed and designed for, and this isn’t necessarily a bad thing for the Switch. It’s also a little disappointing that the game runs at 720p, whether docked or in handheld mode, and runs at a near 60fps. Saying that though, the game still looks suitably impressive and runs super-smoothly with no slow-down or texture pop-ups when the action hots up on-screen.

Loading times are significantly faster with this new version too, and with the playable mini-game in-between levels, Angel Attack, in which you shoot angels with bullets that are found within the campaign’s level, those frustrating waits for each level can now be put to rest in a bygone age. Checkpoints have been given a more forgiving frequency too, allowing some of the frustrations of previous versions to now be long forgotten. However, the biggest addition to the Switch version of Bayonetta has to be the inclusion of touchscreen controls. By swiping certain gestures, you can now utilize the switch’s touchscreen for a more precise system of movement. It all works particularly well, especially with pulling off some of the more complicated moves or combo attacks. As a small bonus, its also worth noting that a number of costumes, which were all previously DLC, are also included although they are simply for cosmetic reasons. However, they can also add some extra surprises within the gameplay elements of this ported title.

Overall, this new version of an old classic holds up well, despite its age. Bayonetta still looks as fresh as she did back in the day and the mechanics of its gameplay still satisfy immensely with each down-trodden foe defeated. Because of the nature of the game, the action can be little too intense when playing in the switch’s handheld mode, but with prolonged play, soon becomes a mode that feels accustomed; besides, just having the delights of playing such a game on-the-go is a pleasing experience in itself. Although the enhancements on this re-port aren’t particularly ground-breaking, they do provide a much more refined experience, particularly for Nintendo users, and does give the game a whole revitalising feel on the Switch. If you’ve ever played a previous version of Bayonetta, then what are you waiting for as, you already know what you’re missing. If you haven’t ever played it before, then where have you been? For I can tell you now, you really don’t know what you’re missing. Ding! Dong! The witch is back, and she’s never been as sassy as she is now, upon the Nintendo Switch.