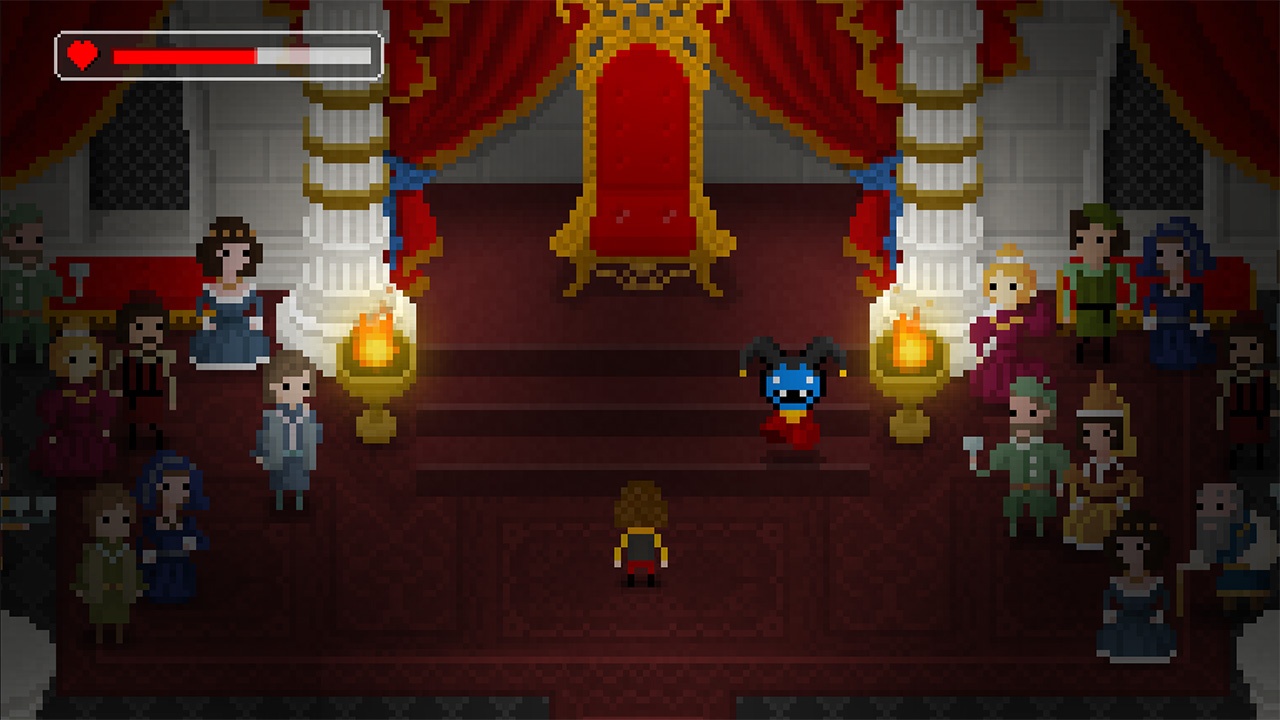 With the gaming charts dominated by budget, processor taxing,  triple A titles such as Far Cry 5 and remasters and re-releases like Shadow of the Colossus and Bayonetta ,   it’s refreshing to pick up a title like The Count Lucanor.   At first glance you can’t help but feel a wave of nostalgia wash over you as The Count Lucanor boots up.  Take a look at the screen shots below.  For anyone old enough to remember,  this was how state of the art games used to look back in the days when ‘internet’ was something you got at the hairdressers.  Or when calling the telephone operator and asking for ‘a  Virgin mobile’ would have you visited by the vice cops.   You get the picture.

A brainchild of UK indie developer Merge Games (those of Monster Truck Destruction, Limbo and Awesomenauts fame), The Count Lucanor is a retro throwback  2D pixel art adventure that has you exploring a mysterious castle and solving puzzles along the way.  In the game you’re cast in the role of Hans, a petulant 9 year old boy.  On turning 10,  Hans discovers, much to his dismay,  that his mum was too broke to afford any presents for him.   So Hans decides to bail on his low rent lifestyle and seek his fame and fortune in the big wide world.  His grief stricken mum realises she’s unable to dissuade him and, instead,  gives him her blessing as well as three gold coins,  some cheese (it’s all they had to eat anyway) and his grandfather’s walking stick.

Initially you’ll write Hans off as a spoilt brat who needs to learn some hard life lessons.  But as The Count Lucanor progresses,  we found ourselves warming to the little scallywag and, eventually, rooting for him. 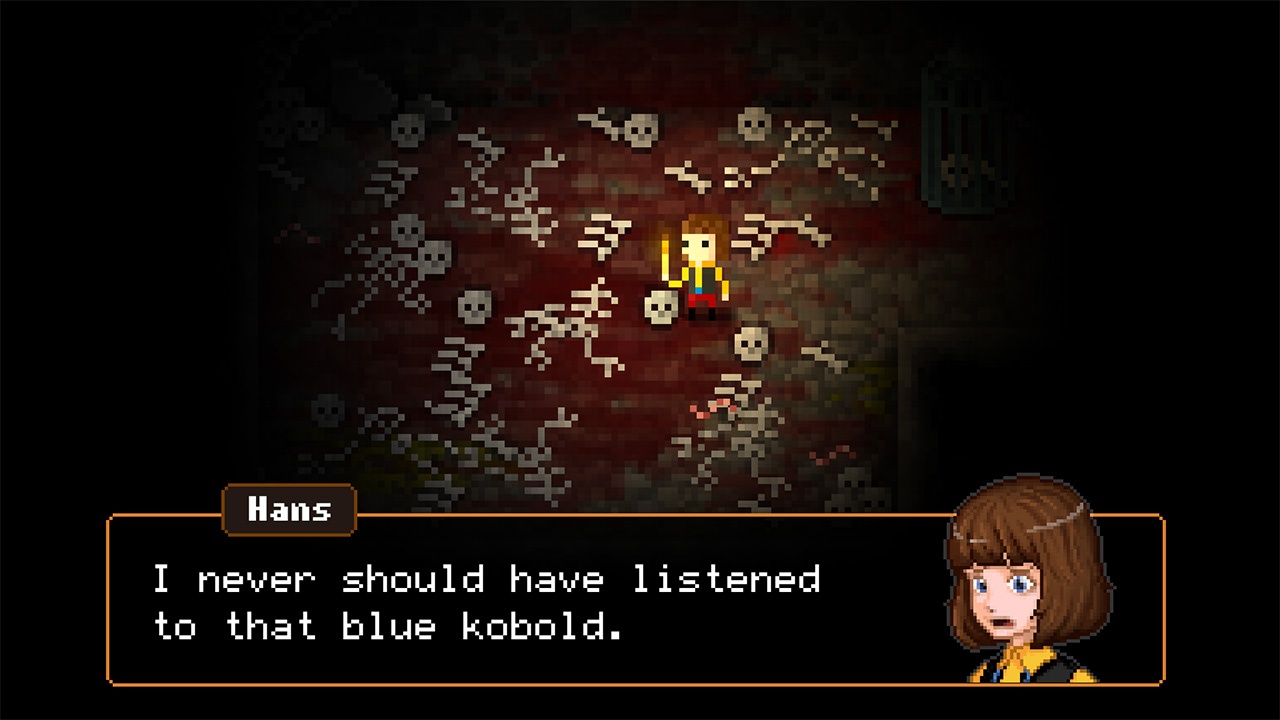 After Hans leaves the family home,  he wanders through forests and cemeteries coming across several characters.  All who seem to be out for themselves and in desperate need of some sort of help.  Whether or not you help them determines how the game will unfold.  Eventually Hans ends up in a cemetery, in the route we took he’s knocked out by a crow and wakes up in total darkness.  This is where the real adventure begins. Following a dimly lit path Hans makes his way to a castle owned by the titular Count Lucanor.  It seems the count is on the lookout for an heir and successor and, in order to qualify, all you have to do is complete a series of trials and solve a number of puzzles.  Easy, right?

Each room of the castle has its own demanding puzzles to unravel and, by solving each one,  you get to move on to the next.    The castle is a dark and menacing place populated by ghostly Guardians who protect the castle from intruders.  There are no guns in The Count Lucanor, so your best bet is to hide from them and hope they pass you by.  The fact that you never know when a Guardian is about to appear and the only way you can see where your going is by using (very difficult to find) candles,  makes The Count Lucanor a tense, nail biting experience.  At this point it’s worth mentioning that The Count Lucanor is filled with rooms that have tough hazards to avoid or navigate your way around.    The only way you can save the game is by throwing a golden coin into a fountain.  And, yes, you guessed it, those gold coins are as rare as….well, as rare as gold dust.

Luckily the puzzles in themselves are challenging without being impossible.  After a few minutes of trial and error, you’re likely to have a light come on in your head as the answer suddenly becomes clear. 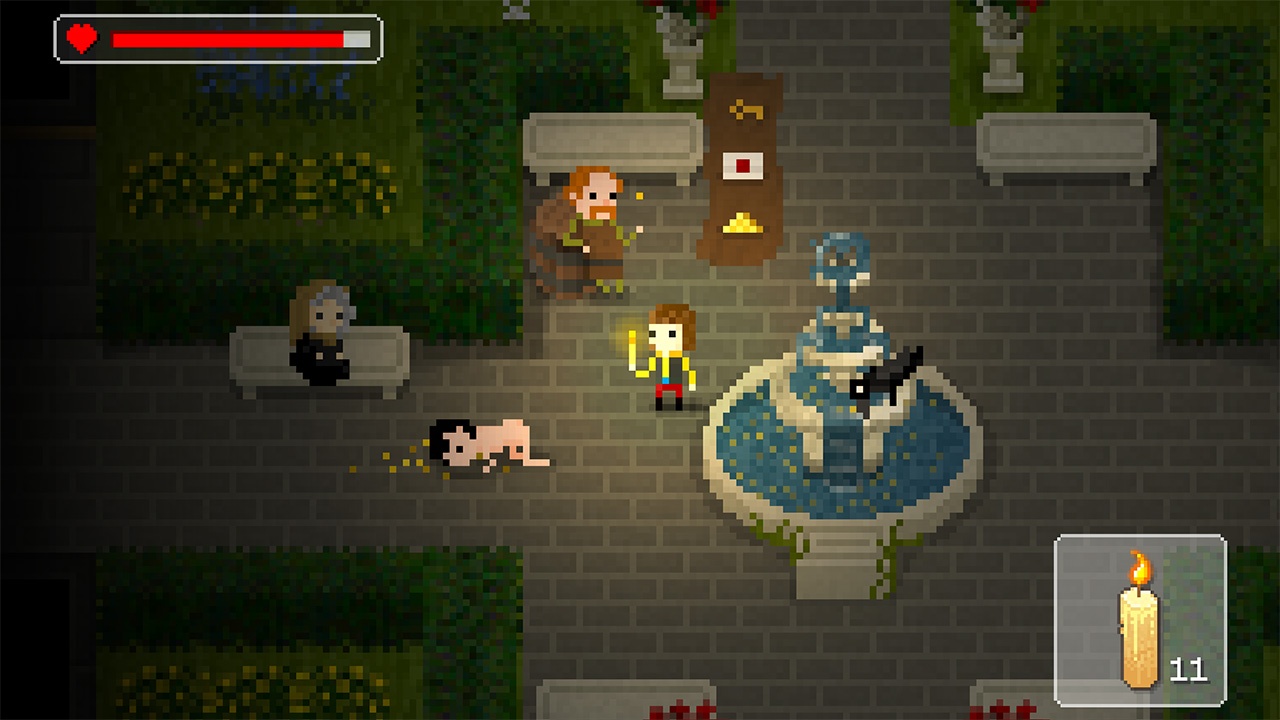 Audio-wise,  The Count Lucanor is nothing short of being a sheer work of art.  We played the game with external speakers connected to the TV and, I’ve got to tell you,  the game sounds excellent.  As you make your way around the woodland and eventually the castle,  The Count Lucanor is filled with the living sounds of birds,  animals and  the wind whispering through the trees.  Brilliant.

Graphically,  The Count Lucanor is a welcome  blast from the past.  This is sheer old school flavour that you really have to savour with your neighbour.  The retro pixel art design is a perfect homage to the early glory days of gaming and almost brought a sentimental tear to our eyes.  The game does suffer slightly from (inexplicable) frame rate issues,  and Hans is incapable of running despite whatever dangers may be present.  But those minor niggles aside, The Count Lucanor is a worthy adventure title that’s definitely worth picking up.  With around six hours of gameplay and countless puzzles to decipher,  you’ll enjoy every moment of this gem of a title.  Go play.