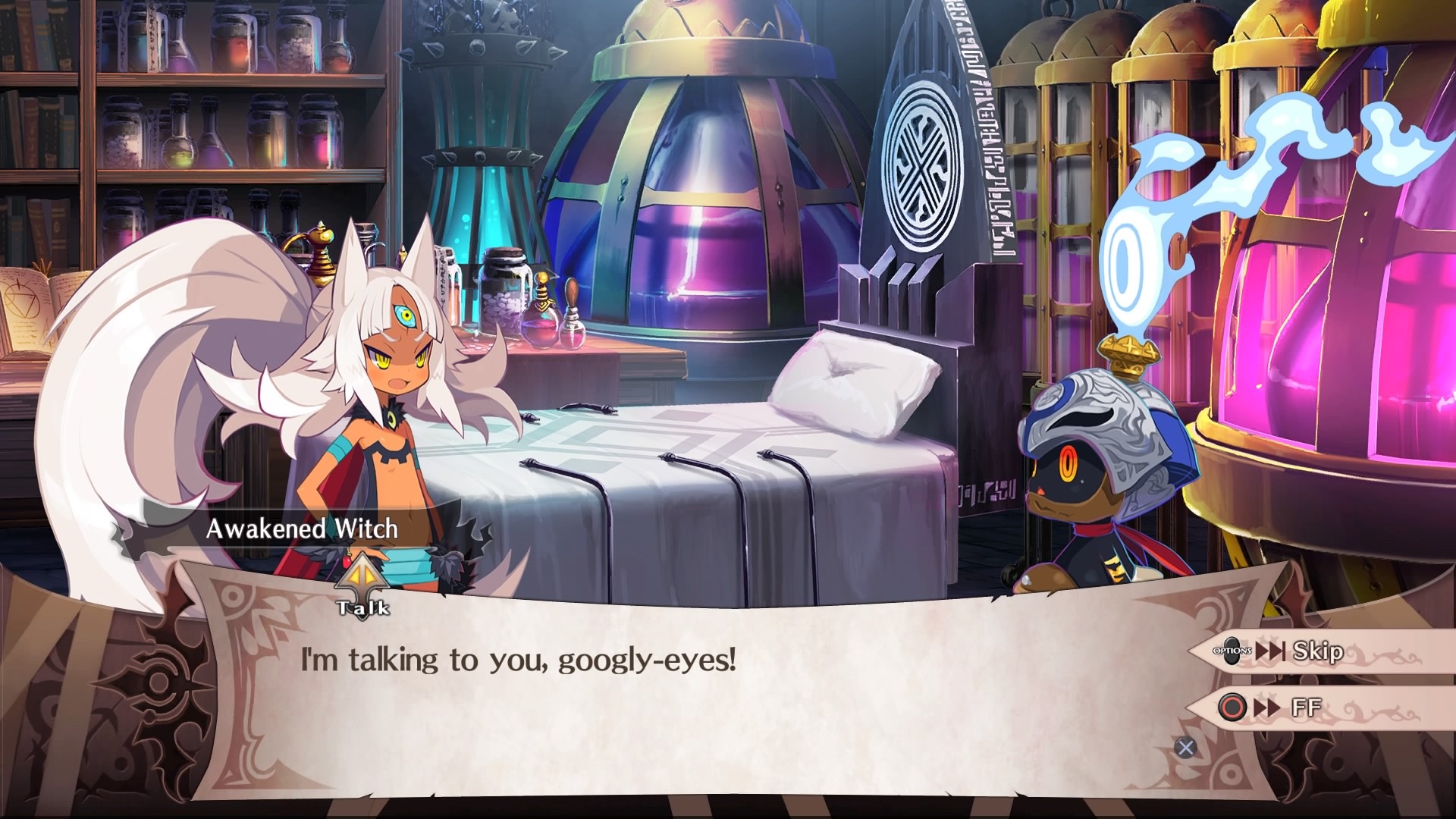 Players do not have to be familiar with the first game to understand this one as it has a whole new storyline, the only character carrying across is the titular Hundred Knight. The story follows Amalie, a girl who lives in the small village of Ecke. We join her as she is looking for her missing sister Milm. Unfortunately her sister decided to get a birthday present for Amalie by venturing into the forbidden lands to find a mana flower – why she couldn’t have just made her a cake is beyond me. Milm manages to find her way back on her own but has the unfortunate addition of a cut on her head, which actually turns out to be a witches eye, a symptom of the infamous “witches disease”.

The townsfolk explain, through rather clunky dialogue, that if the eye opens Milm will turn into an awakened witch and bring death and destruction with her – which apparently happened 3 years earlier when their parents were killed in a similar incident. With the threat of silver arrows to the eye by the locals, the two sisters decide to travel to the labs of a dodgy sounding organisation the Weisse Ritter in hopes of a cure through a special surgery.

As you could probably guess the surgery doesn’t go to plan and Milm awakens as the witch Chelka. When she awakens there is a surge of magic energy and the stuffed toy Amalie gave to her sister, the Hundred Knight, comes to life. This is where we step in, taking control of the Knight as we get involved in helping to save Milm.

Throughout the game you’ll get the occasional conversation where you can use Self Assertion, this allows the Hundred Knight to respond to a character by either asserting, questioning, or denying. Although not immediately obvious, choices you make will have an impact on the story and what ending you receive.

One of the more daunting aspects of the game, much like the first, is the amount of features and mechanics that are on show. 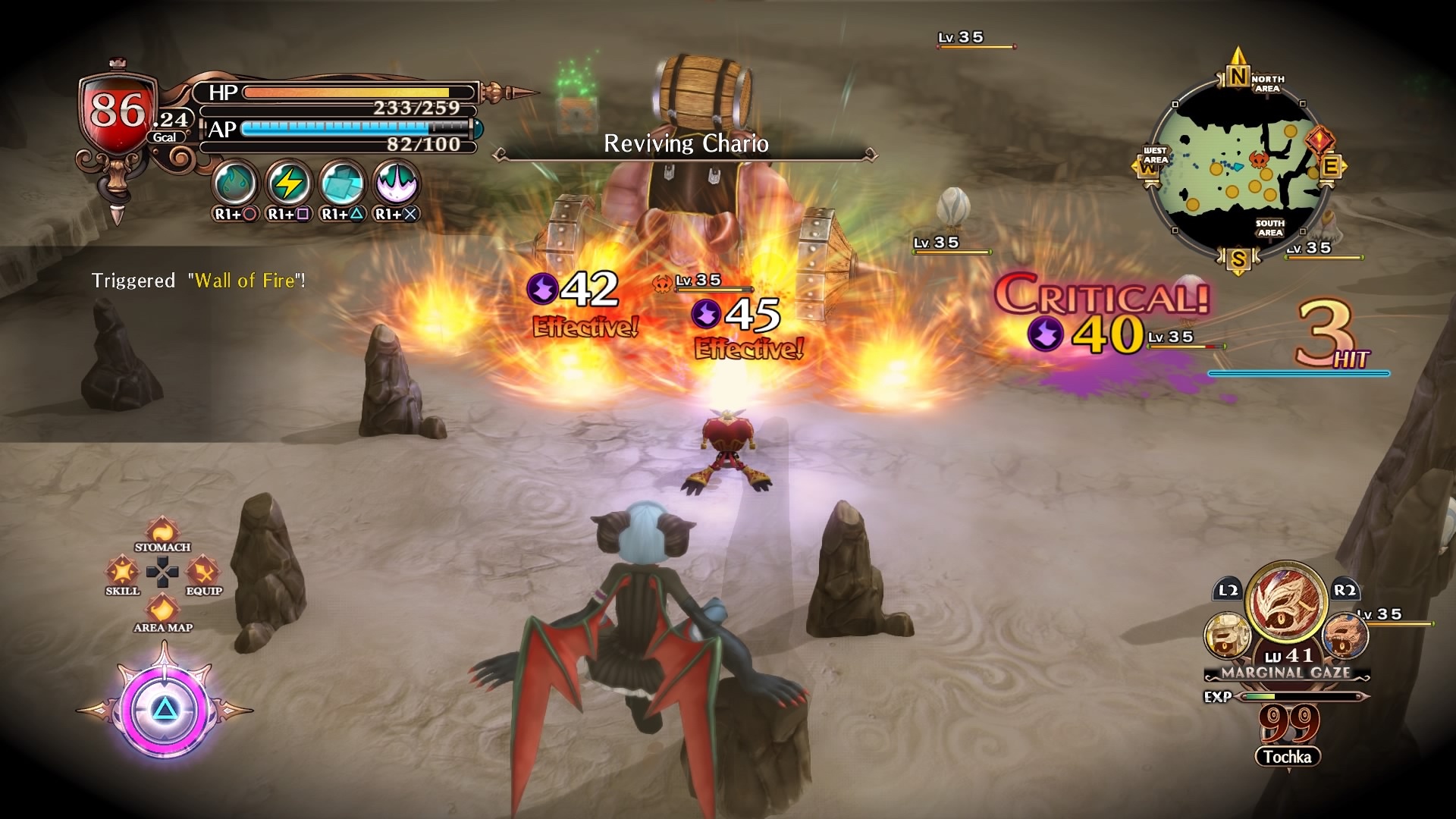 Stamina comes in the form of GigaCalories. You have a maximum of 100 and they slowly decrease when you move, dash, heal, dodge etc. You can restore it by either absorbing equipment from your stomach (which is sort of your inventory but I’ll get back to this later), finding a certain enemy that is often at save points, and by triggering Depleture. The latter is achieved by finishing a full combo and then while you still have a combo using L1 to drain calories and adrenaline points (AP) from enemies. Running out of calories won’t kill you, instead your abilities will decrease. You can use L3 to self-recover HP by using large amounts of giga calories.

Stomach Stock (as previously mentioned) is a bit of a pointless edition. You have a regular inventory which includes all of your healing items, weapons, armor, materials etc. During a ‘stage’ your stomach fills with the items you find. You end a stage by either progressing the story to a certain point (usually killing a boss) or by returning back to your castle by either walking there or teleporting through a save point. Your stomach starts off small but gets larger as you level. Grinding is slowed down considerably by the need of having to go empty your stomach into your inventory, if you don’t keep on top of it you end up having no room for further items unless you consume the more common ones just to make more room for the juicier equipment.

Dying is possible, when your HP hits 0. Doing so results in your stomach being emptied but other than a little setback in what equipment you have available to you, there’s no major repercussions.

Combat involves attacking, dodging and using special attacks – but like with everything else in this game, it’s not that simple. When attacking you have a 5 move combo that is made up of the 5 weapons you attach to each weapon slot, with each attack going through the weapons one by one. Weapons come in the form of swords, staffs (red, black or blue), hammers, lances and spears. Each type has different effects such as hammers being powerful, causing flinching damage and knocking back enemies, however they are slow and limited in range. Whereas lances have a high critical chance and a longer reach but lower damage. More importantly each weapon has a type: slash, blunt and magic. This system is reminiscent of Pokemon, if not a little more rudimentary. Certain enemies are either strong or weak against certain damage types, Hundred Knight is also affected depending on the Facet he uses. The element of a weapon is usually dictated by the type of weapon: hammers are blunt and swords have slash etc but special weapons can have varying elements.

There is also a magic gauge which fills up by attacking and killing enemies as well as using skills. Using it opens up your third eye power causing a shockwave that pushes back enemies, as well as increasing attack, defence, speed, AP and reduces cool down for skills. I found myself neglecting magic almost entirely, other than the odd boss battle. The meter is out of the way at the bottom of the HUD, with such a busy screen it was easy to overlook. On top of that I was so overpowered from Krafting that I didn’t need the extra power it offered.

After spending the first hour or so getting use to all of the different features listed above, they decide to add even more and continue to do so every chapter of the story.

One of the first big editions are Facets, which are basically different combat styles for the Hundred Knight. At the start of a stage you can equip a maximum of 3 from what you have unlocked. Fortunately you only start off with 2 so you have a chance to get your head around them. Each facet focuses on a different style of play such as Power Fortress which excels in defence and area of effect attacks but has low resistance to magic. They also have completely different skills that will have to be unlocked and upgraded independently from each other facet, although you do get skill points very easily. What weapons they have equipped is also separate, due to the fact different ones excel with different types of weapons, so you need to almost constantly change and upgrade equipment for the different facets. 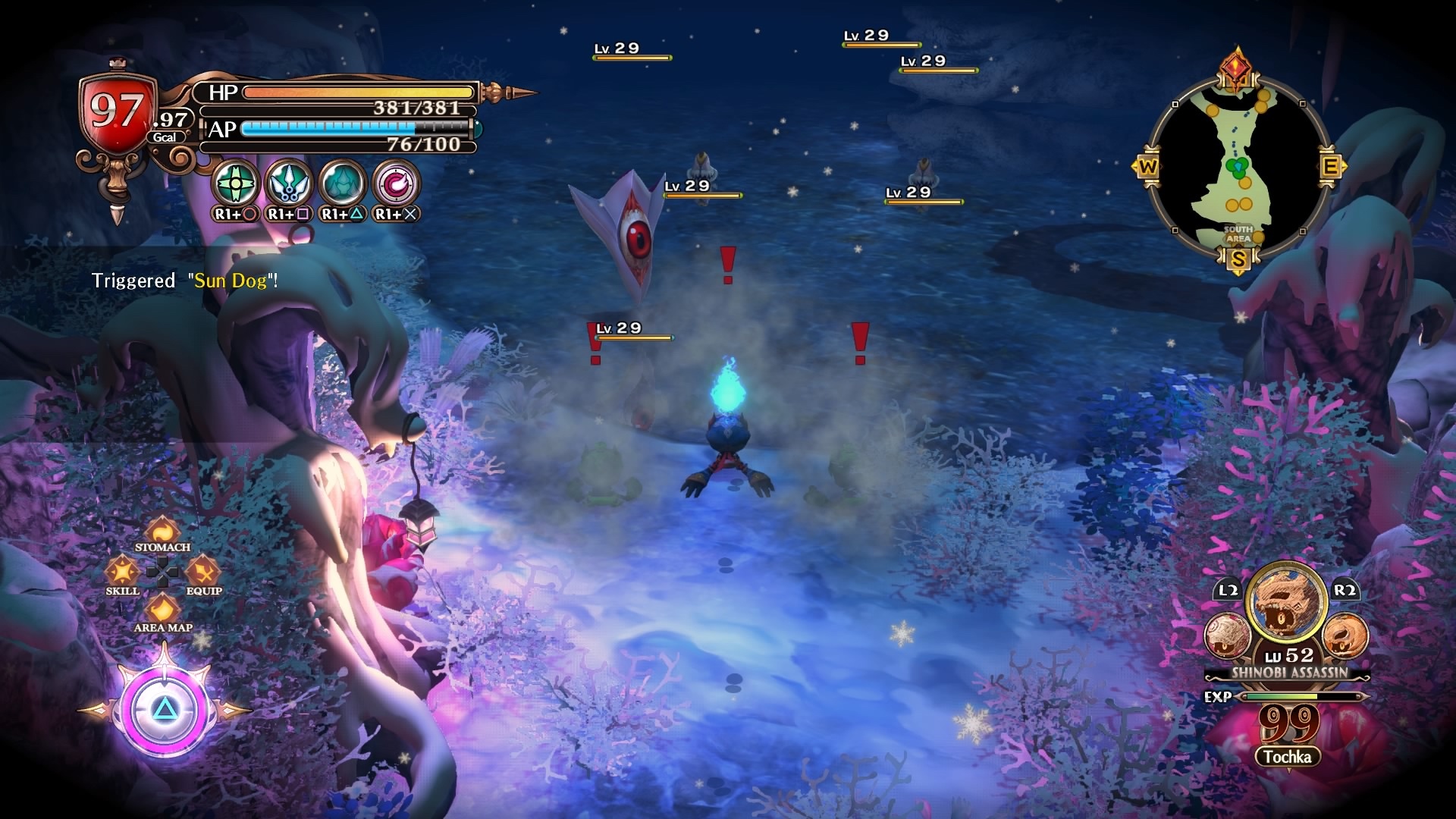 As well as this you unlock a hub for your adventure, Durga Castle. The main feature of it is Krafting where you can upgrade weapons by giving them EXP by destroying other equipment, and later by giving them crystals that can add effects. Equipment comes in varying levels of rarity: common, rare, epic and legendary. This doesn’t just relate to their base stats – the rarer they are the further you can upgrade them. Mana is also required for the process but I would fight most enemies I came across so had more mana then I could spend. Often I will overlook crafting in games but I decided to get my head around it for this one which was good for my playthrough but highlighted a major flaw with this game – balancing.

I found many epic and legendary versions of every type of weapon very early in and through a very small amount of grinding I was able to get enough material to make my weapons extremely overpowered. Making a legendary hammer extremely powerful made it so I didn’t ever have to worry about elements and facet types and instead would just beat enemies with sheer power as opposed to strategy. This also made bosses incredibly easy, I never came close to dying even on some of the later battles.

Usually having a lot available is a good thing but there is so much to keep an eye on and it often feels more like a chore. As well as this you can also completely avoid certain features by just pumping upgrades into your weapons. There are even more things that get unlocked as you continue but I’m not going to go into anymore details as they’re causing this review to become just as bloated and cumbersome as the game is.

Becoming overpowered made fighting enemies feel pointless, there was no real reason to keep going other than the story. Unfortunately this is one of the other major downsides. Not only is the plot boring, the characters are very annoying. There’s quite a bit of swearing throughout, which isn’t an issue so much as it is an indicator of how shallow the characters are – instead of interesting developments you just get swearing and bad jokes. It’s not even that the game has too strong an anime feel to it, it goes over and beyond and becomes a particularly bad caricature of itself. I found myself becoming detached from the story very quickly to the point where my mind would just go elsewhere during lengthy cutscenes.

The graphics are also rather uninspiring and although there are a lot of colours on show they manage to make it look really dull and dreary. The world map and individual screens are incredibly boring, and if that wasn’t bad enough it’s really hard to tell what is happening. The camera is sort of set behind everything so the background often gets in the way. There is an effort to make obstructing scenery translucent but you just get left with a cramped screen which is exacerbated by the crowded HUD. Some enemy types, such as spiders, are also incredibly small and hard to see other than the jarring health bars they have next to them – which doesn’t work as an indicator as there’s no lock on. To make matters worse enemy types are very limited, it won’t take you long to become fed up of beating up countless flowers, mushrooms and other bland baddies.

There’s still plenty more I could talk about here but in the end you have a game that doesn’t offer a great deal of enjoyment in either the storyline or the gameplay. Fans of the first will feel right at home, but I’m not sure if that’s a good thing.