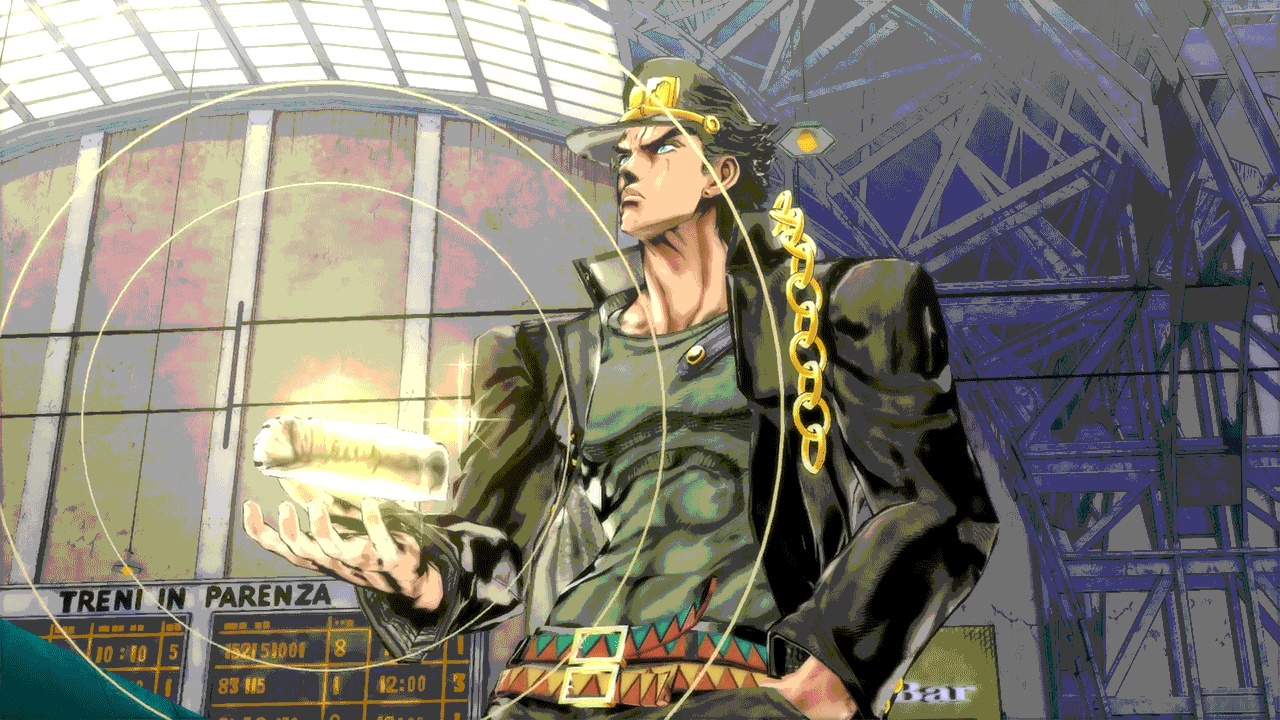 After the successful launches of Naruto Shippuden: Ultimate Ninja Storm 4 and One Piece: Burning Blood, CyberConnect2 and Namco Bandai have successfully cemented their position as the masters of the anime/manga brawler with the release of the brilliantly bonkers, JoJo’s Bizarre Adventure: Eyes of Heaven. Another in a long line of accessible, entertaining and genuinely gorgeous team fighters, Eyes of Heaven, while perhaps lacking the polish and scale afforded to, Ultimate Ninja Storm 4, nonetheless remains a brilliantly crafted fighter that is fundamentally solid enough to be enjoyed by fans of the genre but with enough fan service to keep even the most ardent of Jotaro Kujo aficionados happy.

Beyond the combat that naturally provides the core of the experience, it’s the story, penned by series creator, Hirohiko Araki that really sets this game apart. While a tough sell for those new to the series, the eccentric nature of both the cast and the storytelling ensures that there is something here for even the greenest of JoJo newbs. Following the events of the Stardust Crusaders storyline, Eyes of Heaven continues on from the defeat of series stalwart, DIO as Jotaro and friends are attacked by friends and enemies previously presumed dead. This leads to an adventure taking in all 8 parts of JoJo’s Bizarre Adventure as you meet, and ultimately fight, characters from across a wealth of locations and timelines. As I said, it’s all rather bonkers, but with such a unwavering commitment to the peculiar nature of the narrative, I for one found it hard not to get caught up in Eyes of Heaven’s brilliantly barmy narrative.

Still, as fun as the story might be, it is ultimately the combat that must take centre stage, and so it does with mostly positive results. A team-based brawler, like the other CyberConnet 2 releases of this ilk, the fundamental mechanics are incredibly basic with light and heavy attacks combined with character specific special moves to create the simple but surprisingly nuanced core of the experience. Throwing together special moves or even team-based, ‘Dual Combos’ is a very straightforward affair with skill invariably coming from knowing when to use your special abilities, dash capabilities and buddy-based attacks. You’ll also need to consider how to best use the different battle styles of the 50 plus fighters e 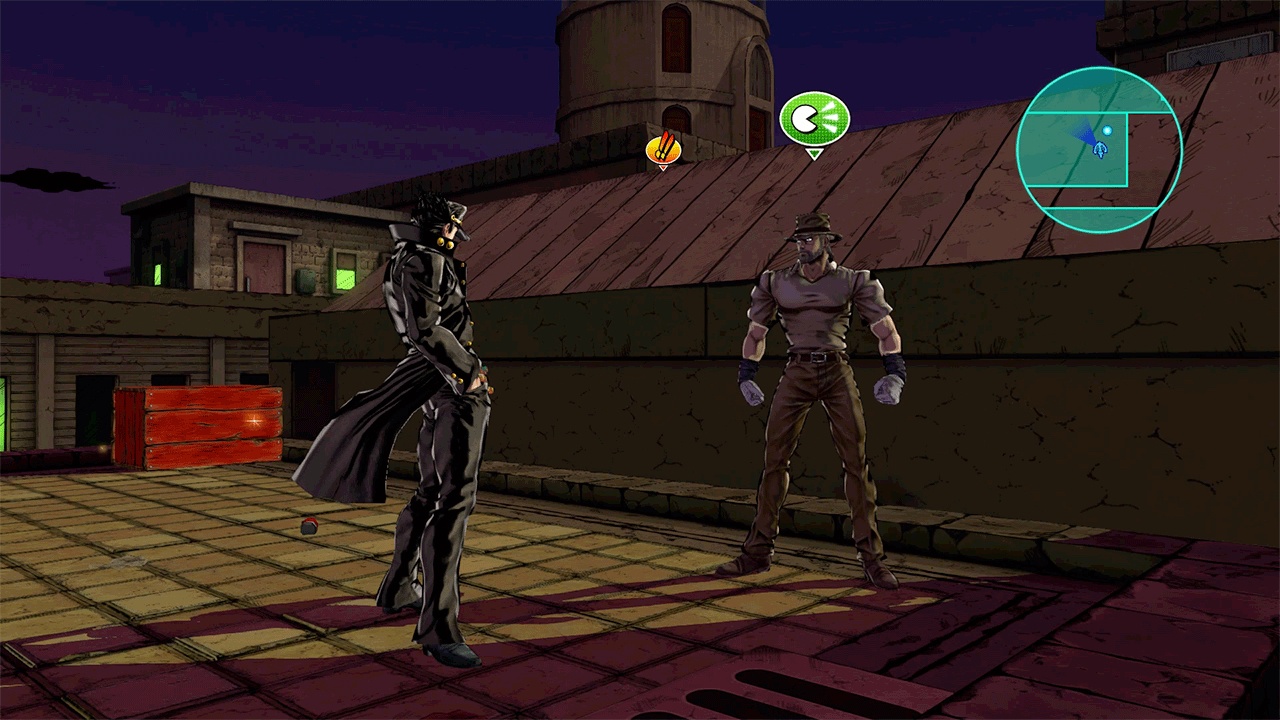 Sure, you might get away with more simplistic combos on the basic difficulty settings, but crank up the difficulty or, God forbid, take the fight online (an unsurprisingly unforgiving battlefield), and the nuances of combat soon become extremely apparent.

As enjoyable as the combat might be and as varied as the roster undoubtedly is, the combat system is not without its issues. For one, the stages, while certainly diverse and easy on the eyes, are often home to strange drops that are often tricky to navigate and subsequently take all of the pace out of combat as you wait for your fighter to re-spawn after a fall into the virtual abyss. The same is true of when a fighter in knocked down. While lying on the floor, they are usually impossible to attack as both the attacker and attacked have to wait patiently for the combatant to get back to their feet. It’s not game breaking stuff, but like those poorly designed drops, these moments do take all sense of momentum out of the battle.

Despite these issues though, Eyes of Heaven’s battle system is great fun with the character specific special moves all looking great and the Dual Heat Attacks proving especially enjoyable. Time these right, and you can even end up with any number of ‘Dramatic Finishes’ (finishing strikes that look and feel like they have come right off the pages of the manga). 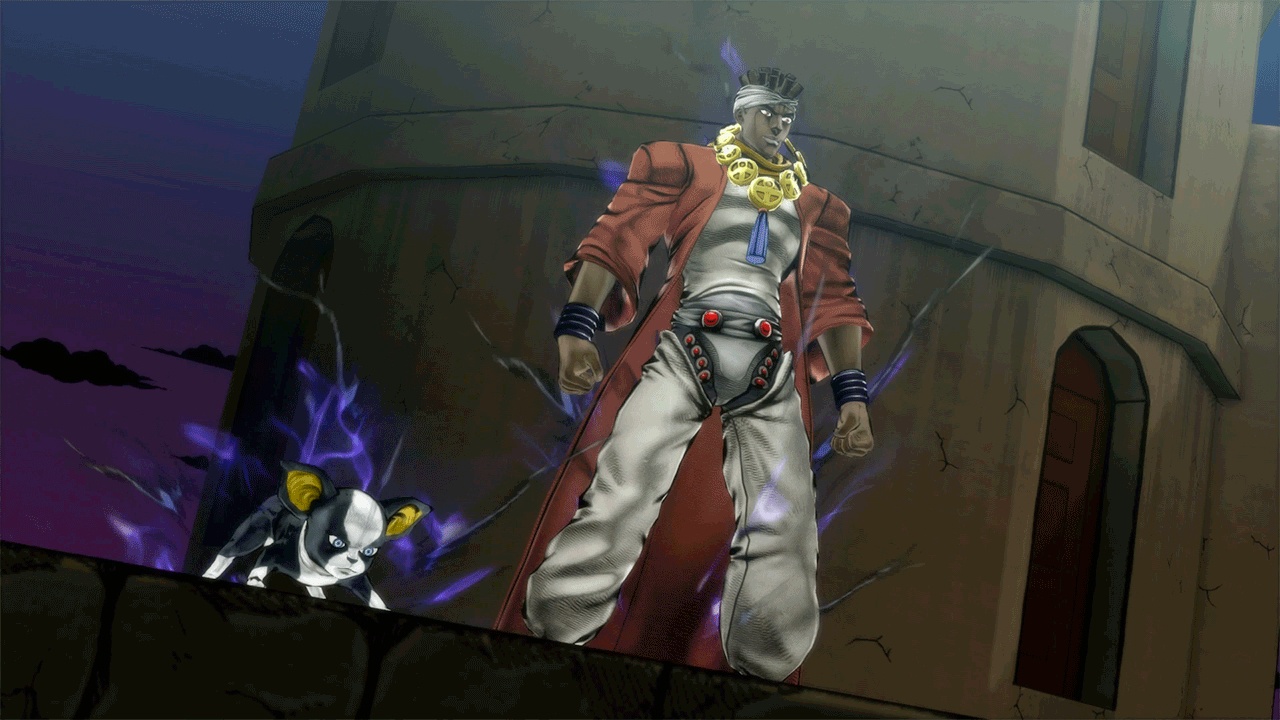 Between battles, you will often be given a small area to explore in which you are able to interact with characters, check through the myriad of customisation options or go back and replay previously fought battles. Whether these areas are actually of any use is up for debate, but as an almost interactive menu screen, I felt that they added a bit of character to an already character-rich experience.

It’s not without its rough edges or its share of strange design choices, but for the most part, JoJo’s Bizarre Adventure: Eyes of Heaven is a hugely enjoyable brawler that makes the most of its striking source material thanks to its great writing, beautiful cel-shaded visuals and wealth of fan-friendly content. The combat system might not be the deepest around, but it serves the tone of the game brilliantly and makes for an accessible and extremely entertaining experience. Those looking for a challenge can take the fight online, but for the rest of us, Eyes of Heaven’s gentle learning curve proves a fine accompaniment to this undoubtedly bizarre adventure.