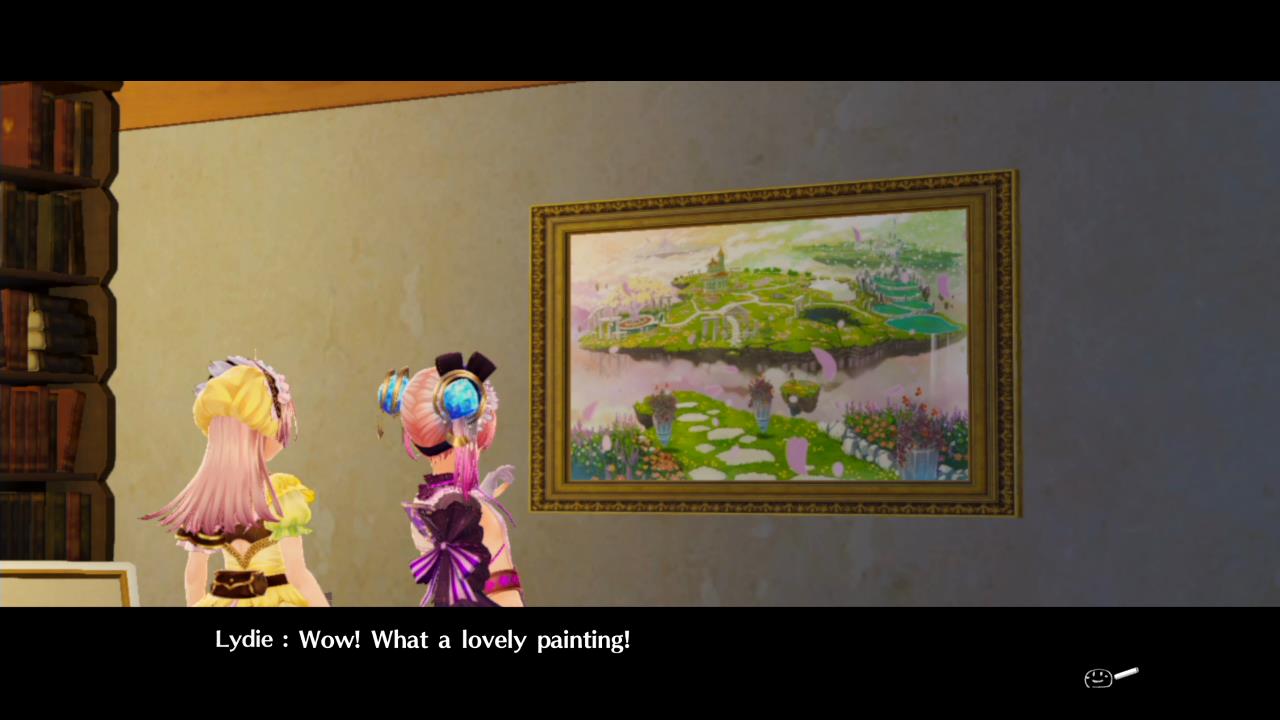 Over the last twenty years, the Atelier series has enthralled its fans with its cutesy-charms and light-hearted Japanese role-playing mechanics. Now, with the release of Atelier Lydie & Suelle: The Alchemists and the Mysterious Paintings, a game developed by Gust and published by Koei Tecmo, the series continues with its nineteenth iteration and the third and final game of the ‘Mysterious’ sub-trilogy. However, if you’ve never played any of the previous games within the series, then don’t worry, as this latest outing of the long-running series is so easily accessible that it, not only, offers the perfect place with which to start your journey into the world of alchemy, but also provides a welcome return for the fans of the long-running franchise.

The Alchemists and the Mysterious Paintings takes place four years after the setting of Altelier Firis: Alchemist of the Mysterious Journey, the previous Atelier game which saw a release last year on the Playstation and PC platforms. This new outing focusses on the story of Lydie & Suelle, two young twins and novice alchemists, who dream of running the best and most popular atelier in town. The two girls live with their father, Roger, who still struggles with the loss of his wife and the two girls’ mother. Lost in his grief, the hapless father fails to live up to expectation with the upkeep of his atelier and the well-being of his two daughters. Left to fend for themselves, Lydie & Suelle work together to perfect the arts of alchemy in the hope of turning their dreams into reality and honoring the memory of their late mother.

One of the drawing attractions to this series of JRPG’s, is the element of its storytelling. There’s no kingdom to save, evil tyrant to depose or magical quest on which to embark. Instead, the Atelier series focusses on personal goals and ambitions through the use of alchemy, a form of magic in which you combine ingredients in a cauldron to produce items that can be used, either in battle, or to rank up in levels that further progresses the story. This element of gameplay is still very apparent in The Alchemists and the Mysterious Paintings as the town of Merveille, where the two girls and their father reside, introduce a ranking system to determine the capabilities of the alchemists that live there. By fulfilling a set criteria within the art of alchemy, the opportunity to take a promotion test opens up which further increases the level on which you rank within the town’s system; thus producing a more successful atelier. 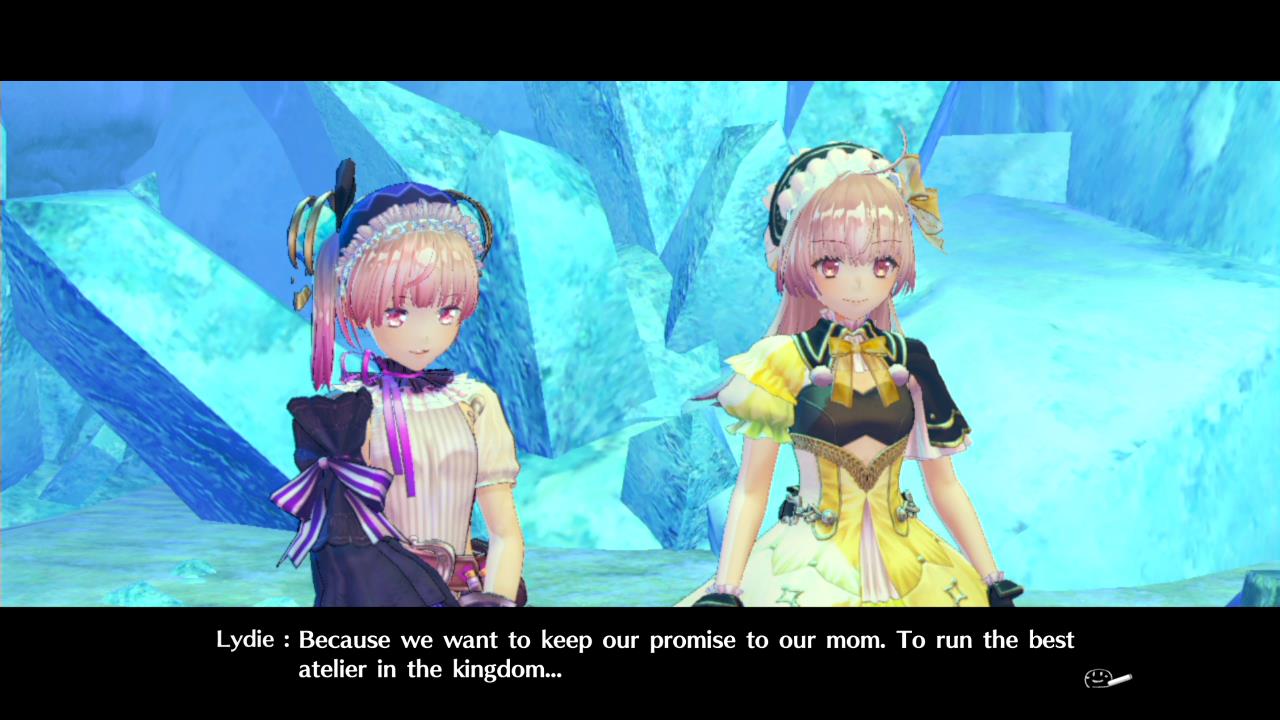 This is the basic premise on which the games mechanics work. However, there is a lot more depth to the gameplay which makes the whole experience an absolute joy to play. The main elements comprise for the need to create items and explore the world around you in order to find the necessary ingredients. As well as this mechanic to the gameplay, you can fulfil certain side-quests from the town’s notice board, which rewards you with ingredients and coll, the game’s currency, interact with various NPC’s within a variety of shops and the town itself and fulfil a series of tasks as set out within the Ambitions Journal; an instruction booklet that pushes the story forward with your progression up the atelier rankings table. This journal becomes an important aspect to the gameplay as, with the discovery of a set of mysterious paintings, both Lydie & Suelle are transported to worlds within them, offering the pair a whole new set of unique ingredients to help them create new items towards their journey of creating the best atelier in town. The further you progress within the town’s rankings, the more paintings that open themselves up to you, thus expanding on what the game has to offer.

As well as investigating the different districts within the town of Merveille, you can also explore the regions that surround. These areas offer an abundance of ingredients that can be easily found under the highlighted sparkles that protrude from them; even if you are seeking a particular ingredient, this exploration never becomes a chore with endless searching, as everything you seek can be easily identifiable. Each of the mysterious paintings also offer a similar level of exploration and ingredients. However, with each painting portraying a certain theme, the lands within them follow a similar setting with locales such as a spooky Halloween land, an ice palace and even an underwater setting. By unlocking each of these locales, you strengthen the abilities of both of our young alchemists as they synthesize their unique ingredients on their quest to advance from an ungraded ranking up to the ultimate goal of an ‘S’ rank.

As well as offering vital ingredients, all of the game’s settings are also inhabited by a variety of monsters. This also brings another important element to the gameplay with the battle system. Using a turn-based mechanic, you and your allies take turns with enemies in activating attack moves and unleashing special skills. Using a three-tier system, you can utilize three pairs of allies, two in a forward position, two in support and two at the rear. Taking control of the front pair, the other supporting characters use an auto ability to further enhance your standings on the battlefield. Using follow-up skills and stand-in defence, you have the ability to produce combination moves that sees your party working in unison, especially with the new battle mix; an ability to synthesize alchemy items on the battlefield. Although this turn-based strategy follows a similar mechanic to battle systems found in other RPG titles, these new options to the Atelier format provides a bit more variety to the way you approach each battle. 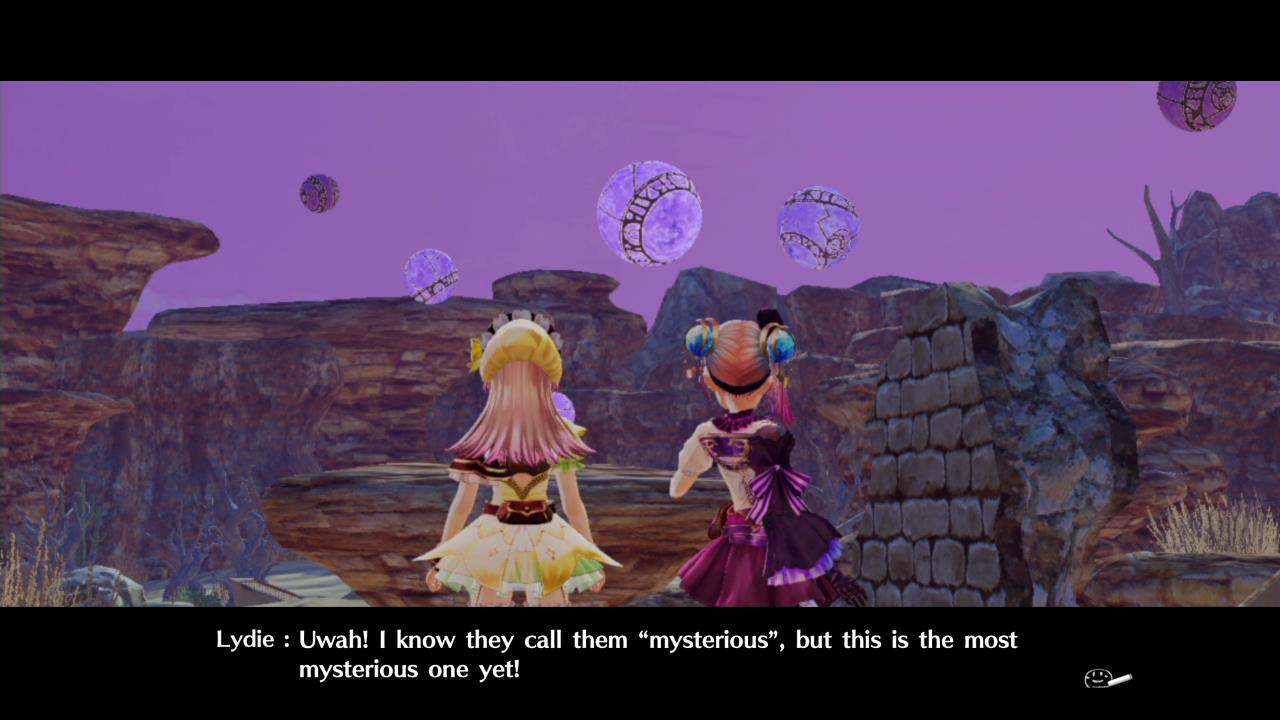 Graphically, the game offers a very pleasing aesthetic with its anime-style presentation and wonderfully cutesy soundtrack; something which can be customisable with further soundtracks from past titles. Each of the game’s locales are bright and detailed which blends seamlessly with the variety of cut-scenes that gives Atelier a feel that is easily on par with a high-production television or film presentation. Be warned though, this game retains its original feature of a Japanese voice-over with English subtitles, rather than a western dub. It doesn’t take anything away from the game and actually adds to its charm, although I do know that some people aren’t particularly fond of this style of presentation. Whereas previous titles offered a freedom to fully explore an open world setting, this new episode contains a much more streamlined experience. Although the option is there to travel to each locale on foot, albeit in small sections that frequently pause while loading new areas, the game encourages you to utilise a fast-travel system. This may be something that fans of the series find particularly detrimental to the gameplay. However, by incorporating this system it makes the game more easily accessible, particularly to anyone that has never experienced the joys that this game series can offer.

This is one of the wonderful things about The Alchemists and the Mysterious Paintings. Despite the depth of its gameplay and mechanics, everything that the game offers is easy to understand and follow, making it an ideal entry point for first time alchemists or people wishing to experience their first furore into the world of JRPG’s. Everything from exploration, synthesis, battles and navigation is all done with such ease that it simply becomes a pleasurable and very stress free experience; it even contains a fully digital instruction manual that can be accessed from the in-game menu to provide a full explanation of all its mechanics. Despite its simplicity of gameplay and ease of use, the need to pay attention to detail is vital to fulfil the highest potential of your alchemistic skills, particularly with its colour-matching mechanics during the synthesis of components that produces better quality items.

Unfortunately, this Switch version of the game does contain a couple of performance issues. On a couple of occasions, particularly where a lot of action is taking place on-screen, the framerate struggles to keep up with the pace and a few graphical glitches, mainly during the battle sequences that involved disappearing enemies, reared their ugly heads. However, these instances were very rare and particularly few and far between. Although the game contains these very minor flaws, they shouldn’t put you off from experiencing what this game has to offer. With its charming presentation, ease of use and, arguably, one of the strongest stories within the series, Atelier Lydie & Suelle: The Alchemists and the Mysterious Paintings is one of the finest examples of a JRPG available today; this is particularly so upon the Nintendo Switch, on which this version of the game was reviewed. It offers a calming and relaxing experience, but still retains an air of excitement that draws you in with its progression system that runs concurrently with its superb story. With its alchemistic themes, this is a title that contains a certain magic within its ingredients that will leave you spellbound.