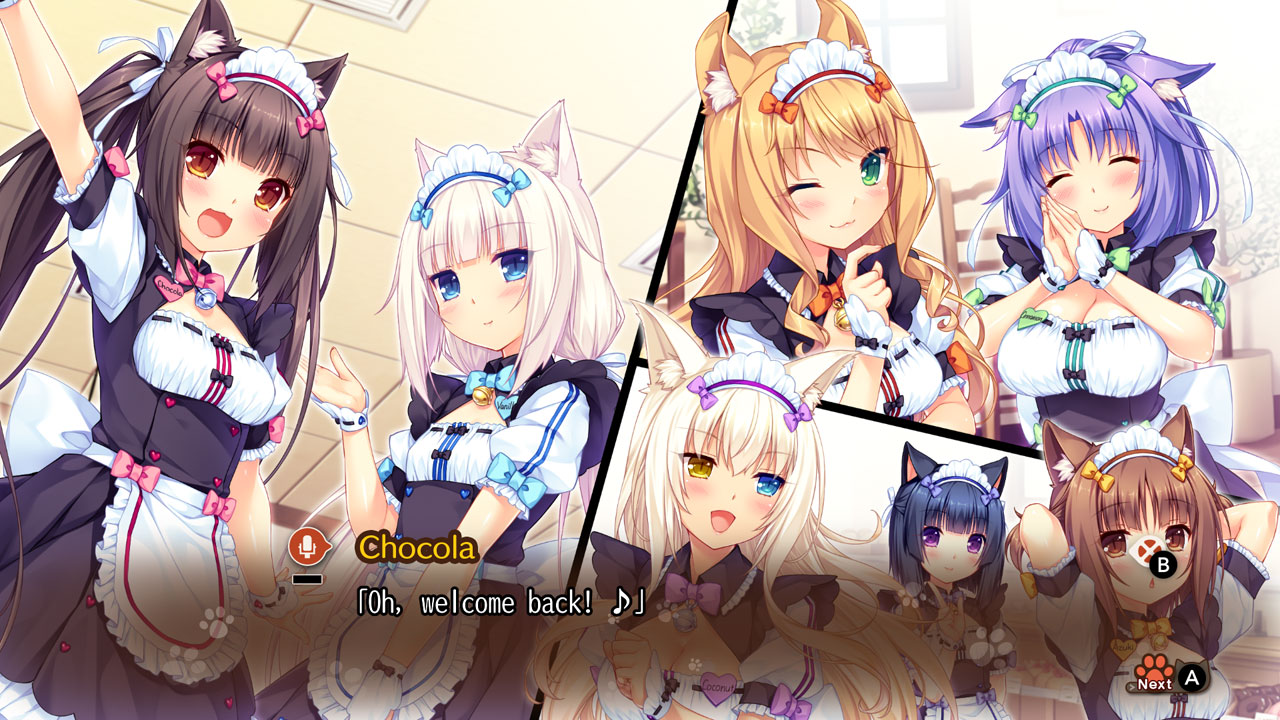 It’s sincerely hard to tell if Neko Works, the developing mind behind the Nekopara series, is either incredibly cunning or completely, willfully ignorant of their demographic. Anyone worth their salt understands that the Nekopara series exists in the real world, the “direct download to your PC with the lights off” world, and is wildly successful there because, hey, catgirls. Yet, at the same time, they continue to soldier on with their games, creating title after title in this universe that does its best to explain, expand and ensnare players for another trip back to La Soleil. And they sell well, even on platforms and places where extremely adult content is expressly forbidden. In any case, there’s a wink and a nod as this latest Switch port is being released on Valentine’s Day, and we turn the page onto Nekopara Vol. 2.

Nekopara Vol. 2 takes place shortly after the events of Vol. 1 conclude, but it’s not exactly clear what length of time has passed. The cafe is booming, business has never been better, and Kashou (the voiceless male lead) is basically watching contently as the business is run by his little sister Shigure (who insists on wearing cat ears to match the other workers) and six cat girls who run all the ins and outs of daily operation. In the course of the opening setup, we see that we are going to focus primarily on two cats who joined us towards the end of the final chapter. Each fufills specific anime tropes, so buckle in if you weren’t ready for common element overload. The first is Azuki, who is the oldest of the cat girls that were raised at Kashou and Shigure’s familial home. She is somewhat a bossy leader, being the oldest and whatever, but is also one of the shortest of the catgirls, which leads to hilarious zingers and tags. Coconut, the second cat girl of note, is the tallest, third youngest, and probably the most well endowed because why the hell not. She’s got a bit of a lazy streak and is constantly butting heads with Azuki. After a small argument develops into a full-fledged cat fight, things between Azuki and Coconut are cold, and ideas must be reconciled. Shigure, as fate would have it, needs to take Chocolate and Vanilla (the two primary cat girls from the first volume) out to get their bells renewed (think of it like a cat girl certification test) and this leaves Kashou to help Coconut and Azuki sort out their feelings and ideas by himself. You might be able to tell where this is going, but, if not, a lot of crazy stuff happens off camera. “I’m dating two cat girls now” kind of stuff. 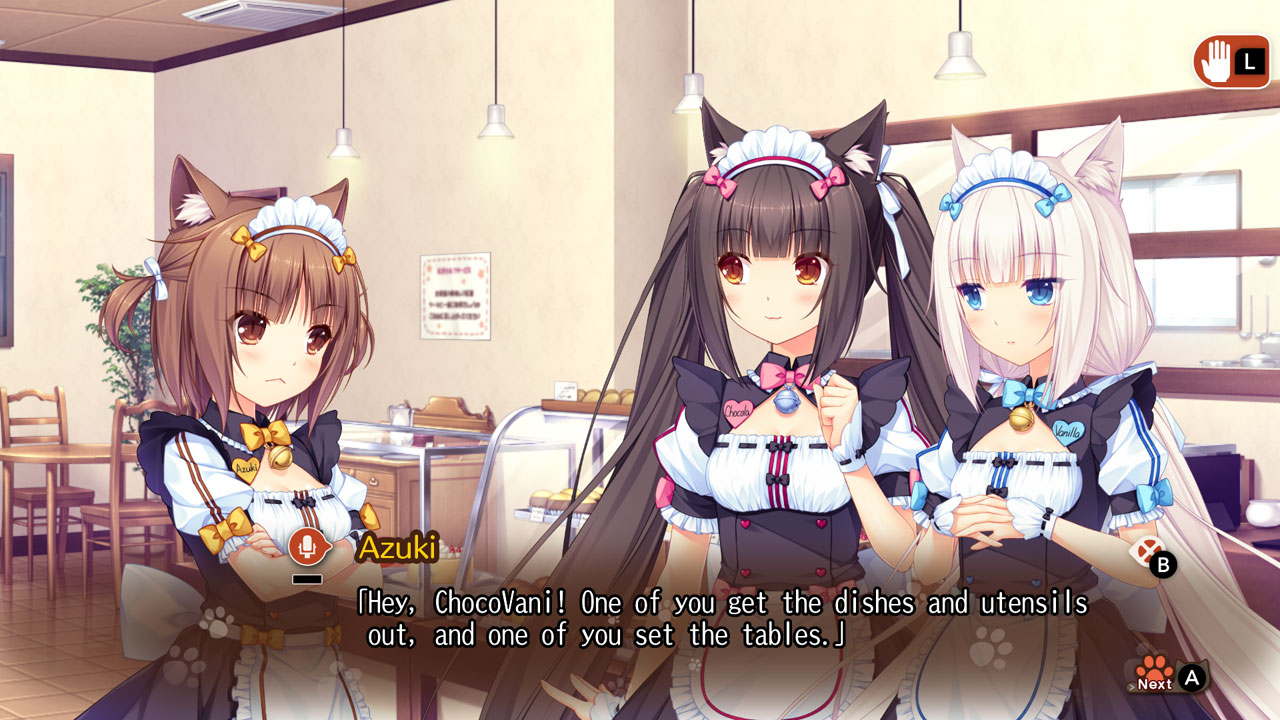 Right out the gate, we can simply slam the gate shut and tell anyone who’s overly eager that there is no overtly adult content in the game. Despite what the warning system suggests, there’s no nudity of note anywhere in the game. Cleavage is on display constantly, there’s tons of innuendo, a lot of stuff is implied to have happened overnight and when characters suddenly come home to find other things happening, but you never see anything. CFK and Neko Works continue to do a great job of chopping up their visual novels and redistributing things correctly so you aren’t left utterly confused as to what happened when we blinked. Instead, some stuff is hinted at, and the rest you sort of need to fill in the blanks with. Longtime fans will know that NekoPara Vol. 2 does suffer a bit more from the sex scenes being completely removed, as actual character dialogue and development occurs in the heat of the moment, but it cannot be helped. Nintendo’s getting more risque with their works, but we aren’t ready for human/cat girl threesomes.

Instead, you’re left with something that’s actually a very enjoyable, almost episodic version of what happens in the world of cat girls. If Nekopara Vol. 1 was the successful pilot that got this entire project greenlit, Vol. 2 is a chance to see if the idea has legs beyond a one and done mentality. And, in many ways, it does. The game is still heavy into cat sound puns and some incredibly suggestive dialogue, but the whole idea holds weight as we move forward and we see Kashou genuinely try to help the whole of La Soleil work in harmony and happiness. He attempts to show the cat girls how to bake, how to enjoy a nice dinner out together, and how to clean custard off someone’s fingers without getting too suggestive. If I’m being 100% honest, this one feels like it’s far, far deeper into the “relationship hunt” territory than the previous game, but that’s mostly because Azuki’s emotional turmoil takes over a fair amount of the plotline. Still, it’s well presented, simply because it’s a decent role reversal from how a lot of harem dating games go. Kashou isn’t actively pursuing the cat girls, they just sort of gravitate towards him, and everyone seems super receptive and happy when he creates another connection with another catgirl. Including his sister, who is overly interested in getting a lot of attention from her big brother. 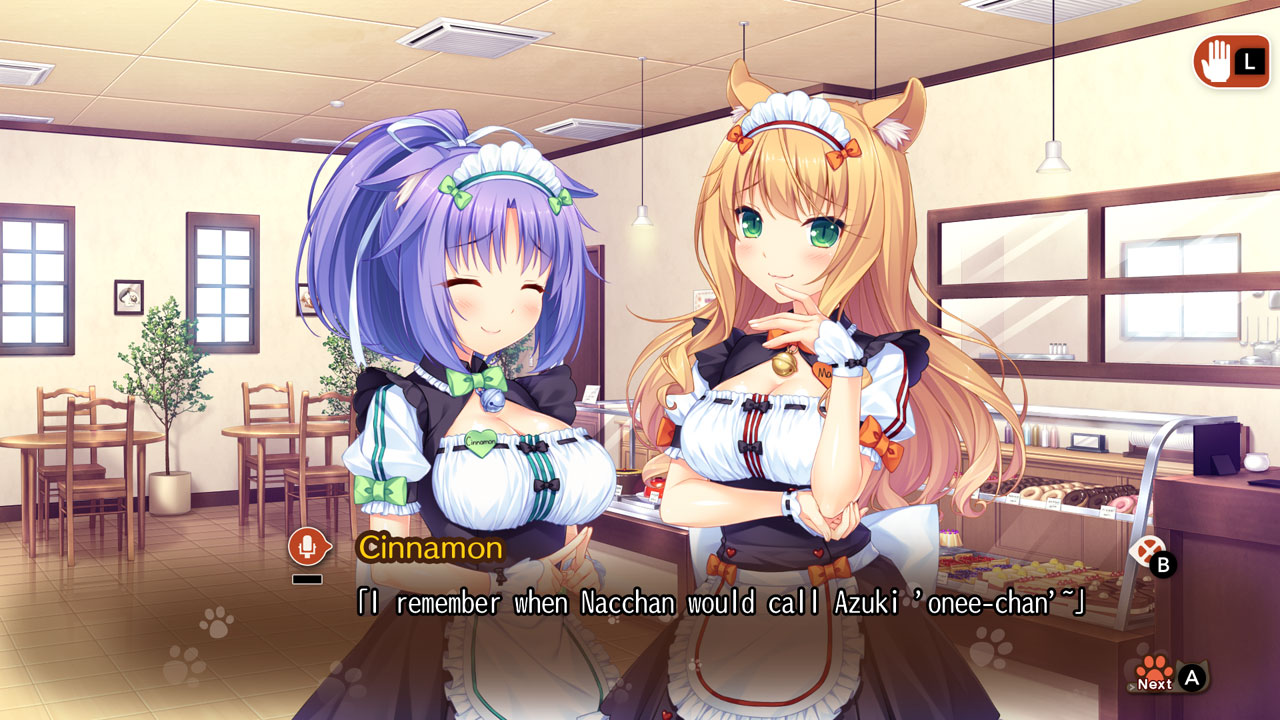 Visually, Nekopara Vol. 2 has a great graphical overhaul from the PC version, and also contains a few surprises. Firstly, the petting motion is still included for every scene, and contains different reactions from each cat girl depending on where you pet. I leave it up to you to decide how far you go with that because I honestly don’t have time to grope every anthropomorphic kitten in a maid costume, and there are a few. These additional controls also include a fantastic quick save/quick load that’s tied to the right joystick. It helps for moments where you want to quickly save and hide your Switch, or go back because you’re pretty sure you misheard the character. Secondly, the graphics are legitimately an HD upgrade, looking sharper, clearer and cleaner on the Switch than the original PC release did. Lastly, and this is a big one, Nekopara Extra, a prequel that’s shockingly recent, is available for play after you conclude the main storyline. Extra, much like Vol. 0 that was hidden on Vol. 1, gives a good amount of back story to the cat girls, specifically Chocolate and Vanilla, and can either add or detract from your game depending on how you mentally attune to it. I personally liked it, because it added a certain element of adjustment that you don’t really see in the main games. You forget that Chocolate and Vanilla were adopted separately and had to learn how to interact with the others. Ironically, this extra on the game that focuses very little on those two cat girls adds so much more to their personalities.

When it comes right down to it, Nekopara Vol. 2 is pure waifu gameplay with a very thin, very transparent veil over it. I think Shigure says it best at the beginning where “our cafe gets very popular with all the photos I upload, but i can’t understand why!” The game tries SO hard to be innocent of its own success, and you benefit from playing into that innocence. If you just think that everyone wants to screw, then a certain charm and cuteness flies right out the door and you’re left with a neutered, frustrated cat. Instead, you play into the blissful doubt of it all and can get further, enjoy more, and process the development of things as they come as true affection and love blossoming in an unlikely place. It might not be the romance of the century, but it’s cute, it looks great, and there will be fans who will happily grab this for the Switch. However, I imagine those same fans also wish Nintendo would hurry up and add folders to tuck this away safely with the other chapter of Nekopara for a different day of reading.

Because what better title is there to release on Valentine’s Day?