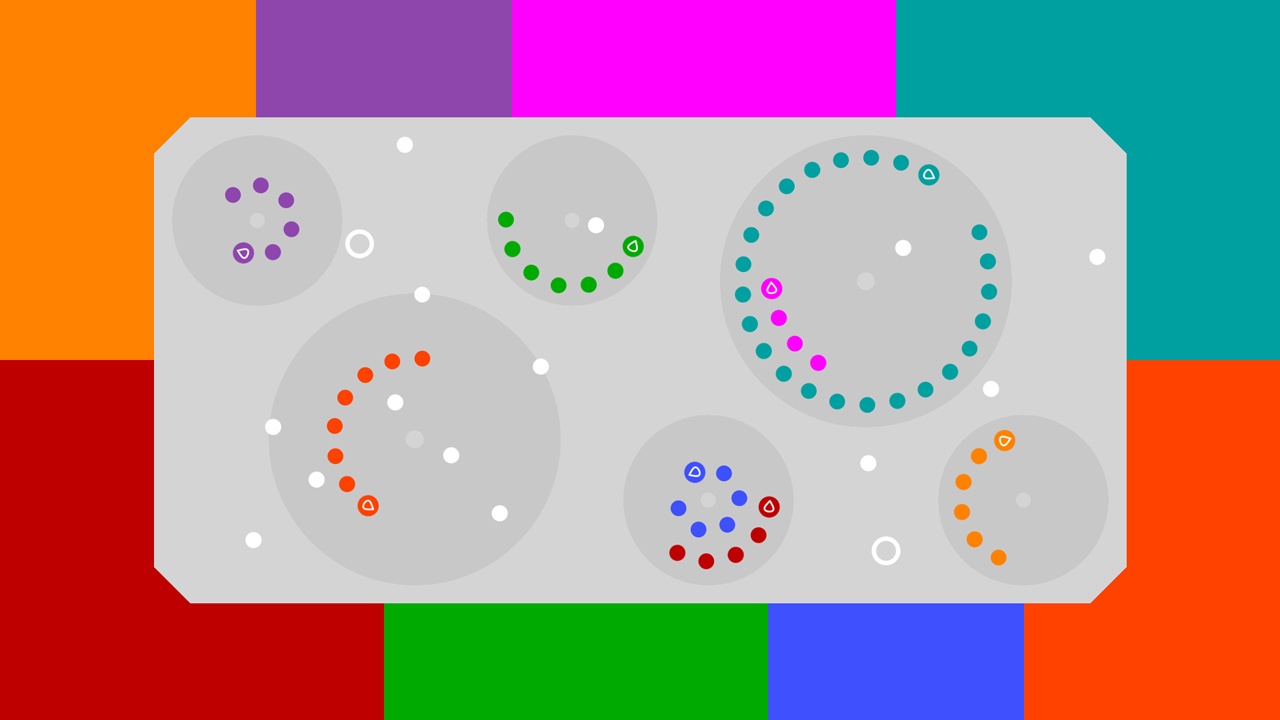 One person development teams are always damn impressive. We all have dreams of creation and success, and very few of us chase those ideas to fruition (gonna finish that book ANY day now). Things like itch.io, Steam Greenlight and even Newgrounds were fantastic stomping grounds for people to hash out their ideas and try to bring them to the masses. So to see a smaller indie get enough attention to then inspire the developer to bring the game to the Nintendo Switch is pretty amazing in and of itself. But then to have the game actually be a lot of fun and have some good replay value? That’s a damn unicorn right there.

12 Orbits is a multiplayer arena/sport game that boasts a ridiculous 12 people who can play at the same time. The idea is that you use a single button to control the movement/action of a small, colorful orb that is assigned to each player. In a variety of levels and styles, the controls boil down to a single idea: reaction. As you bounce around the screen, you push your one button in order to rocket forward and dodge whatever is in your way (other players, obstacles, etc.). At the same time, the singular button also allows you to enter and exit orbital paths that are set up around the screen. These orbits are the only way to have any control of the direction you’re going other than to just careen off the walls with reckless abandon. You may have thought I’ve left out an important detail. You would be wrong: one button, survive. 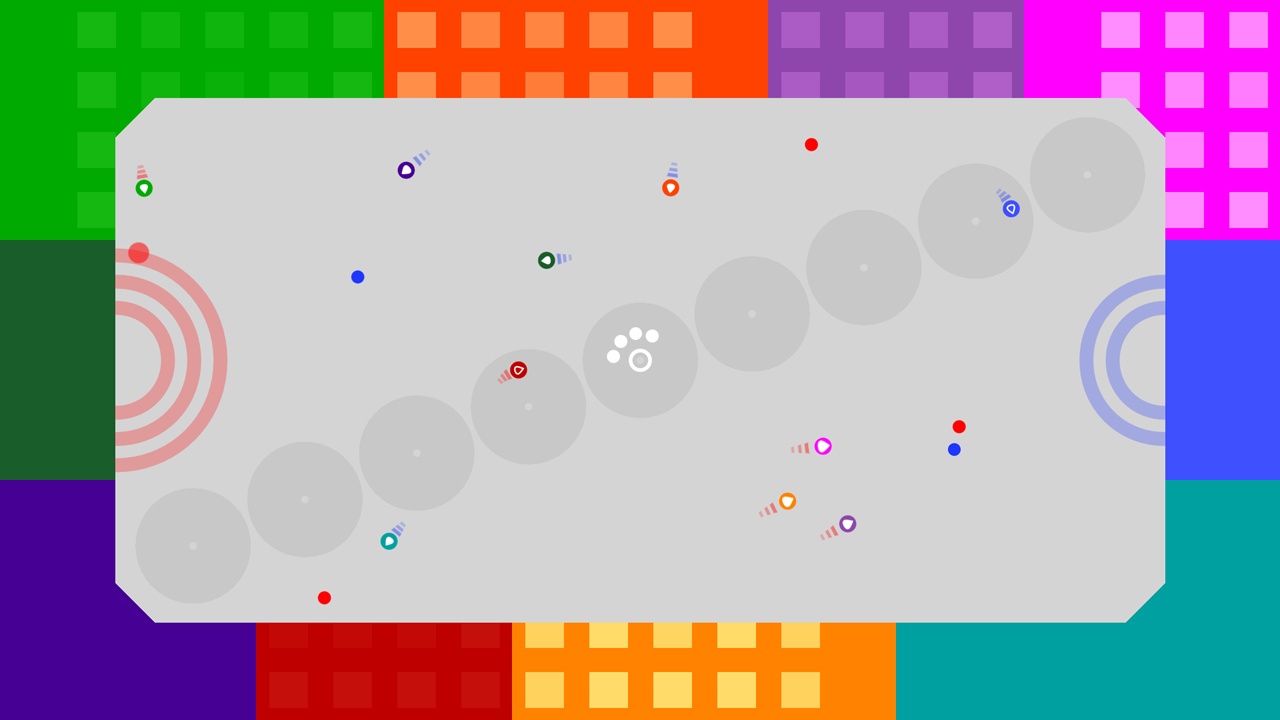 At the core, 12 Orbits is, inherently, an enjoyable experience. For two or three players, it’s pretty perfect: there are a ton of different locations and arenas, and you are able to modify nearly every stage to meet some different kind of conditionals. That is, instead of playing for points, you can do a King of the Hill variation, or even some kind of massive centipede-type competition where you grow larger with each ball/opponent consumed. With only about seven kinds of game types available, it seems like it could grow stale quickly, but I really enjoyed repeating over and over with small differences. Between the level and type mixes, there are quite a few combinations to enjoy, not to mention each combo is dependent on the number of players. Doing Blizzard in The Ring is going to be different depending on four or eight players.

Aesthetically, 12 Orbits is fantastic from the bottom to the top. With colorful, sharp choices for each of the spheres, you’re able to differentiate all of the players and the affected balls they touch easily. There is very little confusion as long as you stick to personalized strategy, i.e. remembering what color you are. If you’re busy keeping an eye on other players, it’s simple to get mixed up, think that you’re vermillion instead of blue, and then crash into an opponent and lose. There’s even a good solution for the colorblind, which I would recommend enabling anyways: it emblazons your piece with a symbol, but doesn’t turn off the existing color, so it basically makes everything more interesting. All of this colorful chaos is set to some incredibly choice and upbeat electronic music, which our solo dev, Roman Uhlig, has taken, with credit, from some great creators and composers. That’s something that I really, really enjoyed: the first splash screen that you see everytime is a Thank You page to everyone who contributed, either sound effects, music or otherwise. It’s incredibly humble of Roman, and I appreciate the hell out of it.

Sadly, the biggest draw of 12 Orbits may also be its greatest downfall. With a single button approach to play, the idea is that upwards of four people can all crowd around the JoyCon and use a finger to help get the game going. Or, in another situation, players can also set up to control the entire game with the touchscreen; 12 fingers, all on point. This is a delightful concept, but the execution is really tenuous. The touchscreen approach, ironically, seems like the better one, as it was simple to tell my kids to only push the colored block that they had set up. Sure, the screen is small, and I’m trying to imagine twelve people all crowded around the Switch like it was a backyard game of dice, but it’s possible, and the performance of 12 Orbits doesn’t leave any stutter. Twelve hands, one screen, I could see it happening. 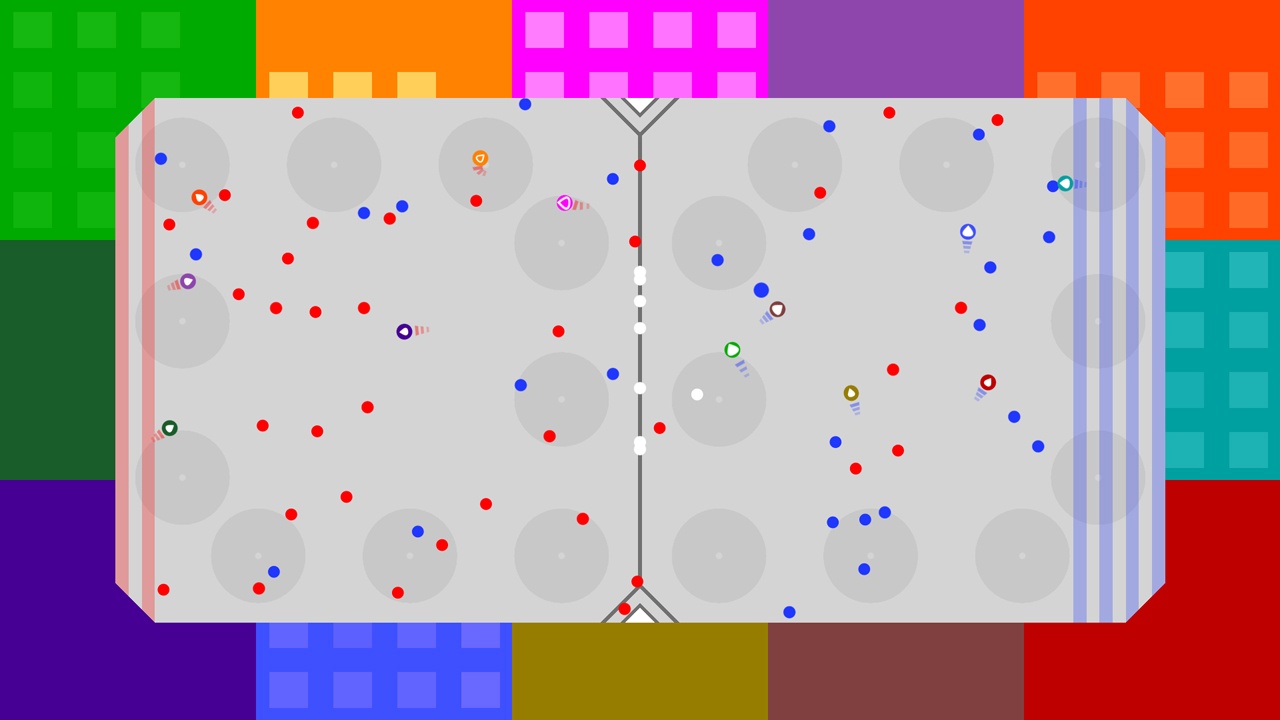 Now, on the other hand, try to imagine four people all around a single JoyCon in order to play a game up on the screen. It’s abhorrent. The strike zone for everyone is within a couple of millimeters of another, and no one is able to properly decide on a grip pattern that makes this work. I mean, conceptually, yes, there are four buttons, so four people can push them, but it’s so crowded that it simply seems deeply unpleasant. Your best bet is to assign two people per JoyCon and just have a couple sets on hand, or even a couple 3rd party controllers that map well. As long as there’s enough real estate that players don’t have to sit on top of each other, this is doable, this is plausible.

12 Orbits is a wonderful vision that’s been brought to life, with the best of intentions, on the perfect console for multiplayer party games.  I love the fact that this single person team has not only ported the game to the Switch, but has put in the effort to make it more accessible to the potential players AND kept it at the same price as the Steam release. Everyone and their mother complains about price hikes for Switch ports, but let’s be honest: it’s extra work to bring the games over. They have to buy the dev kit and sometimes recode from the ground up. I don’t know how hard Roman worked on this, but he’s decided to keep it the same cost, and that’s admirable. As long as you have friends and controllers, 12 Orbits is a grand time to have. If you’re single player, though, or insist on four buddies using one JoyCon, you may go spinning off into space.