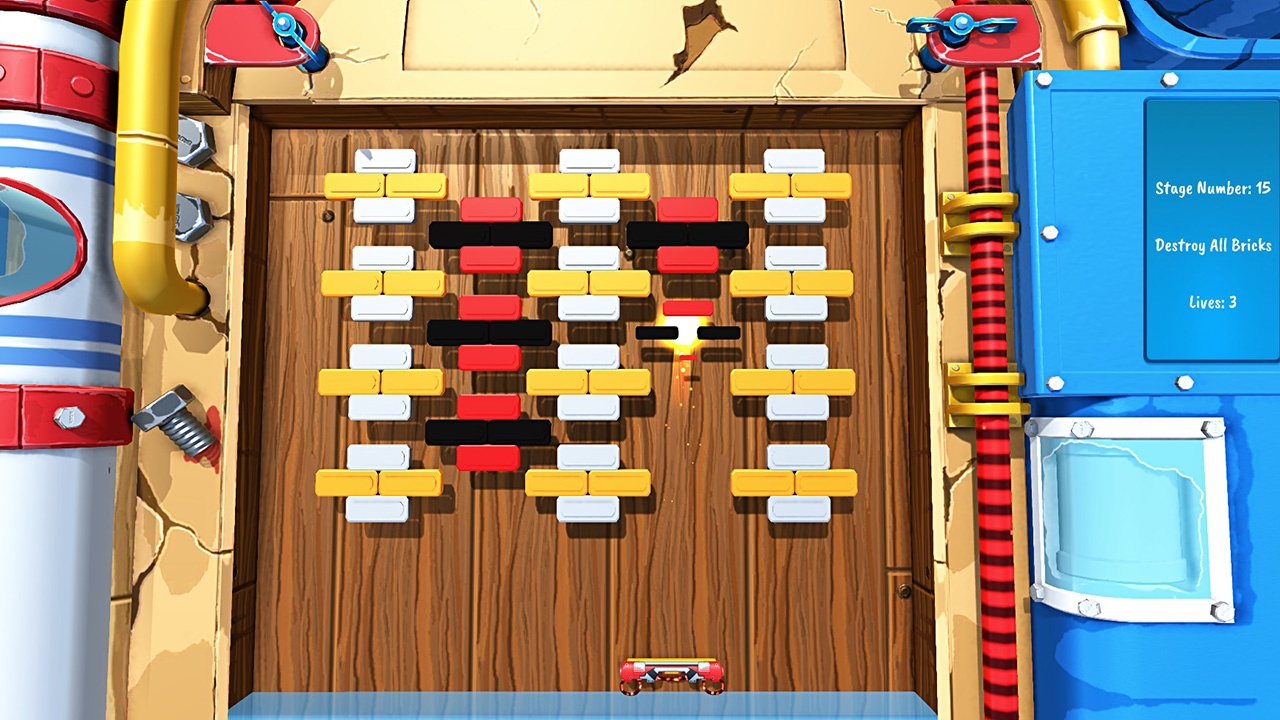 Atari’s Pong was one of the earliest forms of arcade gaming when it was first released in nineteen seventy-two. With its commercial success and transition onto early home consoles, this title began to evolve in numerous variations that eventually spawned titles such as Breakout and Arkanoid. Despite its age, the mechanics of this style of game has lasted the test of time with a simplistic mechanic that is still entertaining the masses to this day. Developed and published by Blue Sunset Games, Glaive: Brick Breaker is the latest in a long lineage within its genre to grace our screens and is now busting-a-move onto the Nintendo Switch.

Its basic premise follows the same template of the Arkanoid-style of gameplay. By sliding a paddle on a horizontal, or even vertical axis, you deflect a ball into a series of bricks, destroying them until none remain. However, what Glaive: Brick Breaker has done, is to borrow elements from the genre’s previous iterations, as well as introduce some new features and put them all together into one neat, but extremely challenging package. Boasting over one hundred and twenty levels, this title offers a variety of game styles and modes which include classic, pong, shape breaker and boss fights. Each level brings in its own variety of challenges, such as unbreakable bricks, bricks that require more than one hit to dispose of them and mirrored paddles, to name but a few. These variations in gameplay and challenge offer differing styles in a tried-and-tested formula to help maintain a sense of freshness to the age-old mechanics of its game style. 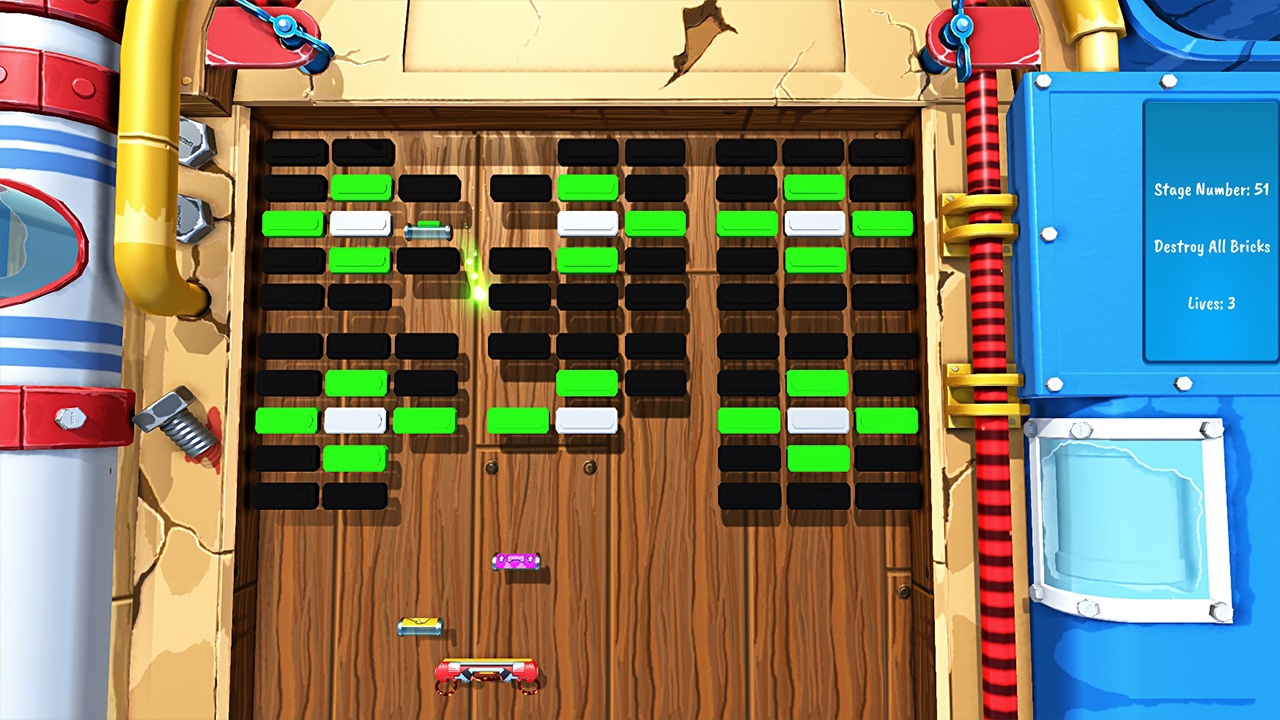 The first few levels offer a tutorial style of play, with an easily manageable challenge and introduction to the game’s various mechanics. However, its difficulty level soon spikes that brings a more urgent and concentrated style of gameplay. Saying that though, the game presents a nice pace that offers a relaxed form of entertainment, especially with its casual-play qualities. In order to help even up the odds of success with its ascending challenge, random bricks drop a number of power-ups that can be collected by steering your paddle into them. As well as a variety of abilities that can help you, such as power balls which smash through bricks instead of deflecting off them, elongated paddles, rockets and slow-down, as well as many others, there are also varieties that can hamper your progress, which include faster ball speeds and shorter paddles. To help distinguish between the various power-ups, or power-downs, each of their dropped capsules are colour coordinated; although it takes a bit of time to learn the mechanics of each of the capsules abilities.

There are a number of factors within each of the levels which determine the level of difficulty in clearing all of the bricks within them. Level design plays a major role, with restricted pathways created by indestructible bricks, which requires a great deal of dexterity in order to guide your ball along the correct trajectory. One particular style of play that was a personal favourite, and one that I have never come across before, was the inclusion of mirrored paddles upon a level. This basically comprises of your paddle that slides along a horizontal axis at the bottom of the screen. However, a similar paddle also glides along the top of the screen, meaning that you have to deflect your ball between them, whilst trying to destroy bricks at the same time. It’s these varieties in gameplay that help bring something new to the table, as well provide new challenges that may not necessarily by associated with the game’s genre.

Another form of variance also comes in the guise of boss battles, also an inclusion within the game’s genre that I have never come across before. These provide an excruciating challenge in their difficulty, but one that is not impossible to conquer. As well as its extensive single-player offering, Glaive: Brick Breaker also incorporates a local multiplayer element that sees you competing across a variety of differing levels. This mode feels closer to the original Pong with its elements of deflecting a ball to each other’s paddles, although the added inclusion of destroying bricks is also implemented. Both players compete in a battle of scores which, again, offers a differing style of gameplay; as well as extending the lifetime of the game with an endless form of longevity. 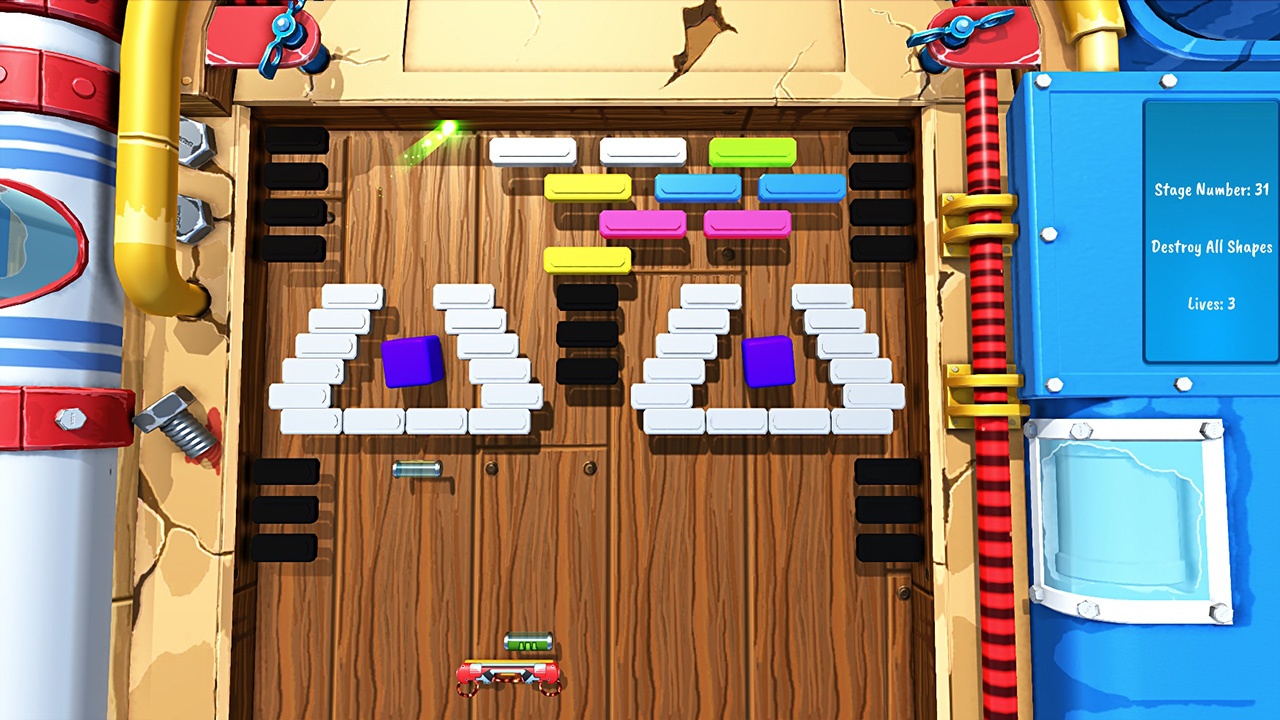 Everything controls particularly smoothly, especially in the operation of moving your paddle; something that has hampered the playability of other titles within the game’s genre in the past. It all adds to give the title a pleasing feel in its execution. However, saying that, some of the physics with ball control can be questionable at times; often deflecting at an angle that isn’t true or floating through your paddle if contact isn’t performed sweetly. Despite its smoothness of analogue control, the game unfortunately does not take advantage of the switch’s touchscreen capabilities, which is a strange omission considering the style of the game. It’s not a deal-breaker, but allowing the player extra options in the control scheme would have been a nice addition. The aesthetics of the game are presented well, with a satisfying 3D style of level layout, although distinguishing between the colours of the power-up pills can be a bit hit-and-miss at times; especially when a series of bricks drop multiple items. Sound effects are minimal, but the game’s soundtrack is often pleasing to the ear and suitably quirky; often matching the action on-screen.

Overall, Glaive: Brick Breaker offers a nice variation on the Pong or Arkanoid theme. With its new styles of gameplay, from boss battles, multi-mechanics and multiplayer, there is a decent challenge for fans of the genre; as well as a huge amount of content that will entertain for a fair, few hours. However, despite the game offering some new elements, I didn’t feel it met the same level of gameplay excitement as the Arkanoid series; both in terms of level design and playability. This doesn’t make it a bad game though; it’s more a personal feeling after having extensive play-time with Taito’s title. For its price range, however, this is a game that has a lot to offer and sits nicely in a casual capacity upon the Nintendo Switch. Despite some frustrations, this is a title that does contain some pleasing elements in its gameplay and also offers a tough challenge; thus making it more of an acceptable brick-breaker rather than a deal-breaker.

An Arkanoid-style game that will have you bashing your head against a wall in order to break the bricks.