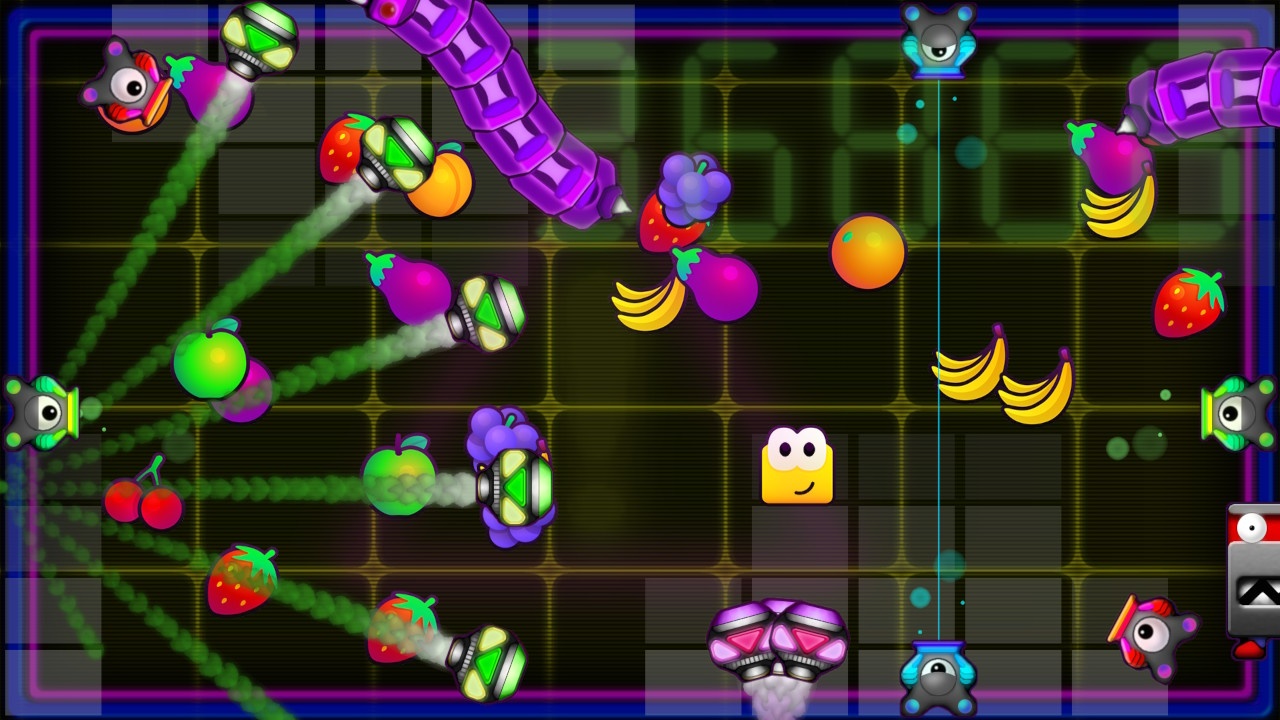 Quite often, it is the simplest of formats that produce the best of results. Take Pacman for example, its basic premise involved guiding a yellow circle around a maze as he chomped dots and avoided ghosts. Simple! Yet strangely addictive. Or Pong, even; two vertical lines on the edge of the screen, deflecting a moving square to each other whilst you tried in vain to line yourself up in order to prevent the square from going off your side of the screen. Basic! Yet, again, very strangely addictive. We’ve come a long way in the world of video gaming since those days, with digital demands producing more technical titles that have the ability to wow and amaze us lucky gamers. However, it’s also nice sometimes, to just sit back and appreciate a game for what it is and remind ourselves of what it is that makes gaming so much fun. So, let me introduce Don’t Die, Mr. Robot! DX, a title developed by Infinite State Games and published through Digerati, out now on the Nintendo Switch.

Originally released in 2014 on Sony’s Vita handheld console, with later transitions onto the Playstation 4 and iOS platforms, Don’t Die, Mr. Robot! DX now brings an updated version of the game to Nintendo’s newest portable machine. With refreshed graphics, improved presentation and a new soundtrack, this edition of the game presents a definitive style with its basic, yet extremely wild, wacky and dangerously addictive gameplay to a whole new audience. You play the role of Mr. Robot, a square-like robotic figure who needs to dodge the onslaught of a variety mechanical bad guys in order to stay alive. It’s a simple premise that plays in a similar vein to the old-school, arcade bullet-hell style of games, such as Xevious or 1942; and I mean that in a very loose sense. Although similarities remain in a bullet-dodging sense and a pure form of arcade fun, Don’t Die plays within a limited arena with no moving scenery as a backdrop.

By using the left thumb-stick, you glide Mr. Robot around the screen, as a multitude of enemies appear from all sides of the screen, as you simply dodge their paths in an avoidance of making any contact. It doesn’t sound much, but when you add in everything that the developers have incorporated into the gameplay, you soon come to realise that this is an absolute gem of a title that will simply entertain for hours on end. The game offers four modes of play: Arcade, Time Attack, Chill Out and Remix. The latter of these four options is the main staple of the game, producing fifty levels that mix themselves up in the objectives you need to achieve within each one. 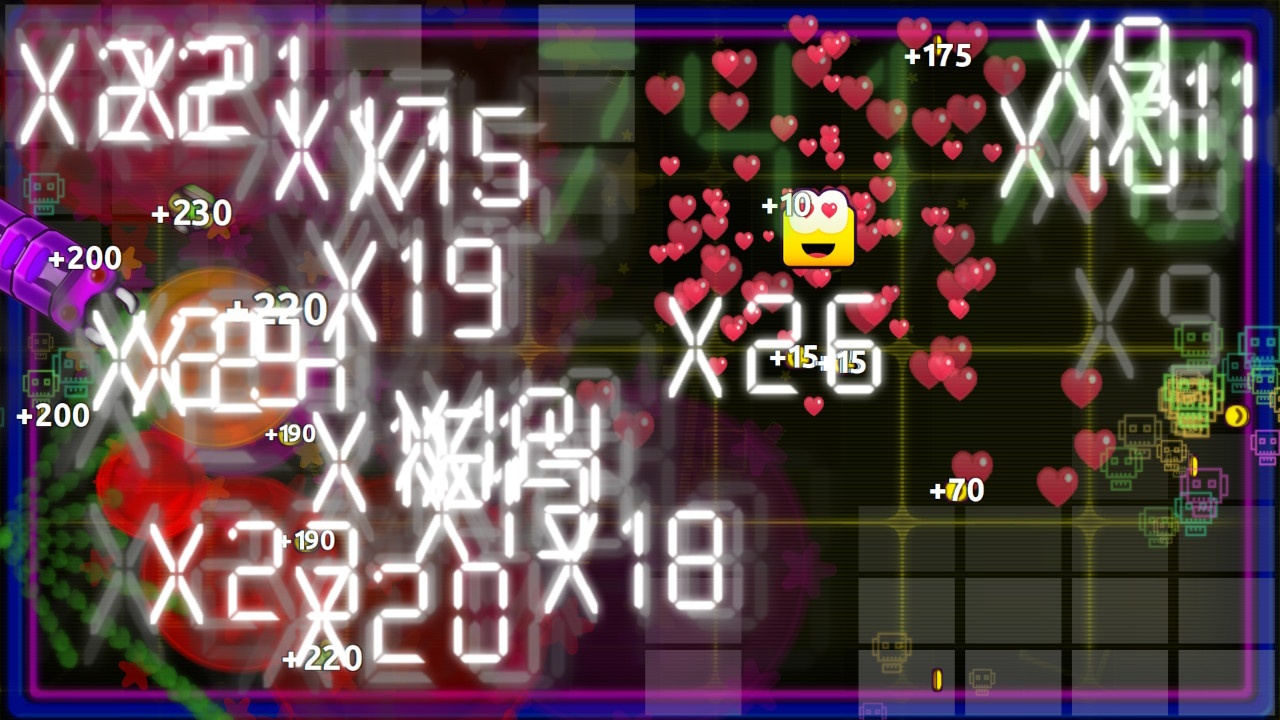 You begin with a simple dodge mechanic, however, it isn’t long before further elements are brought into the game. Pieces of fruit begin to randomly materialise on the screen and by sliding Mr. Robot into them, produces an expanding shockwave that destroys any enemy that is caught within its blast. Again, it sounds like a simple premise, but when you have a screen full of erratically moving bad-guys, as well as chaining together a few fruit-blasts, your limited playing area soon fills with all manner of aesthetical delights; all the time keeping one eye on Mr. Robot to ensure he is safe from harm. There is simply so much going on, on-screen, at any given time that finding a safe haven for your heroic square soon becomes a frantic and engaging exercise.

There are a nice variety of enemy combatants that you need to dodge; each one requiring a differing style of dexterity to avoid their oncoming attacks. From firework-styles of mechanical machine, that leave a starburst trail behind them, to centipede-like creatures, homing missiles and laser beams, all working together to fill the playing area, thus limiting your path options and places of safety; some of the latter levels producing scenes of such mayhem, that you need to skilfully manoeuvre Mr. Robot into, and out of, the tightest of situations. However, by chaining together a combination of fruit explosions, you can clear large areas of the screen, as well as bolster your highest score, with truly spectacular results.

Completion of each of the level’s objectives awards you with victory cups, ranging from bronze up to platinum for the true dodgers out there. This adds an element of longevity to the title as you can re-visit previously passed tests to gain the ultimate rewards, as well as bragging rights. Arcade and Time Attack modes of play also add to the life of the game, offering a variant on its main premise that focuses more on high scores. Arcade plays on a survival-style of play, the longer you live over a progressively challenging difficulty, the higher your score; with Time Attack following in a similar fashion but one based on survival time. The Chill Out mode of play, offers a similar vein to remix and arcade, however, everything is significantly slowed down to give you a more relaxing experience. 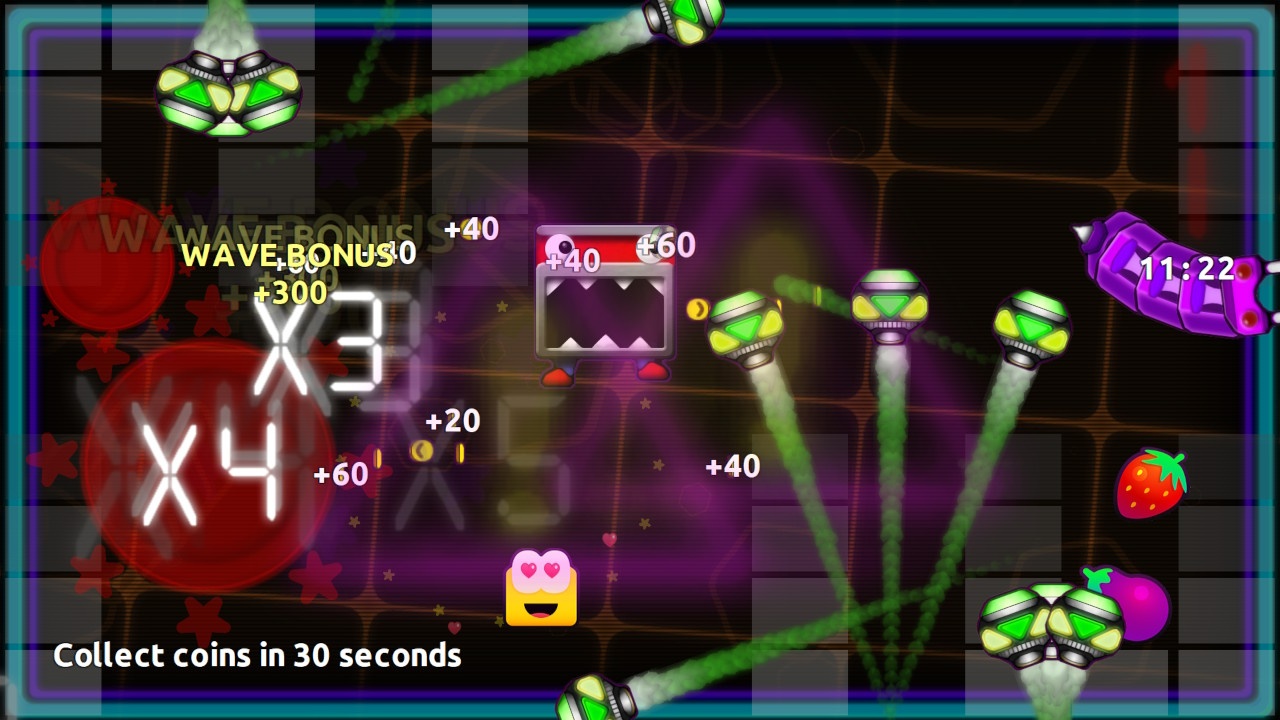 As you progress in destroying the invading armies upon your screen, you can accrue credits which are used to purchase buffs and personalisation items from the in-game store. These abilities range from shielding for defence, magnets that attract dropped credits and firepower for a more varied attack. As well as these items, you can also buy a variety of cosmetic apparels. Although primarily a square, Mr. Robot possesses an absolutely charming persona, with a variety of facial emotions that simply melts your heart. By adding your own mark of personalisation, from different colours, country flags, hair accessories and glasses, you can put your own stamp on Mr. Robot; you even have to ability to render him a Mr. or a Mrs. As well as these customisation options, you can also unlock five, varying, playable characters that alter the shape and size of Mr. Robot, thus increasing the challenge of the game. All of these components further bolster the longevity of the title, as well as add an element of depth to the gameplay.

The production and presentation of Don’t Die has been superbly implemented by the developers. Although basic in its premise in terms of gameplay, its graphical representation oozes with a particular charm. Everything is bright, bold and brash, making it especially pleasing to view. The background is very simplistic, yet extremely effective in its use with no distracting features, yet it supplies a very satisfying depth to the field of view. Each of the characters, especially Mr. Robot, have a very emotive feel to their design, giving the illusion that there pixelated forms contain some quality of life. It all has a very modern and professional feel to it. The sound is also of the highest quality, especially when it comes to the soundtrack, one of the upgraded features on this Switch version of the game. Its electro-synth orchestra really does suit the aesthetic and style of the gameplay. This is particularly so in the game’s Chill Out mode, where this particular offering in its gameplay has me playing just for the soundtrack alone, it’s a suitably sublime experience and its relaxing tones are of a melody that I will never tire from listening to.

Overall, Don’t Die, Mr Robot! DX is a title that is borne from the highest quality. It’s extremely simplistic, instantly accessible and provides a fun challenge that isn’t frustrating in any way. Its cutesy charms have a way of pulling you into the game, even to a point where you start to care about Mr. Robot and do everything within your power to keep him alive. It’s upbeat tempo and rhythmic soundtrack all add to the experience, making this title an absolute joy to play. Whether it’s in a casual capacity or a more prolonged period of play, this is a title that will most certainly entertain. If there’s one minor gripe, then it would be the omission of any touch-screen control or local multiplayer, but it’s no deal-breaker really. Infinite State Games have outdone themselves yet again with their newest offering to the Nintendo Switch library and with its pocket-money pricing, you’d be a fool not to add this game to yours.