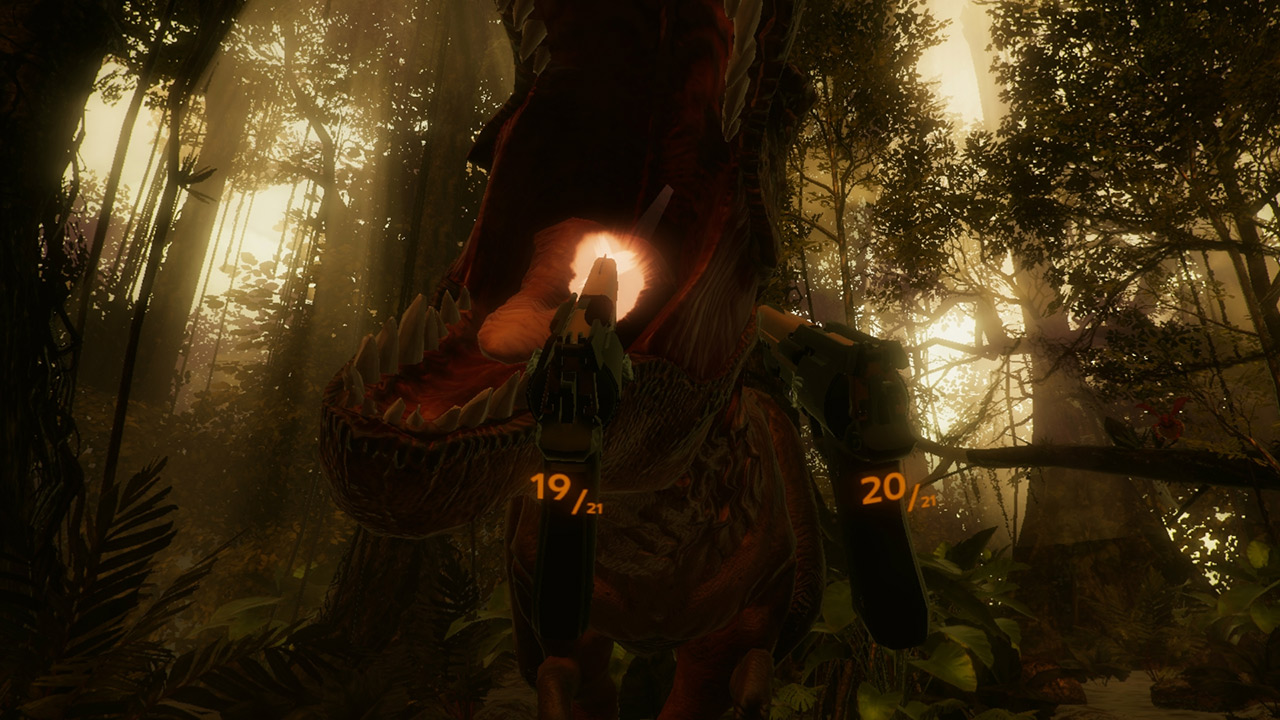 It has been a year and a half since the release of PSVR – after a rather weak start there have been some great releases in a myriad of genres but shooters are the most consistently produced. I get it, it really does make sense since VR fits so well with guns, but some games just feel like rehashes with little to no originality. Time Carnage tries its best to inject something unique by providing a gallery shooter about time travel, where you will find yourself battling dinosaurs, robots, zombies and more – but can developer Wales Interactive mix this gimmick with engaging gameplay? Short answer, no.

The game starts with you flying on a little podium to a hub-world base where you pick which levels to tackle with some strange pointer that shoots from your finger. To start, it’s a case of battling through campaign mode which allows you to unlock levels in the two other main game modes, arcade and challenges. Unfortunately, campaign mode is extremely dull. It’s a wonder that anyone can make a game about shooting all sorts of baddies, while travelling through time, so boring. Although there is a story it is text-based and has no real point to it, just more of a way to link the different types of worlds and enemies together. There are several time periods each containing wave based levels in different locations. After completing a level you unlock a new weapon and continue on your journey. There’s just something about the campaign mode that is so stagnant, battling through ten waves of slow and easy enemies. 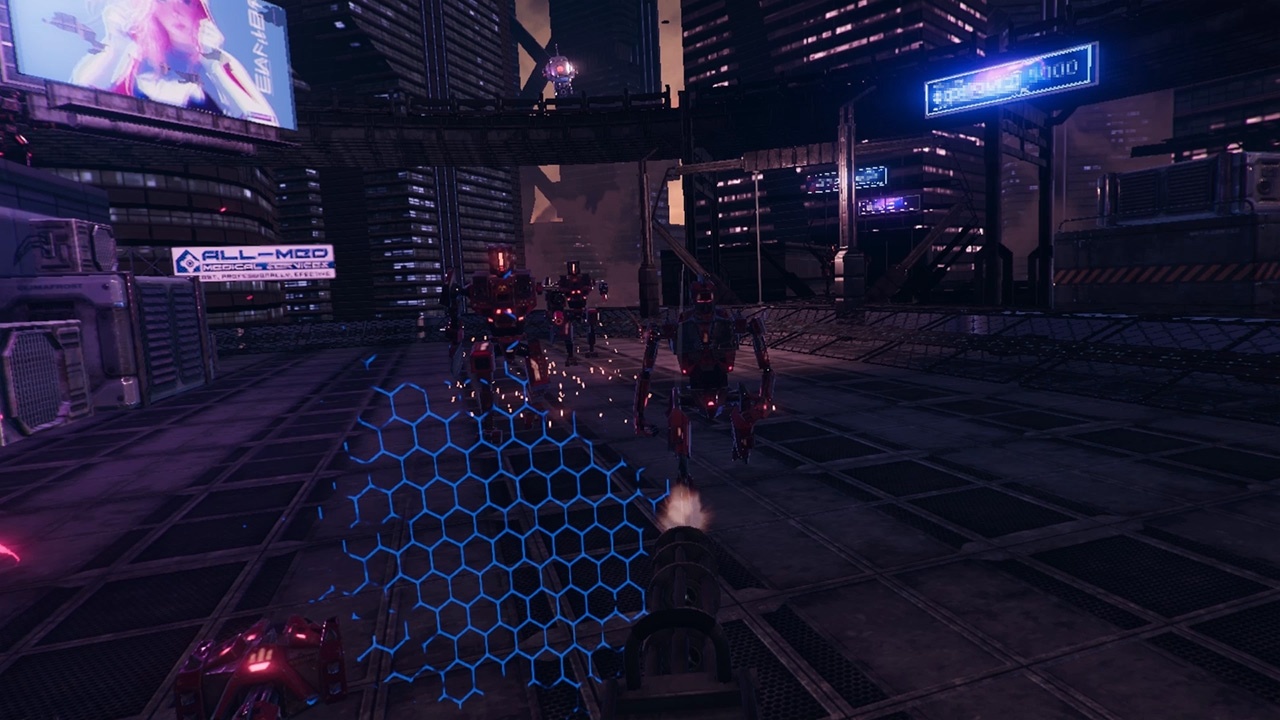 One of the saving graces for Time Carnage is the weapons, ranging from the typical pistols and shotguns to the more elaborate. In each level you get to pick a mix of four guns (or even four of the same gun, but I wouldn’t recommend this) which all stand on podiums. After picking them up and using them, placing them back will allow the guns to automatically recharge, which can be done an unlimited amount of times. Having varies weapons with no consequence of blasting away, allows for fun combinations with quick swapping tactically based on the situation, it really adds to the mayhem.

The graphics look ok, like an early VR attempt compared to the more visually appealing games that are available these days. There is a lot of muddy brown colours with dreary backdrops which just add to the overall bland feeling. Locations and enemies look particularly poor. Even worse are the sound effects – getting headshots results in an annoying ping sound like a till opening. Gunshots are particularly dreadful, they sound like firecrackers hitting tin cans and really take away from the overall feel. Performance is more of the same, usually it runs fine but there is the occasional hiccup when loading waves or when lots of things are happening on the screen at once. 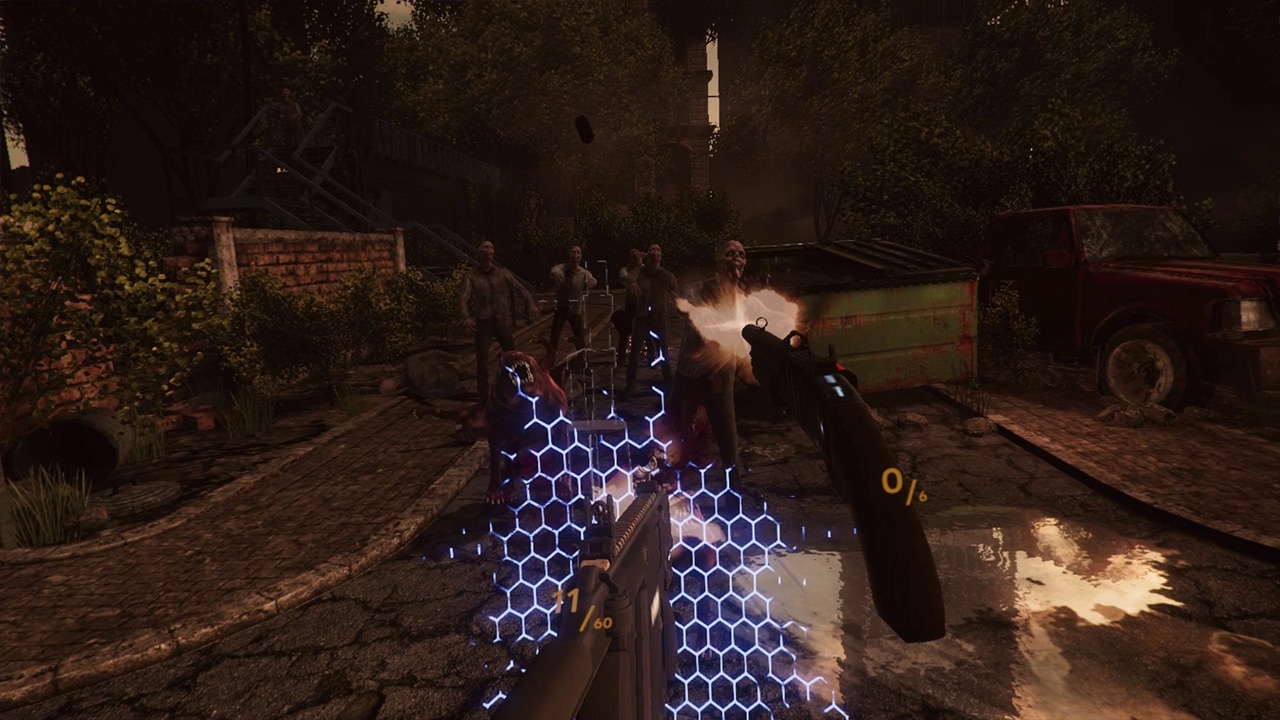 Talking about enemies, although the types are cool they fit into the standard box of small and fast but weak, regular and slow but strong – plus flying creatures. It’s unfortunate the developer could not have thought of something more original here since some of the enemy types are fun and unique for a shooter.

To say the game as a whole is dull is not fair – the other game modes are actually really fun, keeping nice pacing and the right amount of frantic gameplay. Usually I am all for progression, having a sense of purpose, but when the campaign is just pure tedium it can be very off-putting. If not for the fact I wanted to experience everything on offer here, I would have stopped after the first few levels.

There is definitely a market for this game – if you’re someone that enjoys old school arcade games there’s a lot here for you to enjoy. Unfortunately at a time when a developer can achieve so much with the VR system,  Time Carnage comes across more like an early title. The cheap price makes it an easier proposition to swallow but games that make no effort to push the boundaries in VR feel like a waste of time at this point in the hardware’s lifecycle.