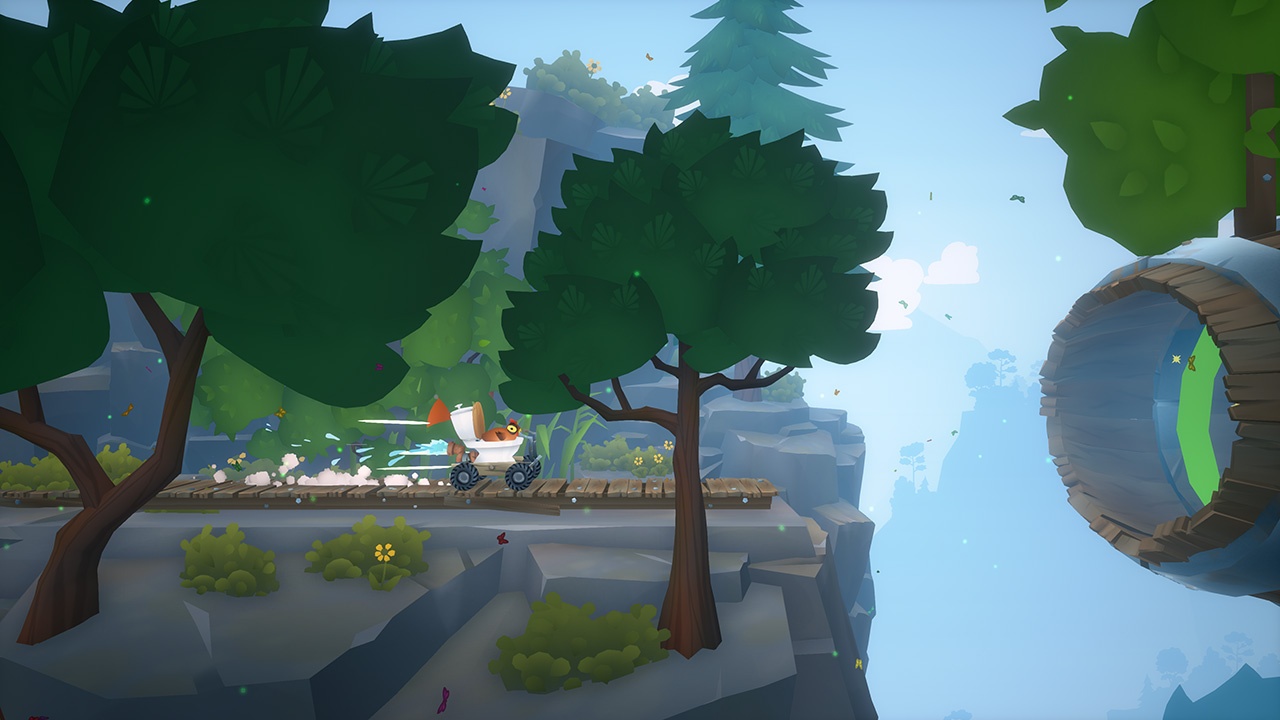 Animal Super Squad is a curious little title that dropped onto the Switch recently, and it’s curious for a number of reasons. For one, it’s bizarre, colorful and surprisingly engaging. For another, it’s clearly, audibly and unapologetically meant to be broken and difficult to enjoy. Built for the streaming crowd by streamers, Doublemoose Games set out to make something captivating and frustrating, and, for better or worse, they succeeded wildly.

There isn’t really a plot to speak of for Animal Super Squad. You’re one of five animals (only the chicken is available initially) and you need to make your way across the terrain of a physics-based puzzle level. You have to roll, jump and occasionally ride through multiple types of floors, from swinging platforms to wind tunnels and giant, killer machines that exist only to obliterate you and ruin your day. Along the way, make sure you hit the checkpoints to respawn when things inevitably go off the rails, find some of the secrets hidden throughout each level (such as new characters, hats and extra bonus levels) and eventually make your way to the exploding goal at the end. It’s a bit silly, but that’s also the intention, so it makes sense.

Graphically and aurally, the delivery for this game is surprisingly above board. The graphics are all cartoonish and simple, but it works well for the game that’s being delivered. Animal Super Squad wants you to know that you’re going to be a chicken, a sloth or some other creature, and you may wear a banana, a boot, a traffic cone, any sort of thing as a hat. You move around in a series of unlockable vehicles that shouldn’t work at all, starting with a mobile toilet that controls like the truck from Snuggle Truck and finding new, unwieldy transports, like a personal helicopter that plummets when you go left or right. Everything has a bright, almost glossy sheen to it, and it works well with the type of gameplay you find within. The soundtrack, which was a massive enjoyment, really evokes the soundtracks of platform adventures from the late 16 bit era. Think Donkey Kong Country meets Starfy, that kind of upbeat, almost happy tune that flows throughout. For a game that’s only ten bucks, the actual polish put in here is worth the price of admission. 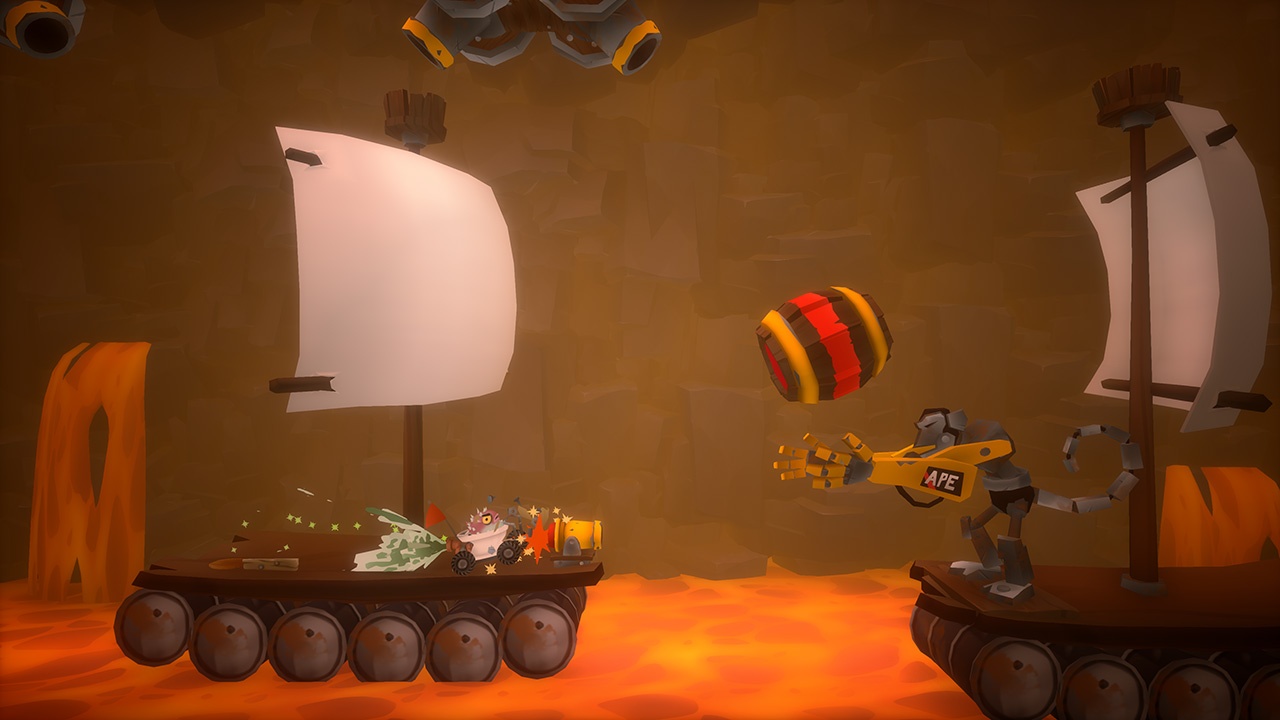 The gameplay itself of Animal Super Squad is something that’s going to be entirely hit or miss with the players. You don’t really have great control of anything. The chicken just sort of flops and rolls about, the sloth does the same, and the vehicles, as I mentioned above, are totally at the whim and will of nature and physics. You’ll have spurts of time when you simply fly ahead, holding down the ZR button to move forward and barreling towards victory with the confidence of someone in a far less ridiculous outfit. Then you’ll have moments of pain and suffering the likes of which you never could imagine. There’s one hidden level in particular where you are immediately beset by an advancing dervish from behind and a slowly receding water line ahead of you (touching water is insta-death). I had to figure out the right way to pace myself so that my ass was out of reach of the whirling blades, I was still keeping dry, and my vehicle didn’t flip upside down and leave me to die. Victory was incredibly sweet, until I realized I had spent fifteen minutes making sure a chicken in a toilet didn’t get hit by a series of boots on a windmill. Not my proudest actualization.

One thing that’s really, almost disturbingly interesting is that Animal Super Squad, on their Steam page, is openly and brazenly listed as Early Access. Now, for Steam, that might be a way to dodge negative commentary (the game is still being made, chill!) and ignore feedback (the game will be totally different when it’s done, relax!). Great, no problems there. But this is on the Switch now, and, although Nintendo has been pretty good about turnaround times for patches and such, we’ve heard from devs that it can take a minute for things to get approved and pushed to the servers. So when I say this game is buggy, and it is buggy, you have to keep in mind that might be how it is for a while. But the game seems almost PROUD to be buggy. Collisions, glitches and messed up reactions are the cream of the crop for people doing Let’s Play and streams, and Animal Super Squad has somehow managed to bottle those moments without outright crashing. One level accidentally spawned me slightly below where I should have been, resulting in my endless loop of death and rebirth and the screen to go wild until I forced a checkpoint respawn, at which point everything was fine. I’ve seen parts of the landscape give up and simply dance away like they remembered they had prior engagements, but it didn’t actually affect my gameplay. As the saying goes, if it’s stupid and it works, it isn’t stupid, and Animal Super Squad is the pinnacle of this idea. 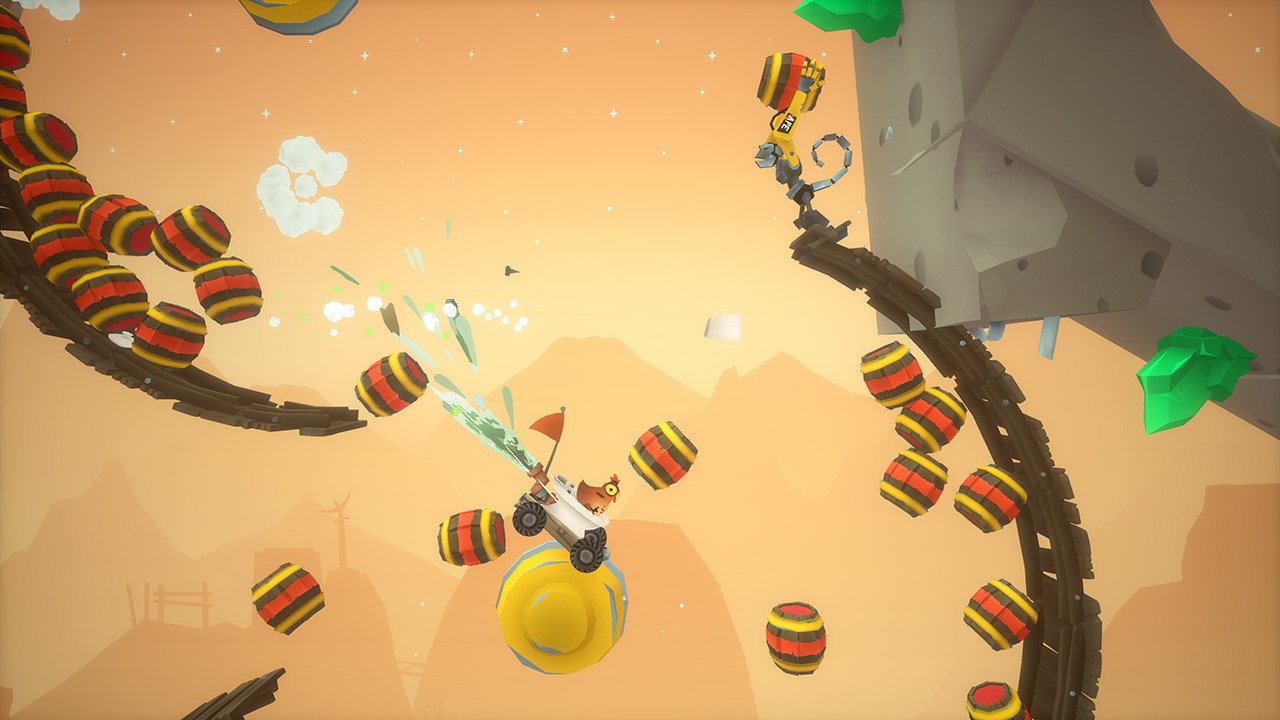 Lastly, the level editor. Oh boy. So, the Switch is desperately itching for a great game to let players create and share stages within a good game, and there have already been a few attempts. Poly Bridge, bless its heart, is a great game for design and creation but it takes a certain level of understanding with physics and all that to make a good one. Animal Super Squad has a massive editor that’s somewhere between intuitive and overwhelming, but I’m leaning more towards the former. The editor has a few small parameters in place to prevent the game from being totally unplayable, but otherwise things are freeform. There are pages upon pages of items, obstacles and platforms that you can insert into the game, and you can change the level of interaction, reaction and visibility for them all to make a stage that’s either glorious or devious. If you really want, check out some of the great stages that players have made and get spotlit every week: good creators deserve recognition, and this is one wonderful way that it can happen. I wonder if the creators of the PC levels can share them with the Switch players? I’ll have to find out.

Despite some silly presentation (the icon is seriously a giant chicken head) and buggy situations, Animal Super Squad is a whole lotta game for a relatively small price. You can probably finish the solo player campaign in a day or so, and then get to work on creating your own works and playing the feats of others. This isn’t Mario Maker, but it is cute, fun and has a lot of replay value. Definitely grab this if you’re looking for something to relax, make you smile and have a ton of mileage.