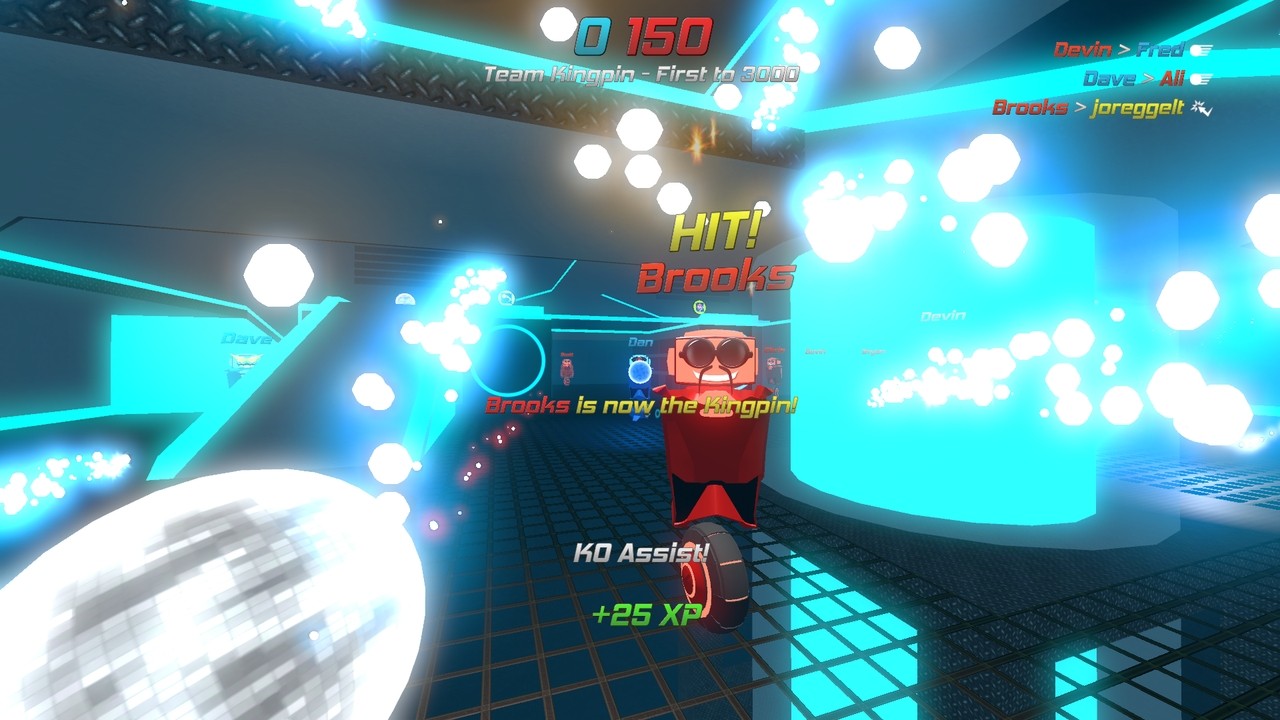 Dodgeball is one of those sports that you literally can’t believe was invented and, moreover, is still practiced. Imagine trying to pitch that to parents and teachers nowadays. “So you divide the children up, and have them just hurl balls as hard and as fast as they can at each other. If you get hit, you can double the pain of impact with the humiliation of being out. If you get hit in the face, it just means you’re out more.” It would never fly, but here we are, decades later and it’s a time-honored tradition, one that I gleefully enjoy when I get to be an adult versus children. We’ve already had one Dodgeball game on the Switch, but this new title – Disco Dodgeball Remix – takes the sport to a pretty insane new level.

First and foremost, big thanks to Zen Studio from taking a break in their polishing of Pinball FX3 to bring this particular title to the Switch (as well as other major consoles). Erik Asmussen, the solo developer and creator of the game, got a bit of help from Zen to bring this beauty onto the Switch with a few extra perks baked in. Far from having some huge plot and intricate backstory, Disco Dodgeball Remix is a re-imagining of Robot Roller-Derby Disco Dodgeball, which simply had too long of a name to grab appeal in the console game. The premise is simple: insane arenas exist, you’re a robot, and you’ve got plenty of balls to throw in a challenge of one-hit kills versus AI, friends in person or friends online. At the time of this writing, Zen did want me to know that, due to a big part of the game being online play, that we should keep an eye and ear open after the embargo lifts to see how the game plays with other people. Speaking as someone who prefers couch co-op, I’m not terribly concerned, but I did want to let readers know that the real spark of this game does come from being able to play online versus players around the world. Plus, the online multiplayer boasts a whopping 12 players at once, which sounds pretty interesting to behold. 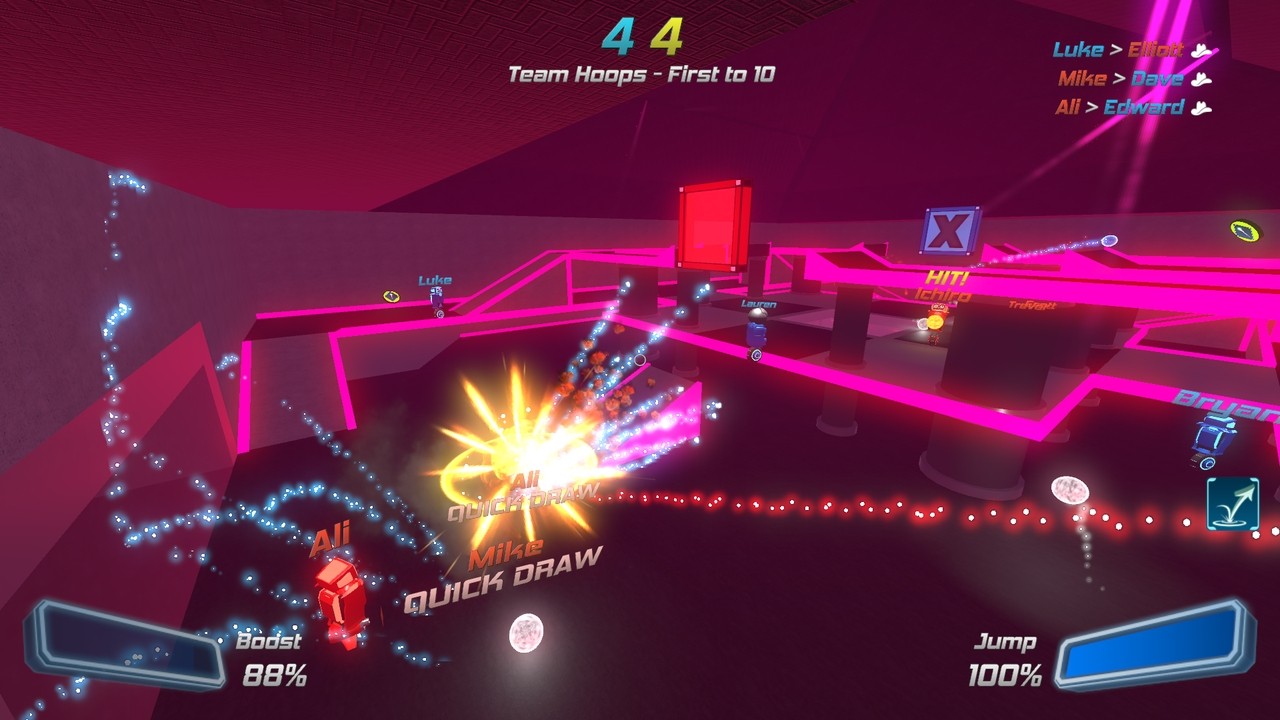 At the core, Disco Dodgeball Remix is very simple and straightforward in mechanics. There’s a first person perspective to allow you to stare down the metaphoric gun of dodgeball, and holding down ZR charges up your throw strength. ZR also catches the ball, which is so immensely satisfying to snatch a potential shot out of the air and return fire to take down your foes. The basics are something Disco Dodgeball Remix got very, very right: limited sprints to try to grab the ball before someone else, jumping, a lot of wild camera movement and the single hit to let you know whether you’re safe or out. For my players out there who also suffer from FPS motion sickness, I’m afraid this is going to take you down the same path as Immortal Redneck: play small spurts at a time, enjoy yourself, but remember to break often, lest you vomit all over the controller.

But what makes Disco Dodgeball Remix different comes in three fold. Firstly, the single player campaign is actually really involved and has quite a bit more to it than the story campaign of Stikbold! Not only are there plenty of challenges to practice and beat, but there are several different modes that allow you to rack up high scores and some imaginary money to buy and unlock cosmetics for your character. From simple floor based insanity to actual modes with jetpacks and homing balls, from endless hordes of smaller bots to legitimate dodgeball bots, I was shocked with what the game has to offer for the single player. It was only later that I found out that, despite a 2015 release date, the original Robot Roller-Derby version has been getting consistent updates right to the 11th of this month, which is almost unheard of for many indie games. When you look at the level of expansion that’s gone into it, the presence the game creates is borderline flabbergasting.

Secondly, the aesthetics. With a name like Disco Dodgeball, you expect crazy lights and colors and sounds, and this game has them all in spades. The flashing and changing of the walls and floors keeps this game going and feeling like black light bowling night on acid. The music hums and throbs and keeps you fully locked into the experience, and the announcer’s voice will cut in to proclaim especially great shots or hits like a callback to Unreal Tournament. The robots themselves are almost cartoonishly bare, but, again, that’s why the cosmetic unlocks are so important. People who want to get down their skill of perfecting mid-air kills, ricochet hits or no scope 360 headshots (well, with a ball) have plenty of reason to practice on their own, and the visuals and audio make it a treat instead of a chore. 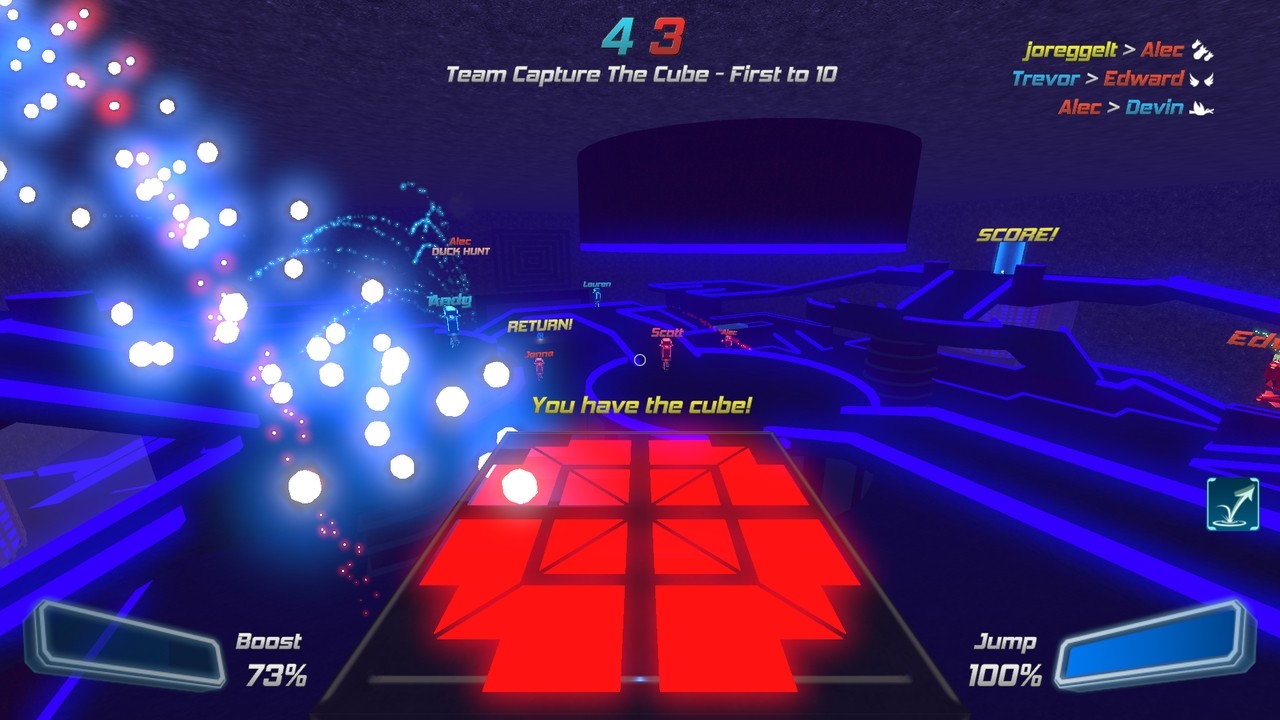 Lastly, the multiplayer. Now, sadly, Disco Dodgeball Remix is NOT cross-platform: I believe that Zen tried their best, but latency, lag and consistency is the most important factor. Instead, we have two different multiplayer modes. The local multiplayer is only split screen and comes down to two players, but this keeps up the framerate and makes things look smoother. On the small screen, two players makes sense, but I would have really, really liked to see a docked 4 player local. And, again, the online multiplayer boasts a twelve person setup, six on each team, with all the objectives, modes and targets you could hope for. When the game goes live, it’ll really be a testament of how many people get this game to see who’s hanging out in the lobby. Since it’s simultaneously releasing on the Big Three on the same day, I’ll be interested to see who ends up picking this up and who does not.

At the end of the day, Disco Dodgeball Remix lives and dies depending on who is playing and who they’re playing with. Being able to have a solid, enjoyable and surprisingly long offerance of single player moments was a smart move and will keep people busy when the lobby is empty. The lack of cross-platform worries me, however: even Rocket League has cross-platform with XBox players, and the performance has only gotten better as the game has been burned in. Disco Dodgeball Remix, though incredibly fun and eye-catching, doesn’t yet have the same household name, and people have become a little disenchanted during NIntendo’s second (but comparatively less exciting) year for the little console that could. Without a large player base, Disco Dodgeball Remix may not have the staying power to keep on the front page of the eShop, and that would be a serious, regrettable shame. If you’ve got heart for the dodgeball spirit and love colorful, overpowering mayhem that keeps you muttering “one more game,” then this is the game for you and the kid within.