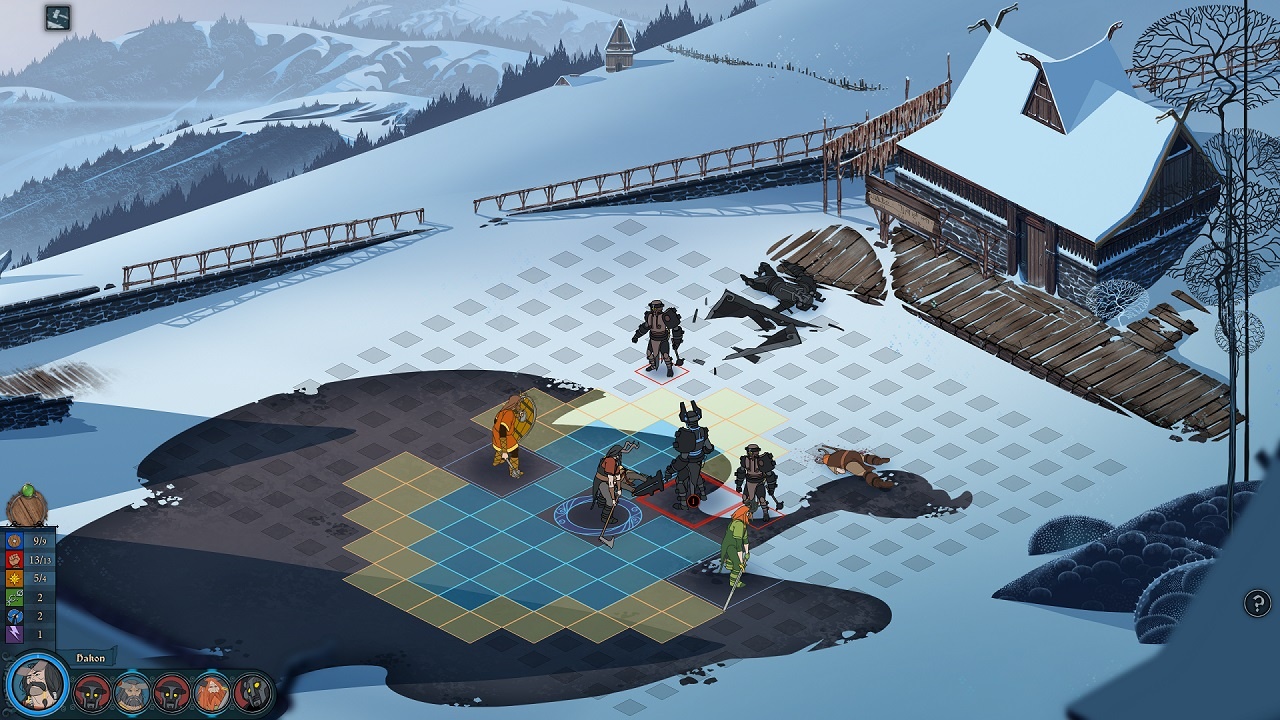 The fantastical lands and myths that revolve around medieval lore and dragons are often very bleak in their settings and presentations; dark times, dark forces and often, dark stories. Take Game of Thrones and Lords of the Rings for example. However, if there’s one thing that shines through the darkness of these tales, its character developments through evil or heroic journeys and deeds. The same can easily be said for The Banner Saga, the first title in a trilogy to be released upon the Nintendo Switch.

Developed by Stoic and published by Versus Evil, this tactical role-playing game follows the co-existence of Varl, large giant-like beings and humans, as they share the land after banishing the dark forces of The Dredge, an evil force that rose from the depths after the death of the gods. During the coldness of a bleak, snow-laden land where the sun hangs lost, two parties of travellers, who begin their journey at opposite ends of the continent, flea the turmoil and threat of the Dredge in a story that contains more twists and turns than the mountainous paths along where they trudge. The story begins in the middle of things, there’s no gentle introduction to what may be about to come. What has happened, has happened and now you’re caught up in the middle of it.

I don’t want to give too much away in respect of story, plot or themes, as this is an integral part of the game. Partly narrated and part textual, the story drives forward between two perspectives, those of each of the travelling caravan parties. It’s all superbly spoken and written, creating a novel-like experience that even delves into personal feelings, descriptions and thoughts. It all adds to the personality of the games’ various characters, thus leading to an investment in their personas. Within each of the travelling bands, you’ll also gain perspectives from individuals within each party, giving a wide-reaching account that soon leads to decisions that can drastically alter the path of the story and the alliances within it.

This is achieved through choices within the narrative that can have a lasting impact on the outcome of your journey. Do you let certain characters join your party? Do you keep other allies free from the horrors of conflict in order to protect them? Do you destroy a bridge that can stop the evil advance, yet damage the fragile alliance between Varl and human? It’s all up to you and they all have an effect that branches the story in all manner of directions. It’s a thoroughly engaging mechanic that draws you deeper into the lore that surrounds the land. It’s all further enhanced by a dramatic score and presentation that matches the splendour and suspense of a Hollywood blockbuster movie or serial Netflix presentation. 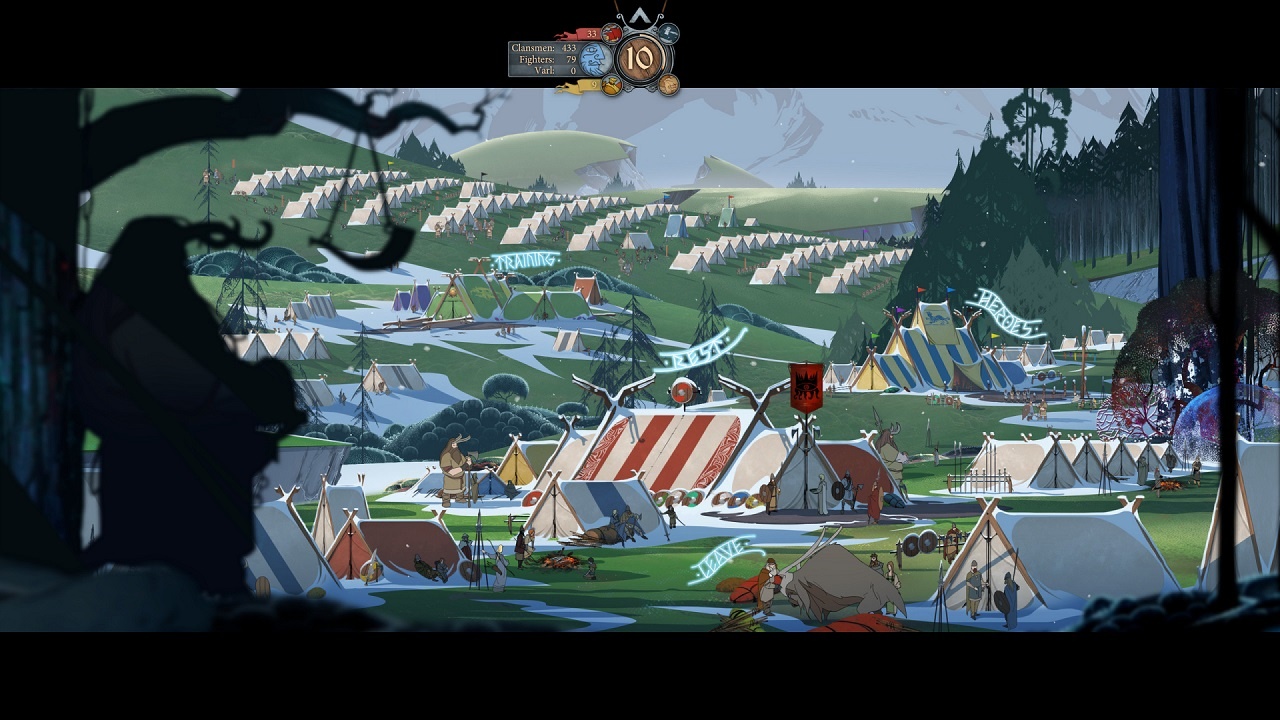 Its lengthy tale has a very mature feel to it, one that keeps you constantly engaged, as you develop a feeling of caring for the game’s characters; their futures taking on a perception as bleak as the landscape that surrounds them. You’ll be called to make tough choices that can result in a favourite character leaving your party, or even being killed off and it’s these brutal consequences as a result of your decisions that keeps you playing forward in a hope to resolve past mistakes. Because of the nature of this mechanic, this is a story that individual players will experience differently from others; often producing a very different tale to tell from each person that plays it. With its dark themes and bleak existence, this isn’t a game I’d particularly recommend to younger players, not because of adult-orientated themes, but in the understanding of its story mechanics and tactically, unforgiving combat.

Despite its excellence in its story-driven narrative, the game also delivers large chunks of turn-based, strategic battles. Although they play in a similar fashion to other titles that use the same mechanic, such as grid movements and ranged and melee capabilities, these skirmishes require a lot more than simply walking up to your foe and unleashing an attack on them. Using both Varl and human characters, each of the races have different aspects to their capabilities which need to be taken into consideration. The Varl are slow and cumbersome, taking up four squares just with their presence, while humans are swift and nimble. Each combatant has three distinct, statistical elements to their make-up: armour, strength and willpower. This may sound limited in its execution, but in reality, opens up a whole new way of approaching combat situations.

Strength acts as both health and damage output, meaning the more health you lose, the less damage you can inflict. In order to protect yourself, you also have armour. If your, or your foe’s, armour is higher than your attackers damage, the less harmful they are to you. However, the more your armour gets chipped away, the more vulnerable you become to more powerful attacks. It creates a certain tug-of-war style of mechanic to the combat, resulting in tense affairs that require a good deal of strategy to succeed. To combat this, each member of your party also contains a limited amount of willpower. This allows you to move further, or inflict more damage. However, its depletion can leave you significantly weakened. 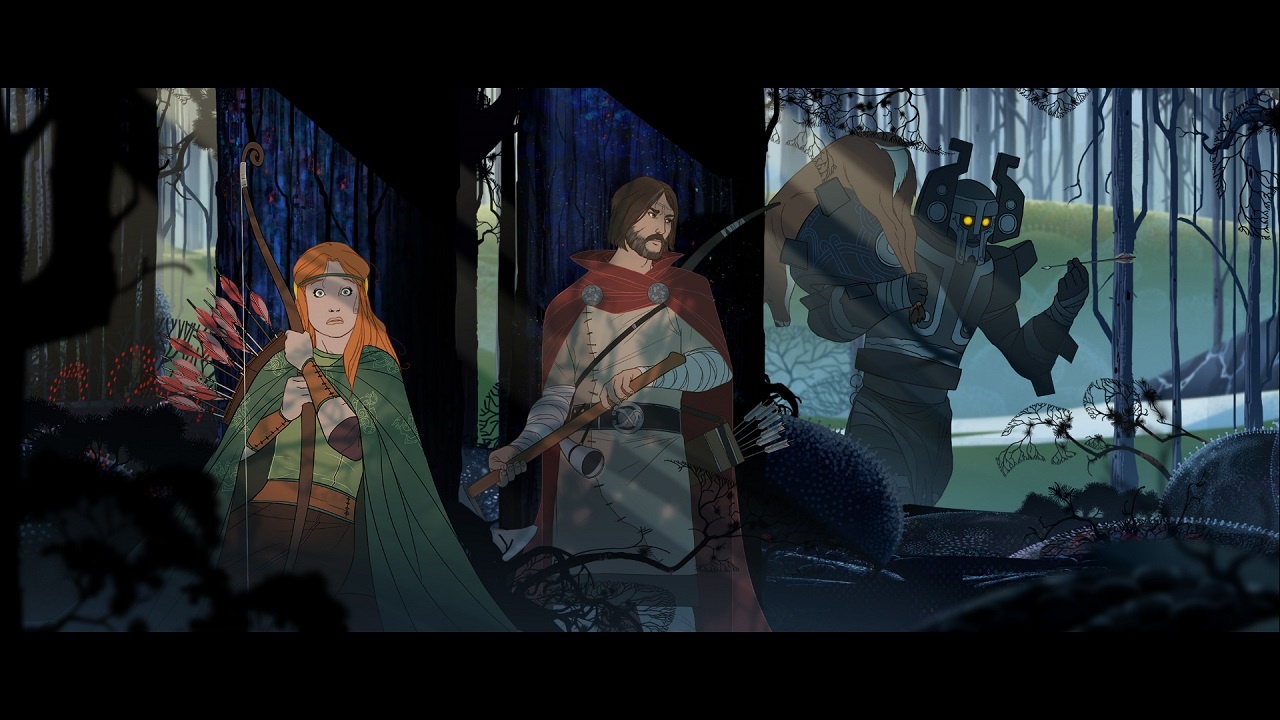 All these factors add an element of urgency to these skirmishes, as the longer each battle lasts, the weaker your party gradually become. However, by properly utilising the abilities of party members, such as using archers from distance and heavy-hitters at the forefront, you can establish a good tactic in defeating the various foes you can encounter. Should a party member succumb to the enemy force, they are then left injured and need to rest and recover before they gain full fitness again. It all gives a certain depth to combat that can be gruelling at times, but leaves you more satisfied with every victory from the tactical elements that you may have employed.

There are three difficulty settings within the game. The easiest option makes some of the combat mechanics a bit more forgiving, such as injured parties not needing to rest up, which takes some of the element of urgency and fun out of the game. However, the hard setting can make it an incredibly tough game to get through. However, normal mode is the recommended setting and offers the most balanced experience. All the usual role-playing elements remain intact, with items that can buff abilities and experience points to strengthen. However, morale and food supplies also play a part, but also produces and highlights some of the weaker elements to the game.

Although the game offers a tutorial that runs through the basics of combat, it fails to deliver on other aspects of the game. Both morale and rationing are very puzzling in their initial execution and require some time to learn their mechanics, as well as the intricacies of combat. However, with continued play and experimentation, the workings of these elements can be easily picked up. Although slightly frustrating, these omissions don’t really hamper your enjoyment of the game as there is so much to it that renders it forgivable. The mechanics of the whole game, its aesthetical presentation, in both story and character development and sumptuous combat make this a truly spectacular affair.

Overall, The Banner Saga is one the most grown-up video games that I have ever had the pleasure of playing. It’s suitably sublime in all of its presentations; even the little things like backgrounds and foregrounds on the battlefields are quite unique and wondrous in their execution. Its story is involving, especially with it defining moments of decision-making and its combat is tense and rewarding. With another two instalments planned for release on the Nintendo Switch, the decisions and story from this episode carrying over to the next games, makes this a title that contains a very long-term appeal. Even if you don’t like the choices you have made, or the outcomes disappoint, you can easily replay the game to produce a very different setting to the first. It may be bleak and it may be dark in its themes and settings, but at the same time, this is also one of the best examples of role-playing to date.