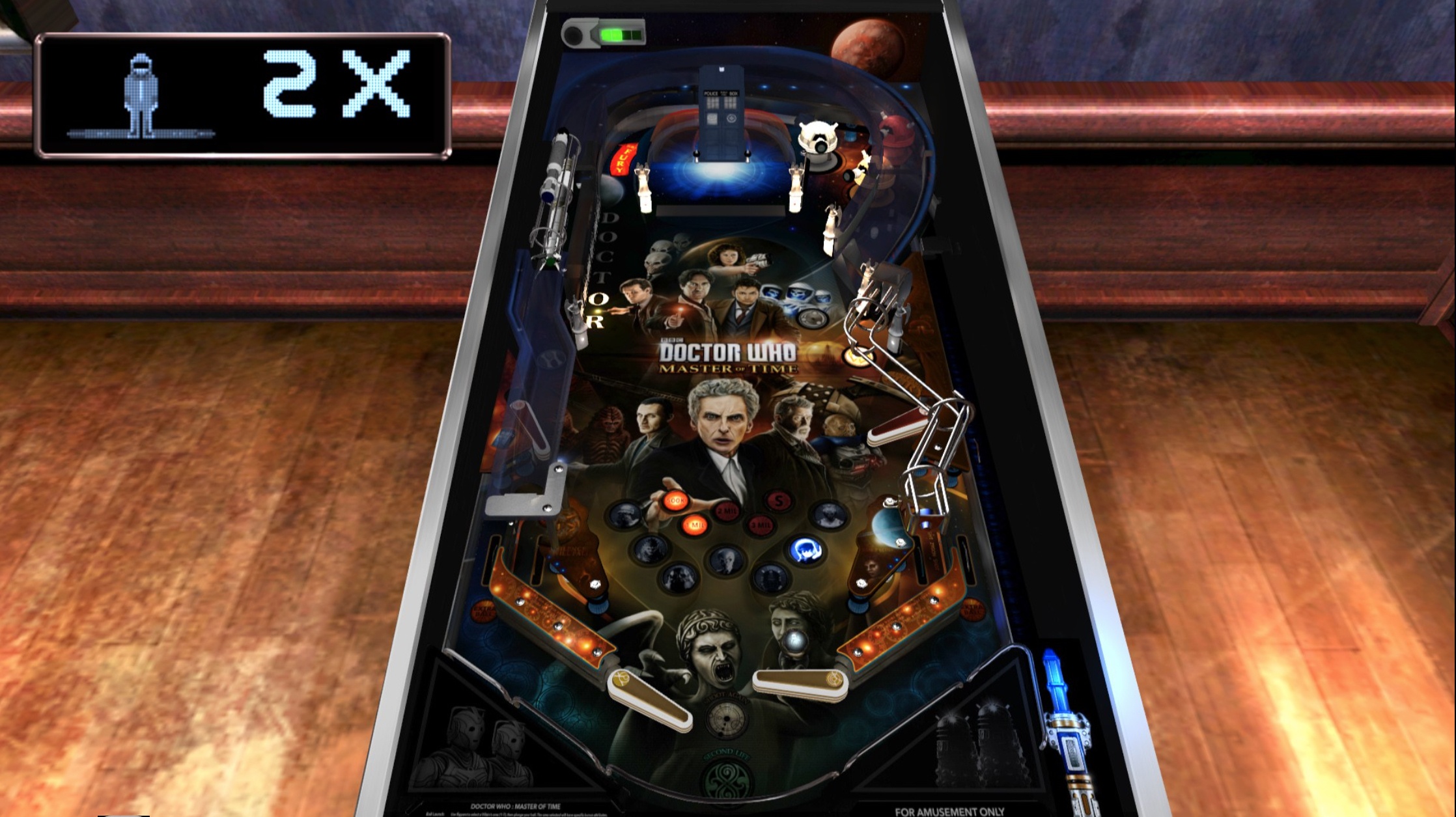 Branded tables are something that can make a pinball game really come to life, and, in several instances, help overshadow glaringly boring tables with adventurous and iconic characters. The Balls of Glory expansion for Pinball FX3 may not be everyone’s cup of tea, but it’s universally agreed that the handling of the series that get jammed into the four set are hilariously well done. Fandom, you see, is the fuel that keeps even the smallest flame burning long, long after the main kindling went to ash (Firefly, anyone?). So a Doctor Who table for The Pinball Arcade seems like a smart move on Farsight’s part, at least from an outsider perspective. Doctor Who is easily one of the most rabid, loyal fanbases out there, and spans several decades. What better brand to yoke to a DLC pack?

Out the gate, Doctor Who: Master of Time has a lot of promise in terms of delivering for fans. Set in the most recent arc, the table features actual voice clips from Peter Capaldi (the Twelfth Doctor) and Michelle Gomez (Missy/The Master) and has a mostly believable storyline. After all, making a table where you play the Doctor, and you’re trying to take down the Master, is like creating a video game where Mario is trying to foil Bowser “someplace at some time.” It probably happened, and it’s not like it’ll affect the canon anyways, so why not dive whole hog in? Besides those characters, basically every iconic beast from recent memory shows up on the table as well. Cybermen, Daleks, Angels and more all appear in some variation, aligned with Missy and throwing themselves in your way. The promise is there, right down to an actual, miniature TARDIS that sits smack in the upper register of the table. What’s not to love? 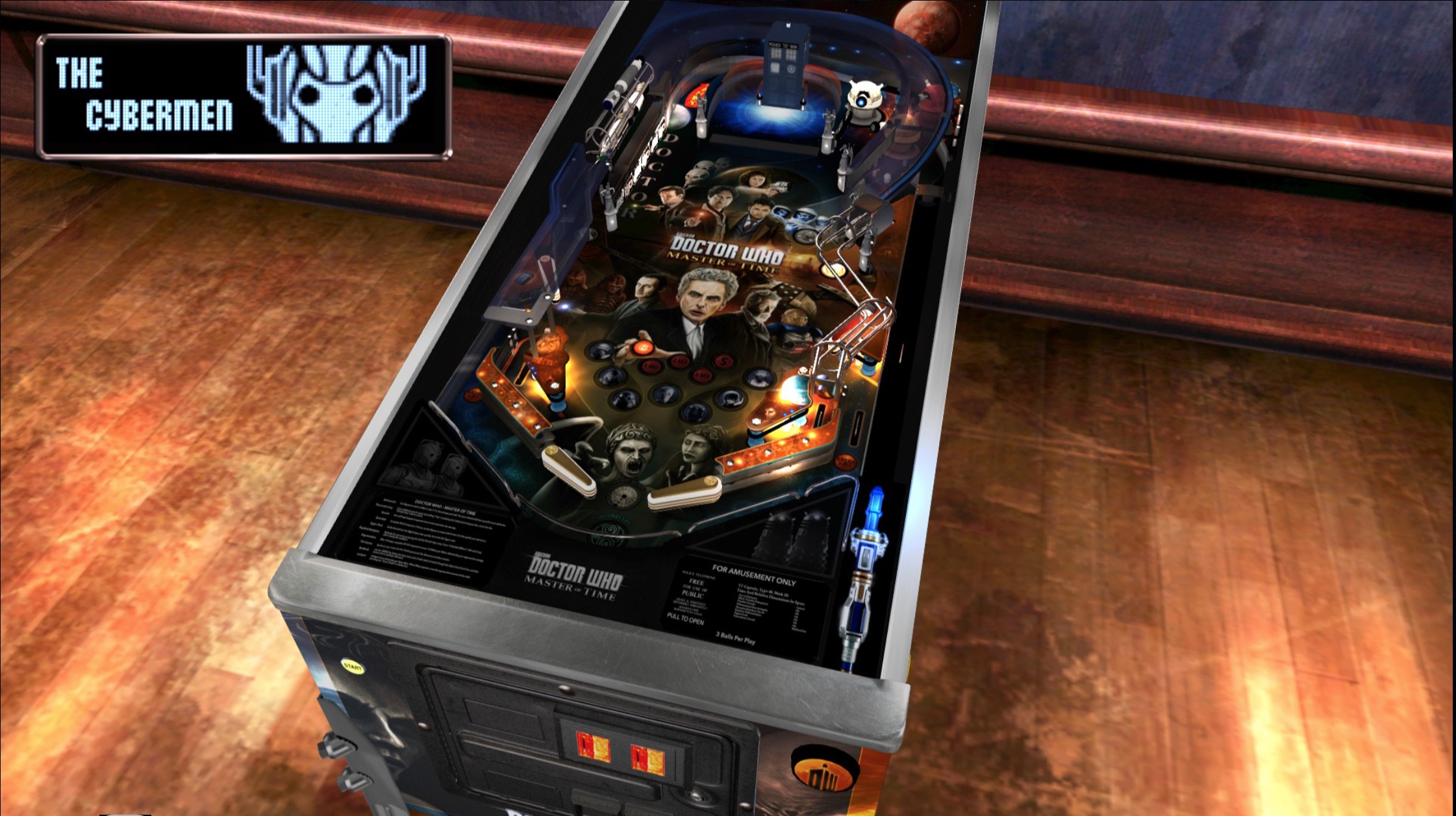 Unfortunately, there’s a lot, a lot to not love in this particular table. First and foremost, Farsight’s claim to fame is faithful reproductions of older tables a la Stern and making sure things are grounded in reality. That’s not to say Farsight is forbidden from making original tables, but I think there are certain ideas in place. For example, if you’re going to be making your own table, and it’ll only exist as a digital entity, you gotta go for the throat. Zen has really gotten this down to an art with ridiculous, physics bending designs and unreal representation of what you can do with a singular table. Some people scoff at that, claiming that classic pinball is the way to go. Fair enough: Star Trek Pro on the Stern side of things shows that you can have a real table, using real mechanics, create a successful, flashy and engaging table.

Doctor Who: Master of Time does none of these things. It’s an incredibly bare-bones table with one of the most impressive things being that the TARDIS lets balls fall into it and, on occasion, Cybermen will pop up to block you from entering said TARDIS. In the meantime, you shoot around a dark, surprisingly bare table that asks the player to continually arc in the same lazy shots, occasionally hitting bumpers and having the same voice clips play over and over again. When I activated certain “quests” or events, I wasn’t always totally aware of what triggered them, as there was a small blind spot in the upper right that I think a bumper or even a slot was hiding. At some point, I started to get frustrated, and then I had the passing thought “Maybe this is just for Doctor Who fans.” 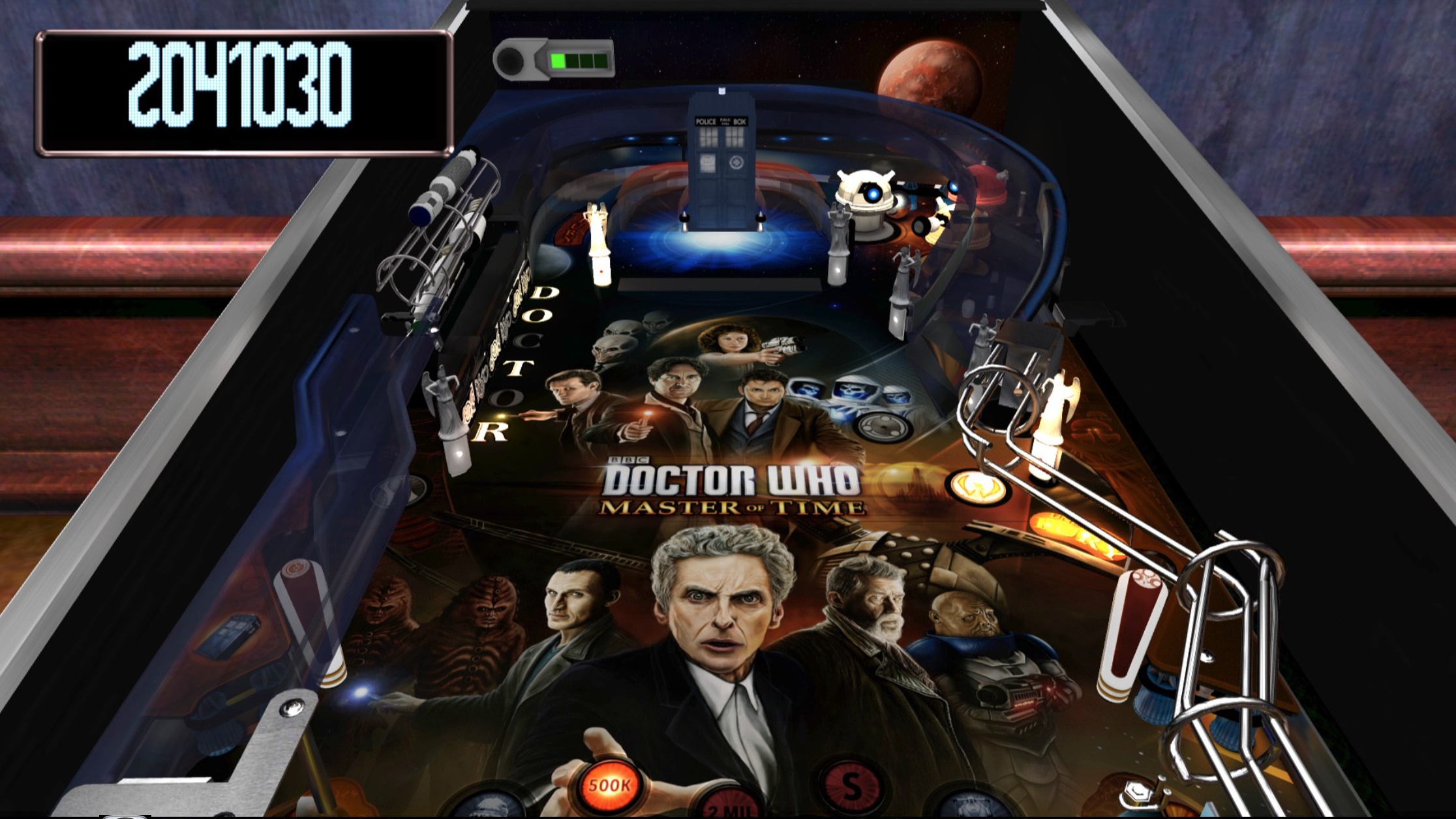 But the problem is Capaldi is one of the lowest rated and received Doctors since the reboot, beating out only Eccleston in popularity (and given that Eccleston did only one season, it’s hard to say if that’s a feat). In fact, a vast majority of the fan recognition that goes into this table is superficial at best, playing into the most overly done tropes of the show to keep hammering home that, yes, Doctor Who and Missy are both in this. It never really gelled with me, and, sure, I got some crazy high scores, but that was just through obligation and perseverance, two things you should never associate with doing something as a free time hobby. If someone woke up and though “goddammit, I gotta go collect stamps today,” you’d tell them to quit that immediately and take up something healthier, like street fighting.

The last note of it all (positive or negative) is that it’s a DLC of a single table. I’ve gotten spoiled by these DLC packs that come with a minimum of two tables, and my first for Pinball Arcade had a record five within. You need at least two tables so that, if one is kind of mediocre, you can balance it by saying “But at least it has this other table.” Here it’s all or nothing: either you’re going to love Master of Time or you’re going to be really pissed that you needed to download the free software first, then download the DLC, and then uninstall the whole thing. From head to toe, Doctor Who: Master of Time just felt vastly uninspired and kind of directionless. Too flashy to be a classic table, too barebones to be a digital table, and no Jodie Whittaker to get fans really excited. If you must have all things Doctor Who, then I guess you can’t be persuaded to do otherwise, but, if you need pinball in your life, there are many, many other choices.