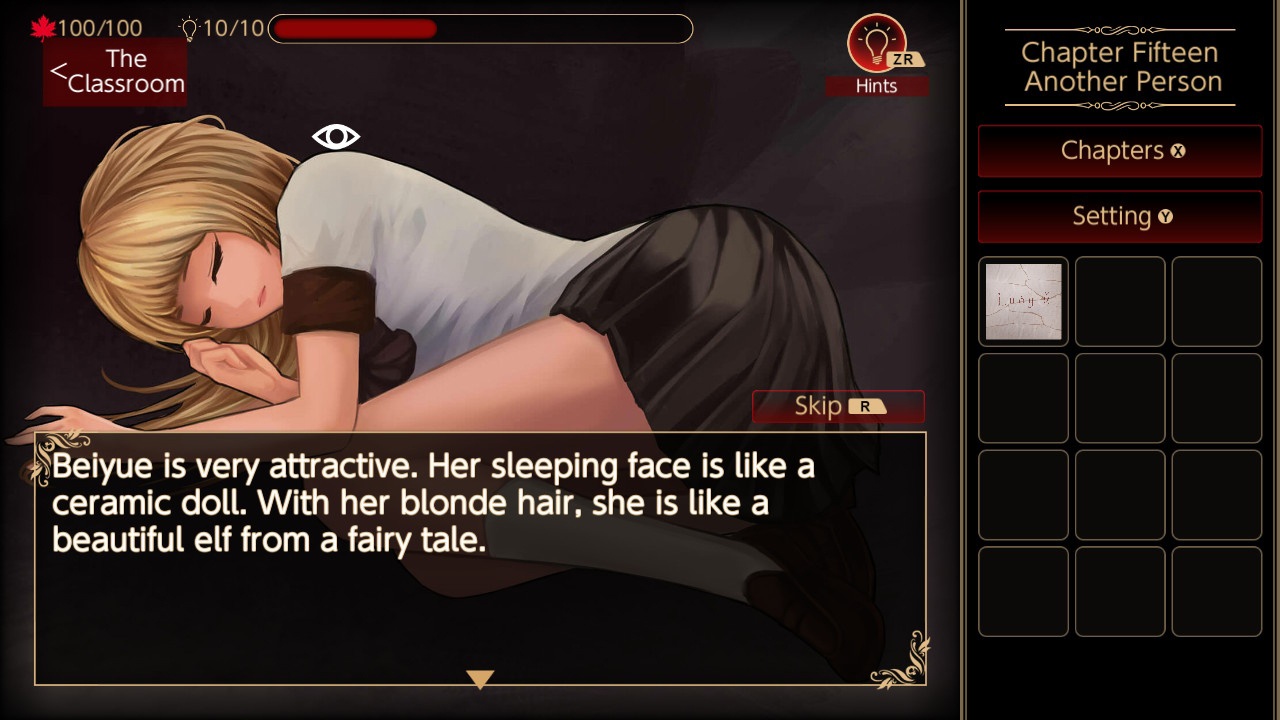 There’s a certain level of mystique that many people, including myself, give Asian horror titles. Not just Japan, which has cranked out movies, animations and games that truly scare the pants off people: something in the East taps into a more primeval horror sense that resonates a lot better than most of the Western “slasher” approaches. When I got the opportunity to play Detention recently, and The Coma Recut, I was giddy with jumps over how the stories played out and how scares were mixed into mythology. As a result, I didn’t do my homework when Defoliation came across my desk. I just saw Rising Win Tech, some “suspense and horror” buzz words and installed it without a second thought.

Defoliation is a slightly confusing story about a girl, her brother and her best friend who live in the countryside and visit an old woman on occasion. You’ll notice the lack of names in my introduction. That’s because, shortly after arriving at the house one ominous day, the three are struck with a sort of amnesia in which they remember their relationship, sort of, but forget names and a bunch of details. As a result, they decide to dub themselves Wood, Grass and Leaf to at least have identities in the meantime. The house is now surrounded by dark clouds, everything feels weird and scary, and we need to figure out what has befallen this kindly old woman, her granddaughter, and our heroes. And what’s the best way to do that? Some incredibly convoluted puzzles, random “bad ending” deaths and a lot of robotic scripting.

Defoliation plays in the style of a hidden object game mixed in with a lot of various puzzles that crop up in semi-organic and very inorganic methods as well. As you delve deeper into the home, you’ll realize each room and second is partitioned off with several numerically based puzzles, usually culminating in a combination lock of some kind to reach the next room. Interestingly, these locks can’t just be memorized and call it a day: you’ll usually need a series of gems (which are referred to as bolts) that act as conduits to allow the passcode to work. These gems are hidden behind other puzzles and you get the picture. You’ll have a little flexibility in how you solve the puzzles with a couple of glaring exceptions. One, you’ll absolutely need to do all the puzzles in a room before ultimately getting through to the next room. Two, there are a couple of instances where puzzles need to be solved in a race against the clock before you get dead murdered by something. That something is pretty intangible and vague, but this is a horror game: just swap in whatever boogeyman fits your mood for the day. 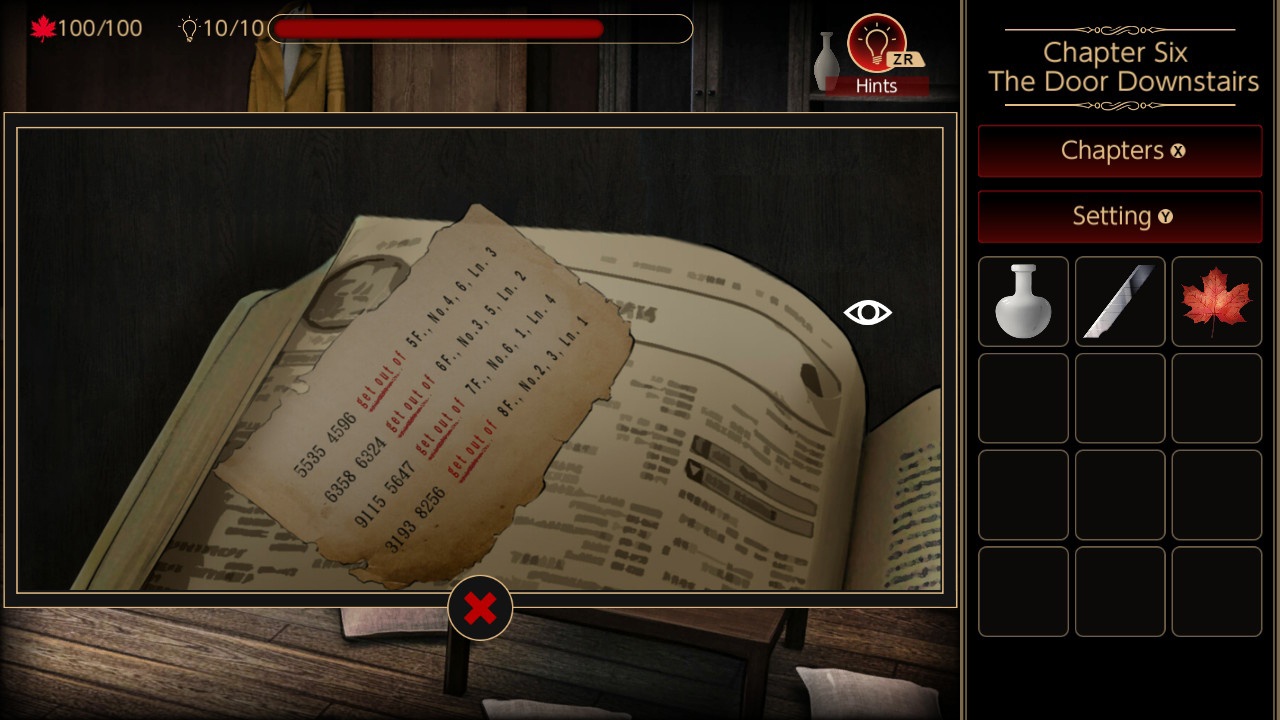 Now, there are some things that Defoliation does very well. In terms of what the developers are going for in storytelling, the pacing is actually pretty good. Moving through the rooms of the house, slowly watching reality shift, finding persons unknown and getting some answers (even if they are less than satisfactory) are all done in a great speed and release. The chapter division really works for the tale of this world gone wrong, and I quite overall enjoyed the actual story that was going on. Even though the banter between the characters was pretty flat and expositional at times, it still served as a good framework for most things. In fact, I would argue that, if Defoliation was done as a straight visual novel with some choices mixed in and a bit more detail work, it would be really well received. There are some elements that NEED the puzzle factor in order to work, so I understand why the game is done the way it is, but, sadly, the game itself is the loose thread that undoes all the hard work.

Firstly, there isn’t really a great consistency to the logical setup of the puzzles. One of the very first puzzles you encounter, in which you need to extrapolate a numerical sequence from a window filled with numbers, makes exactly zero sense. I had to go online and find a video from a Chinese YouTuber just to understand the how and the why of the code, and it still didn’t totally make sense to me. Later on, there are some puzzles that straight up rely on Chinese history and lore in order to understand why you should answer a puzzle in a certain way, which the devs, bless them, did their best to localize without straight up rewriting the puzzle. I feel like more than a few puzzles are based on understandings of mathematics and logic that don’t quite align with my own style of thinking, and I’m hesitant to say that it’s due to my own cultural background, as I am a stupid man. Therefore, I’ll simply leave it as “some puzzles are quite tricky.”

This would be one thing if the hint system worked, but, sadly, most of the hints are incredibly vague and less-than-helpful. You get things like “let’s look at the window to figure this out” or “we have to find the answer in time!” At one point, I was told “we should use the rag to wipe off the dust.” What rag? I had no rag at the time, and, truth be told, I figured out the puzzle before finding the rag, which pissed the game off. It gave me the bolt but basically force skipped ahead the dialogue as if to say “Fine, I guess you’re in a hurry.” The hints also are limited but recharge over time: this is carryover from when the game was originally released as a mobile title and, surprise, hint recharges could be purchased through IAP. I’m very, very grateful that IAP doesn’t exist here, and maybe the cool down timer helps prevent people from just mashing the ZR button over and over again to make things work. 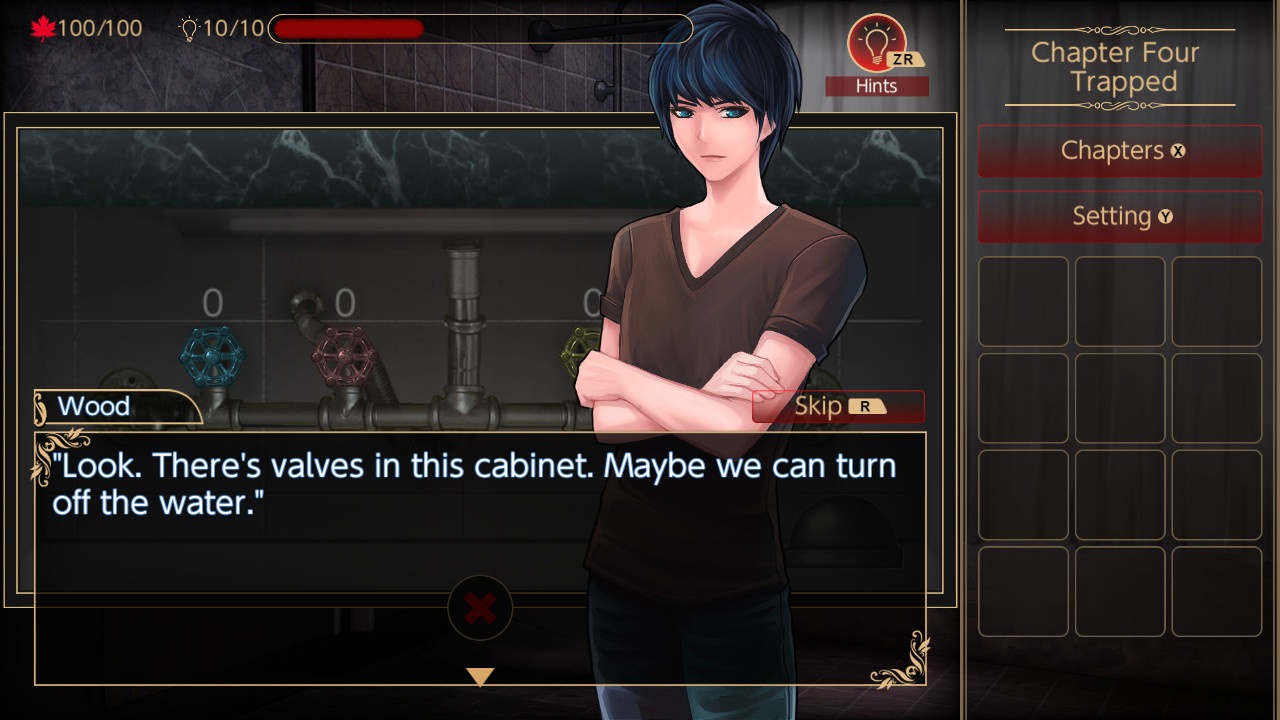 There’s also this odd phenomenon regarding the maple leaves, which are a key point of the Defoliation storyline. There are actual maple leaves that work into the plot, but there are also one hundred hidden maple leaves throughout the game, some of which you find just by randomly clicking on stuff. Like, incredibly random things, some of which don’t give you any dialogue or items or clues, just a maple leaf, which means “pointless clicking” gets rewarded. Additionally, some leaves are only obtained by purposely choosing the bad endings and getting your dumb ass killed. It’s a nice incentive to explore all of the story, but you feel silly when you are stopped, multiple times, and told not to do something, but you say “screw you, I know what I’m doing” and then die. My advice is to get these bad endings out of the way as soon as you enter a chapter so you don’t hamper your overall success.

When you toss in the rather wonky and mechanical English translation of it all, Defoliation gives an incredibly strange and borderline uncomfortable experience from start to finish, but not in the way the game is intending. You will spend a lot of time on the game,but that’s because you need to sit there and try to work out what the hell the developers intended for the puzzles. You’ll understand what’s going on, but still feel like it’s being told to you, secondhand, by someone who is slightly out of breath and a bit fuzzy on details. The replay factor seems incredibly low, if only because, in order to experience the story all over again, I have to do all the puzzles again, and some arduous situations (like bizarre mazes) are unskippable and require time and patience. If you’re a fan of puzzles and really want to have your logical mind challenged, Defoliation seems like it could be a great fit for you. However, if you’re more in the market for something scary, you’d do best to search elsewhere: there’s too much time between bumps to keep the stress high.