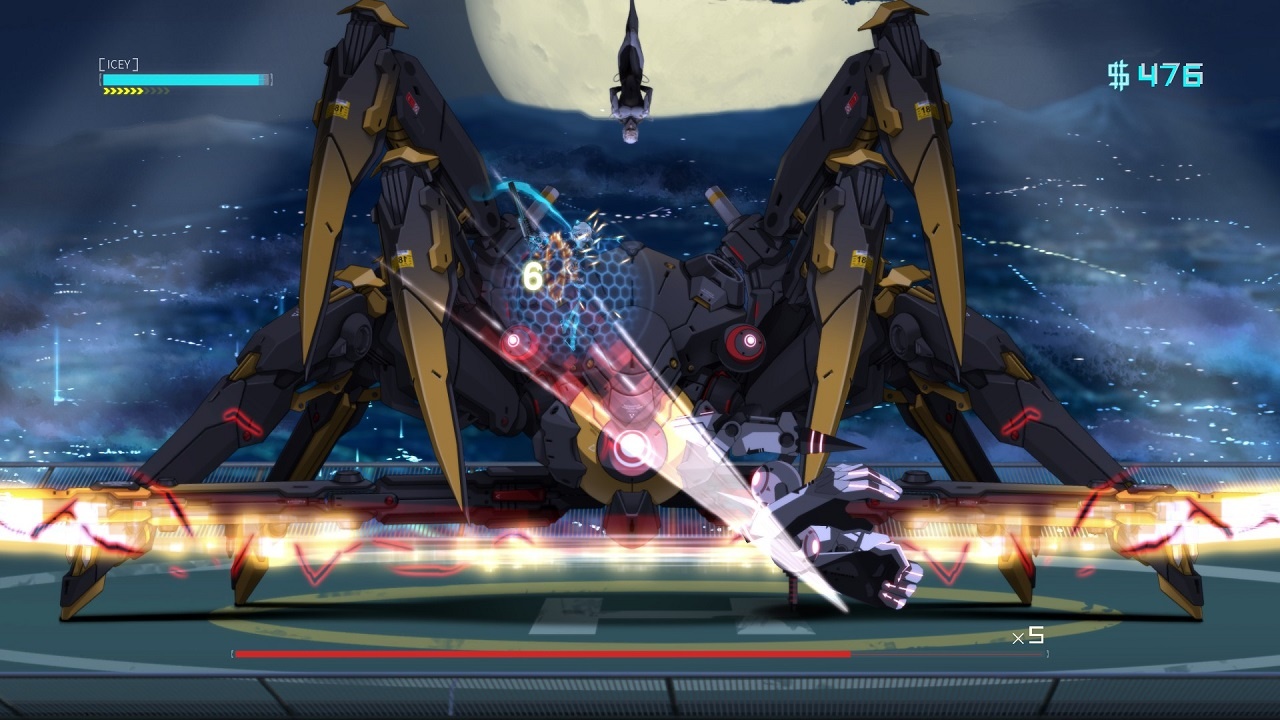 The very idea of anything meta is always a very tenuous and dangerous realm to enter into. Even though the word gets tossed around pretty casually when you spend long enough on the Internet, the actual execution of the idea is something entirely different. People often confuse breaking the 4th wall with meta, which are similar but still separate entities. Wikipedia’s entry on Wikipedia, for example, is some good meta. Deadpool talking to the comic book audience…somewhat meta. Meta, strangely, applies best when it comes to games about games, specifically games about themselves. Game Dev Tycoon isn’t meta until you make a game called Game Dev Tycoon (or if you’ve pirated the game and then get your ingame sales hurt by piracy…or is that irony?) In any case, players are wise to approach a game that wears “META” on its sleeve a bit too loudly, as was my intro to the 2D hack-and-slash ICEY.

ICEY sets the stage as putting you in the shoes of the titular heroine who may or may not be a cyborg, on a quest to stop an evil madman known only as Judas. Judas has plans to essentially bring all the world under his command through a sort of cybernetic mental link, and you’re going to stop him. Probably. I mean, the main idea here is a bit less about getting to the objective that you’re set upon and, instead, seeing where you can end up when you take the paths you want. Despite what the narration may ask, beg and demand of you. Oh yes, ICEY is unabashedly, full frontal meta.

What’s interesting, from the very beginning, is that ICEY has a lot of legitimate hallmarks to a good, solid if somewhat well-trodden game. You have an awesome sword, a light and heavy attack, the ability to dash to avoid getting hit and you use visual cues for when a counterattack is coming and when you can engage the opponent in a finishing blow. Before you learn even a single thing about the actual plot of ICEY, you’re given a chance to familiarize yourself with the controls, and it’s a really smooth, clean execution of things. When you seriously get into the flow of a good combo, singular enemies don’t stand a chance: you can literally hover in air and keep bouncing them off the ground while smacking them around until you deliver the death blow with no damage received. Naturally, you end up fighting a lot of enemies in waves to help prevent you from having an overpowered, boring go at things, and the enemies have plenty of variety in their attacks. From long ranged assassins to simple grunts, complex brawlers to pesky fodder, you have a bit of everything, leading up to some fairly impressive bosses. 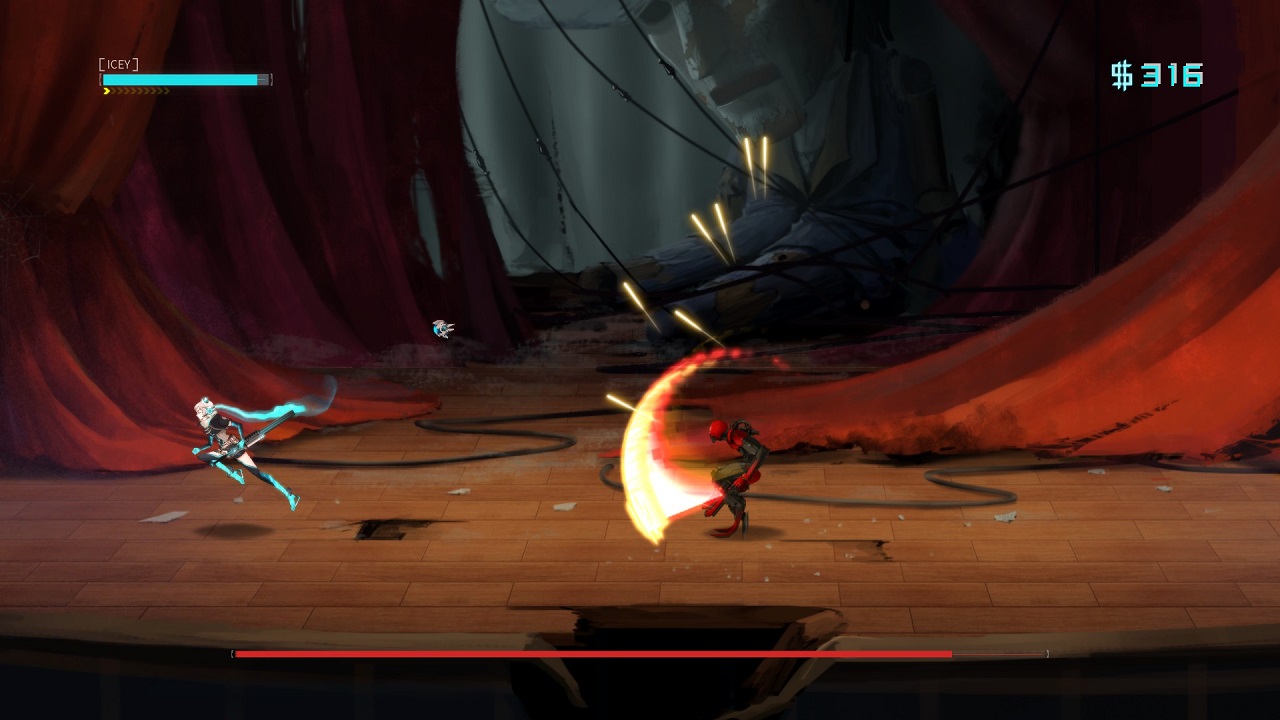 ICEY also allows you to grow and evolve as time goes on thanks to combinations of save points and skill shops. The money that you get from slain enemies and from random finds goes towards improving the skills you have, as well as unlocking new and unusual skills. It should be noted that you can get through the whole game without needing to unlock any of the extra perks, but there’s not a great reason to. Players should definitely save up to hone their existing skills to higher damage rates and even max out their HP/recovery, because it does assist in a lot of the longer battles. You can recharge HP by doing the finishing blow to most enemies, but having some extra in your reserve instead of counting on enemies to drop it is the better choice.

So, if ICEY were merely a side scrolling button flurry, it’d still be a great game. But what ICEY does best is it’s trip down the rabbit hole. Shortly after beginning, you run into a dead end and the game “crashes,” a scenario that is slightly less believable on the Nintendo Switch (but still quite enjoyable). What happens next is the first step down a long, complex and sometimes hilarious road of confusion, panic and outrage at the hands of the developer. There’s clearly some kind of divide between the vision the developer has and the game you are choosing to play, and you can, naturally, follow all of the narration (the voice of the dev) to the very end and play the game they intended for you all along. No harm, no foul, and it’s a good trip from your first step to the final encounter with Judas atop the Clock Tower. And you should probably consider doing that at least once, if only to see what the game is “supposed” to be.

However, it takes very little to end up going way, way off the reservation and ending up where you shouldn’t be. Disregarding the arrows, it’s fairly interesting and even exciting to discover parts of the game where you shouldn’t be yet, or where the game hasn’t been finished, and then being exposed to the befuddlement, wrath and, eventually, insecurities of the creator. You pull back the curtain to discover there’s this whole other layer to the game that paints Judas out to be a real person, that ICEY’s purpose is more than to simply be in the game, and that ICEY might even be more than she realizes. Discovering all the truths and all the facets that come from the game is truly fascinating, and the achievement list helps chronolog all the things and discoveries you make along the way. 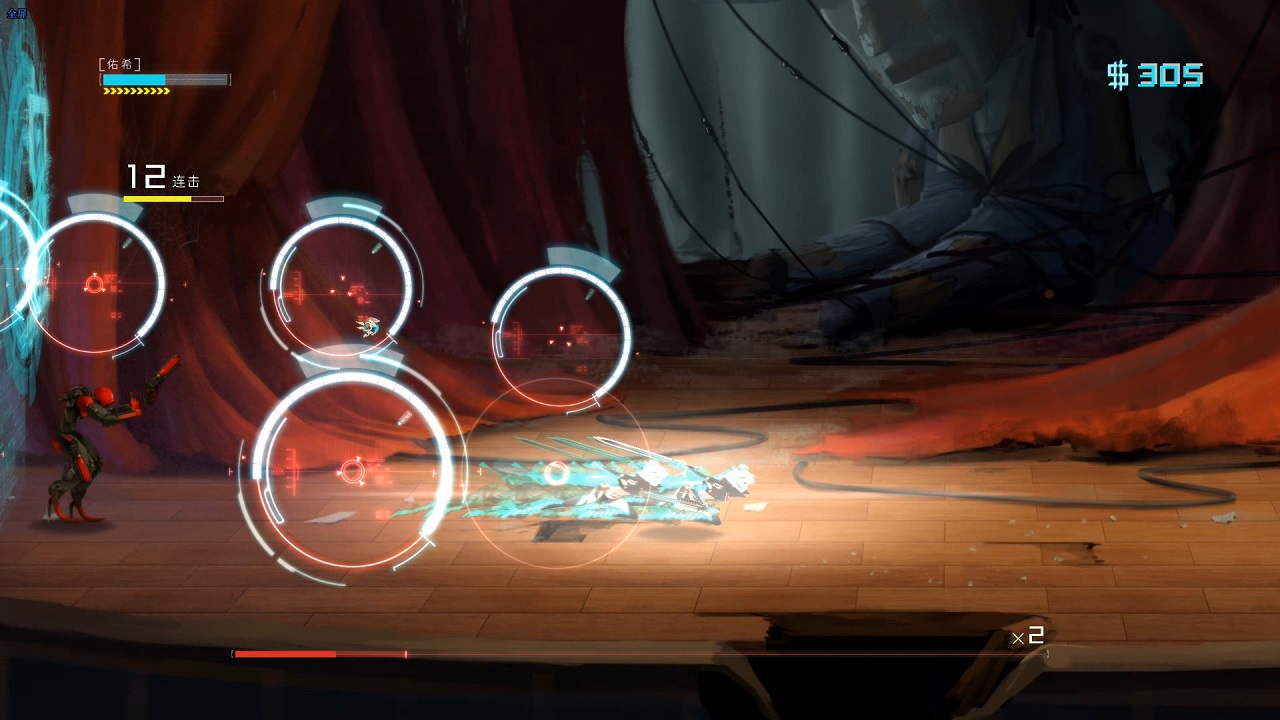 Of course, such heavy meta does come with a price. For one, there are times in ICEY where the disbelief from the developer comes across as incredibly hammy and insincere. After the third time of me going against the grain and trying something new, how on earth could you be surprised that I disregarded your advice? The tone shifts eventually, but there was this whiny period that made uncovering the meta a bit unpleasant because I knew how the creator would react.

Additionally, the game, when you strip away the meta, is pretty short. Even with all the meta moments and achievements, this is a couple days worth of play, maybe just one day if you’re invested enough (which most players will be). The Switch port is well done, with some good handling, a little slowdown with heavy mob spawn (the battle against Parker springs to mind) and some decent rumble implementation. But if you’ve played this before on Steam, there isn’t a ton that’s new, at least not from the core of the game, and many US Steam clients already have ICEY due to the fire sale last year that included a heavily discounted Steam Link. I forgot I already had this game until something in the name clicked.

But I hadn’t played it before, and, as the developer mentioned in the meta, why not buy a second copy to support his hard work? In all sincerity, ICEY is a pretty trippy experience that’s nicely balanced by a furious, articulate slasher. If you haven’t played the game before and would like to try something truly different, I highly recommend grabbing it on the Switch, so that you can bring your curious sense of morality and existence wherever you go!