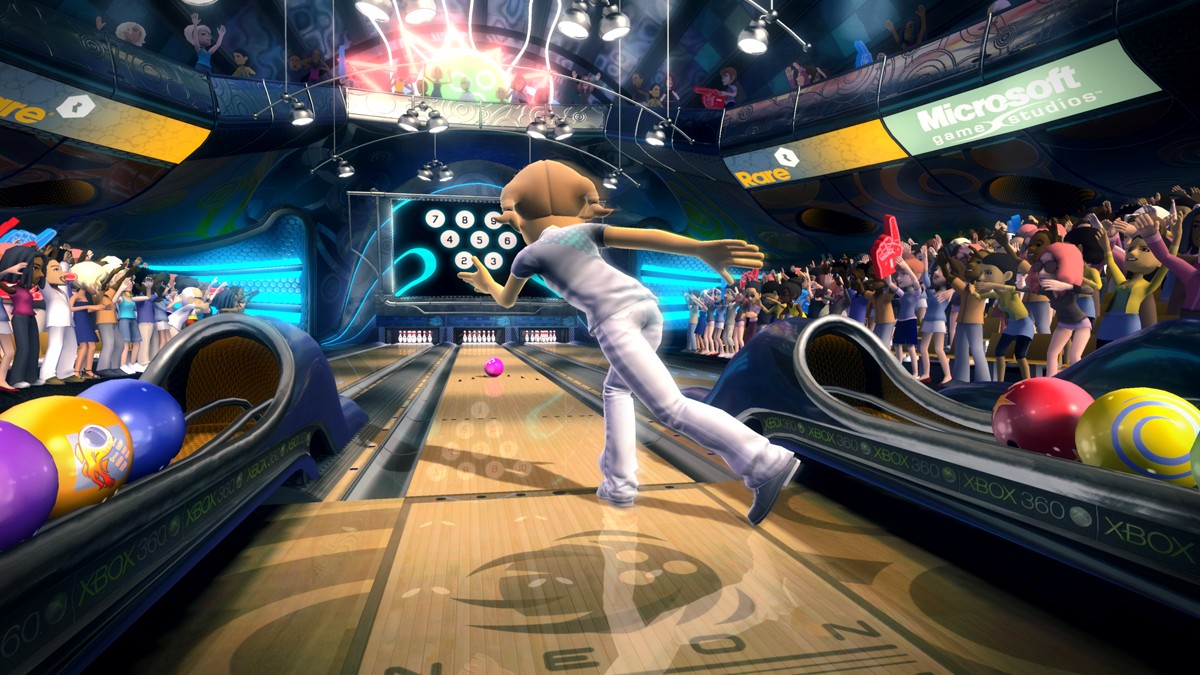 There’s a hell of a lot riding on the success of Kinect Sports – other than Kinect Adventures which comes packaged with the device, Kinect Sports will be the first title that the large majority of early adopters are likely to pick up. Not only does it have to be an enjoyable game in its own right but it also has the added pressure of needing to embody everything that is fun and exciting about Microsoft’s new tech, while subtly hiding any potential weaknesses – basically, it has to do what Wii Sports did for the Wii four years ago.

Although it rather unashamedly apes Wii Sports in both design and, to a certain degree, aesthetic style, Kinect Sports does just enough to differentiate itself and more importantly, to fulfil its role as the Kinect red carpet; welcoming all to Microsoft’s new technology with a warm, user-friendly embrace.

Each of the six main activities, while ranging in quality from the so-so to the outstanding, are all extremely easy to pick-up-and-play. Be it Football, Track & Field, Boxing, Volleyball, Bowling or Table Tennis, each game has an easy to use interface that, despite the inclusion of introductory how-to-play videos, can each be deciphered at a moments notice. This is, of course, in part down to some clever design on the part of developers Rare, but it also showcases one of Kinect’s strongest assets – you basically do what you would do in real life.

Every game in the collection highlights this point perfectly. Although exaggeration is occasionally required, you essentially act as if you were in the game. Sure, the commands aren’t too complicated, but as a family friendly title that everyone will want to give a go, Kinect is hard to fault.

However, it should be noted that, while it may be a critique of the hardware rather than the software, the fact remains that, despite the general quality of the game, if you’re going to get the best out of Kinect Sports, you’re going to need plenty of room to do so. If on your own, you’re going to need at least 6 feet worth of space and if you happen to be playing with friends, as the majority of gamers will be, you’re going to need a good 8 feet to get accurate two player inputs. As long as you have that kind of space, then both Kinect and Kinect Sports work just about as well as you could have hope for. There is a very small amount of lag at times, but this is subtly and skilfully masked by the good folk at Rare to the point where it is all but unnoticeable.

Of all the games, the one I was most keen to get my hands on (body on?) was football. More than any other game in the package, it had the opportunity to stand out as an experience that could only be achieved on Kinect. It doesn’t matter how accurate Move is or how many pluses Nintendo add to the Wii remote, the fact is, they will never be able to do football. Although player movement is wisely handled automatically, for the most part, the simple pleasure of choosing passes, making defensive blocks and scoring spectacular goals using your whole body is an experience quite unlike anything else. It’s not perfect by any means and some will argue that the onscreen prompts make the whole experience a bit too simplistic, but get a game of this on when your friends are over and I will all but guarantee fun. Oh, and it’s officially the first football game ever in which playing as the keeper is fun. 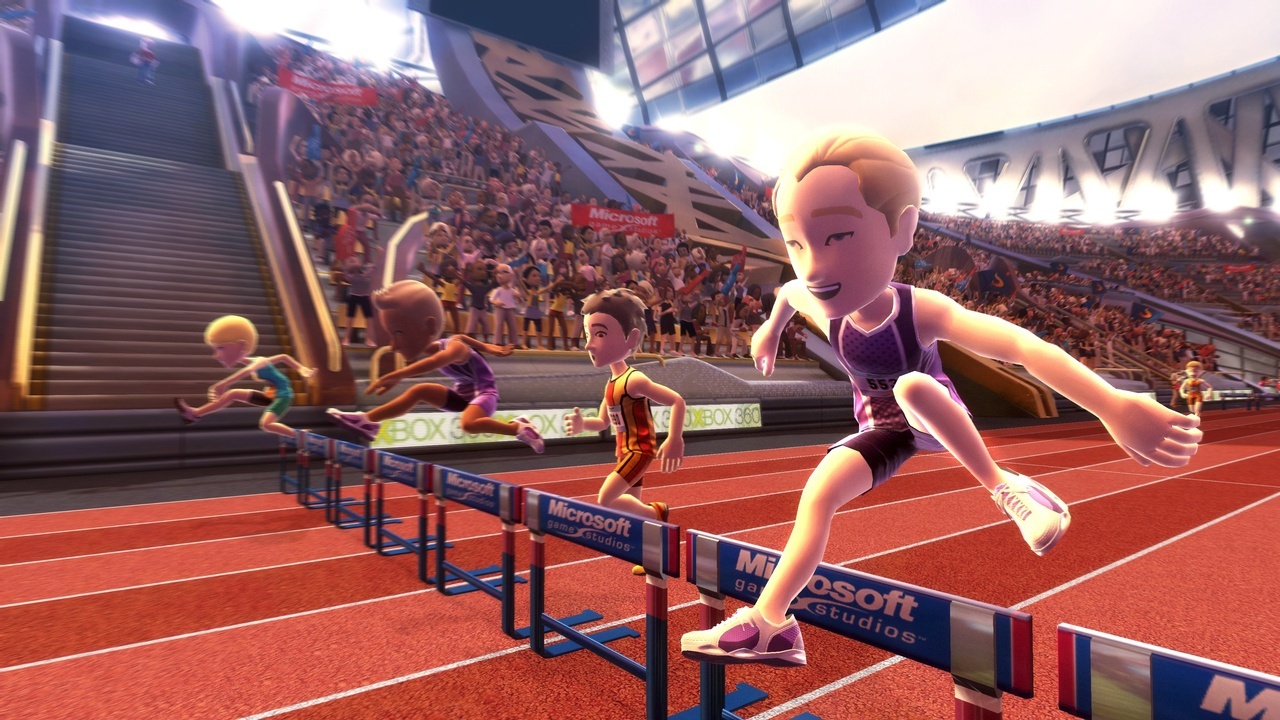 The other game mode that feels immediately unique to Kinect in both design and execution is Track & Field. Although down as one sport, Track & Field is separated into 5 individual events; Javelin, Discus, Long Jump, Hurdles and Sprint. Of all the events in Kinect Sports, Track & Field is unsurprisingly the most physically demanding – other than the discuss, every other event requires you to run on the spot to pick up speed – speed being related to how high you lift your knees. On top of that, natural motions such as timed jumping for the hurdles or throwing for the javelin need to be incorporated for success. Every event works well and, like football does a great job of showcasing the unique experiences that can be achieved with the tech.

Of the more old-school efforts in the collection, bowling once again cements its position as the king of casual gaming. It may have been done before and arguably even better in both Sports Champions and Wii Sports, but bowling once again proves that it’s the perfect living room sport when it comes to motion-controlled gaming. Even without a button to control release, Kinect Sports’ take on bowling feels surprisingly accurate and, like previous efforts, is a huge amount of fun. It may have been conceived as little more than a tick on the back of the box but it’s one of those games that you and your friends are likely to keep coming back too.

Like bowling, table tennis suffers from some minor accuracy issues. Exaggerated movements are needed to get consistent spin and the direction of shots does feel occasionally random. Still, the fact that your character moves with you towards the table for more subtle efforts and further away for fast-paced rallies certainly adds an extra layer of realism and, despite its faults, table tennis is a great bit of fun when played with friends – even if it isn’t the best showcase for Kinect’s capabilities.

The other two events, volleyball and boxing are without question the weakest games of the bunch. Boxing, which could have been absolutely fantastic using the Kinect sensor, simply doesn’t feel accurate enough – success never feels linked to form – it’s more a matter of who can flail their arms around the most, and with no option for side-stepping or dodges, it feels like a painful waste of potential. Volleyball, while not quite as bad, also fails to capture the athleticism of the sport due to its emphasis on hitting the ball rather than any form of movement. With spikes, serves and returns your only real options, it’s little more than a matter of following the on-screen prompts….it’s also a pain if you have low ceilings – jumping for spikes is no fun when you’re 6’6” tall.

All 6 of these games can be played online, although each one only supports up to two players locally at a time. Saying that you can play volleyball, table tennis or football in a team of two against other players online – this, as you can imagine, can get rather heated. Like much of the rest of the game, any potential lag is well hidden and online games tend to run smoothly.

In an attempt to add a bit of variety to the package, Kinect Sports features a collection of 8 mini-games along with the option to play any of the 5 Track & Field events individually as a single event or as part of Party Play Mode, which caters for up to 12 players. The mini-games are inevitably something of a mixed bag, although it has to be said that there are certainly more hits than misses here. Highlights include Paddle Panic, a high-intensity two-handed take on table tennis, One Bowl Roll, which tasks you with taking out a collection of challenging spares, and the extremely addictive Target Football which has you taking penalties while aiming for specific points of the goal. This game, in particular, is made all the more fun by Kinect’s impressive ability to read your attempted shot type. 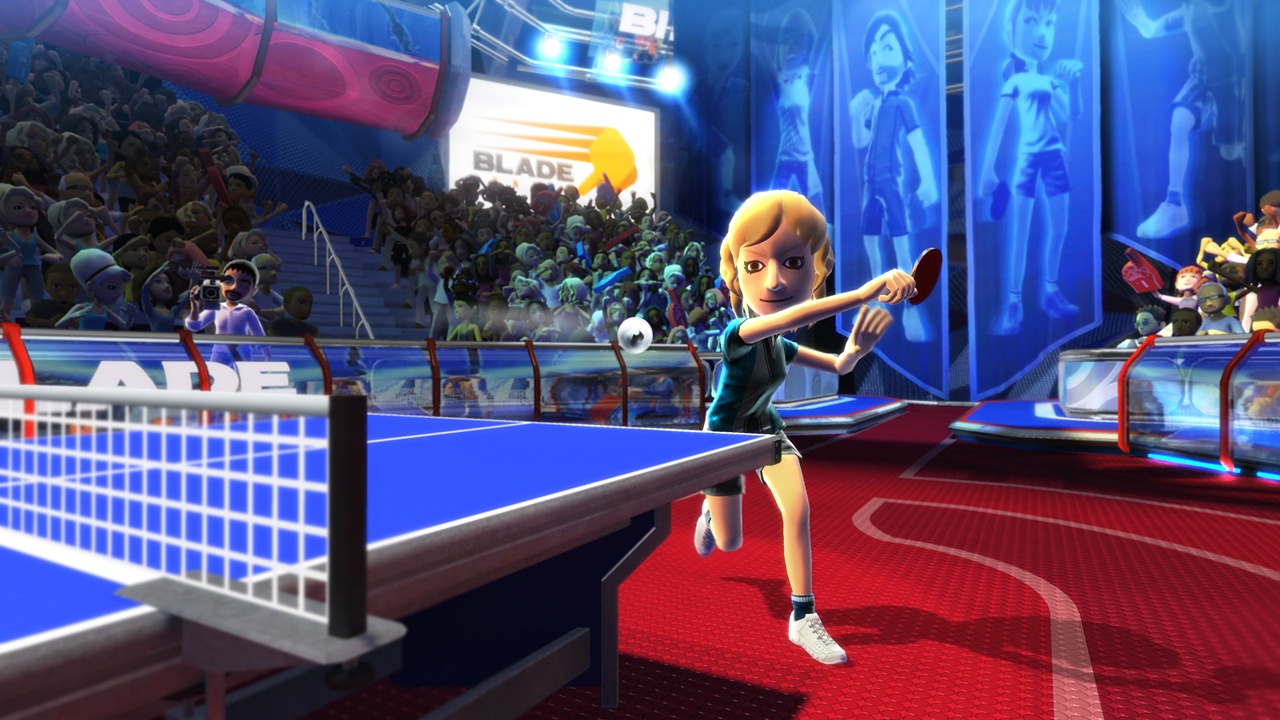 Beyond the core mechanics, one of Kinect Sports’ biggest successes is in its presentation. Whereas Sony’s Sports Champions felt like a sterile, characterless affair, Rare has wisely taken Wii Sports clean, bold colour scheme and added their own unique charm and character to create visuals that feel technically superior to that of Wii Sports without the need for the unnecessary clutter of Sports Champions.

Adding to the charm is the games seamless inclusion of Avatars that now look better than ever since the latest Xbox Live update. Although a simple enough inclusion, the ability to add unique movements both pre and mid-event give the whole experience a personal touch lacking from its competitors – believe me, the simple joy of waving to the crowd as you successfully take the last 10 metres of a sprint is an absolute joy.

Rounding off the games impressive presentational package is a surprisingly varied collection of licensed tracks that range from the pure cheese of ‘Let me Entertain You’ to the altogether cooler sound of ‘Hollaback Girl’. Whatever your take on the songs included, there’s no denying that, as an accompaniment to a party game of this ilk, they’ve been wisely chosen. Add to that the pleasing ridiculousness of the X-Factor’s Peter Dickson’s sublime voiceover work and it is genuinely hard to find fault in Kinect Sports all but the faultless presentation.

Although inevitably more energetic than the subsequent takes found on the Wii and Move, Kinect Sports nonetheless delivers a host of games that can be enjoyed by just about anyone…..well, you’re Nan might struggle with the hurdles. It’s essentially a great demonstration of what can be achieved with the hardware while leaving just enough room to imagine what could be potentially achieved further down the line. It’s far from perfect but I’ll be damned if it isn’t fun.