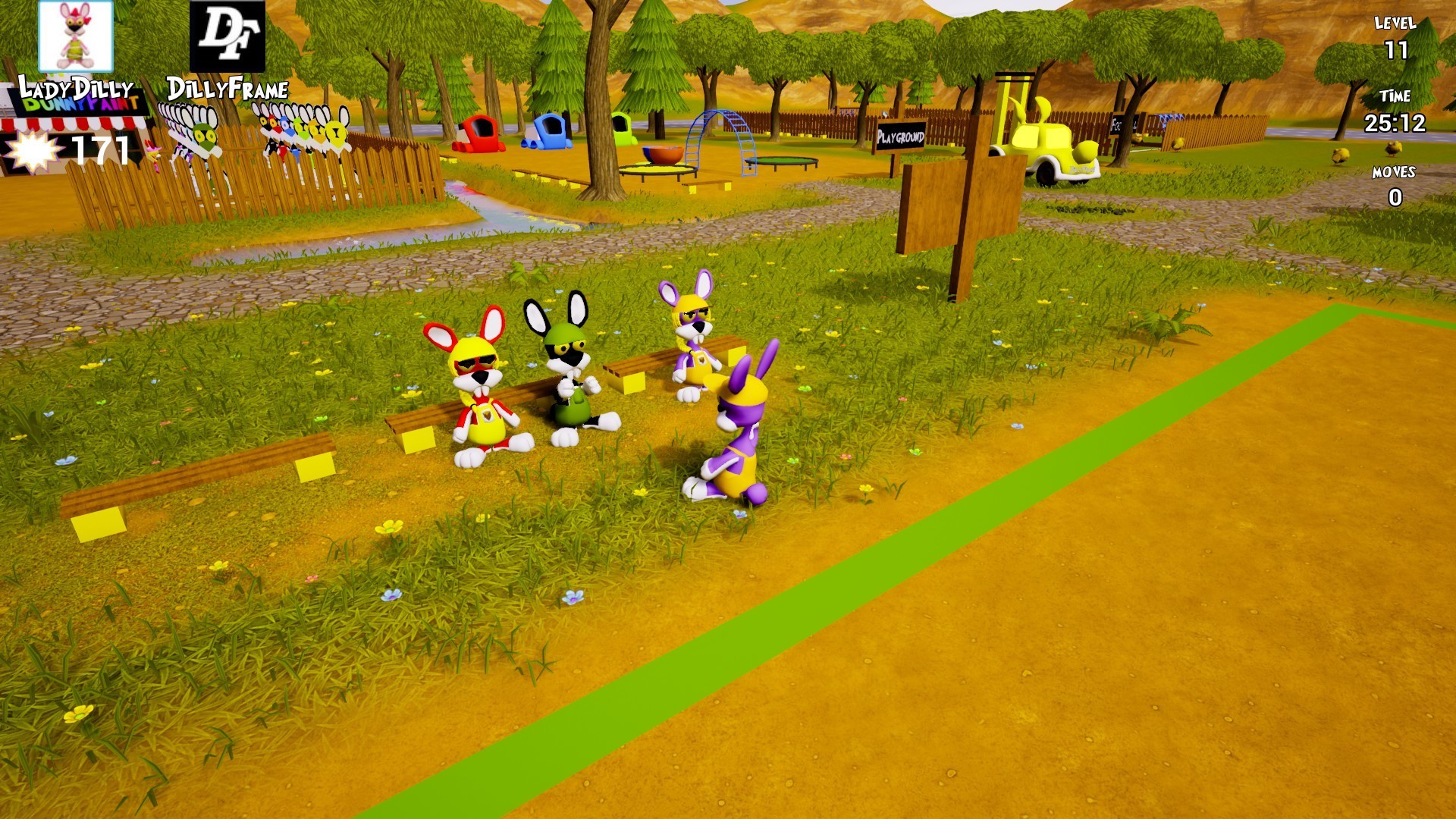 The joys of the Indie gaming market are the random themes, and the otherwise forgotten genres. The classic puzzle game rarely gets a look in these days with the world obsessed with First Person Shooters, and massive open world titles. Developers Dillyframe aim to rectify this one random project at a time. Their latest addition SokoBunny uses the premise of Sokoban to form the backbone of their gameplay. The task is to move crates around a maze to a goal zone, there is only a set number of moves, and if you make a mistake it may be irreversible causing you to have to rethink your plan, and start again.

You open up the action inside your factory, this is the main base from where all the puzzles can be chosen. A portal on the floor transports you to each level, you are given the choice of three different difficulties; Mini, Midi, and Maxi. Each mode follows the same model, find the end zone within the maze, and work out a plan that allows you to move all of the crates without making a mistake. If you happen to make an error you are allowed to undo one move, this can be a life saver, but if you discover a few kicks down the line that you’ve ruined the puzzle, then the only way out is restarting the whole stage. The main differences are the size of the play area, and the number of boxes which you have to shift around. The more things to move around increases the steps to be completed, and the chances that an error will be made. The latter levels really do become a headache, it’s an infuriating task, but yet oddly addictive and fun, in a sadomasochist sort of way.

The colourful world can be explored freely either in solo mode, or with friends in an online multiplayer. Don’t rely on random people joining your world, this isn’t due to any issues, its down to the number of people playing the game. A lack of “Couch” Co-Op was a big negative, and something that should really have been implemented. There are a number of activities to be completed around the map, from; playing football, swimming around a lake, colouring your character, exploring a hidden world inside a toilet, and playing in a park. NPC bunnies will interact with you as you walk past, you are free to ignore them, or give them a kick. If you happen to attack them, they will be relentless in their aim to retaliate. There is no requirement to do any of this, and it just adds to the randomness that Dillyframe has implemented. All of the additional tasks have no bearing on the gameplay, and act as a distraction to the puzzles. It can be completely ignored if you wish, but if you do so, you will avoid most of the achievements. I found that booting some bunnies around the world worked wonders for alleviating your frustrations. Especially after failing the same stage for the Nth time. 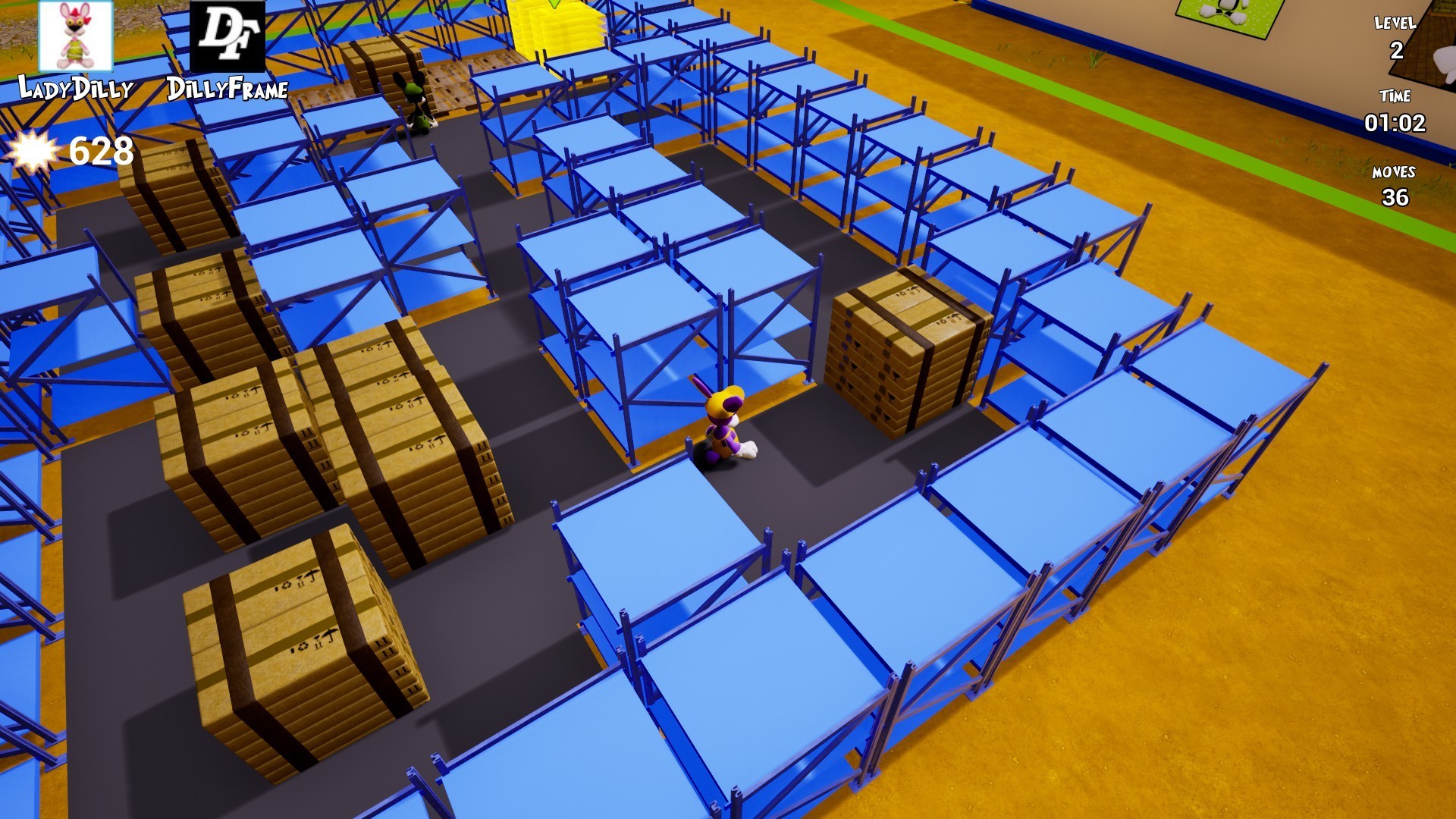 As you start each level, a maze of containers pops up in the middle of the world. Crates are located within this area, you must ensure that you leave a gap between each box, failure to do so will make moving them impossible, and will cause you to restart your task. The only things that should be found within the play area is; The players bunny, and the boxes. Unfortunately a number of glitches appear in the form of; random vehicles and NPC’s being stuck in the stage. The vehicles aren’t too much of an issue as they disappear when you walk through them. The problems arise from the NPC bunnies, they can be used to exit the maze, where you can re-enter and cheat your way to a solution. This took away all the challenge, and was a game breaker for me. What’s the point in playing a puzzle title, if you don’t have to work out the correct solution. The glitches are something that appears in a number of the developers other games, as this is the 5th project in the franchise you’d expect them to have ironed out these problems.

All of the bunny games have a unique, and dated look to them. The style is very bright and cartoony, but horribly rough around the edges. The animation of kicking and moving is slow, traversing the world causes numerous image clipping issues. Cars randomly appear and disappear, items are discovered stuck in mid air, or into the ground, it’s all a little weird and off putting. Playing in a 3rd person perspective is useful, and the free movement of the camera helps you to create a plan to complete each level. SokoBunny will definitely not be winning any awards for its presentation, if anything I believe it will put off more gamers than it will attract.

As well as all of the glitches, Dillyframe has a tendency to use repetitive and annoying music. You’ll be glad to know that they didn’t disappoint. The music adds absolutely nothing to the gameplay, neither do the sound effects. In my opinion you are better off listening to the first 5 minutes of noise, then muting the sound, it really is that bad. If the developers had added a variety of songs then it would be bearable, but listening to the same horrific track on repeat is like torture, and for me at least, distracted me from solving the puzzle at hand. 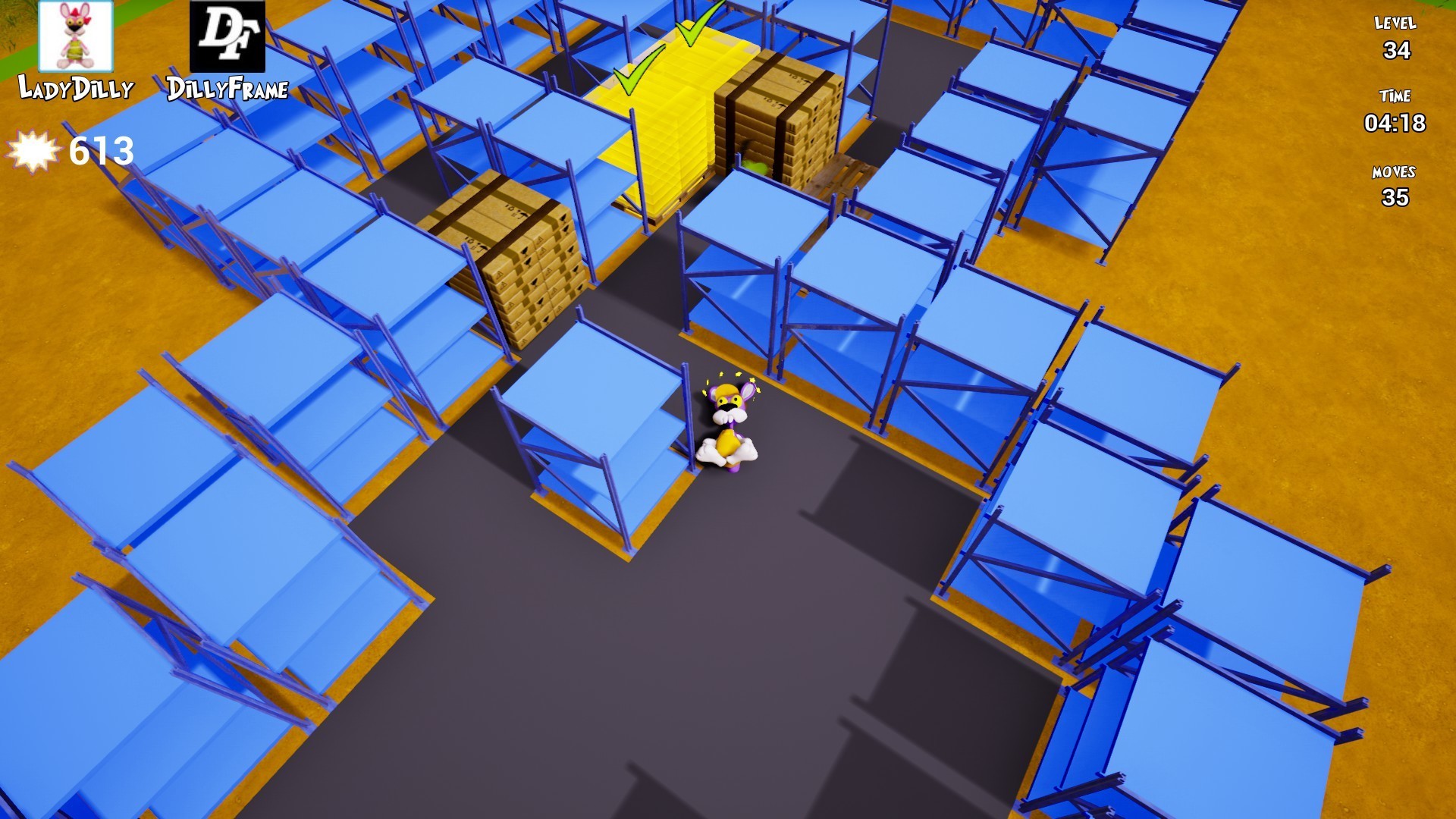 Simplicity is the name of the game, with limited actions to complete, the button mapping is unsurprisingly easy to understand. For the player that isn’t familiar with the franchise you can see a reminder of the button set up on the wall just outside of your main base. Anyone who fancies trying this can be rest assured that you will find the game very easy to pick up. Effectively all you have to do is move with the analogue stick, and kick with the RT button. By the end of the first Midi stage you will have a full understanding of the game mechanics, and will have mastered the controls.

Now that I have finished the game, I hear you asking, “Will you plan on returning to play?” Simply put, no. Luckily, all of the achievements can be found by simply exploring the small world, taking part in some of the activities, and completing a set number of puzzles. Once you’ve completed all of the stages, there is nothing else to do. The length of the game will depend heavily on your problem solving skill, and spatial awareness. I’m guessing you will be looking at around 15 hours to complete everything, but you could have the game done in around 5 hours if you aim to complete the bare minimum.

My friend on Xbox Live saw me playing this, and instantly asked me what it was like. I replied simply, “If you ignore the poor graphics, awful sound, and glitches, you actually have a good game, that is enjoyable to play.” I still stand by this statement, The developers have created an enjoyable puzzle game that represents Sokoban brilliantly, while maintaining their own unusual and unique style. If you can look past the negatives, then I believe you will have an enjoyable, albeit short experience, that will ensure an easy 1000G if you are so inclined. Time to run solo, or grab some friends to solve some puzzles, and waste some time in a dated and unusual world from the minds of the Dillyframe team.

What happens when you mix Sokoban with rabbits? You get SokoBunny of course! Control your Bunny to solve the puzzles, or just cause mischief in this dated looking, yet unusual puzzle title.