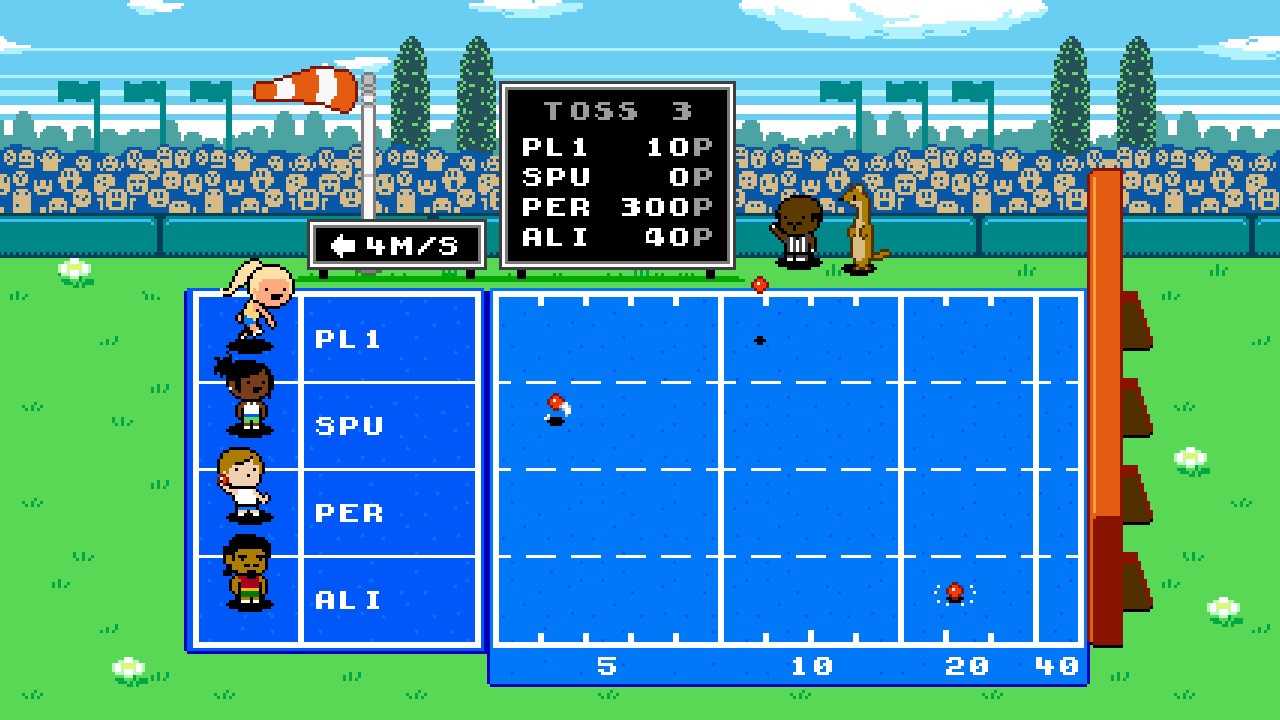 Back in the pixelated days of 8-bit gaming, I was a fan of joystick-waggling button-bashing multi-sports titles. Indeed, one of the first ever games I owned was Daley Thompson’s Decathlon and I would later go on to play the likes of Summer Games, Winter Games and my all-time favourite California Games. The fast and frantic pace of multiple events made for fantastic fun with friends and it is that spirit that indie title Super Sportmatchen aims to capture.

Super Sportmatchen even goes for the 8-bit look with retro-styled sprites for characters and colours that look like they are straight off a 1980s gaming system. The music does not miss the beat either and it beeps and bops itself onto the screen.

So, the aesthetic is there but what about the common factor that made all those old titles enduring classics – fun competitive gameplay? Super Sportmatchen offers ten events that can be taken on in solo mode, against the CPU, or with up to 4 players. There is also the option to make 2v2 teams. Up to 5 events can be chosen for a Sportmatchen contest or all 10 can be played in a Super Sportmatchen competition. 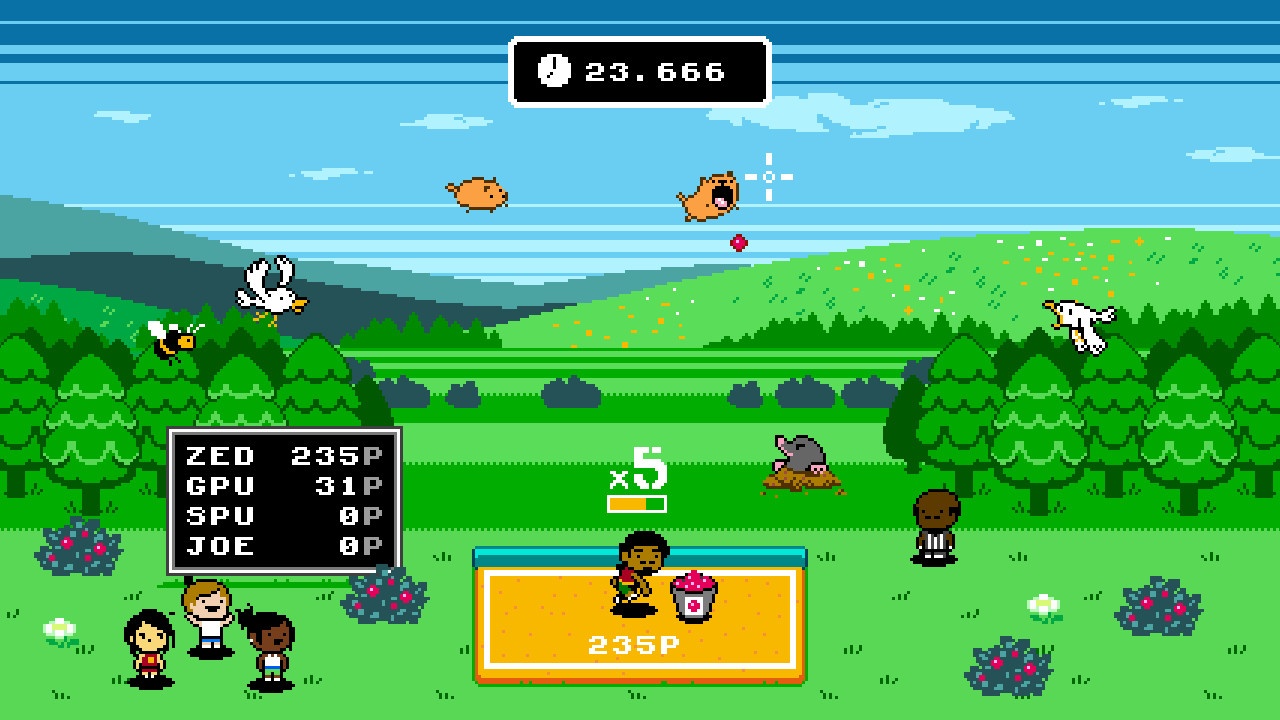 The events are as follows:

100 Metre Dash – the only ‘real’ event in the game. Button bashing is the name of the game, but you will need good timing to avoid tripping over your own feet.

River Dodge – A vertical scrolling kayaking course with obstacles. You travel at a fixed speed using the left and right controls to avoid the logs, whirlpools, and water creatures on the way. One hit and you are out!

Ball Toss – The aim here is to throw a ball as close to the wall as possible with scoring zones marked along the way. Wind, angle and throwing power all factor into the success of your throw.

Pillow Push – Fencing with pillows! You have to smack your opponent with your feather-filled weapon and push them out over the boundary. You also have the option to block in a simple but fun contest.

Wall Climb – A climbing wall simulation with aubergines! You make your way up the wall using the designated buttons to grab hand holds. Wind can affect your jumps and falling aubergines can knock you down. It’s a long way to the top!

Animal Feed – A clay pigeon shooting style game but instead of bullets and flying discs, you have food and hungry animals. As they fly overhead, you position the crosshairs and fire food into their gaping mouths.

250 Metre Plint Sprint – A variation on hurdles as you have to vault gym plints of varying heights. Mistime it and you’ll fall flat on your face.

180 Metre Hopp-Ball – A space hopper race! You need to time your jumps, avoid the sticky mud patches, and take advantage of the bouncy ramps to get ahead. There is also a one-off special move with which you can get an extra propulsion by bursting your ball – a dramatic way to win!

Capy Throw – A hammer-throw even but with furry animals instead of ball and chain. You grab them by the leash, spin them, and in a show of animal kindness deploy a parachute as they fall. Timing is crucial to ensure your furry friends go straight and now hopelessly out-of-bounds.

Hoops – A one-on-one basketball game with a couple of twists. First of all, it is perfectly legal to shove your opponent over to gain an advantage. Secondly, there is a vulture overseeing the game and dropping the ball back after each basket. 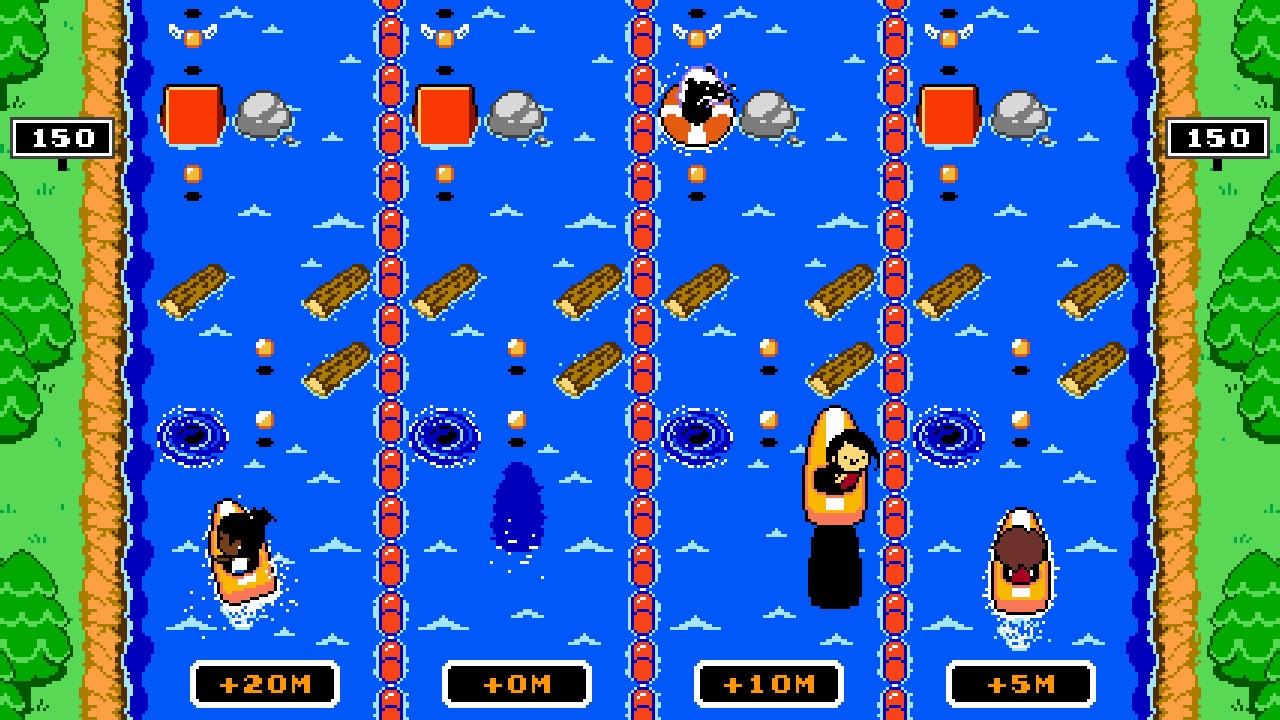 The events certainly offer a great deal of variety. There is also a huge variance in the level of challenge. Events like the 100 Metre Dash, Ball Toss, and Pillow Push are pretty easy to pick up and play. Wall Climb, Hopp Ball and Plint-Sprint take a little more getting used to but are straightforward enough once you have taken the time to get some practice in. The other events, however, are exercises in frustration. Even after some time getting used to the controls, it was impossible to beat the AI.

River Dodge is brutal as one bump and you are out. This is not helped by using analogue controls – two swift swipes left can all to easily be interpreted as one movement meaning you get wiped out. Using the arrow keys on the keyboard actually proved to be easier here. I thought I was getting good at Animal Feed until I tried a competition against computer-controlled opponents. I scored a paltry 50 points compared to the winners 300+. As for Capy Throw, I never got my cute animal to land inside the boundary once.

This issue can be negated by gathering some fellow humans around for multiplayer action. This levels the playing field between competitors much more. Take Hoops for example. After regularly getting obliterated by various AI opponents, I only started to enjoy the game when I tried it in multiplayer. I still lost the match, but it was a lot more even and a lot more fun.

While the games are more fun when played with others, there is still an issue with some events. River Dodge and Wall Climb, for example, often see a couple of competitors eliminated early and they have little to do other than sit and watch until everyone has finished. There are also games like Animal Feed where turns are taken. As each turn lasts a minute or so, that leaves your fellow players (and you when playing the AI) sitting around for a considerable chunk of time. 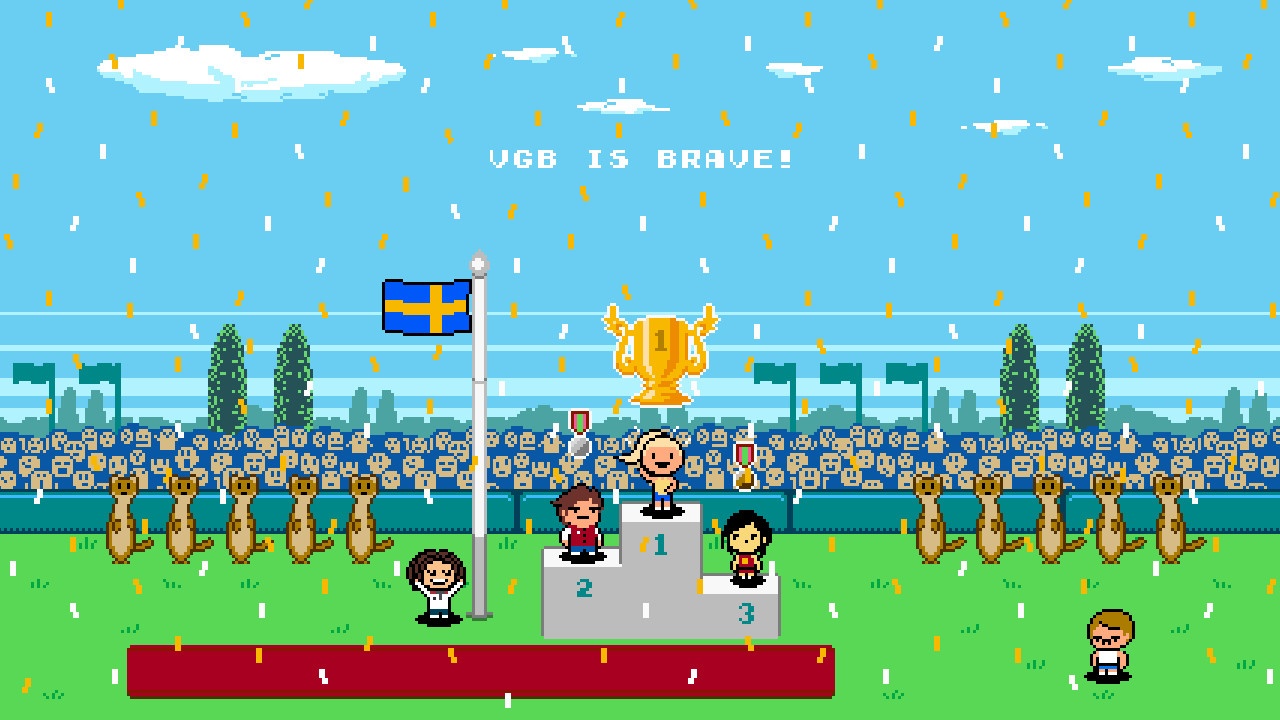 The best events are those with multiple players in action together. The sprint races use a scrolling track to keep everyone on the screen together even if one player shoots ahead or falls behind. It has to be said though that another source of frustration comes when you fall in the dash races as you lose so much momentum that it is impossible to get back into contention.

Ball Toss is fun to play and is perhaps the best example of a solo event where everyone is on the screen together. It is also an event that offers early success but requires finesse and timing to get the really high scores. That makes for much more competitive fun than events where in mistake sees you eliminated early on.

Super Sportmatchen is best played with others. As a party game for four, it can be great fun even if some players may get frustrated by their early eliminations in certain events. Against the AI, the level of fun is negated to an extent by the level of difficulty. Some events just aren’t enjoyable when you are struggling, and the AI is streaking ahead. Solo mode offers the chance for some practice, but the crazy high level of the AI means even when you think you have improved, you can still get soundly beaten. Get the game if you can guarantee a part of people to share the fun with but give it a miss as a single player experience.