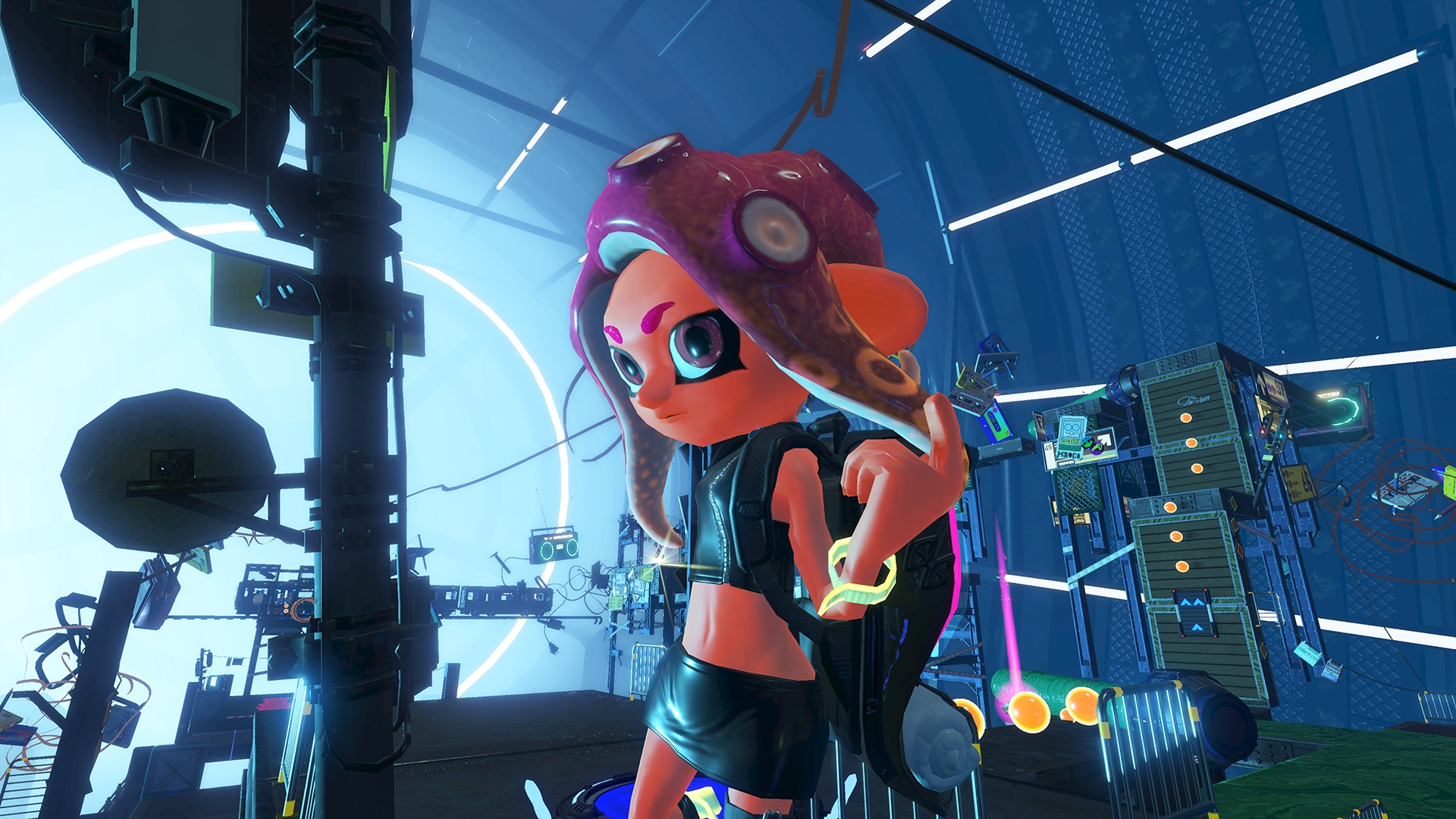 Nintendo has been making a lot of bold choices as it moves forward into this new generation of gaming. Some claim that Nintendo is taking the crown: the sheer gumption of the Switch, combined with novelty and wide developing pool, makes it the king of the castle. Others feel that Nintendo continues to lag behind, with an ugly online shop, ridiculously limited online support and features, and a lackluster E3 presentation. The latest addition to those choices has been the release of Splatoon 2’s first DLC, Octo Expansion. To their credit, Nintendo has done a ton for Splatoon 2 since it’s release, adding more and more in terms of balancing, stages and weapons over time. Last April’s 3.0 update was a huge overhaul, so no one can say that the game is abandoned with free content. My perfect score review was perhaps a bit premature when the game dropped over a year ago, but I definitely think it’s stepped up and earned it with time.

Octo Expansion puts you in the shoes of Agent 8, a mysterious figure who awakens in the lost underground metro system beneath Inkopolis. You are now in the shoes of an Octoling, the antagonist counterpoint to the main heroes of Splatoon 2 and the primary villains of the single player Hero Mode. Octo Expansion pairs you up with Captain Cuttlefish, who was conspicuously absent in the sequel (having been pretty important in the first Splatoon) as you work together to find your way out of the Metro and get to the Promised Land, which, as you might work out, is the surface world. In order to do this, you need to ride the rails and visit multiple stops to discover four Thangs which, when put together, will net you your freedom. In the process, you’ll also find out about a ton of lore around the Splatoon world, including why the Octolings and the Squid Kids are at war, and how one of the current DJs, Marina, is an Octoling AND NO ONE TALKS ABOUT IT. Beating the DLC also unlocks the ability to change races and be an Octoling in the main, multiplayer game, which has been a long-sought after goal for many. 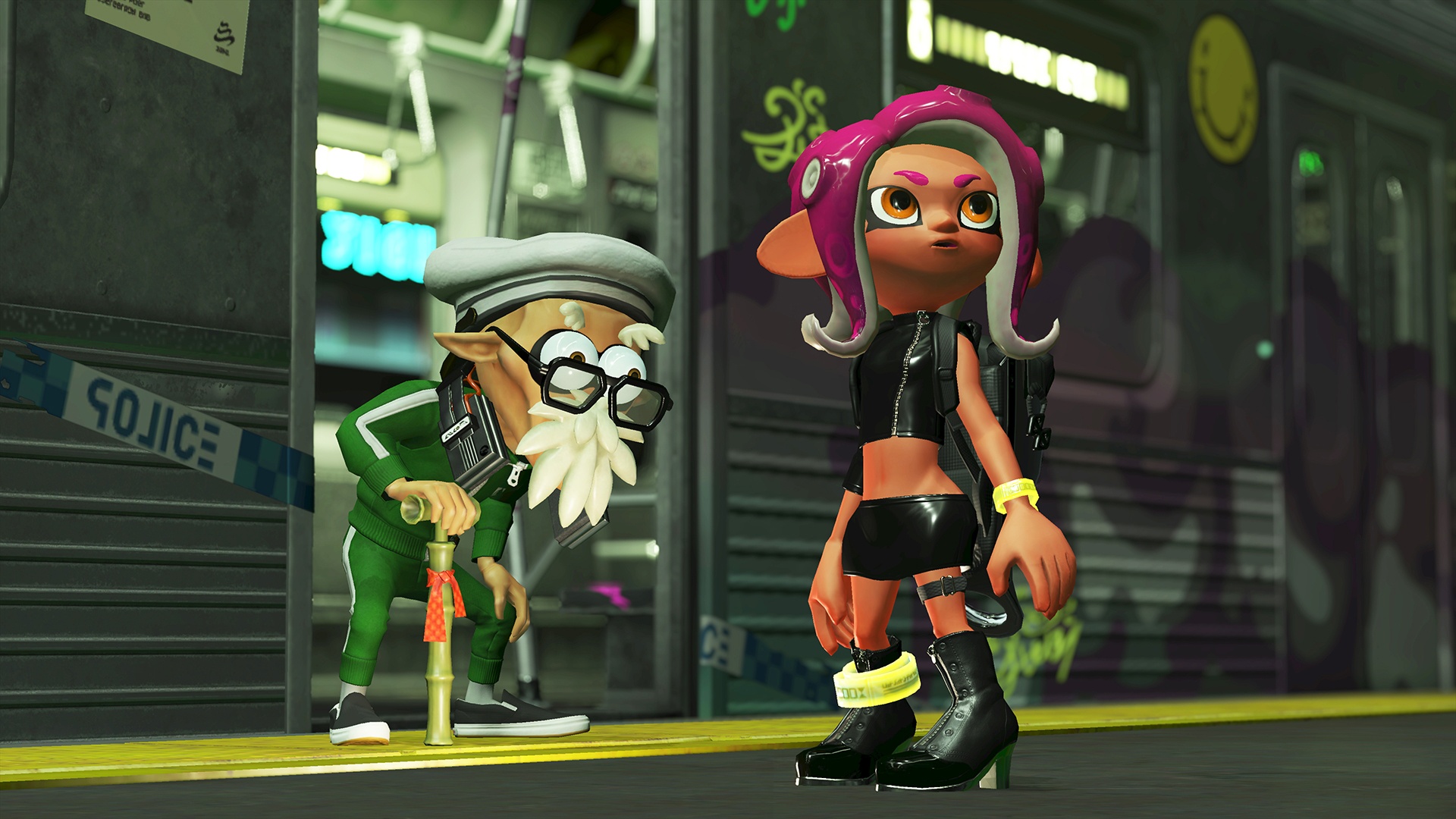 Getting things right out of the way, if you’re a dedicated and hardcore Splatoon 2 fan, you’ll be buying this DLC. The extra gear that you have the potential to unlock not only is fresh, but it’s exclusive, the best kind of fashion. Just from having the DLC installed you get some dope headphones, and you can unlock some truly funky pieces that scream “I DID THE WORK” to everyone who sees it. Additionally, all the history and interesting notes about the world of Splatoon are worth uncovering and seeing with your own two eyes. There’s been a great deal of exposition given to the original Squid Sisters, Callie and Mari, through some online comics and the main Hero Mode. The Octo Expansion gives you a chance to hear more about Pearl and Marina in off-air time, and it’s really engaging and almost heartwarming to see them have banter that isn’t canned or Splatfest related. Not to mention finally giving some closure to Captain Cuttlefish, because I sincerely couldn’t figure out what happened to him. Plus there’s this whole substory that I can’t get into without spoiling the whole thing, but the story actually gets DARK and insane.

Now, as for the gameplay itself, Octo Expansion has different missions at each stop along the different metro lines. Each mission has a different objective: get to the goal, destroy all enemies, stay alive, etc. You will, occasionally, have a choice of weapons before starting the mission, and your reward for beating the mission will fluctuate depending on your gun: the objectively “easier” weapon will pay out less. It costs a certain amount to play the mission, and you’ll have to pay again if you die too many times. The developers did decide on a mercy rule, however, and, if you fail twice, Marina can hack the computers and fool the system into thinking you passed. This generous system allows players to focus on the storyline if that’s all they’re really in for it, and it’s an unbeatable technique: the cost of failing twice and then hacking the system is generally just a bit more than the reward for passing. So, as long as you can play every third or fourth mission without the hack, you can breeze through the stops and get to the finale. And there will be people who want to do this, because, holy Jesus, these missions are hard.

It took me a while to figure out who Octo Expansion was designed for, and I finally figured it out: masochists. These missions cater specifically to folk who either have put in triple digits of time in the game OR love to fail to figure out how to succeed. The conditions can be tight as a drum sometimes, and totally unforgiving. There’s a few times where you have no weapons, no ink, and you need to survive being shot at for thirty seconds or longer. Frigging brutal. Several times, you need to push along a giant, unwieldy 8-ball towards the goal, and you fail if the ball falls off the ledge, which everyone and their mother is trying to force happen. Shooting targets on rails, only being able to use the hamster ball, time triggered mazes that have less than a millisecond of wiggle room…it’s brutal. I had to gently put down the controllers several times and walk away to go scream in the bathroom in frustration. I didn’t trust myself to play handheld because smashing a whole system is worse than a couple of JoyCons. I feel like recommending this to anyone is in the vein of telling someone to just try running with the bulls. You might not die but you certainly could. 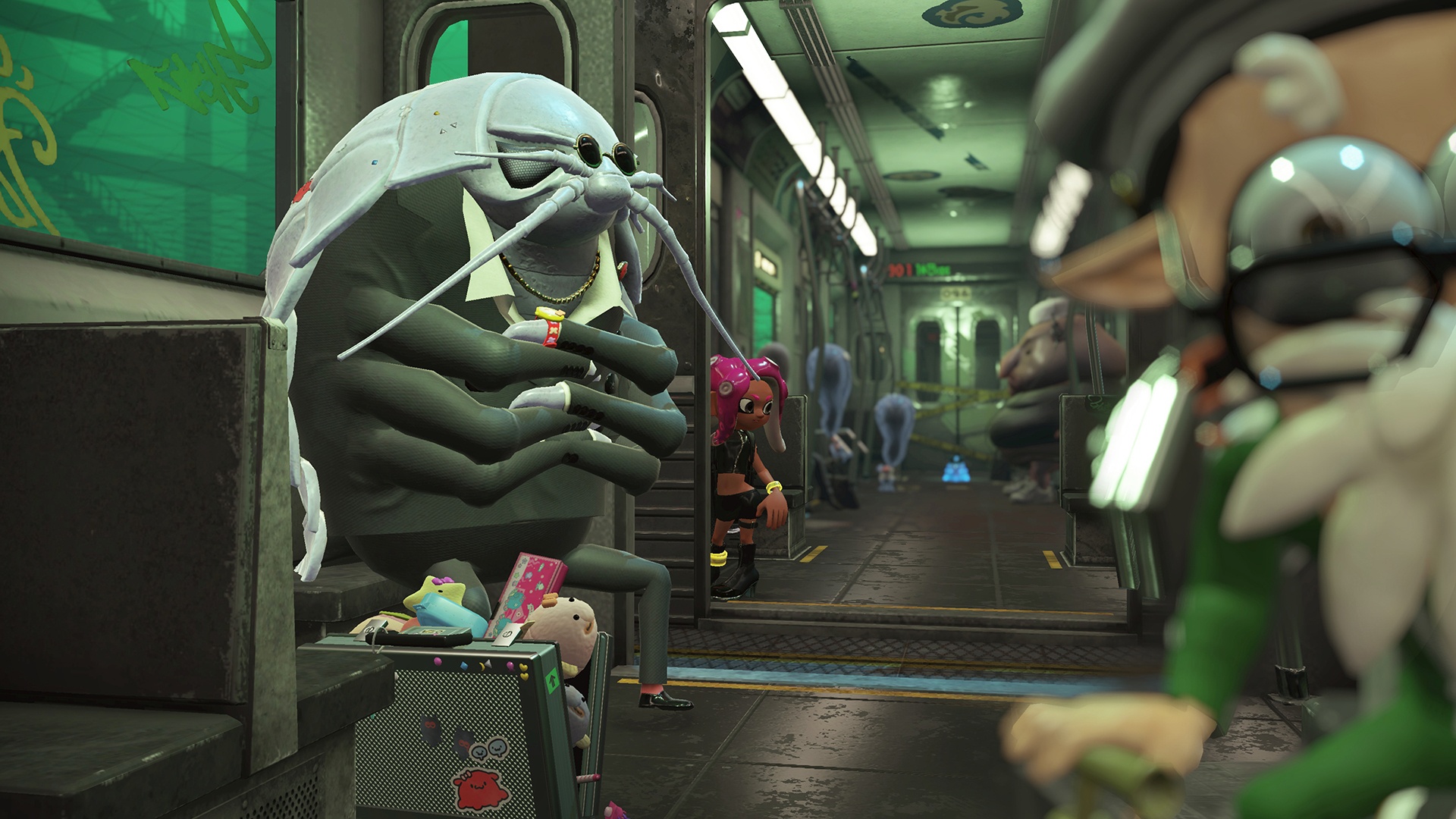 But you’ll want to play it through. You will. There’s a certain level of smugness that comes from being able to finish the particularly awful levels (Girl Power, anyone?) that other players will understand, that YOU will understand. You’ll unlock that fresh new gear regardless, so it’s completely an ego thing, but your ego will love you for it. You read and hear about Dark Souls and the difficulty curve of those games, and you wonder why people put in so much effort and time in a game that hates them. As a Splatoon 2 fan, I finally understand. You want that clean, beautiful subway map, free of faded memory markers. You want the little extra bonus for having a perfect score. You want to deal with the secrets and monstrosities and the unbelievable amounts of stress and anger because you challenge yourself. You got this DLC, no one else, and now you’re going to do it. Maybe you’ll get better at motion controls from this. You can bet your ass you’ll be better at ranked mode from this, because it’s like doing P90X for your accuracy and ink allocation. How many online matches have you had where the floor disintegrates because you missed a shot? Zero? Well, you’ll still be ready for it.

Properly scoring DLC like this is a hard one to slot because, well, you’re already invested if you’re buying it. You don’t pick up Octo Expansion without having played Splatoon 2 a bit, and it’s something that only affects the main game in a somewhat cosmetic way. But it’s incredibly challenging and enjoyable, and you get a decent amount of time and replay from it. The DeepSea Metro becomes an excellent place to farm cash for buying gear in the future, and, once you get those skills down, you can get some levels done in seconds. This is a fantastic departure from the main game that has benefits in practice, story and freshness, and is hampered only by the sheer level of difficulty that comes with it. Frankly, if you’re interested to get it, it’s worth the price, and might encourage even more spot-on DLC in the future.