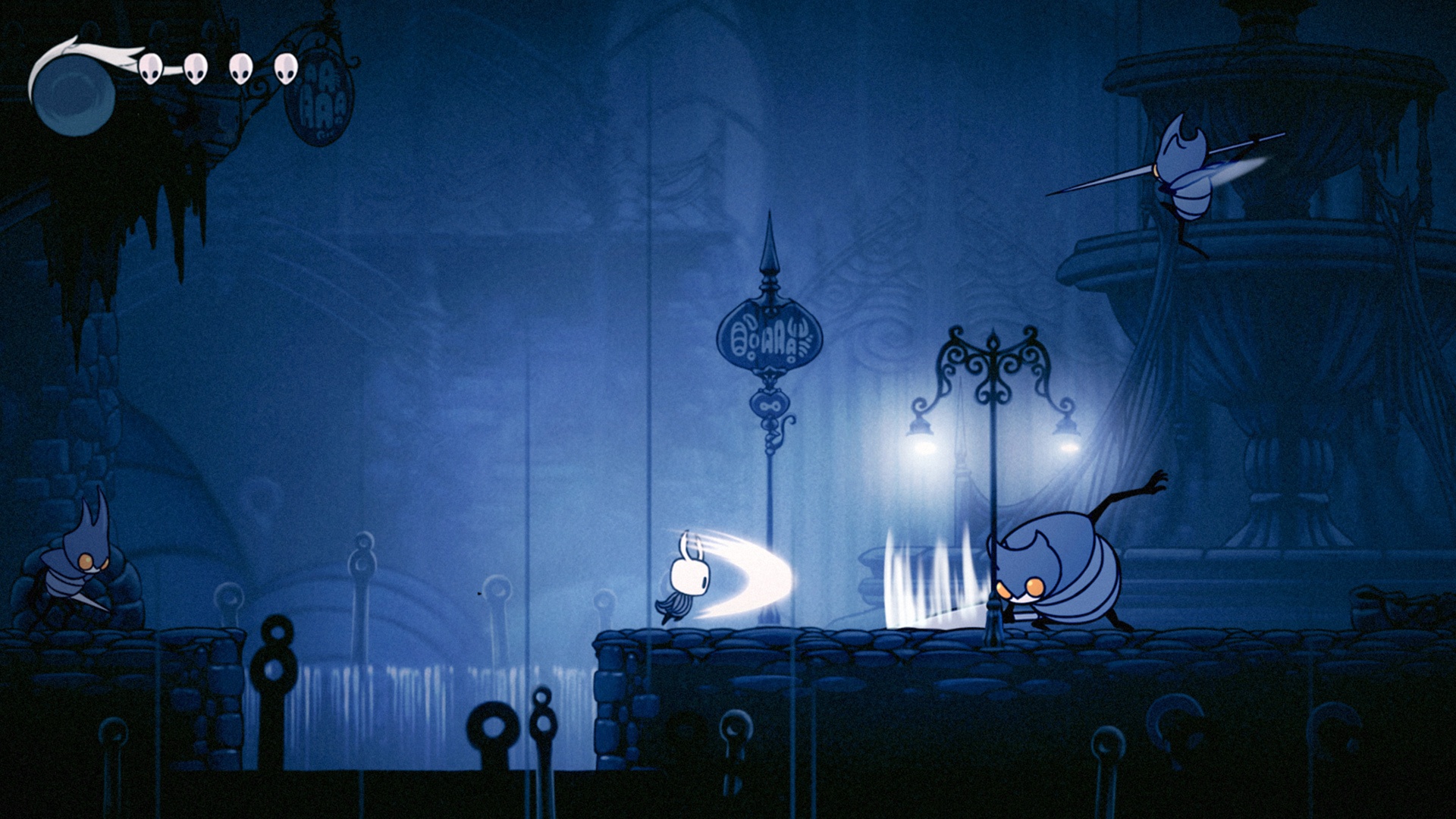 What truly makes a game fantastic isn’t the story that is told, but the storytelling itself. You’ll find that the greats in classic media – films and books included – have very little to do with what is said and, instead, how. Take, for example, Dog Day Afternoon. On paper, a man robs a bank to pay for surgery and things go south. This could be any number of cheap films that were cranked out in the 60s and 70s, but it stands out as a defining moment in the career of Al Pacino due to fantastic presentation and filmography. There might be a ton of wonderful tales out there that never get told simply because they get bogged down in either details or errant noise that degrades the whole thing. So please take it to heart when I say that the way Hollow Knight speaks to you – though story, gameplay and artistic direction – make it a modern masterpiece.

Hollow Knight’s plotline is purposely obfuscated for the sake of mystery, so I’ll do my best not to spoil anything, especially for all the newcomers who’ve waited with bated breath for this exclusive Switch console release. You are a nameless knight, who awakens near the city of Dirtmouth, which has been robbed of its inhabitants. The sole remaining citizen informs you that everyone else has ventured into the well, searching for wealth and wisdom from the lost kingdom of Hallownest. You decide to head down and try to help/rescue those who’ve gone searching, but, in the process, start to unravel an ancient and tragic story. This tale will lead you to the very heart of Hallownest, where you’ll learn more about the fallen empire, the madness of the bugs in the caverns, and just what is the titular Hollow Knight.

The metrovania genre is one that’s enjoyable but often difficult for a lot of people to get fully invested in. This is due to the very nature of the game, having to find paths you cannot breach, mentally remembering them, and then returning at a later date with a slew of additional items and power ups. It can be really frustrating to find what seems to be a clear way forward, but you lack something so implicitly simple – a double jump, or some kind of key – so you have to double back for minutes if not longer. Hollow Knight solves this problem with a threefold attack, and it works out rather brilliantly. 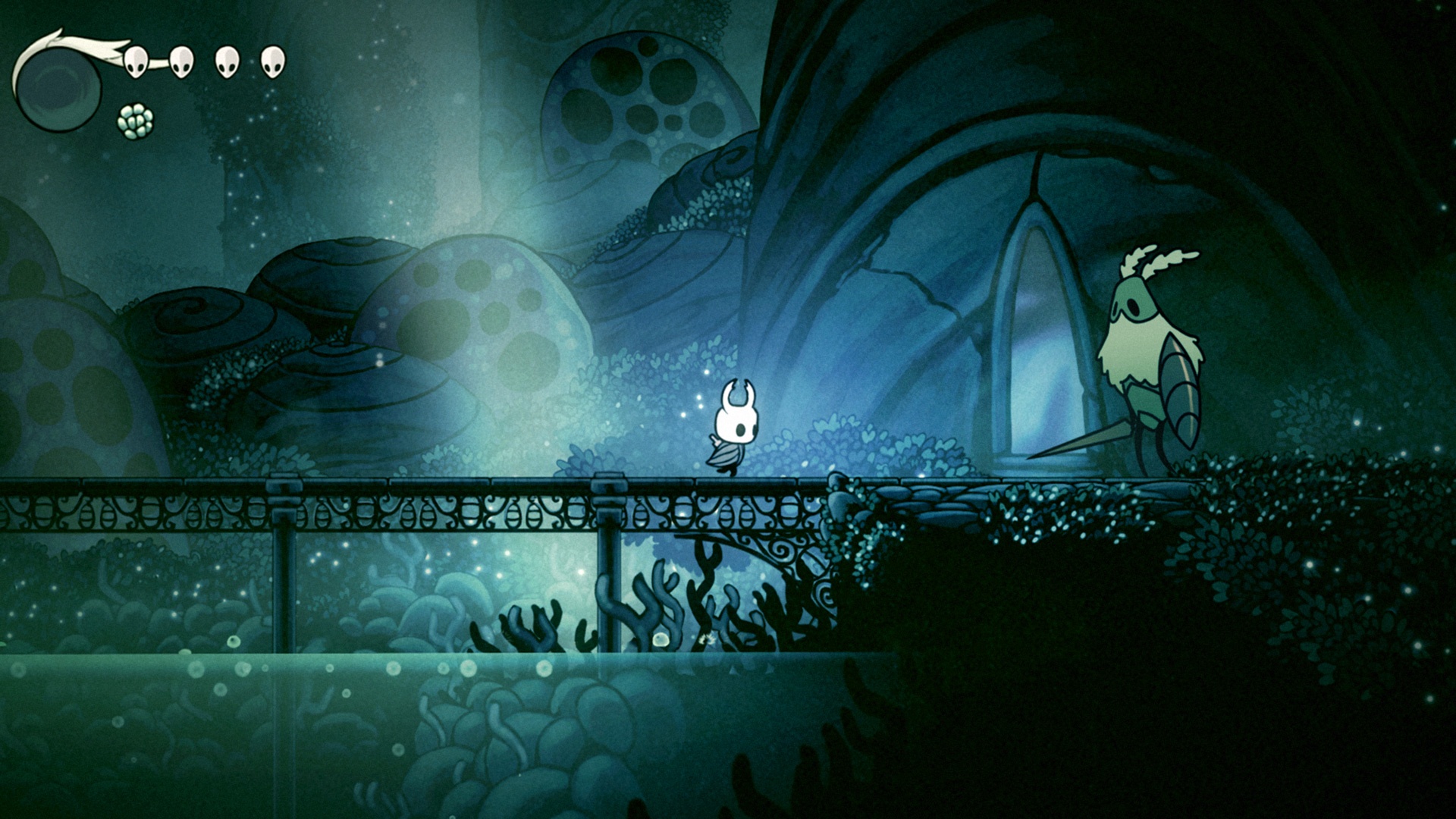 Firstly is the map, which you can find shortly after starting the game (if you go the correct way). The map is one that doesn’t autofill for you, but starts off pretty bare and gradually gets more flush with details and information. Interestingly, you aren’t able to even expand the map until you return to the surface with a certain amount of Geo (the currency dropped by monsters) and, even then, you’ll need even MORE Geo to get a “charm” that places your location on the map. But you don’t automatically update the map, either: when you find a bench (which acts as a checkpoint), you can sit down and draw out everything new you’ve seen. This adds a very personal touch to the game, something that makes you feel more vested in the quest. And, with some of the latest balancing updates (that came out with the Switch’s release), you can also buy a series of markers, some that automatically identify places on the maps (benches, shops, etc) but also some manual markers to put down where you’d like to visit in the future.

Secondly is the world itself. Team Cherry has done a magnificent job with their hand drawn animation to bring the concept of Hallownest and the world around it to life in soft, gothic detail. The time you spend exploring and finding greater and more sinister areas is worth the trek, as even the most well-worn traveler has the chance to find a hidden room or some kind of lost effigy that they may have missed the first time. I truly adore the way everything feels insect in essence but never gets too natural, too angular to make it grotesque. One of the first “bosses” that I discovered my daughter lovingly referred to as “anime Dumbo,” and the name stuck. It has a delight to it that doesn’t make it feel too childish, but, rather, activates that part of your brain fixated on wonder and mystery. You play this game to become lost in the atmosphere of it all, including the incredibly well done soundtrack, which was really evocative. It managed to stir a lot of imagery besides what we saw on the screen, and every abandoned tunnel and broken palace room came with an air of sadness, of history and memories long gone by.

Third and final is how the game builds and creates the legend of Hollow Knight. Yes, the entire storyline is paced out well through NPC exposition, signage with some history written upon it and a lot of player-found extrapolation of events though logical thinking. I know, it’s really vague, but it’s worth finding out yourself. No, I’m referring to how Hollow Knight as a game basically builds and builds to a point of absolute enthrallment. When you start off the game, you immediately realize that you’re tight as a drum as a character and a hero. Your jumps and strikes are spot on, even if you’re weak, and the earliest spell you have is one to refill your mask meter (hit points) and you can charge up your spells by whacking enemies. The potential is so apparent from the word go, but Hollow Knight doesn’t rush things. It gives you time to explore, find more things, gives you the Geo you need to buy charms and power ups as you delve deeper, and experiment with which charms you want to equip to make the best version of yourself. Do you want to play it safe and make a defensive, nimble knight? Or will you opt to overcharm and risk taking double damage by betting on your own skills? Are you so arrogant that you fight alone, or will you bring along…a companion? The game gives you the option, based on what you have and what you decide, and allows you to live with the consequences. 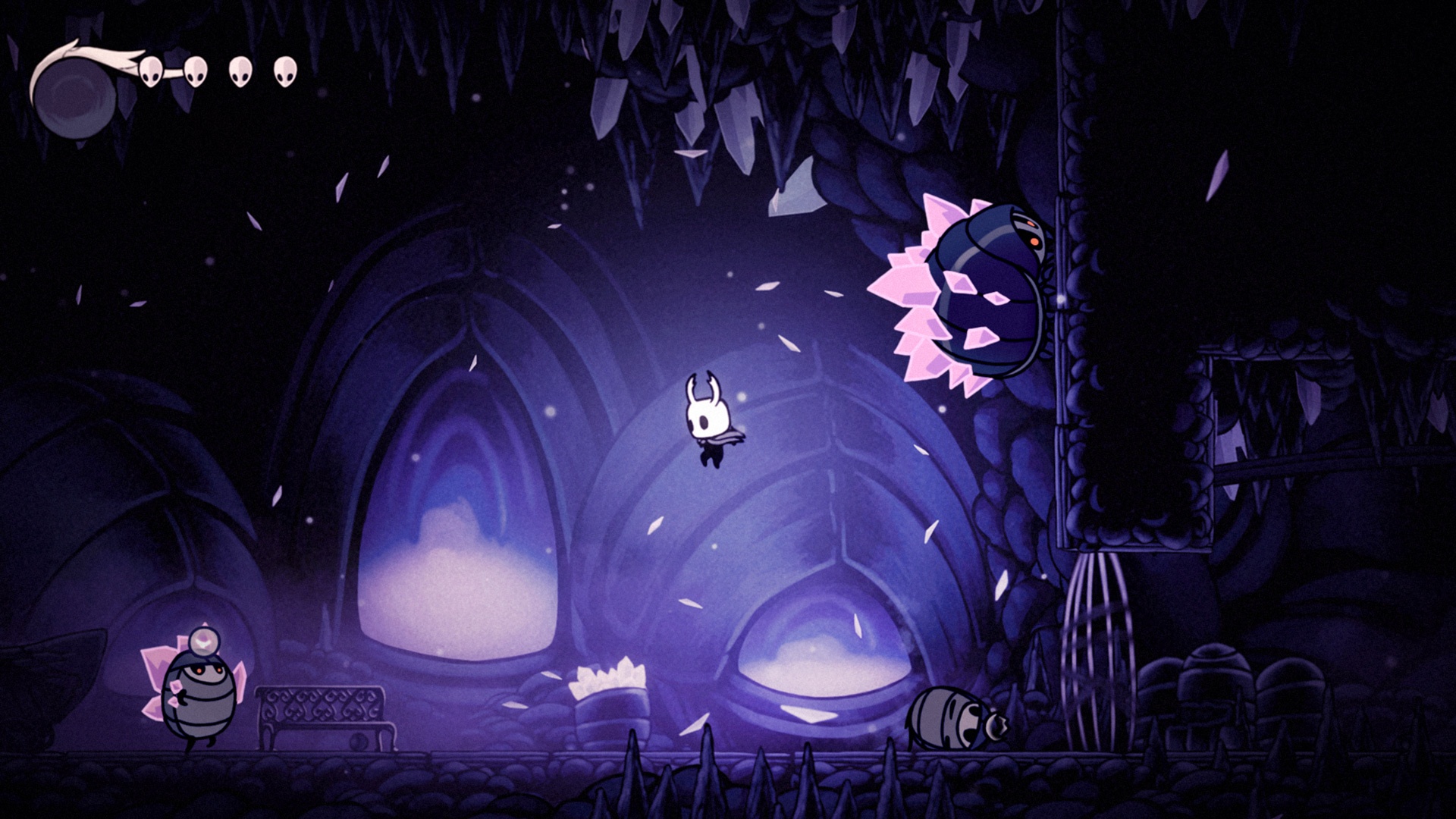 And, as your power builds, so does the difficulty and complexity. The first couple of bosses that you encounter are nothing compared to even your fourth or fifth encounter, and you’re forced to get better and learn your own limits as soon as possible. Dying isn’t a problem, but losing your life deep within Hallownest means needing to return to the depths hamstrung, eventually having to fight your own ghost at the site of your death to get back all your Geo and full Soul power. Learning bosses patterns and styles is something that can be done on the fly, but it’s still quite unpredictable: you won’t have to die automatically a la Dark Souls in order to figure things out, but you will get smacked around a bit. By the time you reach your first “final” boss, your character will be borderline unrecognizable from the character you started as. Your tiny knight has changed so much and evolved so far, you may even feel a bit proud that you’ve come up this way. And that’s the crux of it: this is you, you decided how the charms and such should fit to make the Knight the character you want him to be. This isn’t Samus Aran just grabbing everything she wants and changing on the fly, this is careful selection of customization based on knowing what happens and wanting to know what will happen. It’s really frigging involving.

Best of all, once you decide to finish the main storyline the first time, Hollow Knight has a massive amount of replay value. Besides the achievement system (called Quests) that hints at everything you’ve missed, there’s the addition of the Dream Nail, which invites you to go back and fight alternate versions of the bosses you’ve already conquered, and several Trials that challenge what you can really do. Team Cherry has also carefully detailed what all the DLC (which has been free) has added to the game since it’s PC release last year, so players can be excited that there may still be more to come that can be easily and succinctly integrated into the game.

I usually like to crow about the exclusivity of games on the Switch, but I don’t feel like doing that here for Hollow Knight. This game is one of the most captivating titles I’ve played, both in terms of how it looks, how it feels and what it has to say. There’s no strange angle or agenda, nothing that frustrates me in terms of performance or size, and, from start to finish, it kept me engaged and intrigued for what would be coming next. I can easily see this being a huge replayable title, both to test my own skills and do further exploring. I hope everyone gets a chance to play this, and I’m glad that it’s on the PC so, theoretically, those without Switches can still play it. For those of us with the handheld beast of Nintendo, however, this is one of the best presents we could get, and it was well worth the wait and the sudden reveal at E3. If you own a Switch, you owe it to yourself to play Hollow Knight. And, even if you don’t, you should consider exploring the legend that is the lost kingdom of Hallownest.