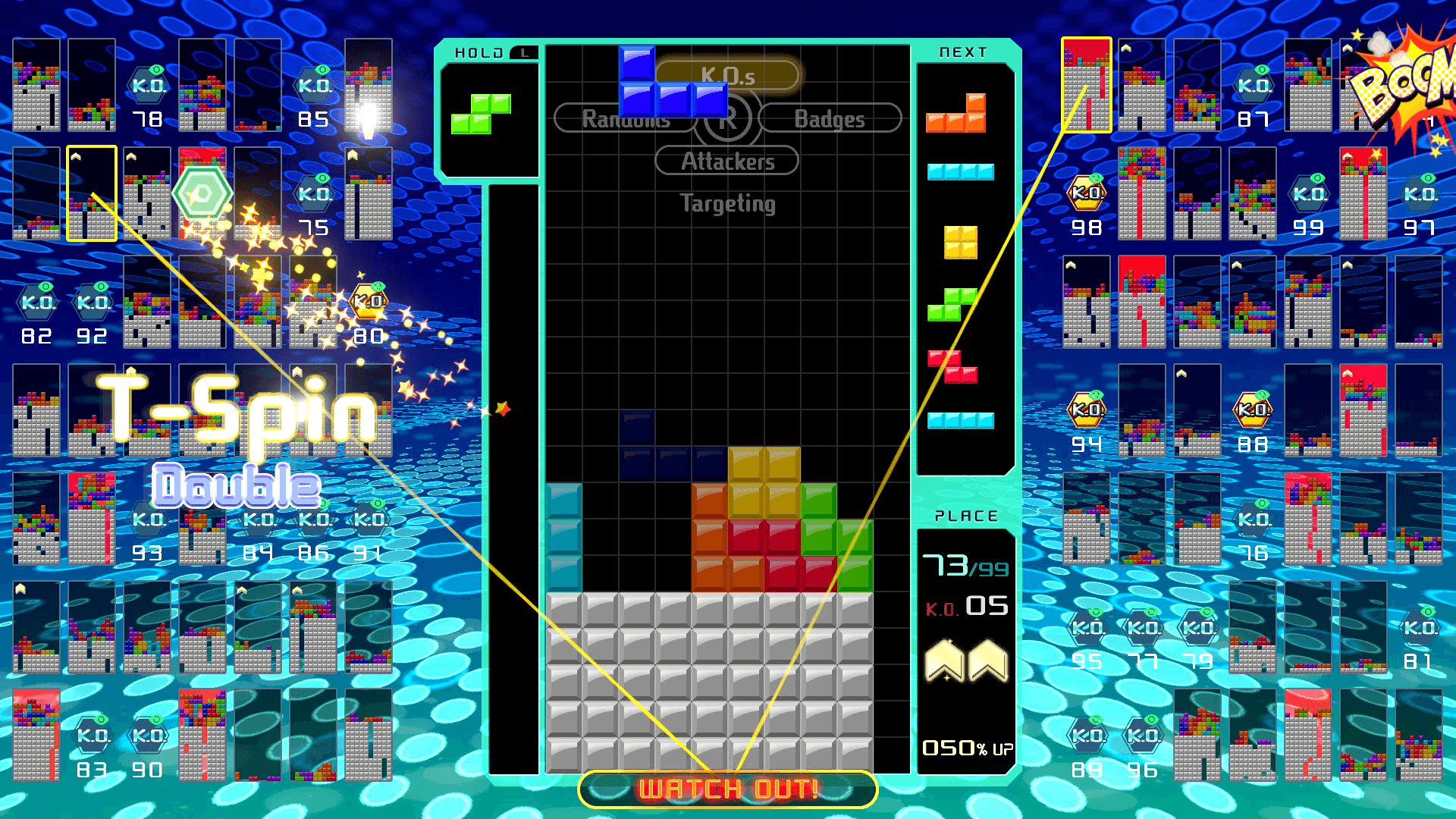 When Nintendo announced their online services a few months back, to say that people were disappointed is an understatement. Obviously the price is fantastic, and it’s just expected that consoles will charge you a bit on the side to support servers, but you also expect things in return. Most people were “happy but not thrilled” with the inclusion of a couple NES games a month, and that’s really been about it. Thankfully, Nintendo reached down deep, found EA had a license to a very, very well-known title, and said “Make us something worth living for.” The result is the completely unexpected, incredibly addicting title, Tetris 99, which is literally described as a “Tetris Battle Royale,” something that I figured monkeys would type in the process of smashing typewriters before someone said it seriously.

Reviewing Tetris is a lot like trying to review the concept of baseball or the idea of an apple. It’s something so ubiquitous to gaming that it defies and defines things even more than classic card and board games that’ve been ported to the Switch. If you don’t know, Tetris is this puzzle game wherein you need to line up a series of blocks (which are called tetrominoes, because that’s how big of a deal the game is) and then successfully making a line clears that line off the screen. You can clear up to four lines at once (an action called a Tetris) for maximum points. As you play, the blocks fall faster, and it gets harder, and you can theoretically win but God knows I never did it. Anyways, that game was made back in 1984, and so many incarnations of it have come since then that it would take a small book to detail them all. This game, Tetris 99, takes that barebones concept and adds exactly three things: penalty blocks (which is not new), reserve pieces (which is newer but not brand new) and fighting 98 other people in Tetris (which is new and terrifying). 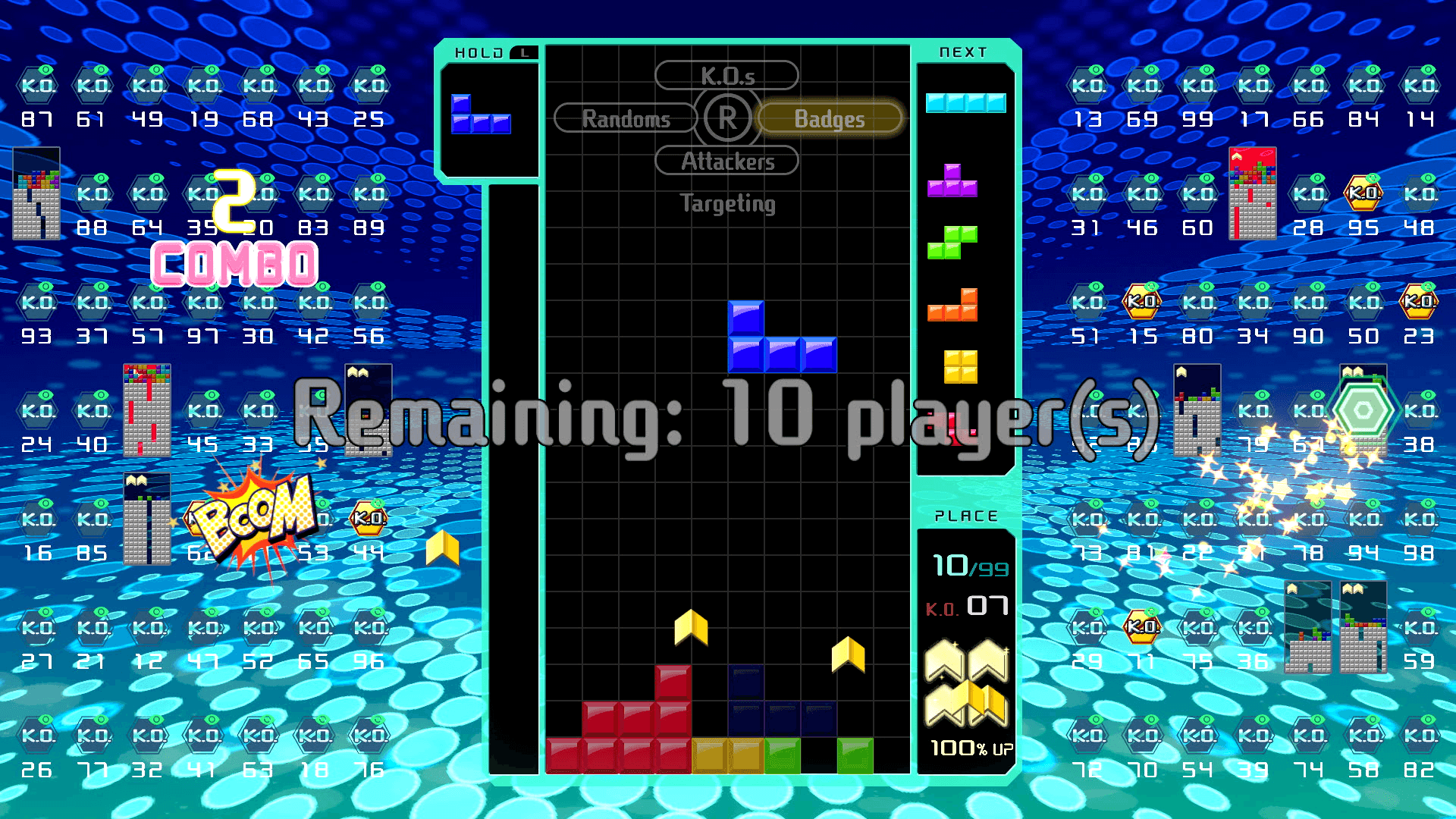 Basically the game is this: you’re playing Tetris. So are 98 other people. As you play, their victories will send extra blocks to your screen, and your clears send them blocks in turn. You can let the computer randomly assign who gets the grunt of your displeasure, or you can actually target people, which means everytime I lose I assume it’s at least slightly personal. They can’t see your name, but they can see a thumbnail representation of your screen and can decide to either attack someone who’s doing really well or on the precipice of death. You can choose one piece to hold in reserve if you like to wait for the perfect moment, and you can swap it with another piece at any time, but you can’t swap back. Meaning you need to time it perfectly and not accidentally get your buttons confused like I do and accidentally bring in that 4 block long piece when you sincerely didn’t need it. The game will gradually get faster à la classic Tetris, there are announcements at 50 players left and 10 players left, and I want so badly to win that I’ve stopped several times just during these first three paragraphs to pick up and play some matches.

There’s a ton of success to Tetris 99 right out the gate. Firstly, they really trimmed the bells and whistles off the game, leaving just the core values that everyone and their mother (literally my mother, who played this game obsessively when I was a child) can navigate and understand. The game is currently gaining some serious speed, so long time Tetris players are gradually losing their edge, but people who were religious about using their monochrome Gameboys back in the day still might be able to pull one over on folks who are taking the game at face value. I’ve seen things like the addition of bombs, 3D spheres, shape distortion and every other thing that could be thrown at Tetris, and I’m just so glad that we boiled it back down to what truly matters. They even boiled out additional soundtrack songs, instead leaving an updated, remixed and well done version of Korobeiniki which is a tad disappointing. Don’t get me wrong, I love the classic Tetris theme as much as I love Hungry Like the Wolf: both are classics and should be admired for what they represent. However, just like I secretly like Rio better, I always preferred to have that other track playing when I was Tetrising. Not the weird variant on Bach, but the original one from Hirokazu Tanaka. That thing was my jam, and made block dropping my absolute favorite. 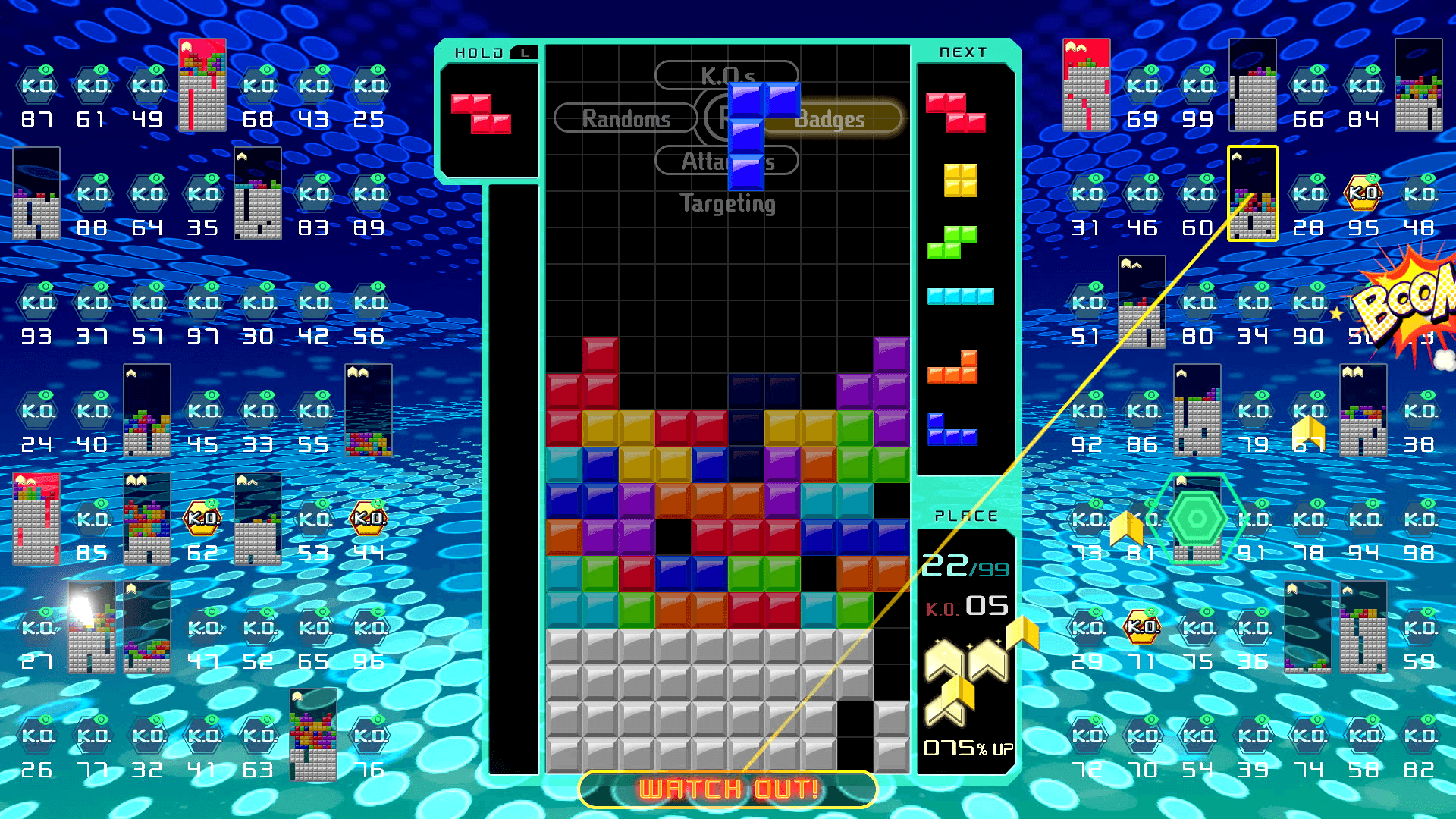 Additionally, at the time of this writing, I’ve had zero problems finding enough people to match with nearly instantly. I’ve tried playing at all hours of the day, weekdays and weekends, and matched up in well under a minute. My internet is also not a problem, as the relay of the information regarding attacking blocks and when the playerbase is getting limited felt instantaneous. Though the term Battle Royale feels oddly out of place here (there was no moment of dancing because I pulled off a Tetris), watching the chaos unfold as all these players dive in and start their game is brilliantly exciting. This is one of those titles that, as much fun as it is to play, being an observer is also fascinating. As long as you don’t get knocked out in the first 20 or so, you almost feel compelled to see how the match is going to end, and how long it’ll take. There are ebbs and flows in terms of gameplay, where it feels like it takes forever to get down to the final fifty, but then the next thirty seem to disappear in the blink of an eye. No matter your skill level, I have yet to see a full match of Tetris 99 go for longer than 7 minutes or so. See, mind you, from the observation deck: I’m always out before we get to single digits.

The game is going to continue to evolve in terms of player base and available members, and that’s the only real caveat of Tetris 99 moving forward, though it could be a sizeable one. You see, the game is essentially free: you can pay a separate membership if you don’t have Nintendo Online set up, but why in hell would you? I’m extremely hard pressed to imagine someone getting a Switch strictly for playing Tetris online. Anyways, you keep playing, you keep leveling up, and…that’s really it. There are local stats as to how your playing is going, but there’s no option to play the game offline solo to improve your skill. Already we’re starting to see people working together in strange ways, as I got targeted by four people at the start of one game to be the recipient of their penalty blocks. I was knocked out at 64, which was kind of infuriating: after all, there are other players, why not focus on them? Still, that’s the mentality of the world’s fault, not the game, and it seemed like an isolated incident. Hell, could have been a coincidence. But I can’t pretend that some people won’t communicate outside of Tetris to coordinate attacks and get their own group into the finale, especially with a paid tournament currently ongoing.

At the very core of it all, it’s Tetris. Tetris 99 can’t be played on the go without a portable modem, and you won’t have any sort of dynamic storyline to keep you moving, but it is damn fun, and pretty exciting, and a fantastic addition to the Nintendo Online Services. I wholly encourage Nintendo to keep going down this pathway and adding more fun perks to keep people invested. Because when the crafting gets boring, or the end boss gets too challenging, or I simply want to throat punch Tom Nook over bells, I can put it all away and go get my blocks off in Tetris. And that’s an invaluable addition to have on your Switch.

The free game that came with the purchase of a Gameboy is now the hottest online showndown, and I’m totally okay with that.