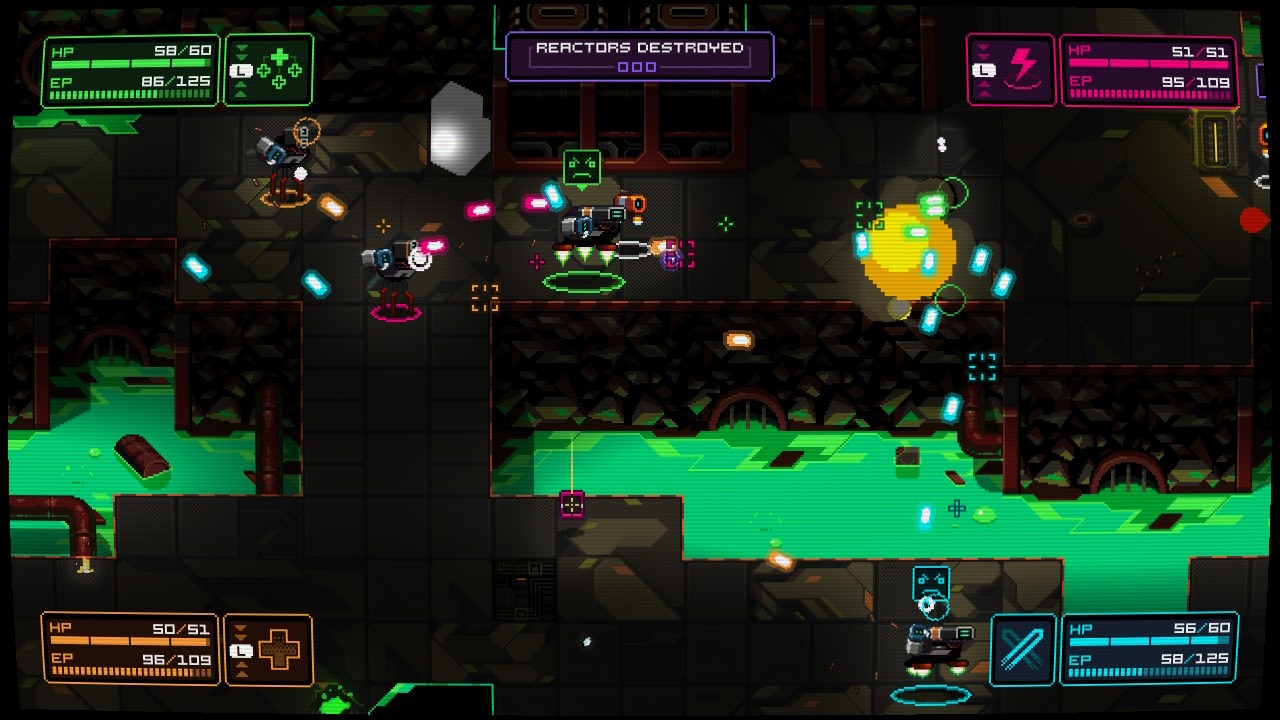 “Steredenn + NeuroVoider + Transcripted = Explosions! Kaboom!!” The tagline when looking at Indie Gems Bundle – Explosions Edition on the Nintendo E-Shop. A collection of three indie games, this collection is the first in a series of collections released by Publisher Plug In Digital. The premise is based on a single idea, in this case explosions, games are gathered up that meet these criteria and released together, which ends up being cheaper than buying all three of them separately. The review will be split into three separate sections that overview each of the games.

First in the collection is Transcripted, which offers the most unique style of gameplay. It combines the twin-stick shooter genre with a match 3 puzzle gameplay. After a lengthy tutorial with a lot of information thrown at the player at once, the game really kicks off. The unlikely combination really melds well together. The player is progressively thrown into more difficult puzzle situations where you need to match 3 DNA-like blocks to progress, all the while playing a bullet hell shoot ’em up. While the game never seemed too difficult, it offers just the right amount to keep the player engaged. Music is very ambient and does not offer too much in variety. If the story is too much talk and you just want to jump into the action, then you are in luck. There are a series of challenges that will drop you into the fray while trying to beat the challenge as fast as possible.

Graphically, this game looks the worst out of all three games in the collections. Playing in handheld mode made it feel like I was playing a game on the Nintendo DS graphics wise. Which to say isn’t terrible, it just fell below expectations. The DNA blocks do offer a bit of bright, neon colours that offsets the rest of the dull colour palette. Overall, this game feels the weakest of the three in terms of the theme of explosions, this one feels a bit of a dud. Don’t get me wrong, the game is fun and the puzzles challenging, it’s just the game does not fit well with the other two games in the series. This rates at 6/10. 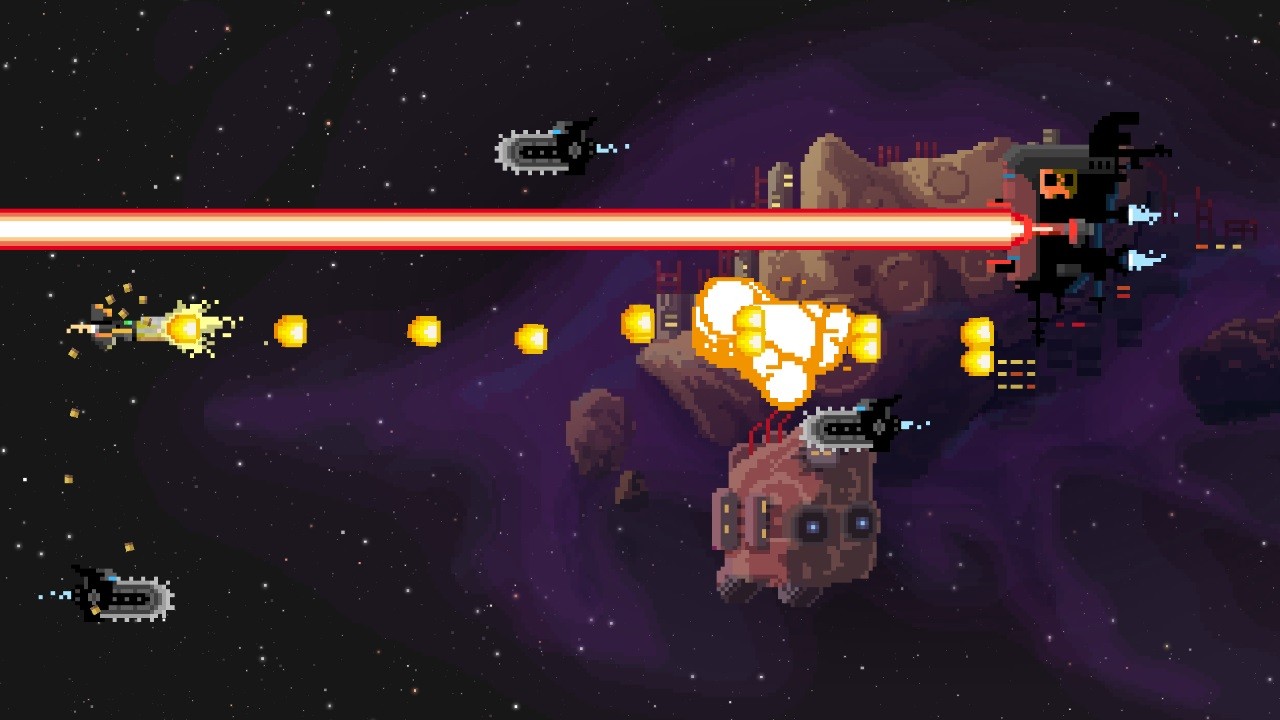 The second game in the collection is NeuroVoider. This game is a twin-stick rogue shooter where you and three friends can play couch Co-op. You pick a robot with different specialities, two basic attacks, one special attack, and one support ability and go through a randomly generated dungeon to wipe out the enemy forces. You clear the floor by destroying the enemy nexus, which will allow you and your party to teleport to the next dungeon. The standout feature is in between the levels, you and the squad can customize your robots with parts you acquired on the previous level. You can spend bits you found on upgrades like health as well. After everyone is done, you can then pick one of three paths to the next level. The bigger the level with more challenging enemy units, the more loot you can acquire to upgrade your robots, all paths will culminate to a not-so-surprise plot twist. The gameplay is solid and with three difficulty levels. Any level of gamer should have a great time. Once again the music is very ambient in this game, but the dystopian setting really matches it. It sets a very sombre tone that pairs really well with the gameplay.

Graphically the game has a dystopian art style. It incorporates a very dull palette of dark reds, greens, browns. It creates a very dreary, post-apocalyptic mood. Overall, this title satisfies the explosions and fits very well in here, plus multiplayer is always a plus. This rates at 8/10.

The last game in the collection is Steredenn: Binary Stars. This title is by far my favourite of the all three games in this collection. This is a classic bullet hell shmup very reminiscent of Gradius of days of old. You are given a brief tutorial and just thrown into the action. Let me start this by saying, YOU WILL DIE A LOT. This is not an exaggeration. This is not a difficult game, it is just overwhelming with enemies, you will need to learn the different attack patterns from the enemies and bosses if you hope to progress through this randomized galaxy to get revenge on the space pirate fleet that attacked your Mothership! You have to be quick with your thumbs in order to survive. Due to the randomizer, you will not always fight the same boss every time you start over, so it is imperative you remember what each boss’ attack pattern is. Think along the lines of Bind of Isaac with the random boss encounter. There are 5 ships to find that each has a different special ability that will help you on your quest for revenge. You can also have two separate basic attacks that you can find from defeating enemies. 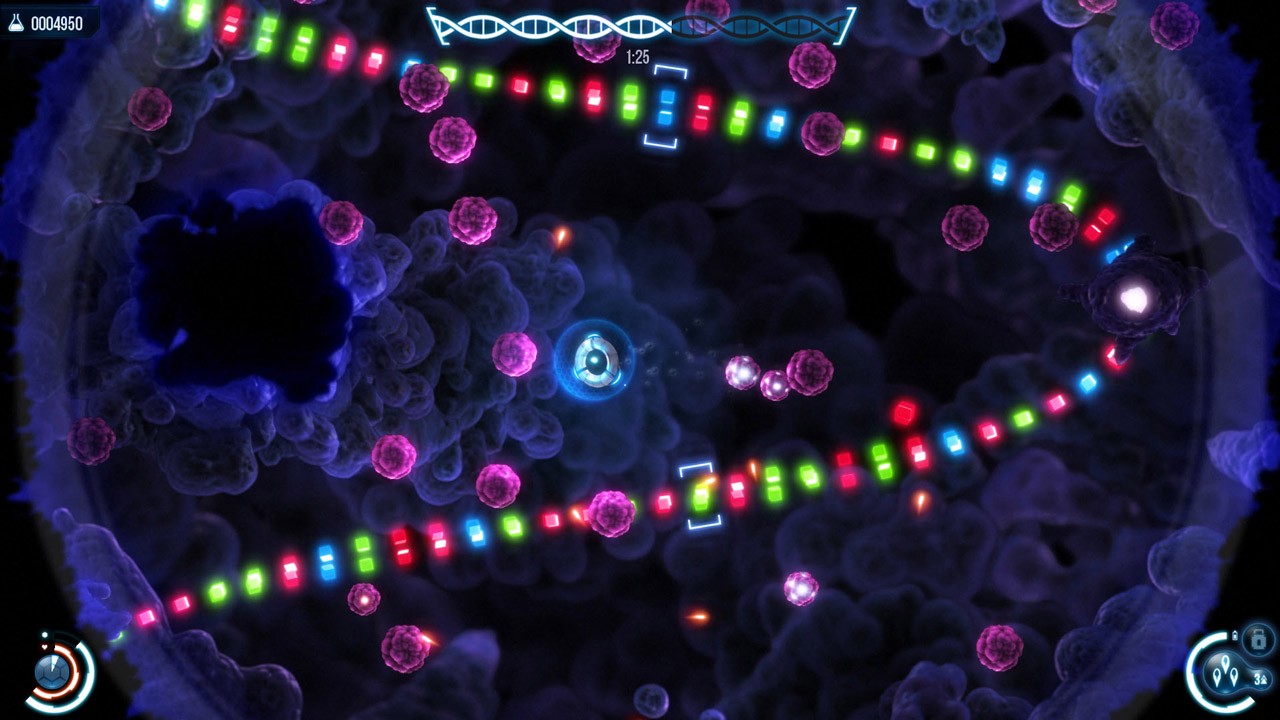 Graphically, the game uses large 16 bit pixels which makes the game look as indie as possible that lends to the gameplay. It is colourful and definitely lends to the explosion factor that got it into this bundle. The music is heavily inspired rock music. You can even play the game with another friend and share the fun. Overall, this game is fantastic and something that I see myself personally playing time and time again until I beat it completely. This rates at 9/10.

Overall, for the price, you do get your value. All three games do offer a unique experience that helps set them apart. Though some are not as strong as others, all three are good gaming experiences that any lover of the twin stick shooter genre would be mad not to have. My only main gripe is the UI for this collection. You are booted to a screen with all three games on display, you pick which one you want and then loaded into it. The problem this creates is that if you want to switch to a different game in the collection, you have actually quit out of the entire game and relaunch it, which got pretty annoying early on when playing for this review.

Overall the entire collection rates a 8/10. These games bring a different flavour to the table, whether it’s the genre mixing of TRANSCRIPTED, a different twist to the rogue-like dungeon crawler of NEUROVOIDER, or just the straight-up reminiscences of Steredenn: Binary Stars you will not be disappointed.

Overall, for the price, you do get your value. All three games do offer a unique experience that helps set them apart. Though some are not as strong as others, all three are good gaming experiences that any lover of the twin stick shooter genre would be mad not to have.