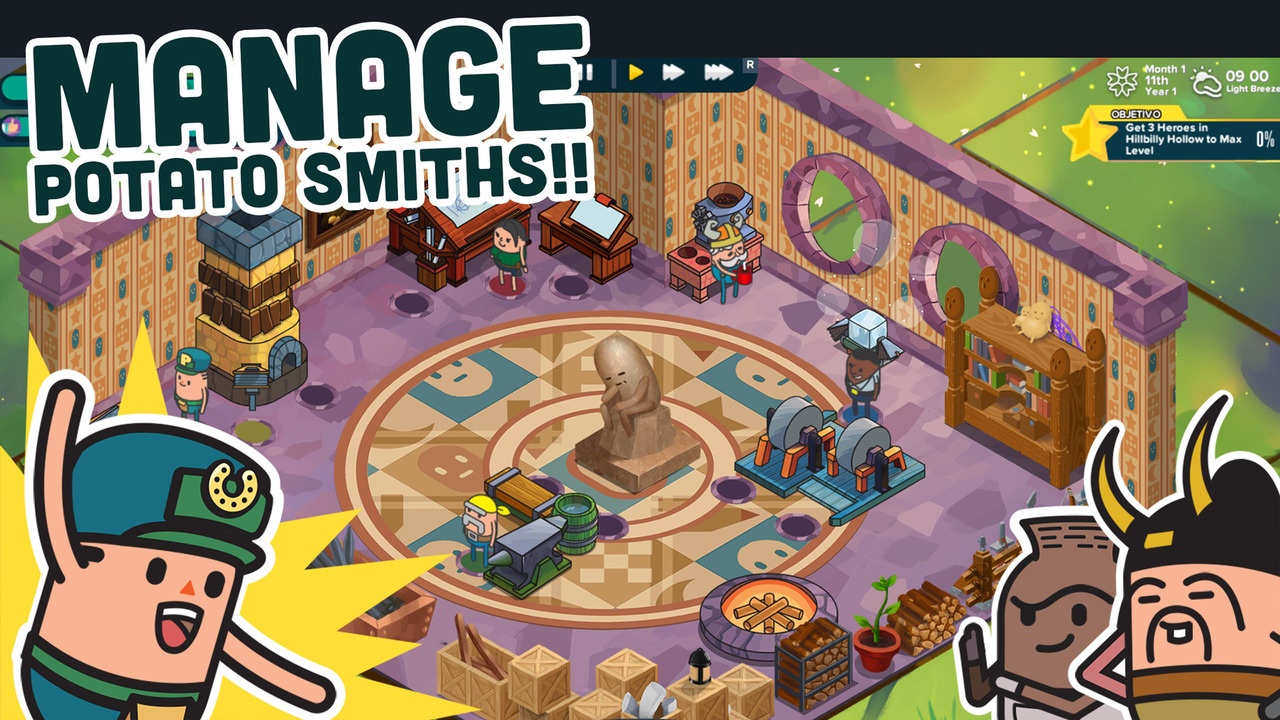 Simulation games are a tricky sort to both get into and to grade. There are different degrees to all of them, especially when you mix management elements into the game. Sometimes, you get something that’s crazy elitist and will only grab the attention of players who also have done the previous eight games in the series. This isn’t meant to alienate people, but, rather, to keep a loyal fanbase happy. Sometimes you get games that are just too overly simplistic for fear of scaring off newcomers. This is great for the folk who want to give the genre a try, but it’s guaranteed to frustrate and drive away longtime players. So what’s the secret, then? Try something new, have it start small, and scale it to garishly huge proportions. Don’t start with boiling water: put the frog in cool water and gradually heat it up till you have soup.

Holy Potatoes! A Weapon Shop?! is the first in a series of Holy Potatoes games made by Daylight Studios, and, some would argue, the best to date. In this game, you play a young potato whose grandfather was a famous weaponsmith. Now that grandpa is dead, you inherit 1% of his estate, which is a modest forge/smithery. Your grandfather’s old partner, who is DEFINITELY up to something, wants you to get back into the family business for reasons that are certainly not nefarious. As you are a young and naive spud, you’ll recruit the best of the best (that you can afford) to train you in the arts of weaponsmaking, get your footing in the market and expand to make a weapons empire. Oh, and there’s a dog that comes along, and he’s pretty important, but you don’t make him into a weapon. And, if you didn’t pick up on it yet, since you’re a potato and everyone’s a potato, things get pretty silly.

The initial flow of Holy Potatoes! A Weapon Shop?! (which I think I’ll shorten from here on in) is pretty standard once you understand things. You decide what you’re going to forge, and then get to work with your workshop of people, with each person’s expertise adding a little something to the weapon (speed, accuracy and strength). When it’s all done, you get to bring it into market and shop it around to aspiring heroes and not-so-heroes. If they buy it, they’ll take it out on their adventures and then give it a rating when everything’s said and done. The rating affects your shop’s reputation, and the higher reputation means more customers and more workers. You eventually need to go into town to buy more supplies to make weapons with, and you can uncover new “recipes” for additional weapon types (though you’ll spend most of your time making katanas because everyone wants a damn katana). Occasionally, you’ll send one of your smiths ahead to explore and forage in different lands and worlds, hopefully finding supplies, ancient weapons for repair and lost relics that clue you in to new and different and wonderfully deadly things to make. 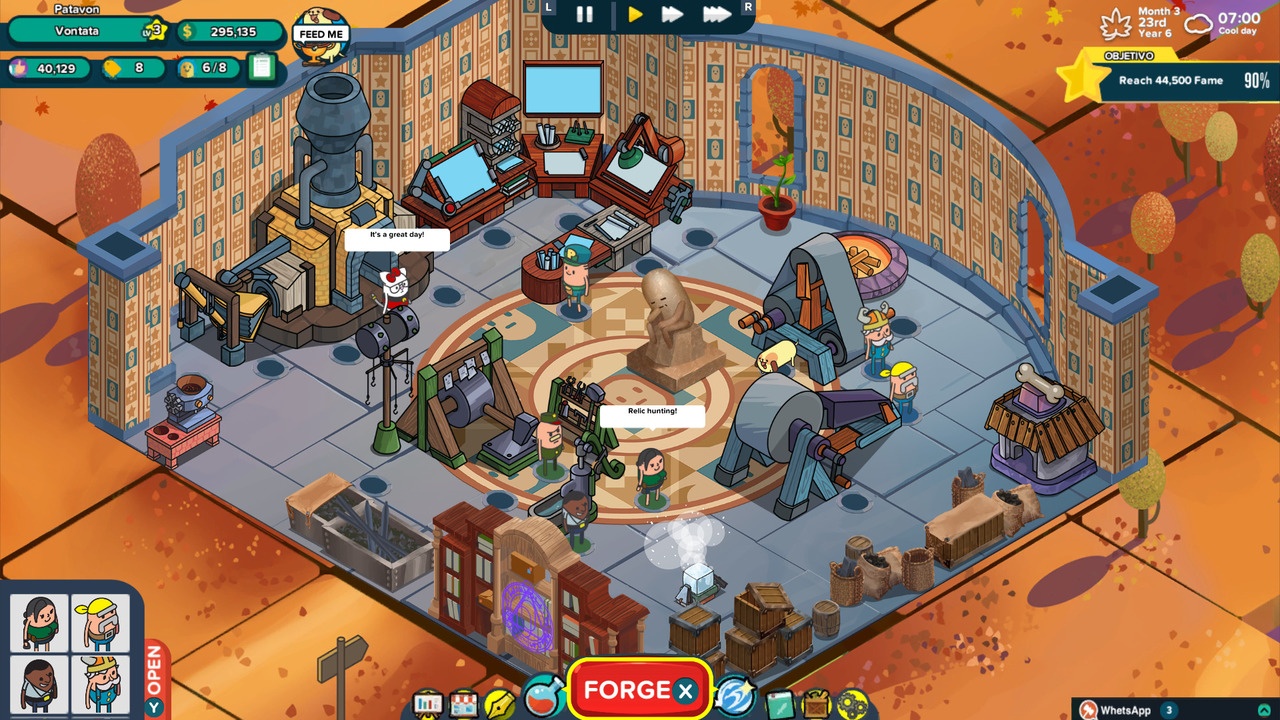 Technically speaking, Holy Potatoes doesn’t do anything game changing in the vein of the genre itself. You’re held to a good standard of time management without it getting positively chaotic and intense. While customers can get very upset with poorly made weapons (random events of the world will affect the quality, as well as your in-house and freelance smiths), there was never a point that felt end of the world to me. You get into a good groove with things, and you start to almost mechanically get the rhythm. Plan, make, boost, sell, improve, advance. One worker gets overwhelmed, send them on vacation to help them relax and boost their return. Someone comes in for a quest, the quest leads us to where we need to go next in progression. It’s satisfying, at the core, to have everything flow along in a way that feels natural and manageable. Some people really like to be overwhelmed from the very beginning. That is not me, and that is not this game.

What Holy Potatoes does incredibly well, however, is progression. Everything seems perfectly organic with the flow and upgrades that come into your shop. Of course I need three people working the anvil now, I want to make a weapon with even better speed! Naturally we should expand the workshop, how else can I get three different weapons going at the same time? Yes, we need to start doing magic in the workshop, enchanted weapons are the freaking best! Without even acknowledging it, you go from a mom-and-pop style corner smithy to this monstrous, sprawling shop that devours your screen and requires a ton of on point care for everyone inside, including the dog, who’s been steadily eating everything you put in his dish and is NOT HAPPY when that dish is empty.

Sadly, the later stages of Holy Potatoes aren’t as much fun to do with the JoyCons as you might think. Sure, it’s certainly doable, and it’s not a problem with smaller areas, but the big forges take a bit to navigate with buttons only, and the floating cursor isn’t as precise as I’d like it to be. For these times, I have no problem dropping into touchscreen mode in order to navigate things in a more orderly and direct manner. I’m not trying to dismiss the button controls, far from it: I think Rising Star, who did the porting, did a pretty great job of mapping a very mouse-driven game to joystick. I just think the touchscreen is going to be preferable to people who are intense with their playstyle. 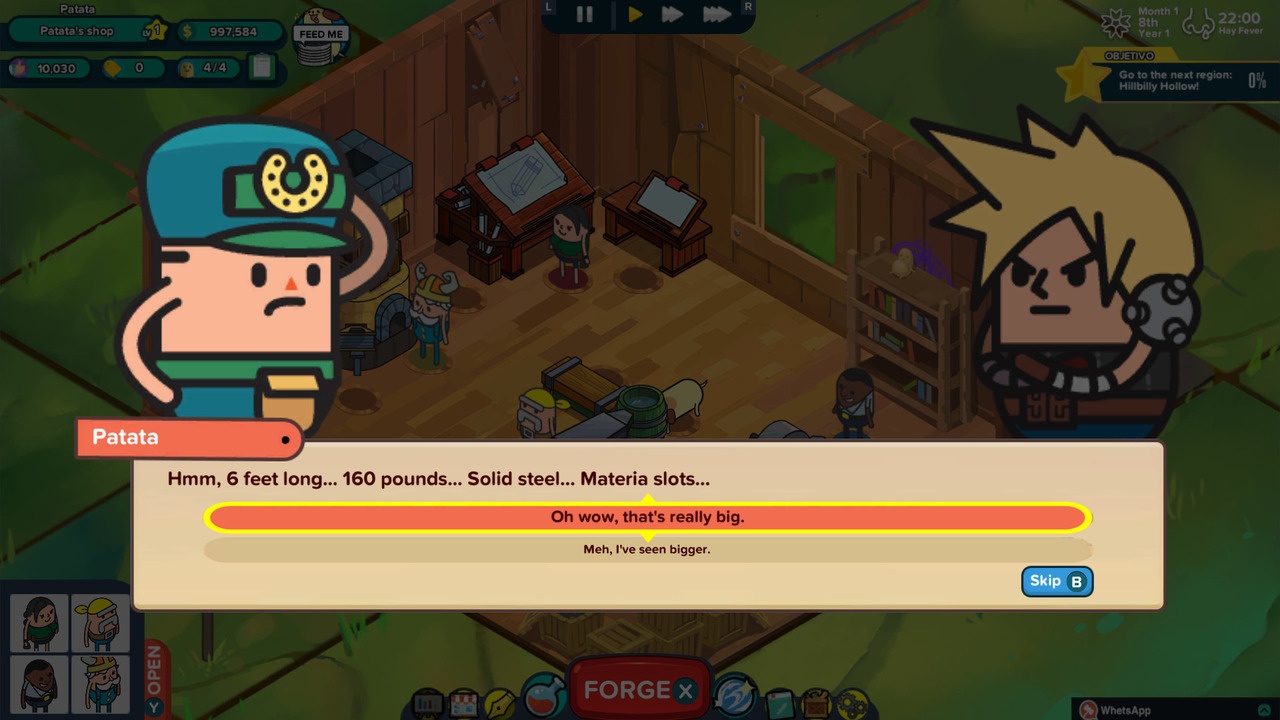 But what helps set this game apart from everything else in the genre is the humor. Management games tend to be very dry and serious, and even the greats, like Game Dev Tycoon, tend to fire single jokes out occasionally and call it a day. However, the dialogue and events for Holy Potatoes is wholly irreverent and wonderful. From the very beginning, your main character is singing some Mulan for the audience. The spuds are sometimes in total disbelief as to what they’re doing, especially working for someone who is clearly ditzy and a bit unhinged. There are references everywhere, from very specific and familiar looking weapons that you make to quests from legendary heroes visiting from other games (and animes, actually). I especially liked the whimpering “Locksmith” who showed up with spiky hair, crying for me to fix his giant key. It’s great, and the humor is peppered generously throughout, never overwhelming you with constant zingers but prevalent enough to keep everything light.

Best of all, Holy Potatoes is quite short for a game of this magnitude. Despite all the details and all the stuff that can be unlocked, purchased, polished, enchanted and more, I was able to get the main story of the game finished in about ten hours. Ten hours are nothing for a simulation game! Yet, if you still want to get more, there’s plenty more in terms of replay, finding additional items and unlocking even more content within the game. It’s this perfect balance of knowing when you’re full and deciding if you want just a bit more dessert before you head home.

I deeply enjoyed my time with Holy Potatoes! A Weapon Shop?! and I hope this sets a pace for Daylight Studios to bring even more potatoes to the Switch in the future. With a great display of engaging management, versatile products and hilarious moments, this weapon shop is one that players may spend the rest of summer inside, trying to perfect that one beautiful sword.