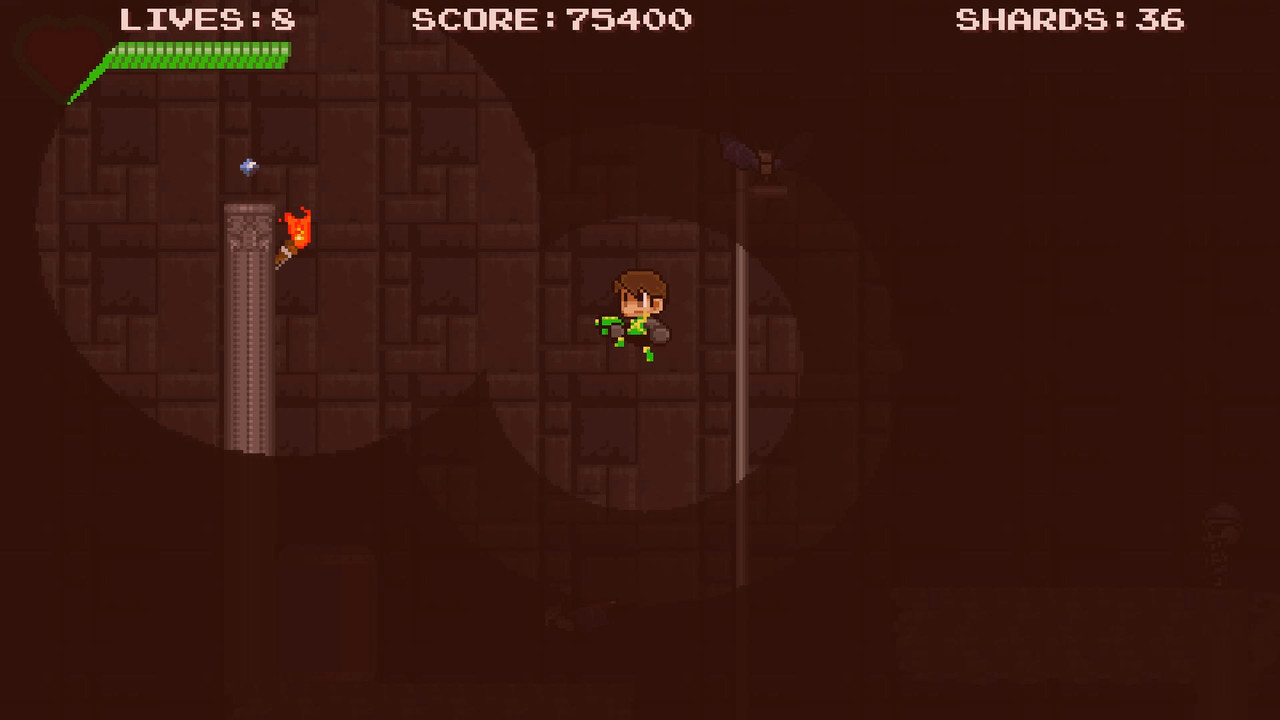 Jandusoft really has a spot in their hearts for games that reference the older style. Caveman Warriors, which came to us so very long ago, captured a lot of the novelty and effect of the SNES generation, even if it didn’t quite live up to the (arguably different) standards of today’s scene. With their newest venture with NAPE Games, perhaps they decided that being a bit more precise and more on-the-nose was a better approach, as they go further back in time to the 8-bit styling. While the latest title might not be one to bump a spot for the top ten of 2019, it’s very easy to see – and enjoy – the charm of V.O.I.D.

V.O.I.D. stands for Virtual Overpowered Intelligent Droid, which is weird because I don’t think we see that acronym ever again, but whatever. You are the main character of either Alpha or Omega, two Ploids (we use that title instead) that are a merger of human and robot DNA. An alien race has invaded Earth and virtually decimated everything, leaving the future of humanity bleak and uncertain. To help correct this, you must use a series of time portals to go to different and distant lands, collecting shards to help power your machine in the present and fight back against the invaders and ensure a future for everyone. Alpha is more of the speedster, but that can make for a dangerous existence. Omega is a tough-as-nails blaster type, but those weapons certainly weigh him down. In either case, it’s up to one of them to visit everywhere from Feudal Japan to the desolate Ice Age and even amongst the Lost City of Atlantis, there’s nowhere these two Ploids won’t travel to try and save the future.

As mentioned above, V.O.I.D. can play in one of two styles: speed platformer or gunner platformer. If you choose to be Alpha, you’re signing yourself up for a very different experience than that of Omega. Choosing Alpha means one hit kills, no ranged weapon and the critical importance of collecting shards increases tenfold. However, that also means you get to give yourself a different approach to the game, using your five short lives per run to figure out exactly where you plan to go or what you’ll be doing. There is a code system that allows you to continue from previous progress (a la NES Mega Man), but that doesn’t ensure your victory: it just means your last run won’t totally be in vain. On the other hand, if you opt into the shoes of Omega, you can take several hits before losing a life, can blast enemies from a distance, and can still jump on them just as Alpha can, effectively giving you all the benefits with none of the drawbacks. Yes, you move slower, but that doesn’t really factor in a lot once you’ve adjusted your play style. It’s sort of a cool concept: you have the same game that you can play in two different ways. 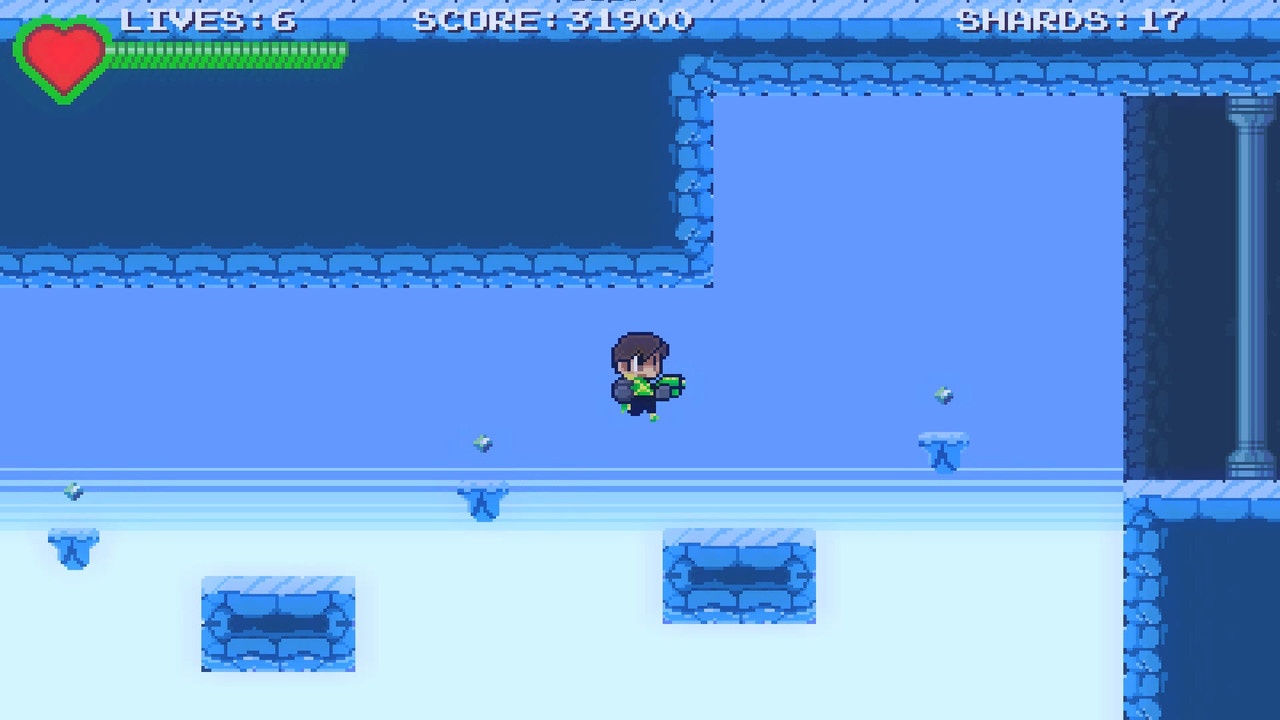 The gameplay itself is tight and enjoyable in V.O.I.D., though it can be repetitive. You have anywhere from 5-8 stages of play per time portal, and every land carries its own caveat. Going into Atlantis means underwater levels, where you’re not allowed to double jump (but you do have extra high jumps, which is nice). Heading out to the Ancient Desert means quicksand of death and one stage of rapidly rising dunes that’ll kill you if they touch you. There’s plenty of variety therein to experience between the time portals, but the song always remains the same: defeat bad guys (because they’re annoying, not because you get points), collect shards (because 100 equals an extra life, that’s it) and get the big shard at the end that signifies the end of the stage. There was a conscious choice to make sure V.O.I.D. tapped into old school goals and ideas, so you don’t have to worry about achievements or crafting or any additional jazz, just getting from point A to point B in a decent amount of time.

In that aspect, I would say NAPE Games succeeded in their creation. Everything about V.O.I.D. feels sufficiently throwback, from the slight float to the controls to the importance of hitting blocks and achieving precision jumping. Especially when you encounter the slippery ice floors of the Ice Age, you need to work out your timing immediately, being aware of any delay your controller might have in regard to you pressing the button. It’s not as unforgiving as something like a true NES game might be (they have accounted for good technology), but being imprecise means missing your chance and, as Alpha, ending up dead. The stages initially felt short, but then you realize there’s no save system in place and the name of the game is to be able to go, start to finish, in one sitting. The whole thing comes together very nicely in that regard, and you understand the target demographic should appreciate and love the platform game genre as a whole. Whether you want to rush through the damn thing at breakneck speed or otherwise just be a crafty, powerful hero, they’ve got you covered on both ends.

The visuals of V.O.I.D. are pretty decent as well. Pixel art all the way down, you get moments of clarity and artistic clout when you have the small cutscenes between the teleportation modes, or when you realize that everyone has different hair styles and there’s more than just 8 bits to work with, unlike when the old pioneers carved out their classic games. The enemies have enough variety to them, but you’ll see the same sort of sprites copied throughout the stages, if not the worlds. Not a huge fan of the scuttling bugs you encounter immediately in the Ancient Desert? Too bad, that’s what you’re gonna see a lot of until you get to the shard at the end. Still, it gets the job done and there are color variants that signify different behaviors. I do wish, however, there was an option to mess a bit with the filters that seem to crop up during the game. Perhaps it’s my imagination, but it looked like a couple of stages went through a CRT filter for a period of time, and I’d like the option to toggle it on or off. Sadly, like real old school games, the options menu for V.O.I.D. is suspiciously absent. 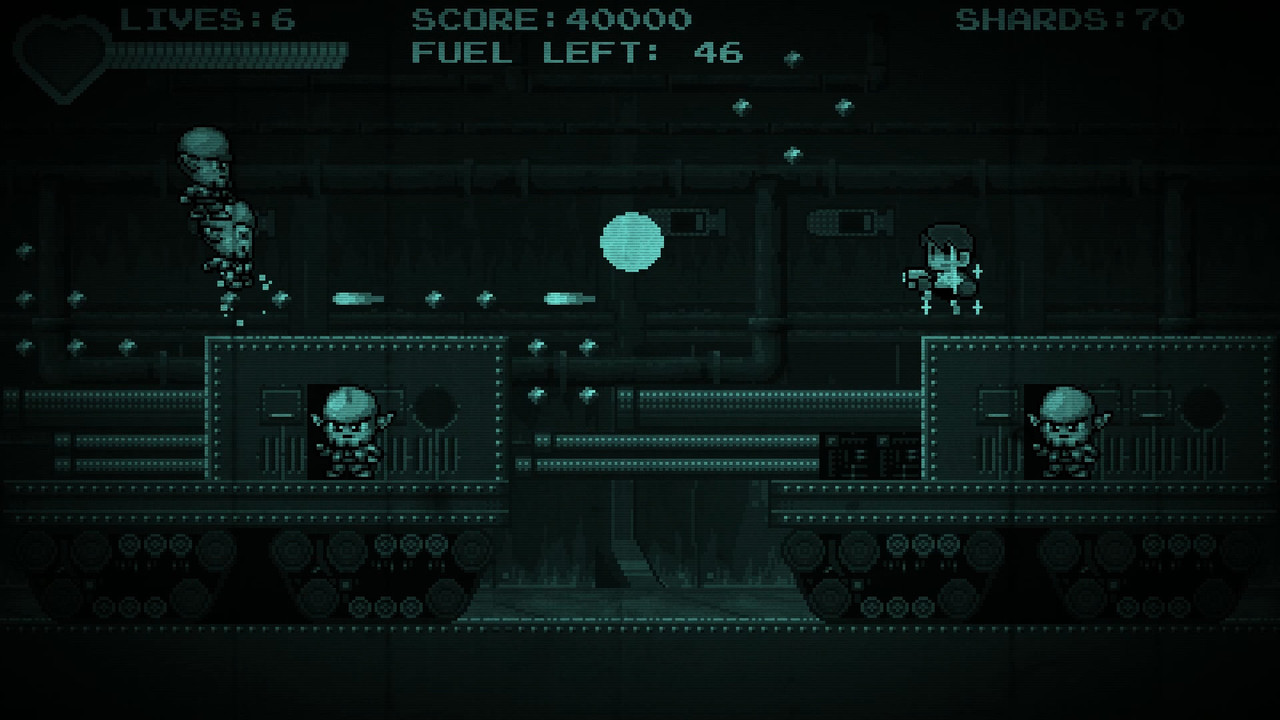 This opinion on the visuals also reflects the soundtrack of the game, which is, as you might expect, chiptuned. Rather than trying to be a flourishing orchestra of electronics, you get a lot of the same loops over and over in the worlds, but the tone does change on the levels AND you get a different atmosphere when you enter a different time portal. It’s not something I’d drop onto the stereo for listening when I’m trying to write, but it helps to pain the picture that is the Ploids’ quest for shards and the future they’re trying to save.

Game reviews shouldn’t be influenced by a price tag, but we all know that it certainly affects your choice of purchase or not. For four bucks, V.O.I.D. is a good time with a decent amount of replay value. I personally recommend players who want a challenge, stick exclusively to Alpha so that you can really get some flex in for your dollar. Playing through as Omega feels crazy easy in comparison, so having that mode for when you’re relaxing or want to let a newer player get a feel for things is a good idea. All in all, it’s quaint, it’s functional, it’s fun enough and it got me to stay focused for almost an hour. Not a bad experience at all.

A decent platformer with some versatility, V.O.I.D. charms players with some good ideas and decent level design, but the ride is over pretty quickly.