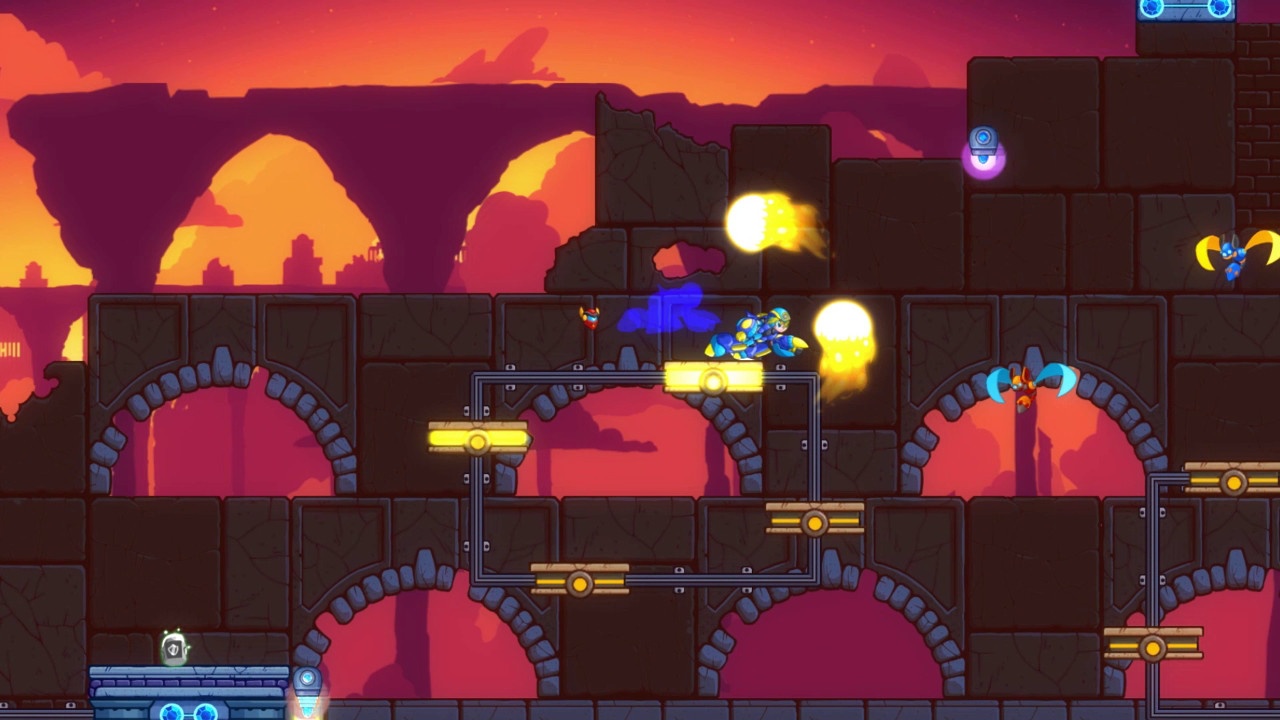 It really feels like the Nintendo Switch is trying to get me to forget about my PC altogether. I can understand why: I’m a hardcore Nintendo fanboy, but I’m not blind to how Nintendo has made some poor decisions in the past (and currently). PC gaming has helped to fill in the gaps that Nintendo leaves open, bringing some interesting indies I wouldn’t find on consoles and also allowing me to play previously console exclusive titles without needing to shell out for another machine (though I might as well buy a PS4 if I want to play Final Fantasy XV and have it perform decently). Yet now all my favorite indies are coming to the Switch, allowing my roguelite thirst to be slaked wherever I go. And now one of my biggest namedrops of all time has appeared, and it’s in fully formed glory. Ladies and gentlemen, please give a warm welcome to 20XX.

20XX is the robotic action platformer that’s essentially a roguelite version of Mega Man X, and there is absolutely no hiding or disguising that fact. Batterystaple Games has created an original storyline that feature Nina and Ace, two cyborgs that have been sent by the Ark, an orbiting space station, down to Earth to deal with a robot uprising problem. Nina and/or Ace have to deal with eight robot masters, each in charge of their own domain, and, after dealing with them, then things get…serious. There’s a bit of a plot twist here, but, as anyone should be able to guess, robot uprisings very rarely start apropos of anything influencing them. Basically, Nina and Ace have their work cut out for them, as anyone will be able to find out in this hellishly exciting and difficult game.

Nina and Ace help to capture the best variations of gameplay for longtime fans of the Mega Man series, but, again, they do so in their own, original 20XX style. Nina is more of your classic, long-range blaster cyborg, able to power up her shots and peg off smaller robots and obstacles from afar. Ace is an energy blade wielding melee expert, dealing a bit more damage per hit but ultimately putting himself in greater danger from the up close and personal approach. Both heroes start with the traditional accoutrements of wall jumping, dashing and having incredibly tight reflexes to adapt to the hostile environment, but the starting powers and style of the characters quickly shifts. Regardless of where you start, your first victory against the round one robot master opens up three choices for where to go next, and these choices become invaluable for planning out strategy and gameplay. After all, beating a boss gives you choices: you can either take their power and add it to one of three “extra power” attacks, take a bit of cash (called bolts) to buy stuff along the way, or choose a third, randomly selected passive powerup to make the run a bit easier: maybe extra life meter, better run speed, or even a stronger base attack. 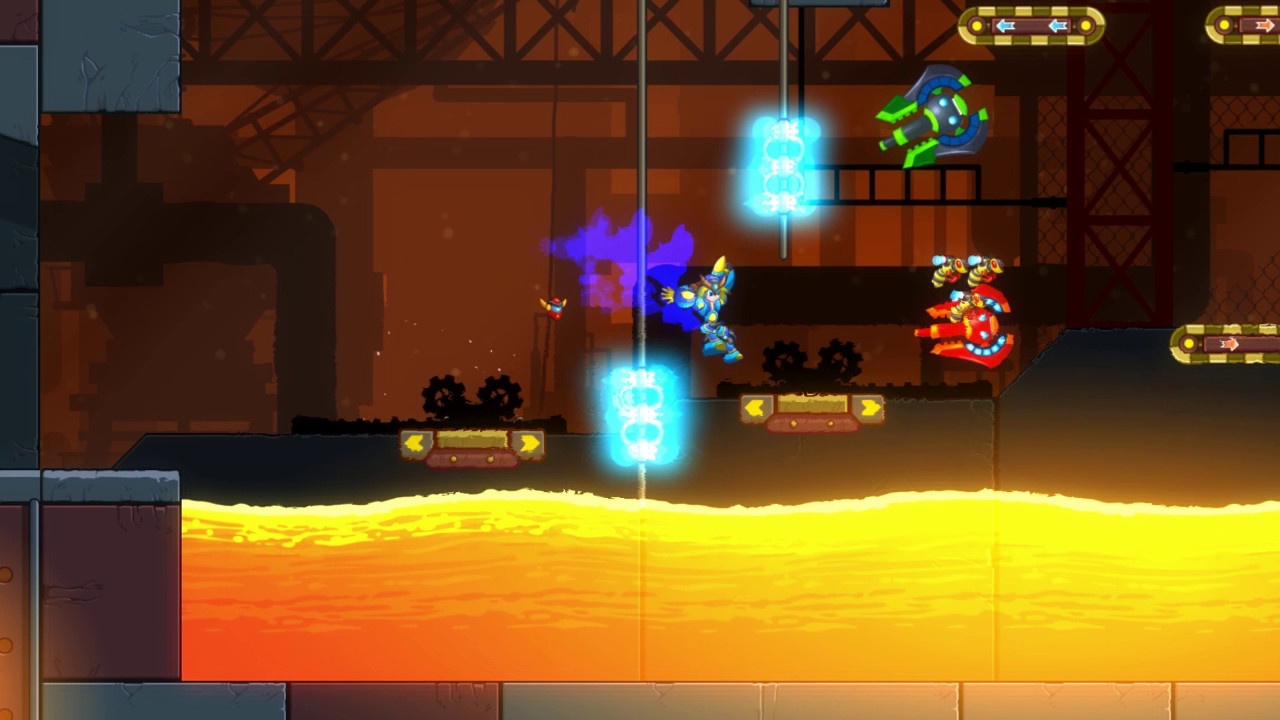 The level of customization is the first layer of intrigue that comes with 20XX, as your character gets gradually more and more impressive the longer the run goes. Besides simply amplifying stats, you’ll find gear that alters your shots, your jumps and your armor, respectively, but only being able to utilize one at a time. So if you need to choose between double jump or hover jump, that’s a change in how you want to move forward in the game. Do you want your charge shots to charge even further to deal extra damage OR would you prefer enemy shot-blocking bullets? These aren’t just choices you make during the run, either: these are choices you can make prior to entering the game, either by toggling on and off permanent character assists or by purchasing one time, one-off equipment that can seriously make all the difference. These purchases are made with Soul Chips, and they are the one and only thing that carry over after your robot explodes. Moreover, the Soul Chips take a Crypt of the Necrodancer/Immortal Redneck approach and demand you spend them all before re-entering the game. No hoarding your chips till you have some ungodly amount, you gotta spend them as you get them!

For me, personally, I loved having all the extra bells and whistles enabled when I went into a run for 20XX because I like the feeling of being an overpowered God in the roguelite world. That’s why there are some universal constants in my decision-making: get the Twin’s fire shield to keep me safe, focus on overpowering my base weapon, wreak havoc like I’m a horseman of the Apocalypse. What’s great about 20XX is, even if you get a bad roll out the gate, that doesn’t spell the end for the run. With a game like Enter the Gungeon or Binding of Isaac, a bad first floor can basically ruin the entire process, making you feel bogged down and sluggish compared to when you last played. In 20XX, you have some control over things: even if you end up starting with the terribly difficult sky levels as a start, you can take solace in knowing that the second boss is your decision. Maybe you don’t like the icicle weapon (God knows I don’t) but you don’t HAVE to pick it up: get some bolts instead! It’s roguelite in the purest form: procedurally generated items and stage layout, but a real sense of being the captain of your own destiny.

Additionally, the co-op mode of 20XX fulfills some dreams that I never realized I had at night. I stopped playing Mega Man somewhere around X2, so I didn’t get a chance to see how far things like the Gameboy Advance or even Playstation iterations took the game. But being able to have two players on the screen and work together at the same time is an exciting and powerful balance of things. Boss fights, sure, those go faster, but having a second player to help sweep the room of annoying minibots when you’re trying to nail a disappearing platform or someone to basically keep the others busy while you work towards that crate that might have some HP in it is fantastic. Sharing the bolts between the two of you also makes for actual co-op communication as you both argue over who gets to buy what out of the recycle shop. I also think co-op makes the skill challenges that crop up every so often a whole lot more challenging; you never realize you’re a lone wolf until you’re cursing out your friend for being slow on the uptake and not destroying the last target in time. 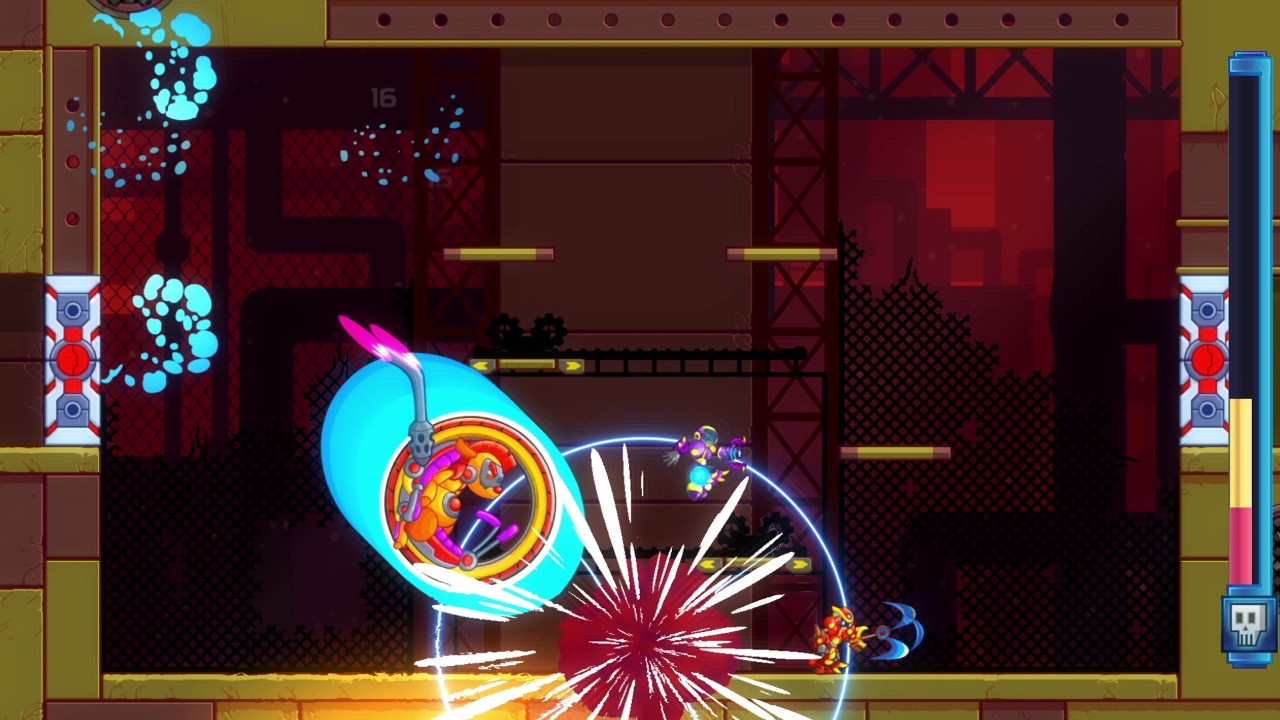 With three levels of difficulty, 20XX knows it’s audience wants to try the experience to different degrees, and that’s why there are so many variations of challenge here. Besides deciding if you want to do a hard mode run with none of your augmentations turned on, there’s also the daily and weekly seeds, generated for single player or co-op runs, and leaderboards that everyone can see and glower at whenever they load up the game. You can input seeds and share with friends, so fantastic and terrible times can be had by all. And, if it ever feels like things are getting just a bit too easy, there’s always a new way to approach the game: maybe challenge yourself and don’t pick up any powerups? It’s certainly easy enough to avoid getting goodies, and extremely hard to resist them.

20XX has also made quite a splash due to the tremendous level of care and maintenance the developer has given the game over the years, and I think it shows here in the Nintendo Switch port. WIth a modest install footprint, 20XX runs like a buttery chariot in both docked and handheld mode. I never once experienced a crash, a stutter or even a bobble in the music, and I must have done at least twenty runs since I received the game several days ago. It’s clear this has been polished to a golden sheen, and I really hope that it continues to perform as well as it has. That is my only concern: the constant patching the game has been allowed to have through Steam. Obviously, with NIntendo’s policies on eShop updates and content approval, balancing patches and additional content will be extremely slow to appear in comparison to what veteran players may be used to. Still, content updates are always worth the wait, and we’ve seen that the game has gone above and beyond to be clean and balanced prior to arriving on the Switch. Fingers crossed that the good luck streak continues.

All in all, 20XX is what I’ve been dreaming of for the Switch since the indie revolution began, and I couldn’t be happier with this port. It runs amazingly, the game is engaging and fun all over again, and new players won’t feel any more lost or frustrated than old players when it comes to trying to get past level 9. The replay value is off the charts and the commitment to quality gaming has never been more prevalent. If you love Mega Man, and if you love roguelites, then you simply MUST get 20XX.