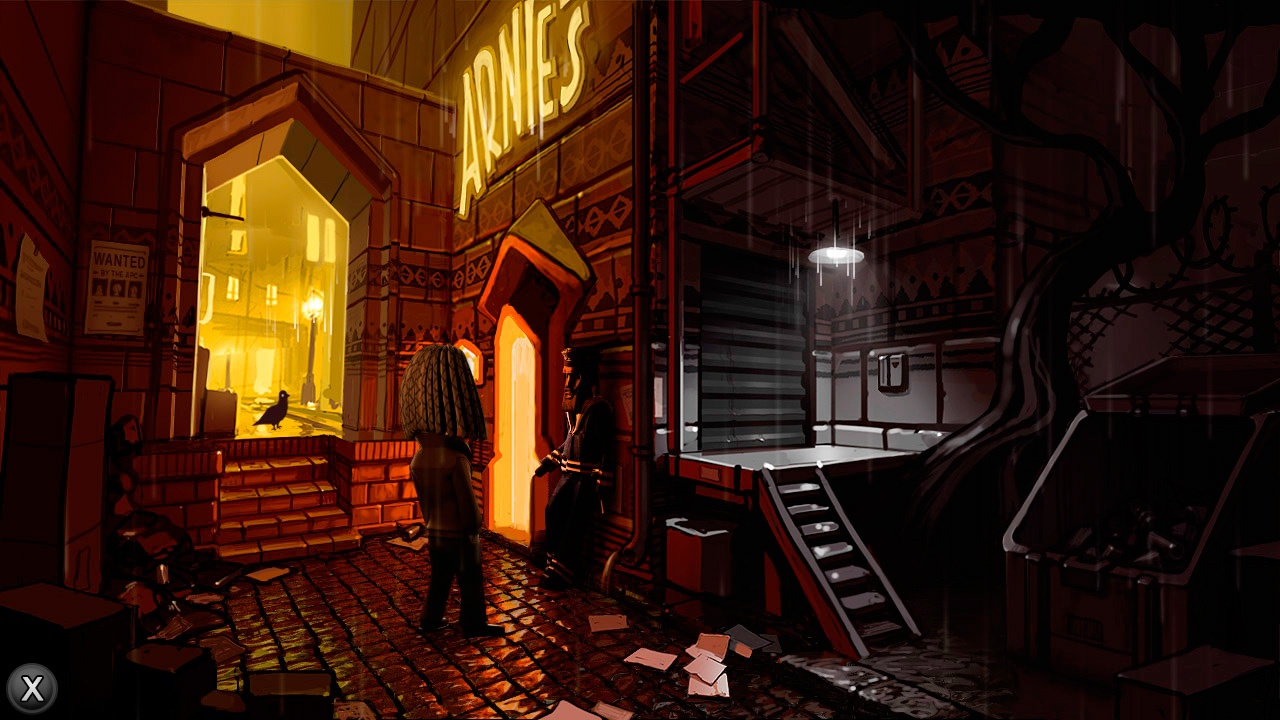 You know the old saying, If it ain’t broken, then don’t fix it? Well, in video gaming, it should be one of the most basic rules when emulating a certain style or genre, or more importantly, creating a sequel. Thankfully, this is a piece of advice that has been followed with SkyGoblin’s second furore into the adventures of Bwana and Kito with their release of The Journey Down: Chapter Two, on the Nintendo Switch.

If you’ve played the first chapter within the series’ trilogy, yes, there’s a third chapter too, then you’ll be instantly familiar with what’s on offer here. The game follows on from where chapter one left off, meaning I won’t go into the plot of this title, as this would produce spoilers for the ending of the previous game. However, we have a whole new story and setting to discover as we reacquaint ourselves with the two hapless brothers, Bwano and Kito, along with their mysterious partner-in-crime, Lina. Although  released as a separate game, this isn’t a standalone title; it really is a necessity to play through the first chapter in order to fully appreciate this new adventure.

The story continues with the mystery surrounding the revelations contained within a lost, but now found, journal and the disappearance of the two brothers’ adoptive father, Kaonandodo. After leaving their home city of St. Armando, the trio of explorers-by-circumstance now find themselves within the harbour town of Port Artue; a more seedier setting from their home town, with a series of criminal backstreets littered with corruption. With an army of paramilitaries, sent by the St. Armando Power Company, on their back, as well a brought-out local police force, the three heroes need to stick within the shadows; relying on the goodwill of helpful residents and the utilisation and manipulation of items found within this second series of the point-and-click gameplay. 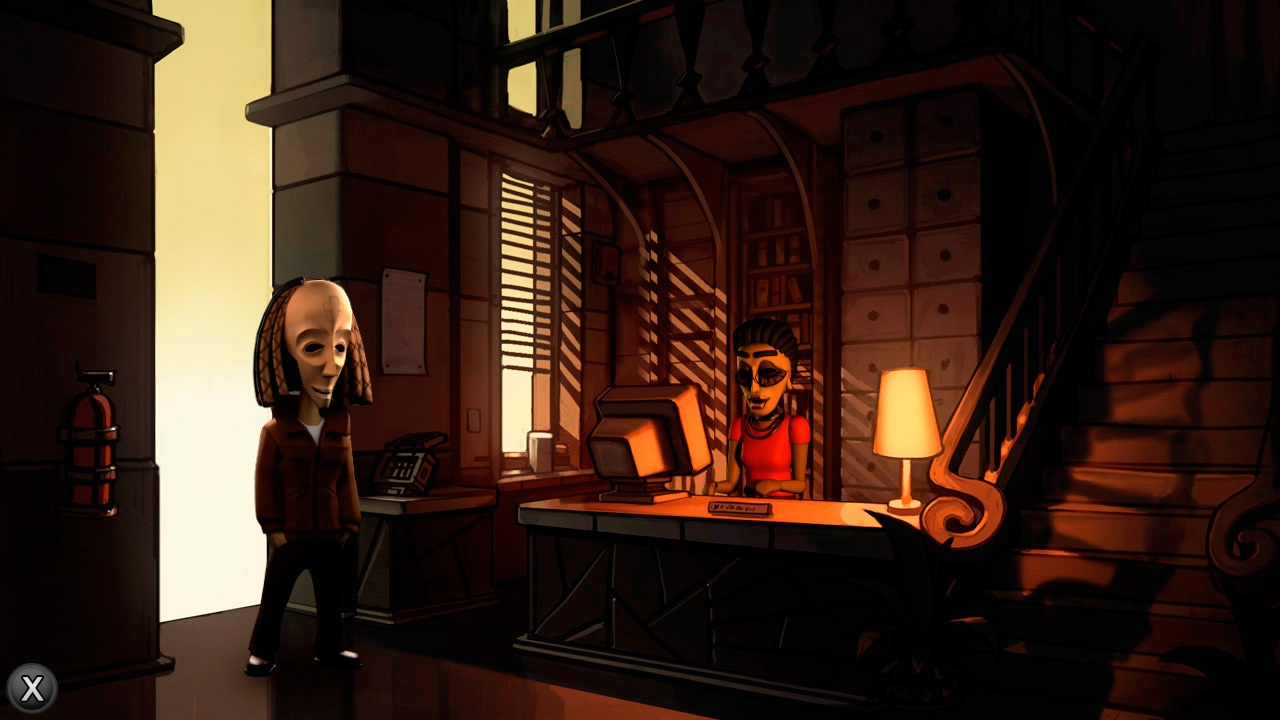 Although this second outing still retains the charms of the old LucasArts style of adventures, it’s humour has been somewhat toned down in this adventure. It’s not necessarily a bad thing, as it matches the backdrop of the story and the setting around it. Saying that though, it’s not all completely redundant and still retains a sprinkling of banter between the two brothers. The same can also be said for the graphical presentation this time round too. Although still impressive, the port of Artue contains a deeper palette from the colourful locales of the first adventure. Again, it matches superbly the seedier style of the port and corruption that flows through its streets. The mechanics from the first title remain the same though, with cursor control for selection and a menu bar for housing collected items. It still retains its tightness of execution and provides an effective tool for selection and manipulation.

This isn’t necessarily a trade-off though, as the backdrops look superbly designed, boasting a bigger production value, although some of the graphical inconsistencies between foreground characters and background visuals still remain.; this doesn’t detract from the overall experience though, as the game’s other mechanics and elements shine through brighter than ever. The top-notch voice-overs remain, with each character retaining the same actors from the first game and the soundtrack still remains as catchy throughout. It all adds to a very high quality of production values and, ultimately, an enjoyable experience as you play through the game’s offerings.

Despite the game following the same mechanics from the first chapter, this second outing does appear to have a larger character roster, more content and a longer running time. However, although the number of character interactions and styles have increased, some of these can be quite hit-and-miss in their presentation, or interest within the overall story. As with most games within the point-and-click genre, advancement comes from the manipulation of items to create, or use, specific objects in order to force the story along. Again, The Journey Down offers a diverse range of interaction here, although there’s nothing too challenging or down-right weird in these puzzles, although some of them can be quite novel in their execution. Saying that though, towards the end of this venture, there are one or two head-scratchers that could have you stumped for a little while. 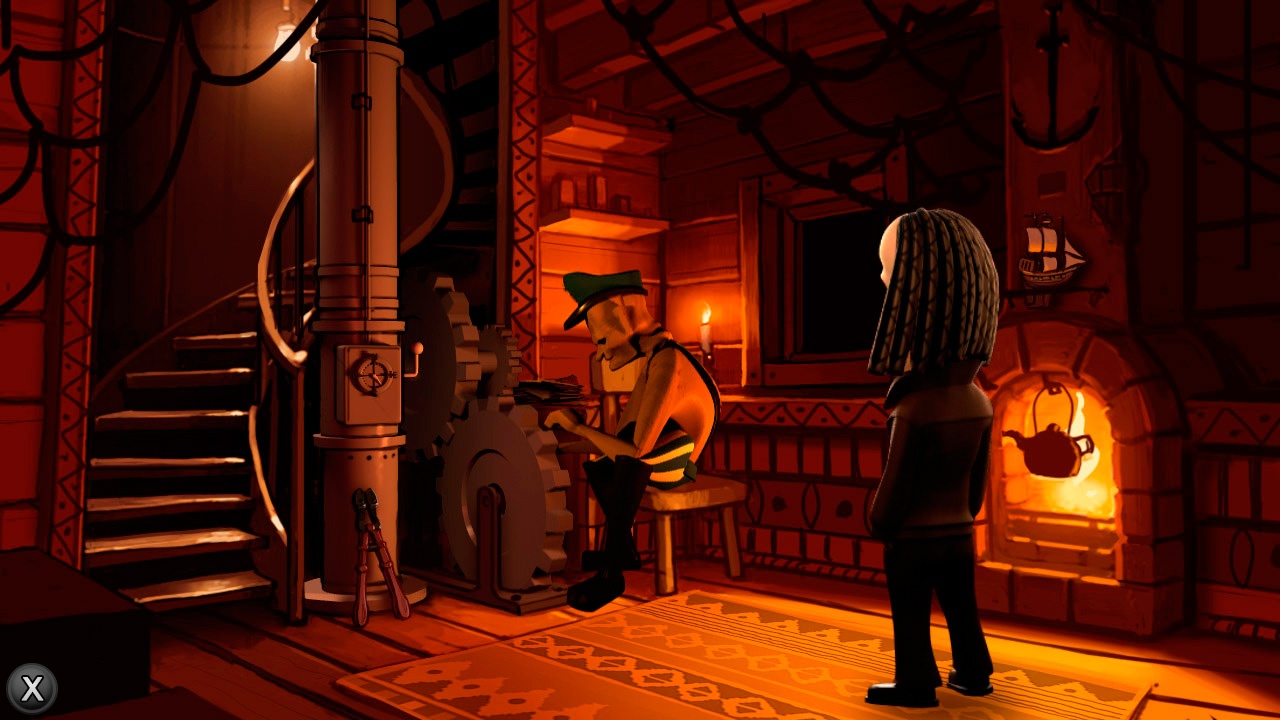 Being the second, or middle part, of an eventual trilogy, this title continues the story well, and even produces another cliff-hanger at the end in order to produce, yet another, anticipation for the third and final setting of the series. Seeing as the control scheme of the first game was tight and responsive, this title carries on the trend, producing a satisfying feel to the core mechanics of its gameplay. If there’s one complaint though, I did feel that this game incorporated a lot more back-and-forth movements between certain locales; often revisiting old haunts though is essential in uncovering new information or settings for the story to advance. It’s not game-breaking or anything, but did feel tiresome at times.

Overall, The Journey Down: Chapter Two continues the adventures of Bwana, Kito and Lina in the same, stylistic fashion as the first. It retains the same charm, one that isn’t often found in games of this genre these days, but is one that easily mimics the reminiscing values of similar games from the nineties. Saying that though, this second entry into the series does contain a much more sombre and serious tone, but one that is just as equally enjoyable as the first. It’s suitably surprising and cliff-hangered ending produces a nice anticipation for the third game and if you haven’t played the first, then you really do owe it to yourself to play through that game before attempting this one. For me, personally, I have played games within the genre that were more engaging, but that doesn’t detract from the fun that can be had with this title, or within the complete series of games that this chapter belongs too. At the end of the day, it is fun, it is engaging, looks beautiful and contains a certain charm. In a nutshell, if you’ve played the first game, then you simply have to play this one too, if you haven’t played chapter one, though, then what are you waiting for, as chapter two is now here and is waiting for you to indulge yourself within its immersive story and charm; plus it’ll leave you wanting more by the time you’ve finished.