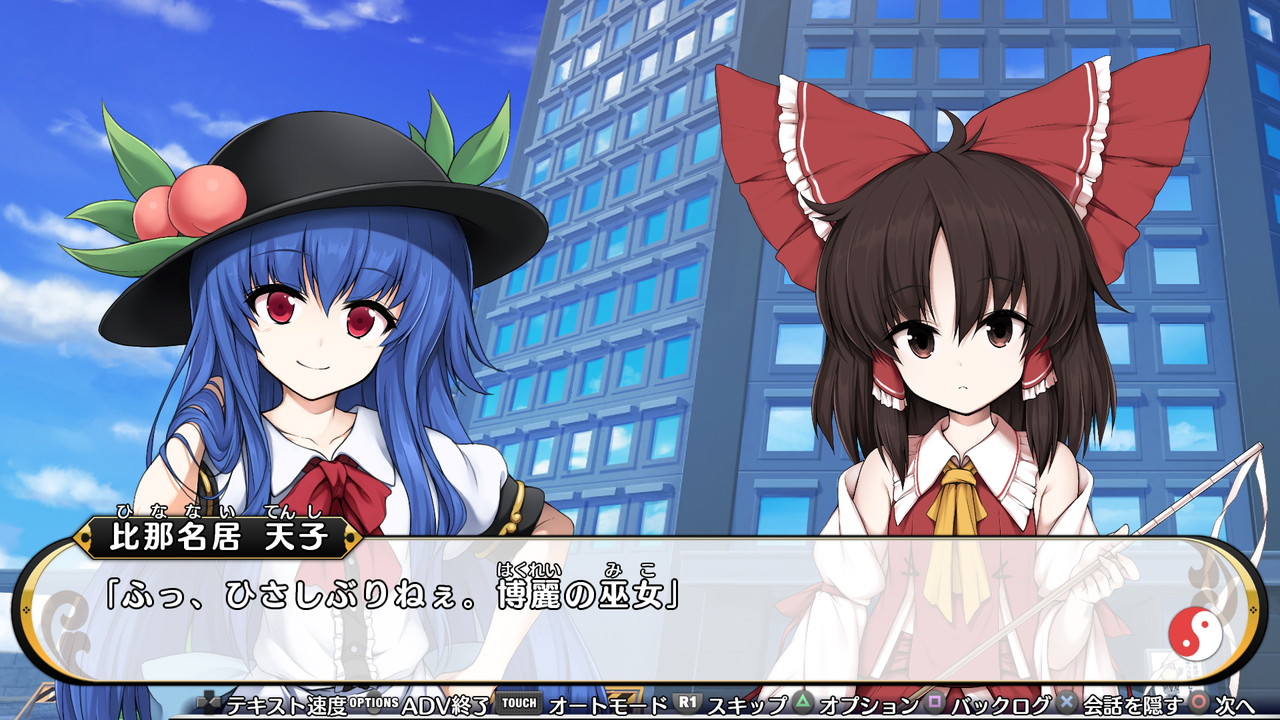 The Touhou Project, or otherwise known as the Toho Project or Project Shrine Maiden, first began life as a Japanese shooter. However, the series took a new turn with Touhou Genso Wanderer, a dungeon-crawling role playing game. Its latest iteration now comes in the form of Touhou Genso Wanderer Reloaded, a definitive edition of the game that contains all of the previously released DLC, as well as a host of new content and characters with which to return to the land of Gensokyo and rediscover the incredible journey through the Tower of Desire.

Devloped by AQUA STYLE and published through NIS America, this rogue-like adventure follows the story of Reimu Harukei; a young girl who fascination with a ‘golden sphere’ soon leads to a journey through strange lands as she tries to find her way back home after a series of disastrous events. The game begins with Rinnosuke Morichika, the sole custodian of the sphere and, after Reimu tries to get a hold of the magical ball, an accident releases a magical force that possesses Rinnosuke, creating the story’s evil antagonist. After battling the possessed form, Reimu finds herself transported far from home, sending her on a quest to return to her homeland; a path fraught with the dangers of the sphere’s dark powers and evil clones.

The main premise of the gameplay revolves around a rogue-like blueprint; creating a series of random dungeons that need to be traversed. However, failure to do so for you or your party, results in a trip back to level one in order to start the journey again. It’s not a mechanic that’s to everyone’s taste, although it can’t be argued that it does create a game that can possess an extended play-time; as well as a challenging mechanic that forces you to be aware of your actions and the environment around you. In order to help with this task though, the game does present a lot of information. In fact, prepare to be bombarded with the stuff; something which eventually leads to some confusion with its overwhelming explanations, yet at the same time, also misses some vital points within the game’s mechanics. 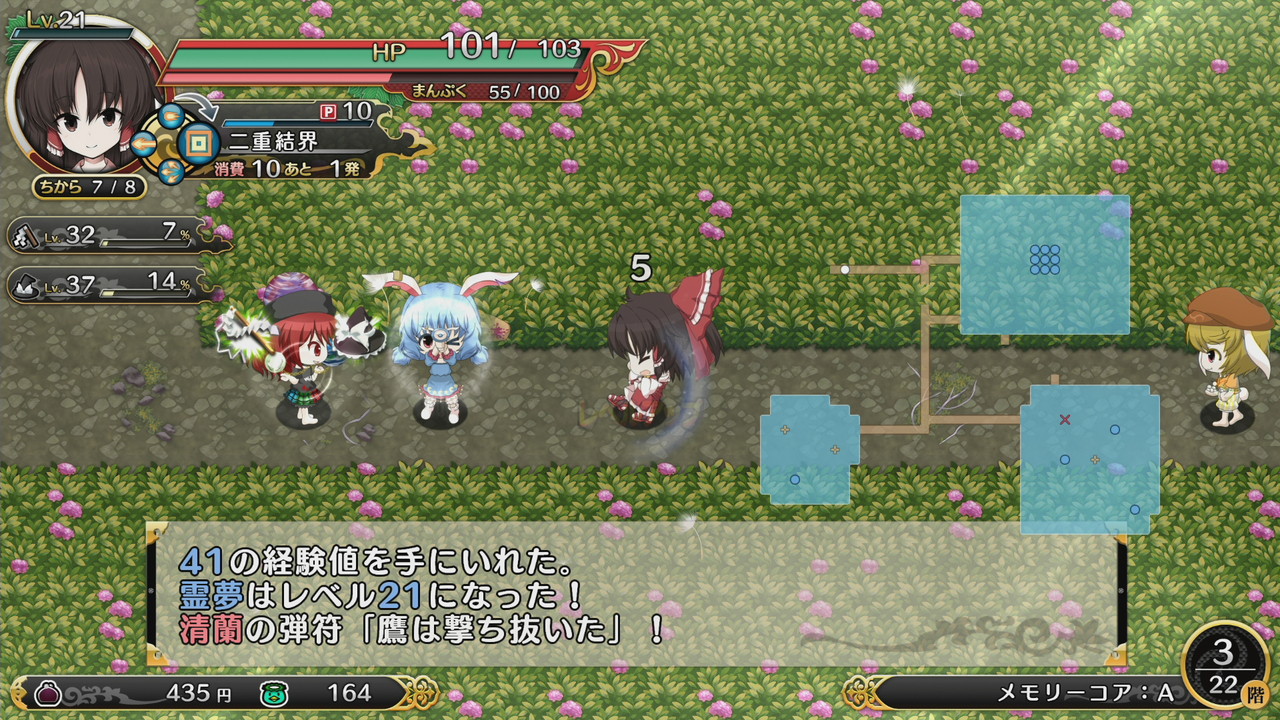 As well as the main body of the screen displaying the playing area, a series of stat bars decorate the fringes, as well as a basic form of mapping and text boxes taking up the rest of the space. The majority of the information is pretty self-explanatory though, with health points and accrued monetary values being explained. However, other forms of informative displays are less explanatory. For instance, the game incorporates a hunger bar which needs to be filled by eating food. However, the game fails to inform you of the consequences of not maintaining this form of health. Although to assume that you’ll die can also be called self-explanatory.

With so much information on-screen at any given time, it forces the main playing area to be a little cluttered; thus reducing the field of view available to you. This can at times lead to surprising attacks from unseen forces; It can be a bit frustrating at times, especially with the games rogue-like mechanics, reducing your valuable forms of health unnecessarily. For a game that requires some form of strategy in how you explore the dungeons and fight the enemies within, this is a mechanic that feels as if it is fighting against you in what you are trying to achieve; rather than providing any help.

However, to help with this, the game contains an abundance of weaponry that can be discovered, as well as a number of defensive elements. These can range from a variety of melee weapons up to a series magic-granting cards; although the long range attacks of danmaku projectiles are probably the most useful items in order to advance. This soon becomes apparent in the experimentation of items, as with the rogue-like qualities of the game, you soon find yourself on certain levels within the dungeons that contain a series of spikes in their difficulty. Should you get knocked-out, you restart the dungeon at the first level, although any weapon upgrades remain, giving you an easier ride, as well further upgrades, as you retread old ground. 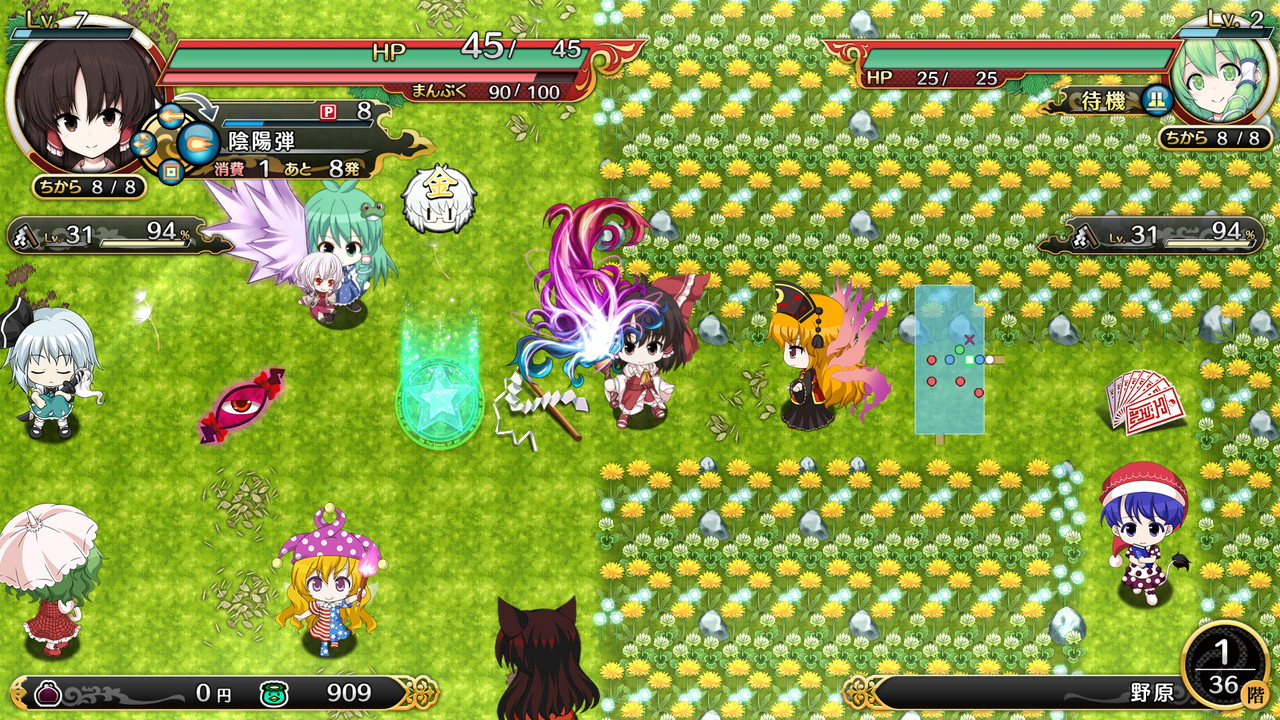 Between the exploration levels of dungeon-crawling, the story progresses through a series of stylistic and often animated, cut-scenes. These scenes retain their original Japanese voice-overs, adding to the charm of the game, with full English subtitles. However, these sections of the game can also take up a lot of your playing time, with some conversations being over-long in their executions, which can be frustrating if you’re itching to get back into the main premise of the gameplay. This can add further detriment with a rather lacklustre story and elements of interaction that bear no meaning to the overall plot.

Despite its faults though, the charm of this title comes in its values of playability. It contains a typical Japanese aesthetic which is very appealing, often full of vivd imagery, bright colours and a cute cast of various characters; especially with its unique visual presentation of rendered characters upon an 8-bit background. It adds a touch of retro-inspirations, yet feels very modern in its execution. Despite some lengthy frustrations, the pacing of the game sits nicely upon the Nintendo switch though, allowing to drop-in and drop-out whenever the mood takes you; making it an ideal game in a casual setting.

It can be a difficult game, especially if it’s your first venture into the Japanese role-playing genre, however, it’s also one of those games that requires you to put time and effort into it in order to get the most out of it. If you can see past its frustrations and overly-long narratives, then there is a lot to like here; especially with its bulked out content of three DLC packages, extra characters and new storylines to explore, producing what is now the definitive version of the game. However, saying that, I just can’t seem to shake the feeling that this is probably a game that will fail to engage the majority of its players, with its lack of sustaining any interest due to some poor presentation values and overly long mechanics for too long a period.