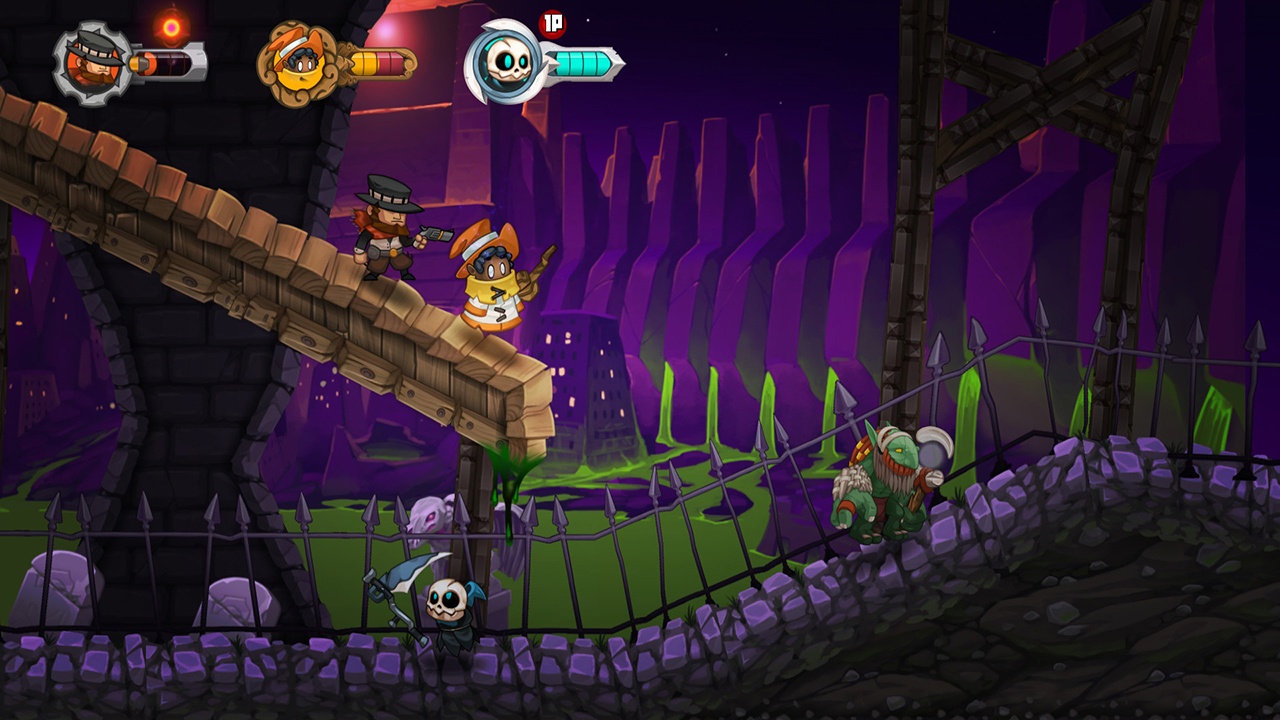 It really seems like people get this kind of game into their heart and just can’t stop nodding their heads along with personal satisfaction and affirmation about what they’re doing. They just watch the code and the characters come to life in front of them and they scream, internally, “THIS IS THE BEST THING EVER AND I MADE IT!” They get the alpha all pounded out, are in love with it, and show it to friends and trusted colleagues. The friends play it, agree it’s good, and then someone raises a single question: what about single players? The developer, not willing to let their dream defer, quickly throws together a fix and announces it’s all better. And the friends simply have to agree: a single player can do it now. Technically. That, weirdly, I think is the origin story of Grave Danger.

Grave Danger is about three misfits who’ve been branded as outlaws by a clearly evil and world-dominating type lich skeleton dude. The three characters – Dante, Elliot and Malice – all reluctantly agree to work together to get to the head jerk and clear their name. I mean, are they good people? No! Dante was robbing a train when we meet him! But they aren’t as bad as people say, and, well, they’ve been labeled the heroes of this game, so we don’t have a lot of choice except for to accept them as our heroes. Go figure.

Grave Danger is a cooperative puzzle platforming game with a good amount of action mixed in. Each of the outlaws has their own special skill, and longtime gamers will immediately get a Lost Vikings vibe from it all. Dante can climb walls and is the best shot with his gun. Elliot has a double jump and can do a kind of shield magic to save himself and damage foes. Malice can legit float for a short time and drops spirit bombs, and you’ll start to wonder why you don’t just play as Malice exclusively, but those damn walls get in the way. Working together, the three of them must all reach the goal: no criminal left behind. Doors can be unlocked remotely, elevators can be operated by other characters, and sometimes three switches need to be hit all in a certain order. There’s certainly a much bigger focus on problem solving and logical thinking, but there’s plenty of chances where you just need to swing a scythe or shoot a character back to hell. 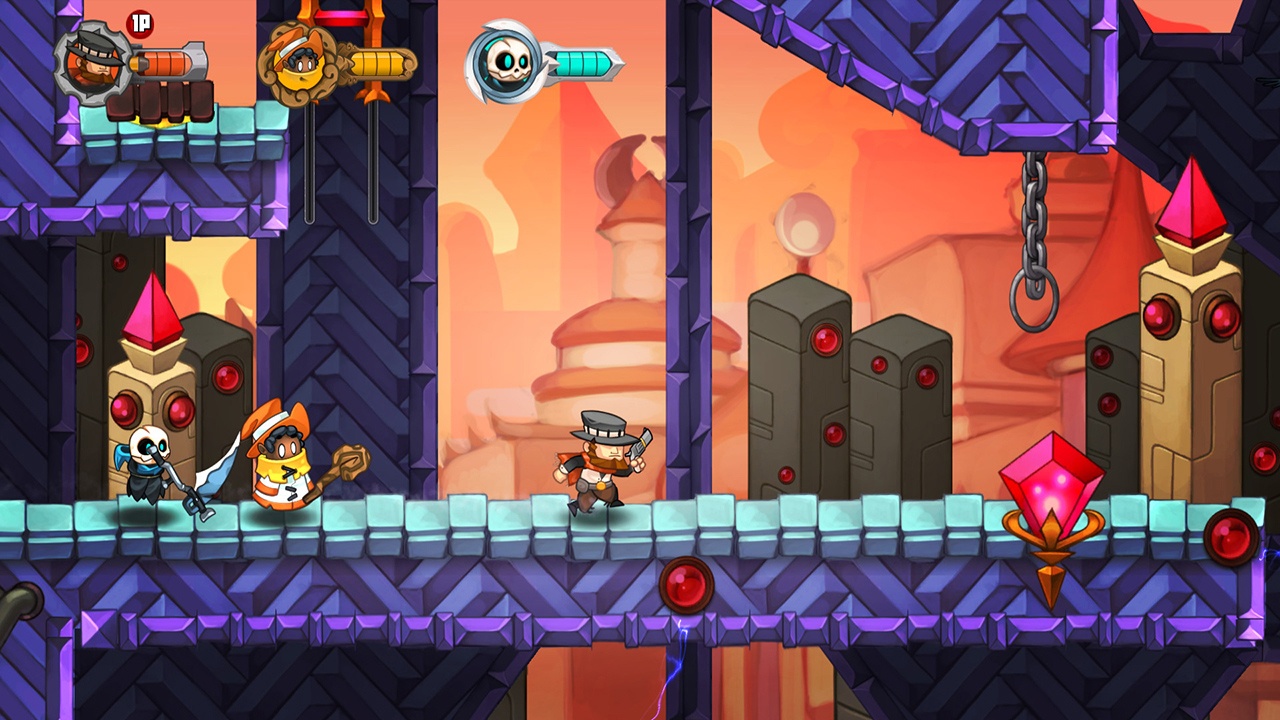 And, for the most part, it works. Each character has the same basic movements mapped out, but you need to toggle between them with the R button. What ends up happening is you quickly realize and can feel how much better things in Grave Danger would be going with a friend playing. You are in control of three characters almost immediately, and the R button only swaps one way, cycling in a particular direction. This means, even though there’s an active timer running on the levels, you need to pause between swaps to make sure you know who’ve you taken over this time: you’d hate to think you’re Elliot but actually be Malice and accidentally step into spikes like I did eight or a hundred times. Truth be told, even if you had a friend playing, you’d really want two: now having two different people fighting over who gets to be the third quickly makes things incredibly confusing, and the blinking cursor to indicate the players doesn’t matter a damn when you’re all standing in one place.

But there are some fallacies to Grave Danger that go beyond not having friends. The death mechanic, for example. In classics like The Lost Vikings, if a Viking died you’d be forced to reset the level because, well, Vikings travel together. Here, if you die, it’s not the end: but you do need to get your ghost back to the last graveyard you saw to respawn your body. This can result not only in the tedious and long backtrack (because your ghost is somehow still corporeal and can’t just go through locked doors) but will potentially reset a LOT of work since you now need to re-clear the area to get Elliot back to where he needs to be. This annoyance is actually amplified in co-op mode because you’re making a friend wait and then making a friend help your stupid ass back to where you belong. 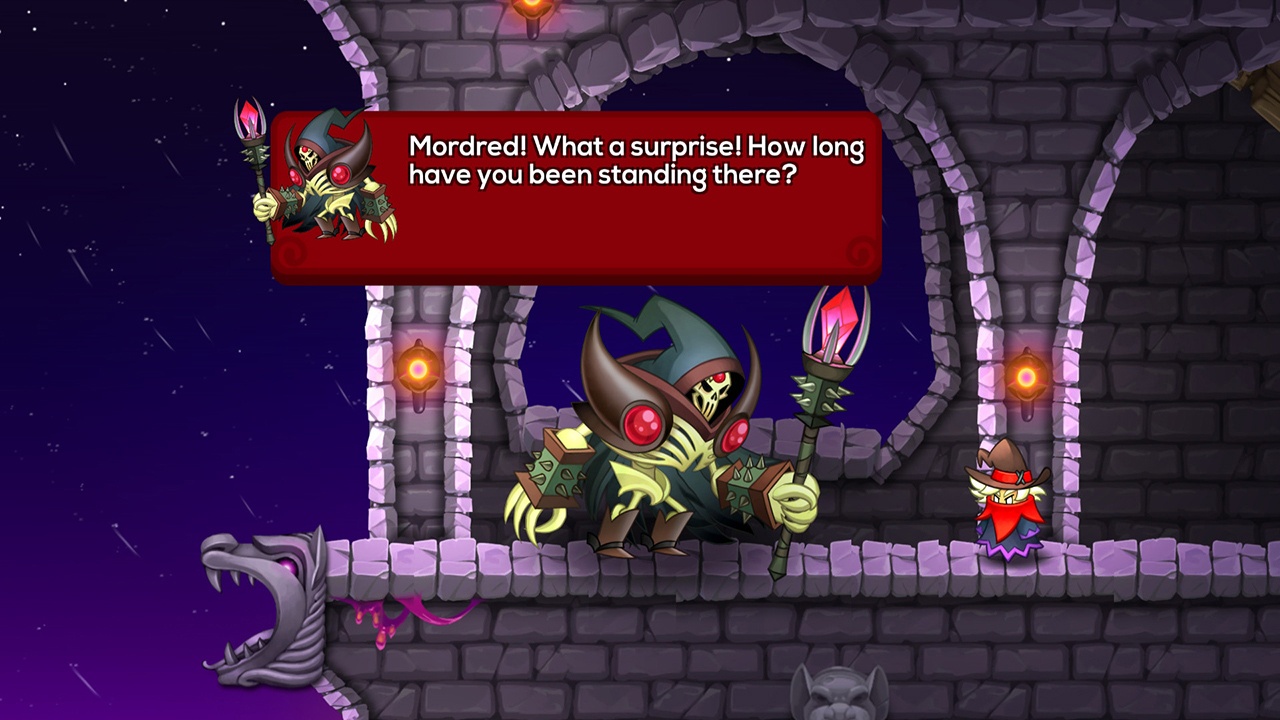 Additionally, the controls themselves. Now, I love the way that Grave Danger looks and works: the graphics are the right amount of cartoony and detailed, showing some real love from the creator. But an inherent drawback with this kind of style is that it makes the characters feel like marshmallows, sometimes horribly inaccurate and bouncy with their movements and responses. This is something that’s a bit annoying in regular action platformers, but it’s goddamn unforgivable in puzzle platformers. You need Dante to be swift and on target when it comes to getting between ledges. If you think he’s going to run out of dash power in the middle of a chasm, you’ll psyche yourself out and end up plummeting to your death and then trudging your zombie cowboy ass back to the last tombstone you saw.

Lastly, I feel bad for Grave Danger, because they promote the Switch version as the Ultimate Edition with a ton of new bells and whistles. These kind of great upgrades and updates only feel valid if the previous game was well-known enough for people to have demanded extra levels and expanded gameplay, and it just feels hollow for it to exist on a game that I hadn’t heard of prior to playing it here. Don’t get me wrong: a little bit of searching shows me that this version of the game is a big improvement from the previous, especially with how the co-op camera work is handled now. But I just feel like I can’t fully appreciate how far they’ve come when I don’t know where they started. Sorry guys.

But I did enjoy Grave Danger for the most part. The co-op puzzles were fun with friends and doable alone. The banter with the characters gave me a few chuckles, and I loved the art design all the way through. This is just definitely a game that’d I’d prefer to play with friends in a non-serious setting when we’re just looking to shoot the breeze and play something. If you’re a big co-op puzzle fan, this could be right up your alley. But, if you prefer to work alone, you may want to leave this gravestone unturned.