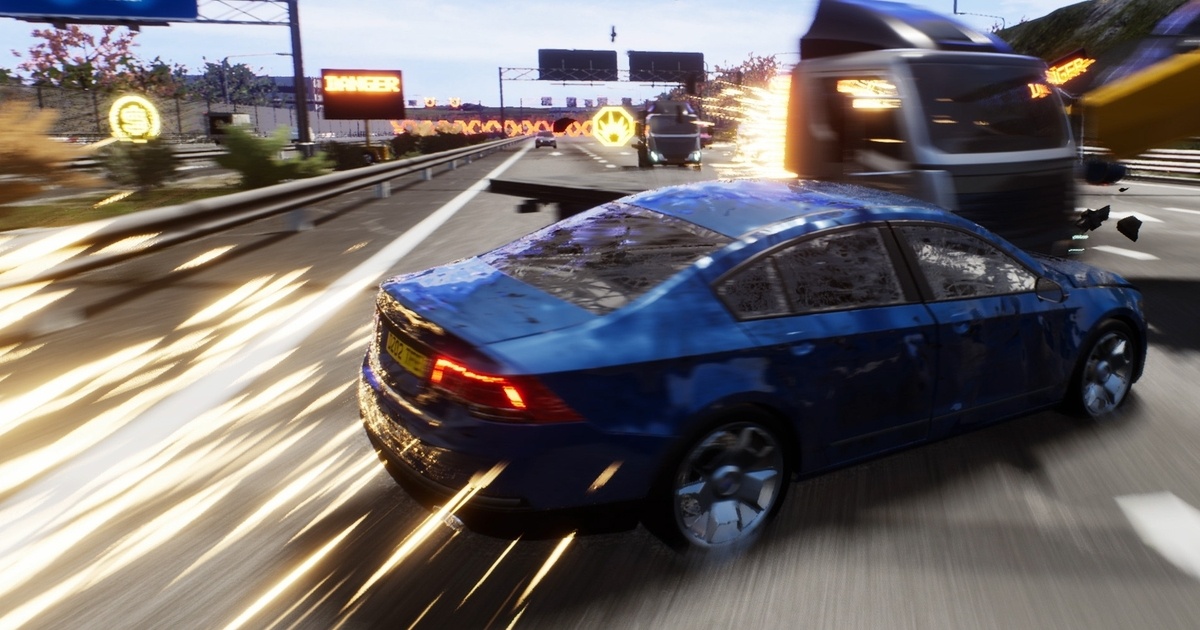 When Three Fields Entertainment had first come into life, I was incredibly excited. As after years of absolute silence, the ex-Burnout developers have finally resurfaced to form a new studio, and hopefully to create the spiritual successor to the EA owned Burnout franchise. However, the initial feeling of joy has been quickly overshadowed by slight sensation of disappointment, as Three Fields has announced that its first title is not going to be a racing game in the vain of Burnout, but a mini-golf title named Dangerous Golf, which while incorporating elements of the Burnout franchise, was largely underwhelming.

The critical and public reception of Dangerous Golf was rather lukewarm, to be generous. As for the most part, Dangerous Golf felt more like a tech demo, as it was rife with lacking within the visual department, and the gameplay was not all that engaging. However, the title in question did not sour the mood completely, as Dangerous Golf was meant to be a prelude to Three Fields big racing endeavor, for which we have all been waiting for. But unfortunately, Three Fields Entertainment’s racing effort, Danger Zone, was just as underwhelming as the previously released Danger Golf. However, this did not deter Three Fields from pressing forwards, as the UK-based developer has just released Danger Zone 2, a direct sequel to the original.

Danger Zone 2, while relying on the exact same mechanics as the original, has stepped away from the simulation-like environment, and has brought the vehicular carnage to a photo realistic environment. And while the change of the setting will be welcomed by most, then it has to be said that it is not as complex and fleshed out as most would like it to be. And that’s because the in-game environments, are mostly composed of bland and uninviting motorways, which are at times decorated with a handful of flat and morose looking buildings, and equally underwhelming flora which litters some of the in-game tracks. 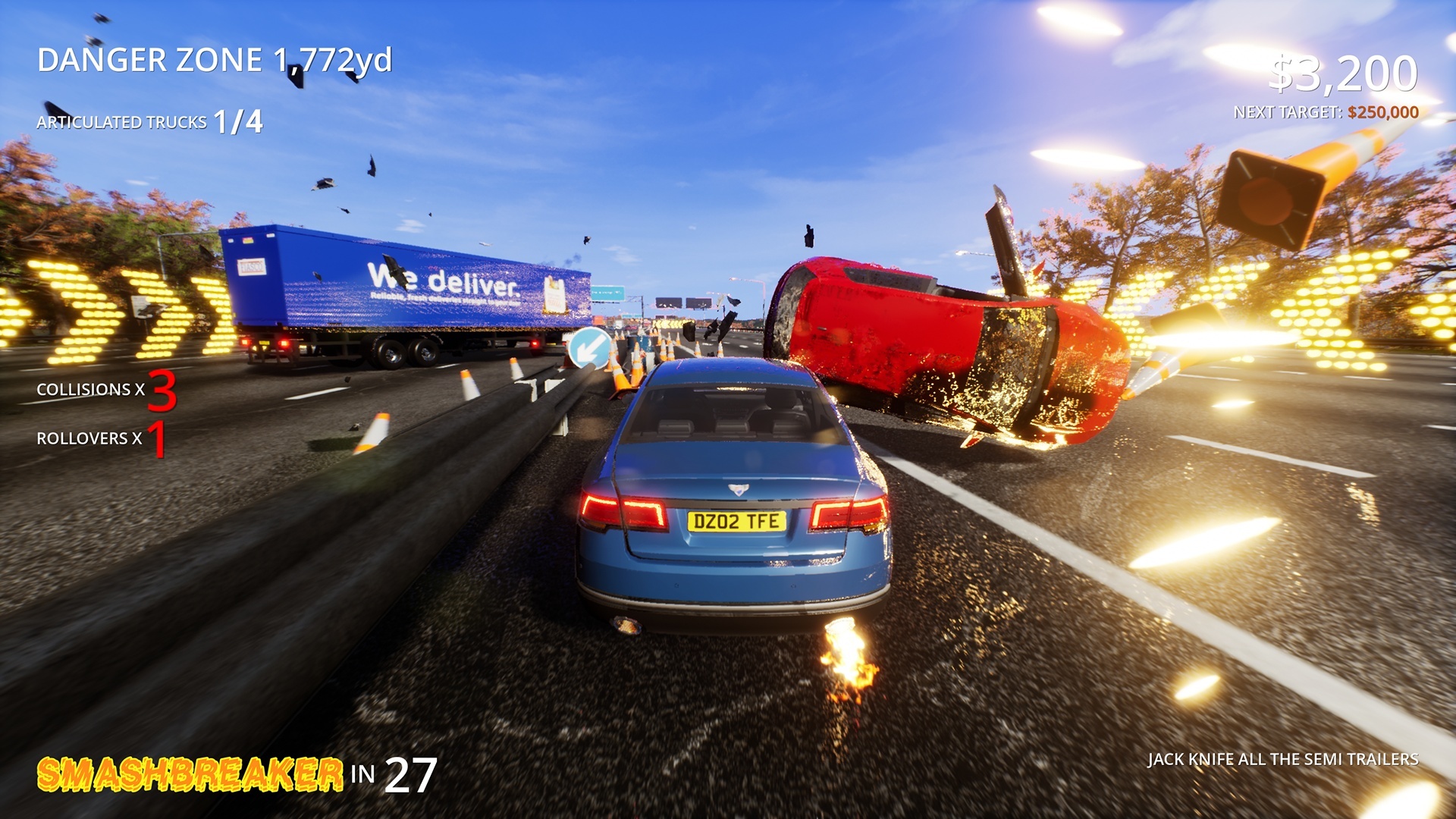 Any of the Three Fields’ projects will never achieve the level of polish and quality of the AAA titles on which the now downsized team has worked on in the past. As the studio in question simply lacks funds and manpower to achieve AAA quality within an indie title. However, even in comparison to other modern photo-realistic indies, Danger Zone 2 is ironically enough lagging behind, and some, such as the recently released Asemblance sequel, are close to lapping it. And that’s not necessarily because other studios are bigger, but because they create much more cohesive, and compact projects, which are simply easier to manage. And if Danger Zone 2, was a title based within a small, Surf Island-like environment, then without shadow of a doubt, it would have been much more attractive to one’s eye, as well as the mind.

The biggest issue with Danger Zone 2 doesn’t stem from the fact that it is a not an attractive game, but because it feels and plays like a messy tech demo which has been butchered into small parts, and cobbled back together into a rather underwhelming game. And while the title is constantly trying to hold your attention hostage, through run-up challenges, then those are equally as uninteresting as the remainder of the title, and in the end seem like a desperate attempt at trying to salvage the already sinking ship of the Danger Zone series. And while such state of affairs for most who will decide to pay the rather steep asking price of £15.99, is rather saddening, then it has to be said that it is absolutely soul-crushing for those who were expecting Danger Zone 2 to be the next Burnout. 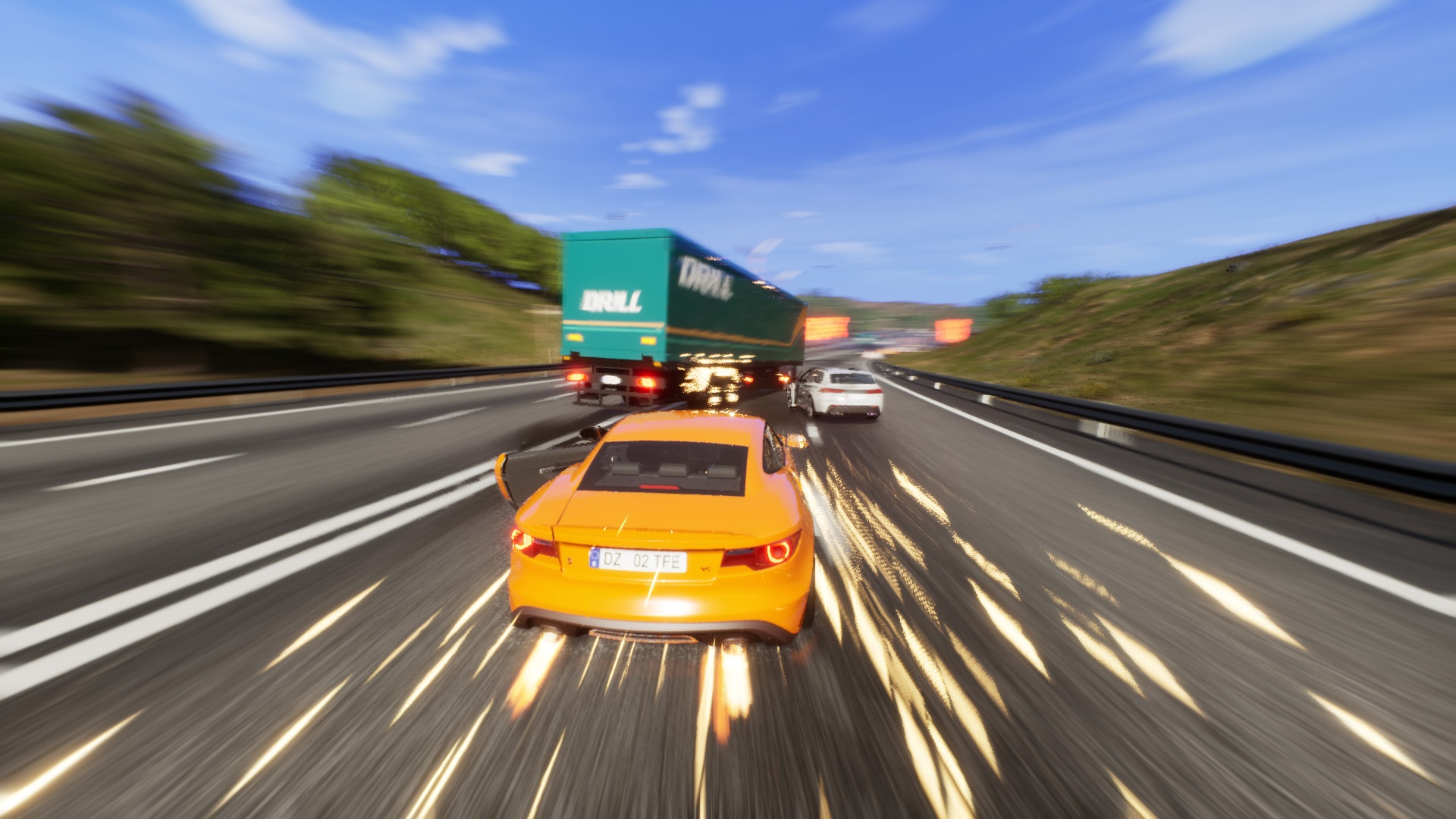 Danger Zone 2, while sporting a new setting, and a set of never seen before tracks, feels just like a re-skin of the original, as it brings forth all the flaws which have marred the original Danger Zone. And Danger Zone 2 is the game that is either because Three Fields Entertainment didn’t listen to the complaints aimed at the original, or because the developer in question has simply seen them as false criticism and proceeded to develop a title as drab and as mundane, as both the games which have preceded it. And personally, I don’t know which option is much more disappointing. But considering that Three Fields has completely reworked the visuals, which many have disliked within the original, it seems like the studio has decided to completely disregard the vast majority of the complaints and criticism made by the public as well as the media.

Three Field’s Danger Zone 2 may be a new released, but is the same disappointing and mundane title, which is on par with other sub-par works of Three Field Entertainment’s portfolio. And while I would like to attribute the title’s most jarring, and damaging flaws to game design decisions made by the developer, then I have to say that those most likely stem from general lack of effort, on the part of the studio. As the general execution of the title is overall lacking, and large portions of the title feel like they are just a place holder, as the entirety of Danger Zone 2’s UI and HUD, boils down to plain white text, which even puts to shame some of the monstrosities of Steam Green Light.

To conclude, all that really has to be said about Danger Zone 2 is that it is simply not worth its current asking price, as Three Fields is asking you to pay premium for a title which many developers would not dare to charge more than £7.99. The general lack of quality, and any form of cohesive and satisfying game design ultimately renders Danger Zone 2 unnecessary, as there are simply better games on the market, which can be purchased for much less. And if you somehow don’t believe my assessment, then you are free to find out for yourself, but give it a week or two, as Danger Zone 2 is bound to plummet in price within the foreseeable future – just like all the previous games developed by Three Fields.