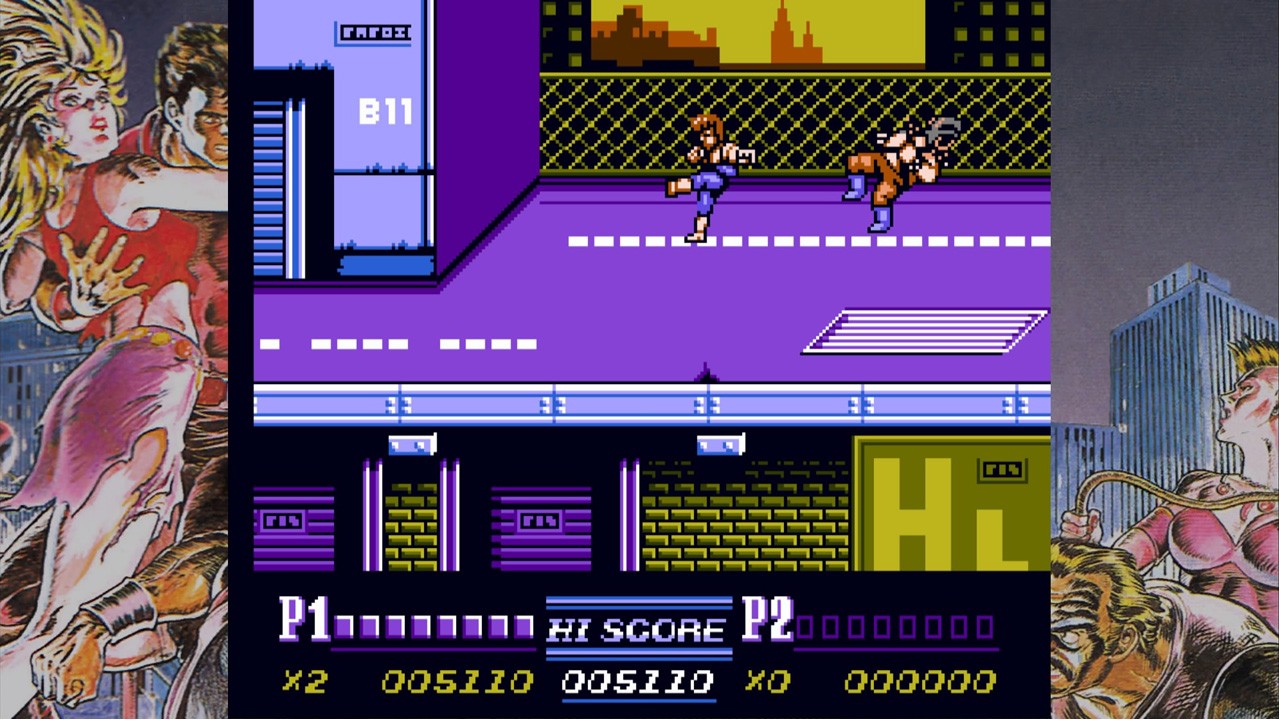 The Nintendo switch is no stranger to retro remakes or ports, either through singular titles or compilation packages. Heck, it even has an online service for subscribers to indulge themselves in a series of NES and SNES (or Famicom) titles. The online service asides though, the majority of retro bundles that have become available for the Switch often revolve around a specific genre, such as Shmups or the odd RPG. However, despite its title, Arc System Works’ Double Dragon & Kunio-Kun Retro Brawler Bundle holds a lot more variation than its title suggests. Sure, it’s got brawlers, but it’s also got a lot more besides, creating a varied selection of retro delights as it punches a release onto the Nintendo Switch.

As a package, this collection of retro games comprises of eighteen NES and SNES titles overall; some of them covering the best known arcade brawlers of their time, as well as a selection of other games that have never seen a Western release until now. We’ll start off though with the instantly recognisable Double Dragon series of games from within the title. Within this collection, we are treated to the complete trilogy with Double Dragon (1987), Double Dragon II (1988) and Double Dragon III: The Sacred Stones (1990). Each of these titles are ports of their original NES releases and whilst I hear you screaming that the first two titles are part of Nintendo’s Online subscription service, this collection of games within this particular release holds a lot more than first meets the eye.

This is largely due to the Double Dragon & Kunio-Kun Retro Brawler Bundle containing a series of options and improvements that display these games in a new light. These range from a choice of playing the games in their original formats or enhanced editions, which adds some technical improvements such as bug fixes and flicker-free presentations. Whilst some may prefer to keep things original, the technical enhancements here do give the games a better feel overall; one that retains a retro coolness fit for the 2020s. You can also adjust screen ratios, including a full-screen option that looks wonderful when playing handheld. On top of this though, where-ever applicable, you can also play these titles in local co-op and online for up to four players. 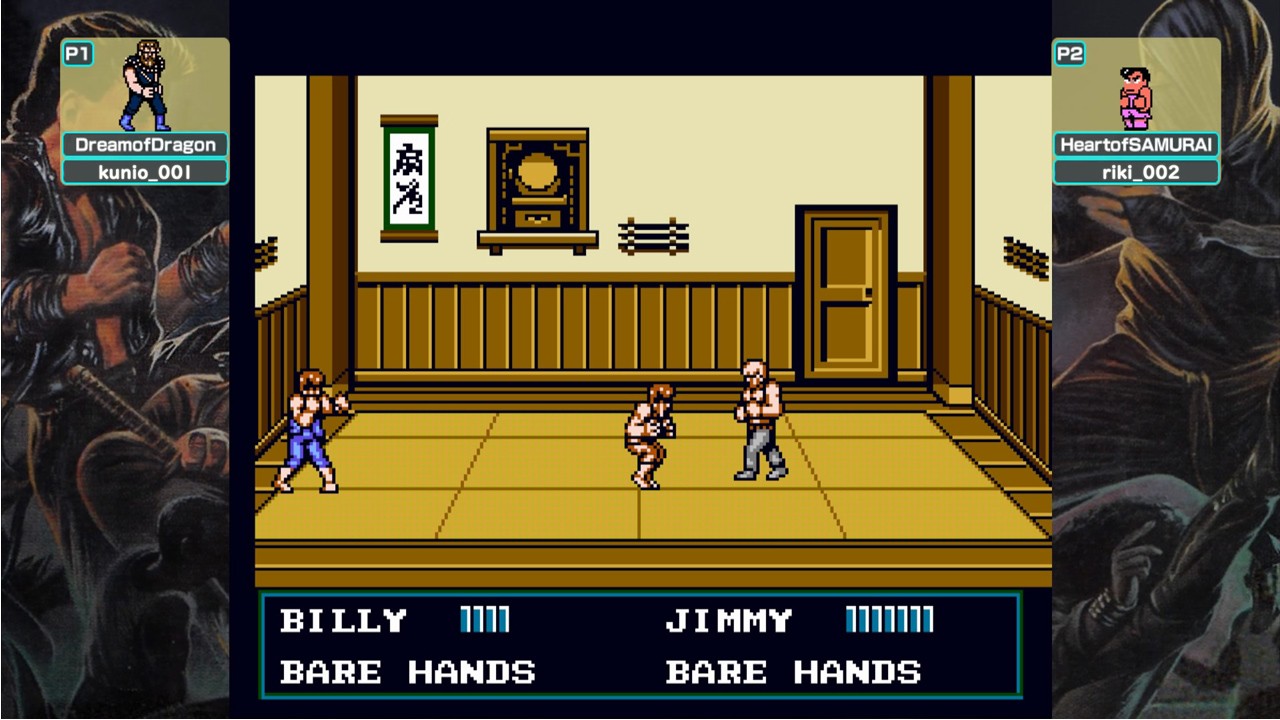 It’s within all of these elements that this Double Dragon collection of games simply outshines its online subscription counterparts in every way. In terms of gameplay, which I won’t delve into too much, this street-fighting brawler retains everything that has made this series one of the most famous and recognisable retro titles to date. To complement these game further though, this compilation also comes with a series of other similar titles; all of which are just as instantly recognisable within their genre. Firstly, we have Renegade (1986), followed by River City Ransom (1989), Crash’n the Boys Street Challenge (1992) and Super Dodge Ball (1988). As with the Double Dragon games, both River City Ransom and Super Dodge Ball can be found within the Switch’s online subscription service, but as before, they play, feel and look significantly better here.

Although brawlers by nature, these other titles add a touch of variety to their gameplay, from River City’s role-playing elements to Crash’n the Boys’ event-style gameplay with hurdles races and roof-top jumping. Whilst its easy to say that some of these haven’t withstood the test of time particularly well, the technical improvements given to these games have produced a much more playable and enjoyable state in which to experience them; especially when playing online with three other randoms to create a hectic four-player brawler. It really does bring out the true ‘arcade-feel’ associated with these games, even though they are merely ports of their original arcade counterparts.

The eleven remaining titles of the Kunio-Kun series have never seen a release on Western Shores; although one or two were repackaged under different names. Saying that though, it’s here where you’ll find some of this collections brightest gems, as well as a variation from the ‘Brawler’ theme that this collection is entitled. However, it should also be mentioned that some of these titles are simply ‘Japanese’ versions of other games within this collection. For instance, Nekketsu Renegade Kunio-Kun is simply Renegade and Nekketsu High School Dodgeball Club is Super Dodge Ball. Although it sort of makes them irrelevant within the collection, it’s still nice to have them included and, in some ways, does make it a more complete and definitive collection; especially if you’re a collector of retro arcade games. 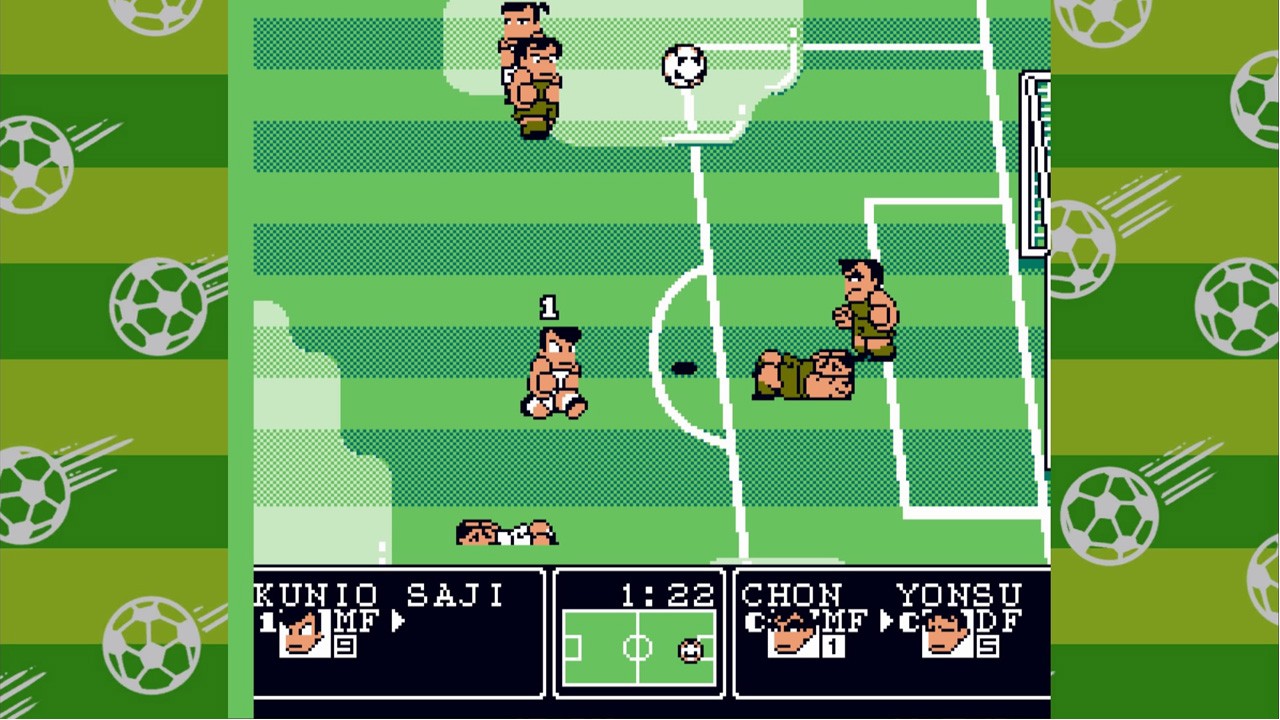 The other remaining games offer some nice additions to the collection though and more than make up for the similar versions of the previous games; especially with some never-before-seen sequels and Japanese re-brands from Western releases. For instance, Nekketsu High School Dodgeball Club – Soccer Story saw a Western release under the guise of Nintendo World Cup, Nekketsu March Super-Awesome Field Day! is a follow up to Crash’n the Boys, Downtown Special Kunio-Kun’s Historical Period Drama! is a sequel to River City Ransom and Kunio-Kun’s Nekketsu Soccer League is a follow up to Soccer Story. The other titles remaining in this collection include Downtown Nekketsu Story, Go-Go! Nekketsu Hockey Club Slip-and-Slide Madness, Surprise! Nekketsu New Records! The Distant Gold Medal, Nekketsu Fighting Legend and Nekketsu Street Basketball All-Out Dunk Heroes.

It’s clear to see from these titles this collection offers a variety of games, from the brawling of Double Dragon, River City Ransom, Renegade and Nekketsu Fighting Legend to more sports-based games, such as Super Dodge Ball, Kunio-Kun’s Nekketsu Soccer League, Nekketsu Hockey Club Slip-and-Slide Madness and Nekketsu Street Basketball All-Out Dunk Heroes. Although they all contain some form of a ‘Brawl’ mechanic, these all play in an infinitely different way to the other ‘all-out’ brawlers that are available here. Covering sports such as Soccer, Basketball and Ice hockey, they offer a nice variation from the collections central theme and, in many cases, are some of the most playable games on offer here. My personal favourites being Soccer League and Hockey Club; both of which are instantly playable and offer extreme amounts of fun.

Overall, Double Dragon & Kunio-Kun Retro Brawler Bundle offers one of the most diverse and playable collections of retro games that I have ever come across. It holds a plethora of instantly recognisable and famous titles from the arcades of yesteryear, as well as a beautiful collection of never-before-seen titles of the NES and SNES eras on Western shores. It’s all wonderfully presented too, with an unprecedented number of options, in-game achievements that offers rewards and a multiplayer component that allows both local and online play. Their ‘enhanced’ versions also offer the most ‘up-to-date’ experiences that you can have with these games; often propelling them to a higher state that retains their level of playability that was so predominant upon their original releases. If you love retro gaming and, in particular, retro brawlers, then you really owe it to yourself to add this game to your library.

If you love retro gaming and, in particular, retro brawlers, then you really owe it to yourself to add the Double Dragon & Kunio-Kun Retro Brawler Bundle to your library.