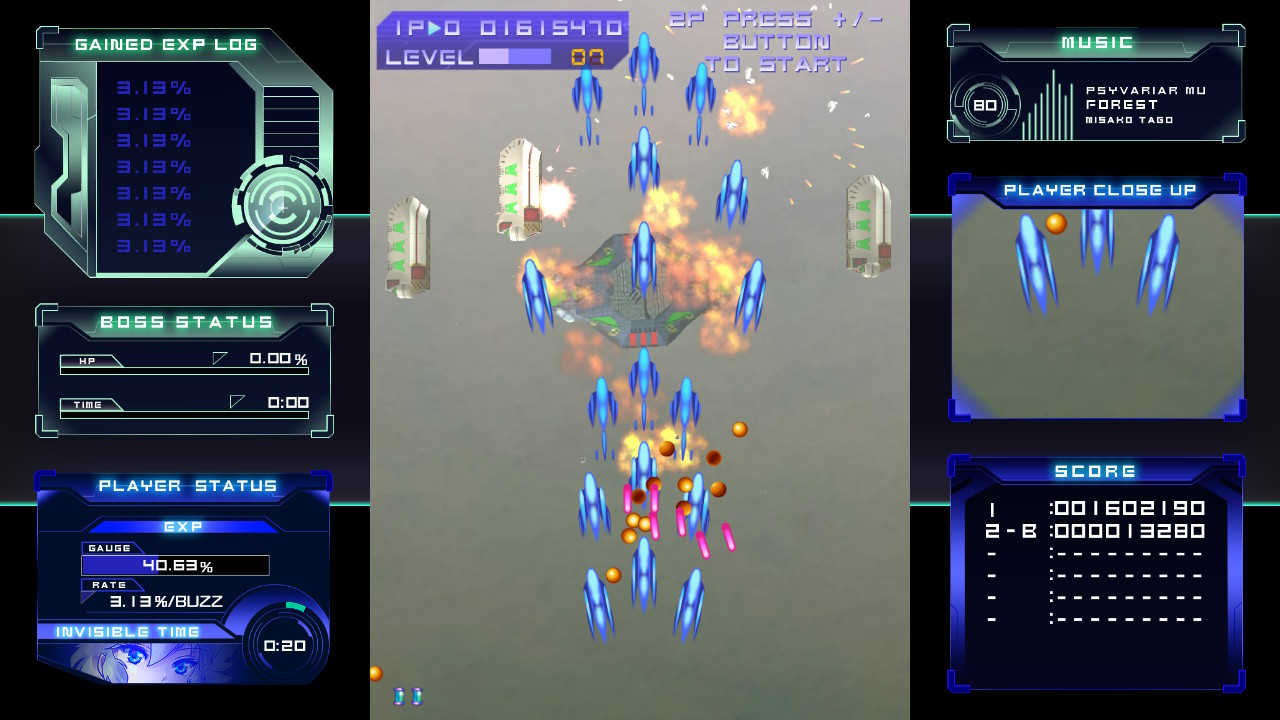 It’s a great idea to keep releasing games that used to be popular, or even remotely popular but perhaps widely unnoticed, onto new consoles. Remaking and re-releasing older games is, technically, better than making sequels that everyone hates or bemoans, though original ideas are still the best overall. However, I think there’s something to be said for making sure an old idea still brings something new to the table. For example, when Nintendo will bring Link’s Awakening to the Switch in a couple of months, it’s a brand new art style, brand new engine, and, oh yea, the original got a face lift back in 1999 and not much since then. So, for City Connection and SUCCESS Corp, it wasn’t enough just to dig up Psyvariar and bring it to the modern console after languishing on the PS2. They wanted to take everything that Psyvariar was, infuse an additional element, and bring the whole damn package to players with the brand new Psyvariar Delta.

Psyvariar Delta represents the culmination of several iterations of the original Psyvariar vertical shmup game. For those who are unaware, Psyvariar originally came out under the name Psyvariar: Medium Unit, and then later got a technical facelift (as well as a small graphical improvement) with Psyvariar: Revision, and then BOTH versions got packaged together with Psyvariar: Complete Edition. Psyvariar Delta takes all of the previously published stuff and adds in a few extra goodies, such as two player mode, additional ships models, new enemy models and new background music. This is where things get a little murky, so let’s lay it out flat. The game will always perform the same, as the technical aspects of rolling, grazing and the invisibility mode are carryovers from the Revision mode and are the preferred method of play, so that’s where it is. However, you can choose which ship you want (and which pilot you want), what kind of music from each of the three versions, and what kind of enemy ships you’ll see. It’s a real mix-and-match deal that still leaves you with the same game in the end. Make sense? Good. 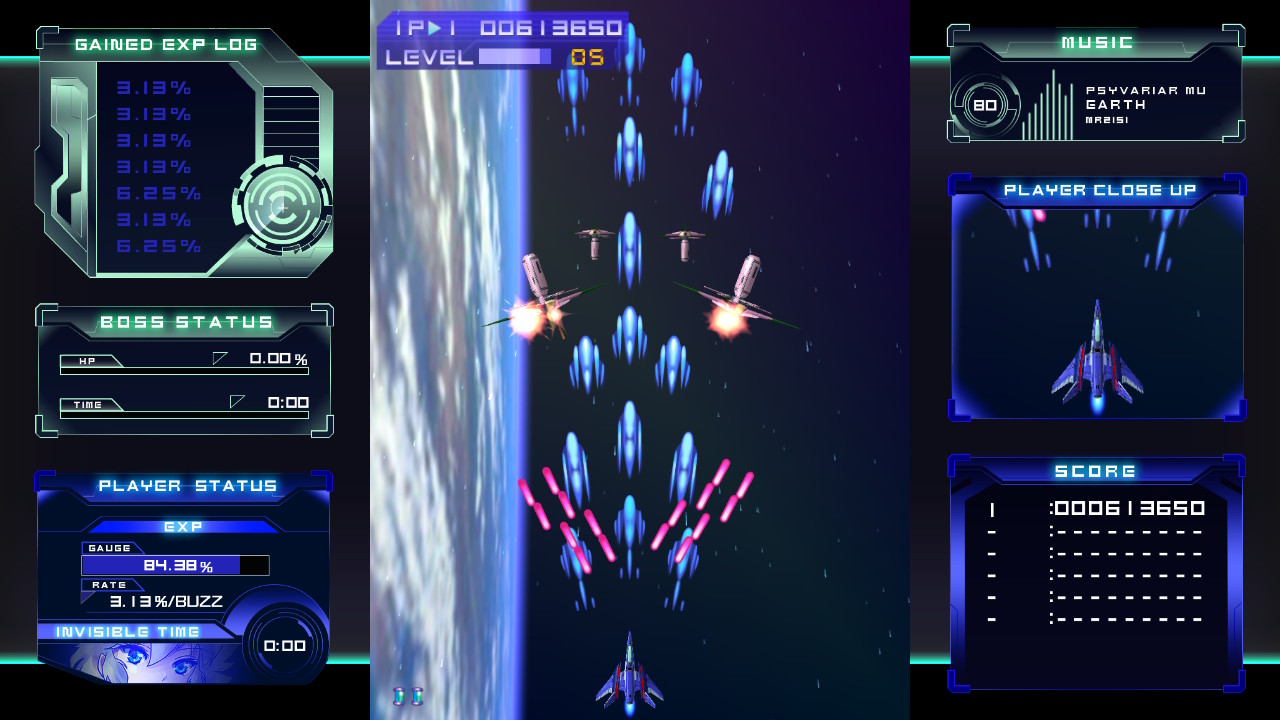 Without a real plot to speak of (aliens! Shoot them, I guess), Psyvariar Delta has to keep itself afloat with the gameplay and reputation that precedes it, and it’s a doozy of a step to embark upon. From the terms that you read above, you can gather that Psyvariar is a vertical shmup that really focuses on making sure you’re in the thick of the bullet hell atmosphere, not just for difficulty challenge but also for the purpose of growing stronger. “Grazing”, or being uncomfortably close to the enemy bullets without getting hit, isn’t just a way to generate a huge number of points, but it’s also the way to level up your ship, making your EXP climb and watching your weapons increase in power, spread and succession as your level grows. There are no powerups to speak of or to find: there’s your standard weapon, and you might, occasionally, get another screen-clearing bomb if you’re lucky and stay alive long enough to earn one. This is done by the method of rolling, which is rocking your joystick quickly from side-to-side to activate a barrel roll in mid air. When you’re at a lower level (or using a ship from the Medium era), the rolling doesn’t seem to help as much, but the speed boost from the roll is apparent the higher you get. That’s your pamphlet on Psyvariar: almost get hit but don’t, and roll around a lot.

Once you’re in the game, it’s easy to see the appeal of Psyvariar Delta, especially in this newest iteration. Everything that explodes onto the screen is a symphony of color, light and sound. The alien ships are well designed across each iteration, everyone of them bringing unique spread patterns, flight methods and final attacks when cornered. You have to keep moving and keep your fingers flexible as you jet around the screen, but you also need to keep yourself in check and make sure you know exactly where you are at all times so you can efficiently build up your graze EXP. The additional camera angle on the right hand side serves as a close-up camera to show you, in real time, just how close each and every bullet is that comes near you. I found the additional camera interesting and sometimes helpful, but often distracting because I’m more of a big picture person and less of a minute detail analyzer. However, I can easily see that players seeking to achieve the strongest high score, either in the traditional game, time attack or score attack will probably stay glued to that camera to see exactly where they are. It’s a hit box enthusiast’s dream and nightmare all rolled into one, as you really need that additional camera to see just how ridiculously close every single shot becomes. 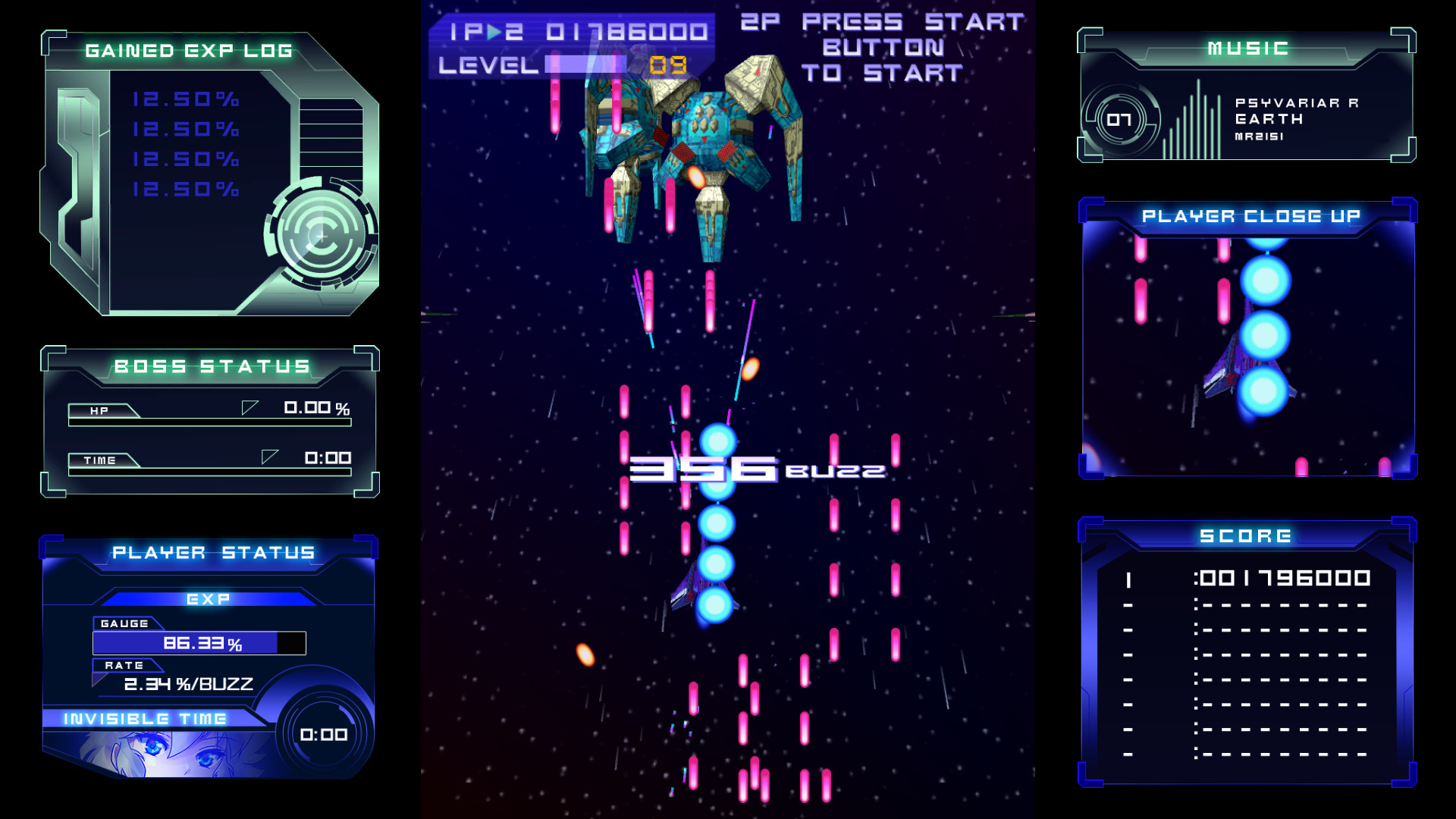 Like all good shmups, you can play through Psyvariar Delta’s main story in about twenty minutes or less, but that lets you appreciate and see how finely designed every single stage is within this beautiful bullet hell. With different levels to choose from as you ascend in the story line, you’re able to create your own pathway, launching from the opening stage and then deciding whether to head to the jungle world or another planet, losing yourself in an asteroid field and coming out the other side, and finally culminating to massive bosses that have unique bullet patterns and positively no remorse for the agony they put you through. The whole time, you start to understand the importance of the roll, of staying a twirling, elegant death machine that weaves between bullet fields and praying that you hit the level up at just the right time to activate an invincibility moment, or if you need to risk using a bomb to try and give yourself breathing room. When the game is on easy, even the later stages feel very comfortable and fluid, despite the hail of energy lances, and the use of unlimited continues can be abused ad nauseam until you’ve gotten all the way to the end and see the frankly underwhelming (at least visually) final boss. When it’s on hard…well, be ready, keep your fingers loose, and don’t throw your Switch. It’s easy to throw your Switch. Don’t do it.

Lastly, I do want to mention I absolutely adored each and every soundtrack selection available for Psyvariar Delta. There’s something about great shmup music that really keeps me laser focused and in the right mindset for almost anything, and there’s this electronic ambience and flow in Psyvariar Delta’s BGM that puts you right where you need to be. Interlaced with what feels like trance and techno from the late 90s combined with modern loop and beat creations, Psyvariar encourages you to keep headphones on and to forget about the world around you as you drift into a total zone of survival, firepower and split-second decisions. Oh, and, if you’re playing in vertical mode (thanks Flip Grip!), you lose the additional screen but gain the feeling of totally being in the perfect shooter realm for 15 minutes at a time, headphones in, full viewing window and nothing else to distract you.

If you’re already a massive fan of shmups, Psyvariar Delta should be a no-brainer to add to your collection, especially with this fully formed, gorgeous package that can be gotten physically, as well as digitally. If you dislike bullet hell shooters, this one isn’t quite at Touhou level, but it still demands a lot out of you, is totally lacking in plot (I guess aliens?) and is technically quite short in comparison to other games. But I loved the life out of this thing, and it sits comfortably beside Ikaruga and Image Fight as one of the best shooters on the Switch, hands down.

Psyvariar Delta does fans right by bringing everything to the table from the previous versions of this game and adding a bit more visually and aurally.