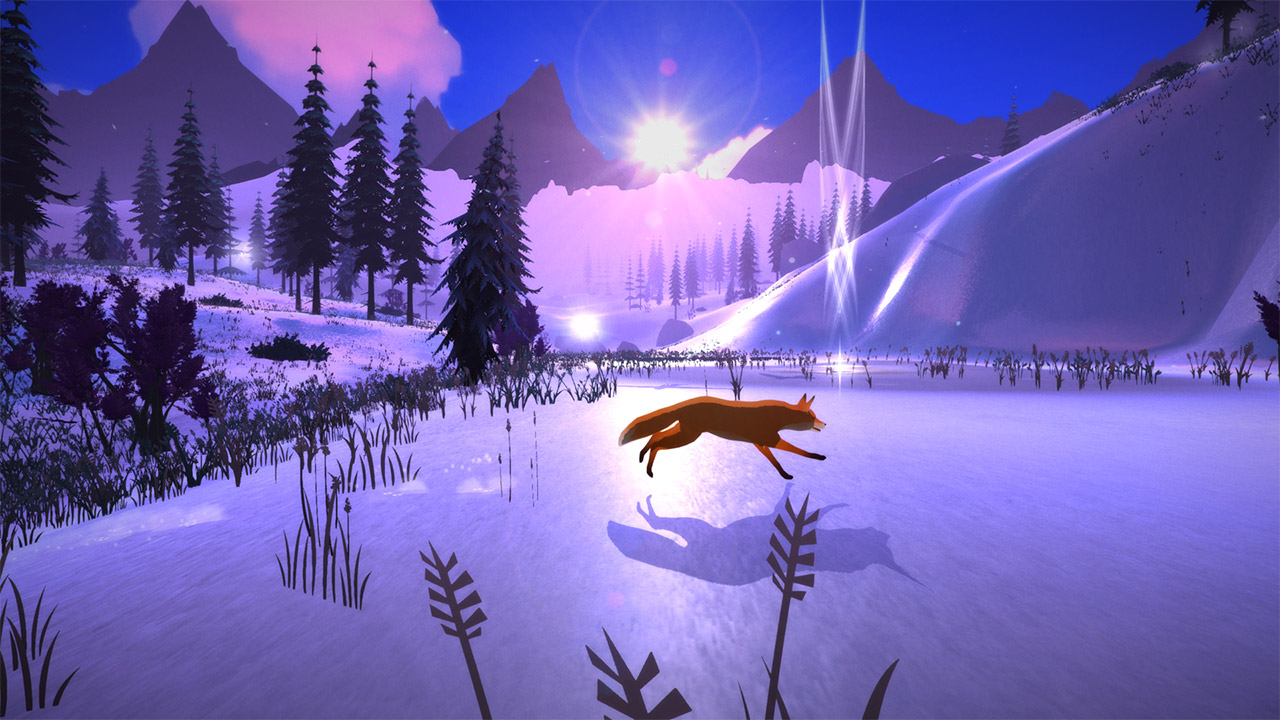 Parents and children always have complicated relationships, but there is a really special place in my heart for the father and son dynamic. For generation after generation, there are complex emotions that come into place as a boy goes from a child to an adult, and he views the man in his life through a series of lenses. For those of us fortunate enough to grow up with a dad in the picture, it can sometimes be an almost embarrassingly diverse picture that’s painted, interweaving elements of hero-worship, embarrassment, rebellion and understanding over the course of years, if not decades. These ideas are at the core to the unbelievably raw and honest journey of one developer in The First Tree.

Awakening from a dream, a man finds that his mind is full of thoughts about what he just slumbered upon, as well as upwelling memories of his childhood, and, most importantly, his father. The game, therefore, is from the perspective of watching the dream the man had just had, in which a fox has discovered her dead kit. Fearing for her other children, she sets off to find them across a vast, turbulent and ever-changing landscape, encompassing multiple elements and even realities on a journey somewhere. As she travels, it becomes clear this dream is heavily influenced by the disquiet inside the man’s psyche: the world is littered with detritus that echo his connections and artifacts of the past. Slowly, we hear the man, his wife, and their lives together unfold, as we examine the past and unpack our burdens to help, hopefully, shape a better future.

The First Tree is, unabashedly, a walking simulator, so let’s make that crystal clear from the get-go. As a 3rd party observer to the fox, your job is to travel around and follow certain light wellsprings that bring you to loose patches of dirt. Upon digging these up, you’ll find an object that will trigger another dialogue sequence in the real world, which then plays out, unhurried, as moments are discussed and examined as best two people can in the middle of the night. There are also tiny star pieces scattered throughout the five levels, which can be collected to satisfy the completionist in you and also ensure you find all the hidden “moments” that are in the game as well. Throughout the course of the game, you’ll have to run, jump, explore and sometimes use interesting mechanics in order to fully progress through the game and receive the whole story, including a bit of an epilogue. 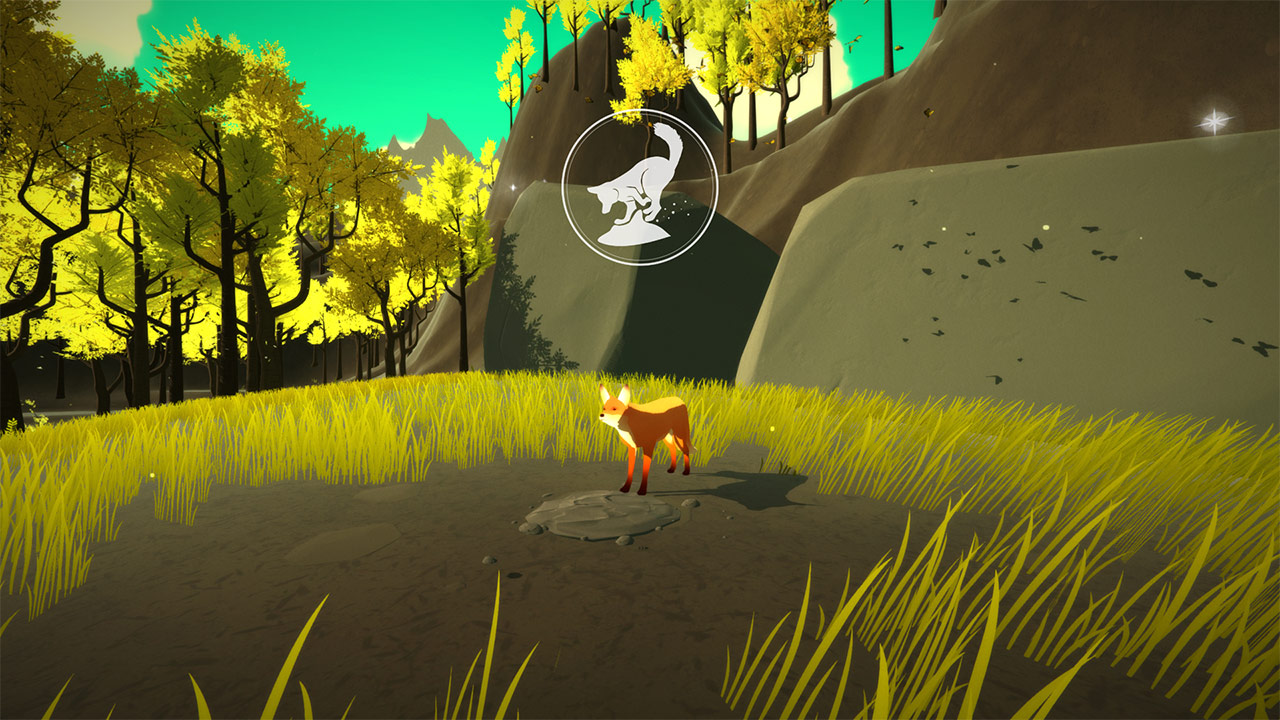 The First Tree ranks on three different levels: story, soundtrack, and gameplay. I don’t really feel the need to grade the graphics as much because it seems like those are important in terms of framing, but not so much in terms of delivery. That is to say, in an age where shockingly realistic 3D images can be used in the quickest of Steam asset flips, The First Tree errs more on a simpler side. That’s not to say the game isn’t great to look at, far from it. The vastness of the worlds, and the strangely tranquil emptiness of world four help to better paint a picture for both what the dream is/was like and how these all tie into the narrator’s experiences. For me, however, the graphics were sitting fourth in comparison to the importance of the three aforementioned points.

If you’re looking for a game with story and heart, then you’re set, full and unabashedly. The First Tree has almost heartbreaking moments of exposition, self-analysis and incredibly human exchanges between the husband and wife. Though both admit there are parts of their childhood they’re dissatisfied with (both the man’s behavior and the wife’s home life), neither feels like they’re trying to out-do one another. Instead, we have a story that is, from my perspective, intimately relatable, despite having never been to Alaska a day in my life. Hearing the transition from holding your father in an almost deity-like position to being shamed by other people for having a more “rural” home is something that struck a chord in me heavily. Then to move into the angsty teenage years, trying to fight and rebel when there wasn’t necessarily a proper outlet, to slinging words and destroying whatever you could to satisfy the anger inside is another familiarity. But especially the later moments, when the narrator becomes an adult and starts to understand more about his father and his sacrifices…this is something every child, regardless, will come to accept. Our parents weren’t perfect, some were less perfect than others. But we have to believe, with some exceptions, that they tried the best they could, and wanted the best for us, and bore the slings and arrows of outrage and contempt the best they could. Then to see your own life unfolding and questioning choices, futures, potential, and even hope is horrifically familiar. This game does it’s best to get under the metaphorical skin of the 30 something who feels uncertain of the future and their own life and, by God, it does a fantastic job.

The soundtrack, in addition, sets up and helps to best frame the atmosphere and ideology of the story. Far from being a continual note in the background, there are long stretches of the game where music will disappear completely, leaving you and the fox alone with your own thoughts, both about the story at hand and your own personal tale outside of the game. When you stumble across the right triggers – a new memory, cresting a mountain to a new landscape – the piano and strings come in, plucking at your heartstrings and delivering another level to what you’re already dealing with. There will be no upbeat, driving moments or quirky tunes here. The happiest the music ever reaches is “melancholy” and almost everything is painted in tones of wistful, somber and downright sad. This is not a soundtrack that you’ll be putting on your iPod for everyday activities unless your job is one that you’re planning to quit as soon as humanly possible. Let’s be clear: it’s gorgeous, and I loved it, but damn it can be heavy. 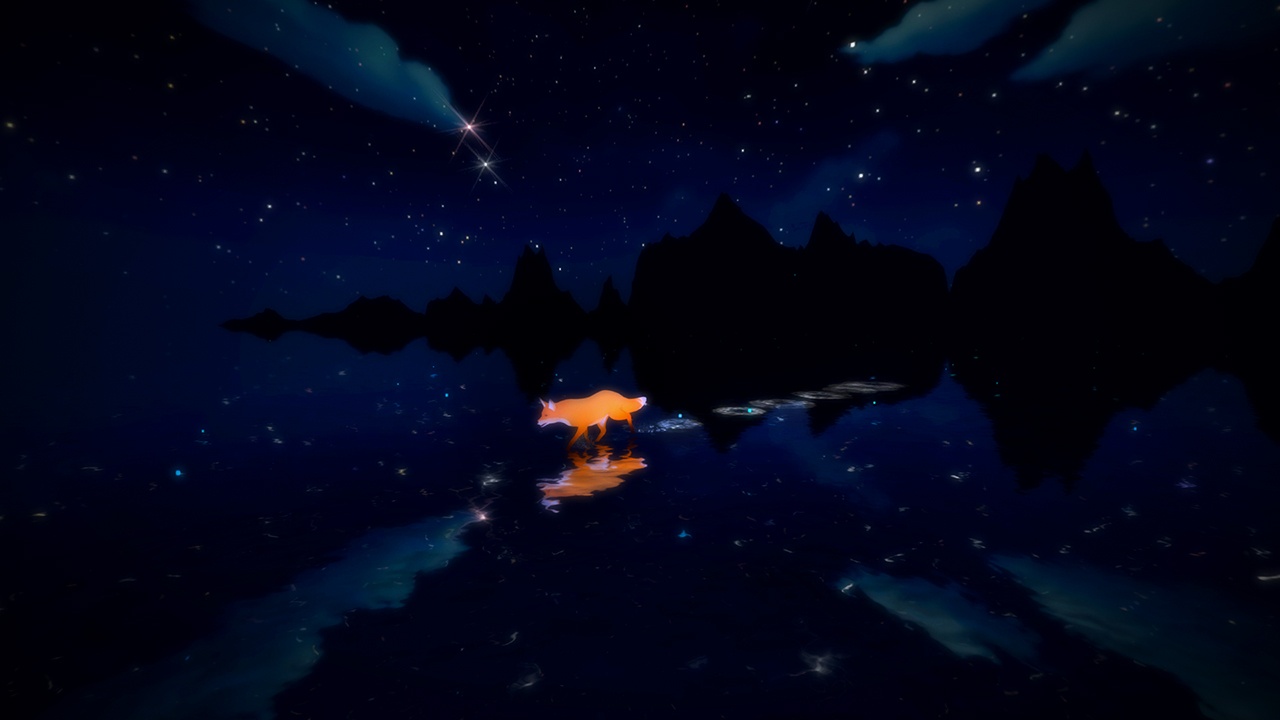 Now, unfortunately, the crux of any video game, the gameplay, is something condemning about The First Tree. As a walking simulator, you’re expected to take the time to explore your own mental depths in order to best appreciate the game at hand. That’s all well and fine, but the problem is that the walk itself is a bit disjointed. For example, at the very beginning, I decided to immediately veer off the main path and start walking left to see what there was to see. Turns out, in this case, there was nothing. I eventually hit an invisible wall and needed to backtrack a considerable amount to get back on the main path and the plot. That’s a caveat that’s often difficult to grapple with: the developer wants you to explore and find the secrets of the game, but only when it’s the right time to explore. Otherwise, stick to the script, it’ll be easier.

Additionally, the way the game is set up is all about timing. When you trigger a memory to start a dialogue, you’ll have a very long walk until you hit the next memory, so plenty of time to digest it and hear everything in its entirety. This works out surprisingly well, as long as you keep to the expected route within reason. If you ever feel like the game goes too long with silence, take a moment and turn on commentary mode: it’s incredibly interesting to hear and to have as added goalposts throughout the map. Best of all, the commentary mode is done much better than most games that added this option. The commentaries stack, waiting patiently for other things to finish talking before starting up, and that includes normal gameplay discoveries. My personal favorite is a strangely relatable story about fox farts, but feel free to pick your own.

The rub in it all, however, is that The First Tree is sadly buggy. For a lot of the time, when you’re simply running, things couldn’t be better. However, it’s clear that the story and appearance, both visually and aurally, came first, and the “game” came second. My fox got stuck under a slide early on in the game, and I needed to start over, a serious pain because the checkpoint system restarts you at the beginning of a level, not from the last memory you found. In addition, jumping can sometimes freak out, keeping you from achieving heights or propelling you MUCH higher than you should have. The developer sent a note saying that the triple jump of world two would be fixed in an incoming patch, and, in theory, you need the triple jump to get over a giant rock and move onto world three. However, after a few tries, I found I could basically wall hack the right points and made it over without collecting the necessary butterflies, which is good since the butterflies don’t currently work. Again, for folks who are totally onboard with the story, these moments won’t matter, but for folk who are “playing” the game it can be utterly, crazily frustrating.

Overall, I would give a strong, positive recommendation to The First Tree. Things like buggy movement and clipped walls can be easily fixed (and, again, patches are incoming almost immediately after launch). But you can’t go back and insert a real story or stronger emotions without overhauling a game completely. Those two things are present and front stage from the very beginning. The first three acts of the game feels like an interactive version of Mike + the Mechanics’ The Living Years. You leave wanting to hug your child, hold your wife, call your parents and send your love or just cry your eyes out bitterly if you’ve lost anyone. I have no idea how autobiographical the game is for David Wehle, and I’m hesitant to find out, but it truly was a memorable experience.

The first three acts of the game feels like an interactive version of Mike + the Mechanics’ The Living Years. You leave wanting to hug your child, hold your wife, call your parents and send your love or just cry your eyes out bitterly if you’ve lost anyone.