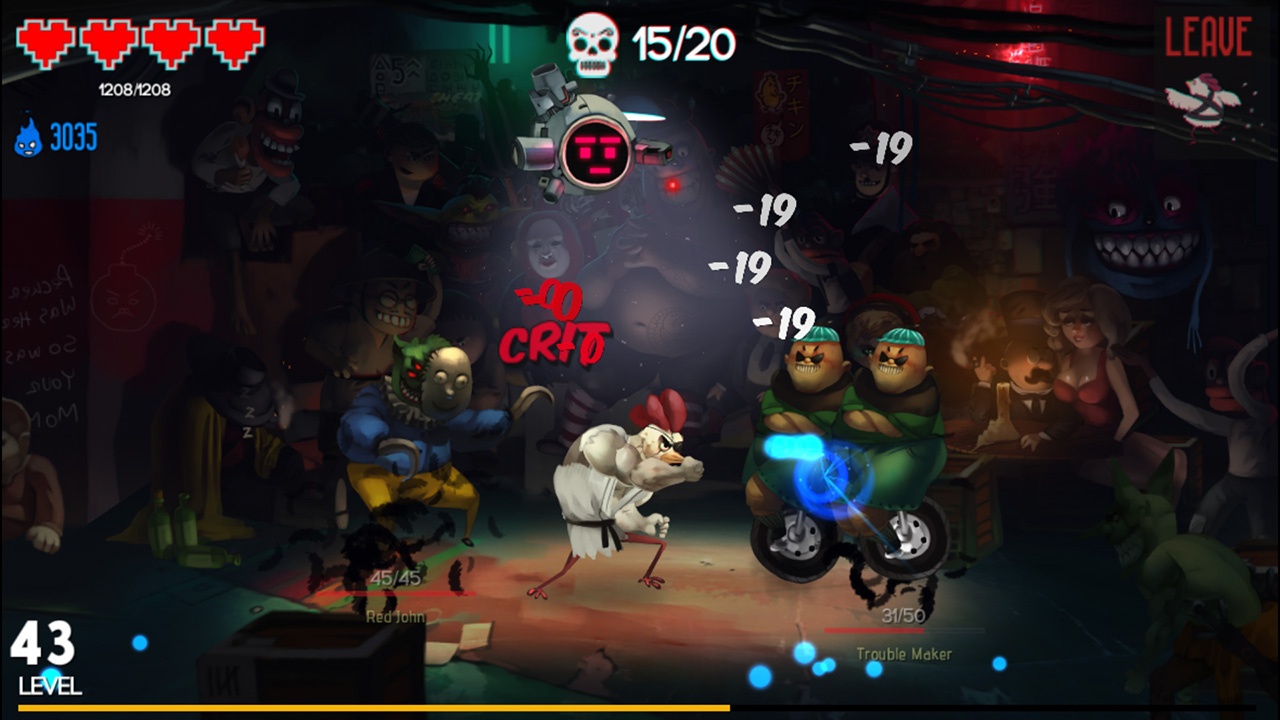 It had to happen eventually, didn’t it? I mean, you’ve got virtually every genre of game under the sun on the Nintendo Switch: from open-world RPGS to visual novels, hidden object games and picross puzzlers, the Switch is a “come one, come all” kind of environment. Many people have been critical of Nintendo’s less-than-curated eShop, not only for poor navigation, but also content quality. We’re seeing some strange indie games cropping up at breakneck speed (though low quality games have existed since gaming began) and it was only a matter of time before the first clicker landed on the Switch. I can’t even say for certain if this is the first, but it’s the first time I’ve encountered one, and I’m certainly not thrilled with it. But, for fans of absurd, low-impact gaming (except incurring carpal tunnel), then you might be excited that Chicken Assassin: Reloaded is now on the Switch.

Mean McAllister is the name of the giant, anthropomorphic and extremely muscle-bound chicken main character, and that should be all you need to know, but wait, it gets better. Mean has a girlfriend named Candy, who is decidedly not a chicken, and she is kidnapped by a dude named Spritzel, who may or may not be a chicken (he looks like a dude, but anything’s possible). Mean, rather than call the cops or do something that doesn’t involve vigilante justice, decides to slaughter his way across the world in a quest to get Candy back. Of course, this isn’t going to be an easy journey: Mean McAllister needs to collect a ton of souls, because I guess that’s the currency Chicken Assassin’s use in this economy. Using souls, Mean can power up his strength, defense, buy new gear and ultimately outfit himself to become a massive, angry fowl and get his girl back.

On paper, this game sounds positively awesome. The variety of enemies is certainly interesting, from simple henchmen to corrupt police, deformed monstrosities and every brand of evil you could imagine. Mean’s quest brings him into proximity of a lot of different equipment, from necklaces and potions to boost his critical hits to offensive weapons, starting with simple fist wraps and moving up to obscene guns and swords. There are so many customization options to make your chicken look totally insane and different, starting with his large, white, ripped body and eventually adding every variant of pants, hats, and eyewear you could fathom. There’s a ton of items that get dropped, and most of them just exist to be sold for more souls, but that’s not a problem. Loot variety is the spice of life! 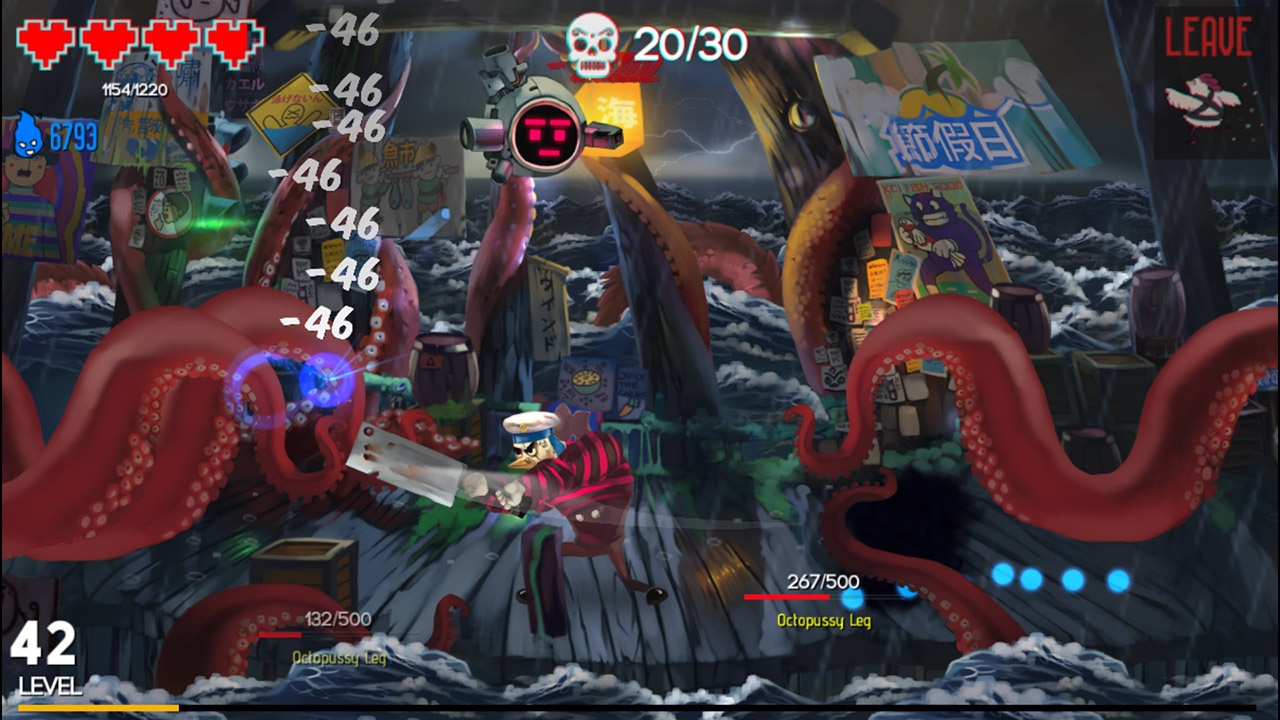 Now, souls are never, ever going to be a problem in Chicken Assassin. Besides the fact that you get so many from enemies and from loot sales, there’s literally a cauldron in your load screen/home that you can just punch, over and over, to get more souls. It’s a limitless wallet that you have no excuse not to abuse relentlessly. Plus, abusing it will unlock some achievements, of which there are HUNDREDS in Chicken Assassin. I really wish Nintendo would get on board with this, because the achievements alone might be worthwhile for some players to pick up this relatively inexpensive title. Getting the achievements means…more souls! More souls means more investment in your upgrades, from buffing your stats to expanding your inventory. You can only get some investments once you hit the appropriate level, however, so no hanging out in the garage and just beating on the pot for thirty minutes straight till you’re a God. You gotta get out there and fight.

And this – this core mechanic, this main idea of what the game is all about – is where things totally fall apart.

Chicken Assassin: Reloaded is a clicker. For those that don’t know, clickers are games where the main objective is just to smash your mouse relentlessly on targets to get points and unlock stuff. They’re pretty popular on Steam, and they have their purpose. It’s a great time-wasting game: clicker RPGS are pretty on point for gaming that can happen in the background, literally playing itself in some cases while you do other stuff. Some clickers are online leaderboard driven, some use half-naked cat girls (no judgement) and others just have over-the-top gore and violence because it’s funny. Chicken Assassin, having no IAP, no leaderboards, and no fanservice, is lacking all of the requirements to make a clicker work on something that isn’t a computer. You’re playing this on the Nintendo Switch, a dedicated gaming console, and you’re mashing the A button relentlessly. 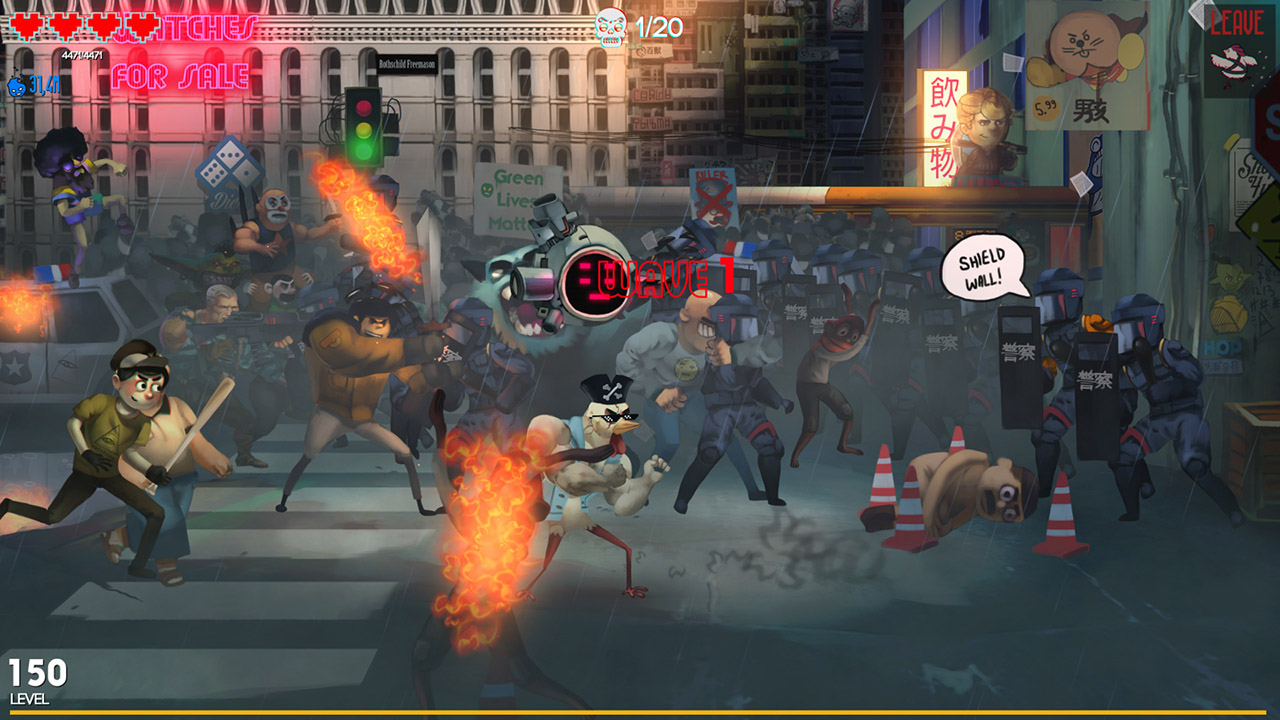 There are several ways this could have been done. Chicken Assassin could have taken cues from One Finger Death Punch and mapped the left and right to the control buttons, letting players really ramp up some click speed. They could have included some touch screen action so that players could smash their fingers on the sensitive glass frame and ruined everything all at once. But Akupara Games and Oneshark came together, chatted, and agreed: a floating set of crosshairs with some serious drag delay was the way to go. As a result, you have to spend so much time wildly mashing the joystick left or right, trying to figure out which of the bad guys is going to murder you first, and then sweeping the bottom of the screen to grab as many souls as you can before the next wave comes in, about a second later, and starts pounding on your feathery ass. It’s exhausting and so unintuitive it took me way, way longer than it should have to even make it past the first ten waves and unlock the second scenario. If your crosshair goes off the enemy, your button mashing means nothing. You just stand there, gormlessly, getting punched in your beaky face. God forbid there are two enemies in close proximity: it becomes a little tenuous to make sure you’re properly locked on.

But even if you like clickers, even if you enjoy the mundane approach to this “RPG” and the “action” happening within, the performance of the game is borderline unforgivable. Chicken Assassin: Reloaded is a remastered edition of the original, meaning that something must have been updated and polished since this game was first published however long ago. But everything has a delay. God forbid you need to visit more than one place inside your safe haven, you just feel this disgusting, sluggish lag. And then you actually notice that touch screen controls WORK here, allowing you to tap on the X, wait almost a full second, and then exit out of wherever you are. Then you can go into your inventory, very, very carefully navigate the millimeter between “equip” and “sell” on equipment (I sold so much stuff by accident), and then exit out…eventually.

If it feels like I kind of turned on Chicken Assassin: Reloaded, it’s because it feels like the game turned on me. When you look at the eShop and the trailer, it promotes this wild, rough-and-tumble action RPG with tons of brawling and fighting. The reality is one damn button, putting the crosshairs left or right, and smashing over and over until your fingers go numb. Boss Rush mode is just hitting the button. Unlocking cauldron souls is just hitting the button. Doing literally anything in this game is just hitting the button. If you know this is a clicker and you like clickers, then awesome, this is definitely a clicker and you’ll find plenty of enjoyment therein. But if you were hoping for anything that had deeper layers of strategy other than “hit, die, power up, hit again,” then you’re in for a world of disappointment.