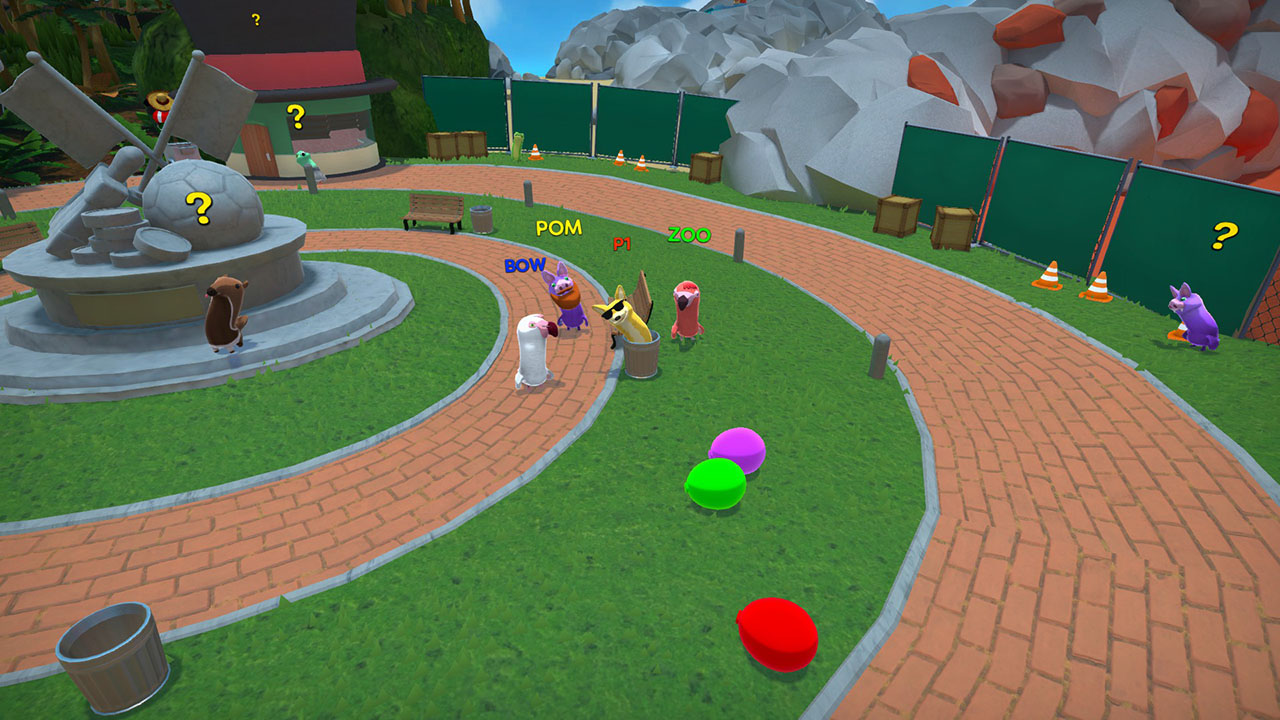 It’s hard to tell if the voice of the eShop comes more from the developers or the customers, but the vibe is still the same across the grade: we like multiplayer games. And why not? It’s literally the cornerstone of Nintendo’s original promotion for the Switch, and it’s been key to Nintendo surviving through the hard times (the 64 and the Gamecube). Hell, if it hadn’t been for big IPs like Smash Bros, Mario Kart and Splatoon to keep the WiiU alive in some capacity, we might not have seen the Switch come into being, and, surprise, all those games are hellbent on multiplayer. So I’m starting to realize that a solo player has a place in this world of gaming (Octopath confirms that), but the multiplayer approach might have a greater breadbasket to choose from. Thankfully, there are some games out there that are simply more fun when shared, but still plenty fun alone. And Sausage Sports Club just happens to be one of them.

Sausage Sports Club is the tale of an island full of ridiculously floppy animals who’ve all come together to compete in a multi-day sporting competition. Kind of. I mean, yes, it lasts multiple days, but the sports seem to be brought on by individual, highly specific quests that have little to do with sports. In fact, if it wasn’t for brief, silly skirmishes that break out between the animals (stolen items, disrespected writings, poor communication in general) it’s not clear anyone would play sports at all. In any case, you’re a newcomer to the island, and you’re going to work with friendly AI or actual friends to win the challenges every day, get the high-ranking and become the Gold Star of the Sausage Sports Club! Good luck, and may the odds…wait, that’s a different franchise. Uh…do…well!

More than the gameplay is the appearance and aesthetic of Sausage Sports Club. Starting out with a small variety of animals and growing vastly, each and every being is a weird, giraffe-esque version of their actual species, sporting tiny legs and elongated necks. The necks are important so that you can swivel your head wildly around, both to compete and participate in some games and also to look goofy. There is absolutely nothing serious, dramatic or dire about these games: everything is wonderfully, unapologetically absurd, and it’s a grand case of “what you see is what you get.” The music is upbeat, bouncy and more in the realm of catering towards children, while the surprisingly varied number of hats will attract Team Fortress 2 and Fortnite players alike. There aren’t any magically hidden weapons or secret underground kabals: you’re merely trying to play sports with other goofy animals, be they dogs, parrots, sharks or any number of unlockable animals as well. 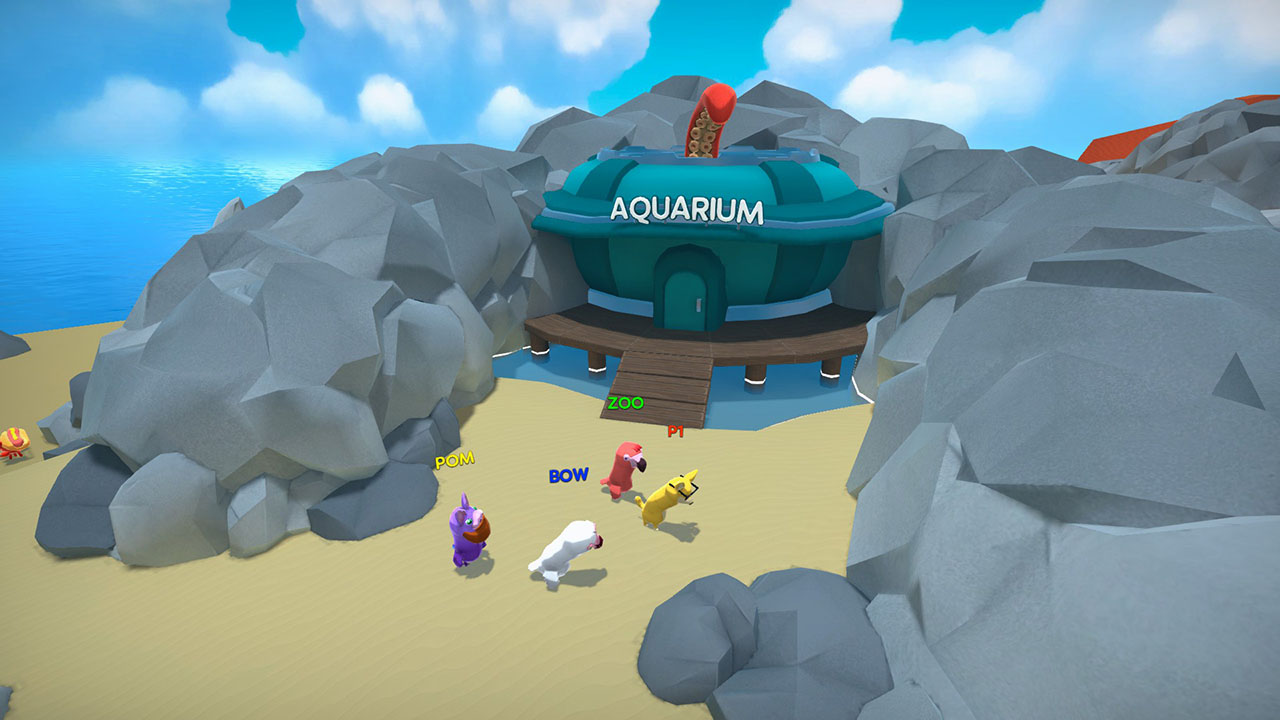 Oh, right! The unlockables. You definitely want to spend some time in adventure mode for Sausage Sports Club, especially if you play it with friends. Unlocking things comes from finishing the games and quests that you’re given in adventure mode. Notice how I said finishing and not winning or losing; Sausage Sports Club only sort of cares about your success rate. Even if you fail HORRIBLY at the games (which I did with several), you’ll receive plenty of points towards minor unlocks (new arenas for mini gaming), major unlocks (new island areas, new characters) and coins (used to buy hats). Naturally, you’ll want to do your best: when the day is done – aka “you finished all the quests” – a newscaster will give you a ranking for the day, and you’ll get more spiffy bonuses if you’ve been a winner. But even if you’re abjectly, unabashedly bad at the game, you’ll still win something. The hat dispenser never gives duplicates, so it’s an upward momentum from the very beginning. You can also unlock plenty in free mode and quick game mode, but you won’t get the coins you want for hats, though those are plentiful in Adventure Mode, sometimes just hiding under rocks or hotdog crabs. Luckshot Games, a fledgling group made up of veterans from other games (most notably two veterans from Battle Chef), are most focused on you enjoying yourself and not grinding for unlocks. Kudos, people, that’s just good business.

Now, onto the game itself. Most of the mini games are 2 on 2 or 1v1v1v1, and each objective is slightly different, though you’ll get the jist of it fast. Some, like capture the flag, are fantastically straight forward: get the flag, stop the enemy from getting your flag, repeat. Others, like paintball, are uniquely funny takes on the game: spread paint around the board with your head, and kick a massive volleyball to change it to your color and splash the other areas. With only four controls to worry about (jump, ground pound, kick and head swivel), you pick up the base controls pretty quickly and go from there, incorporating them into each game. Ground pound is the best way/only way to hit other people, so it’s a crucial move to learn in deathmatch type mini games. Kick is important for hitting balls into targets, which will come up in both mini games and adventure quests. And your floppy, silly head is important for painting (as stated above), but also just for added hilarity wherever and whatever you may do. Personally, I think that soccer is one of the best balanced of the games: it uses every aspect of your controls, has the most straightforward rules, and is the most heavily affected when you change to different stages and courses. 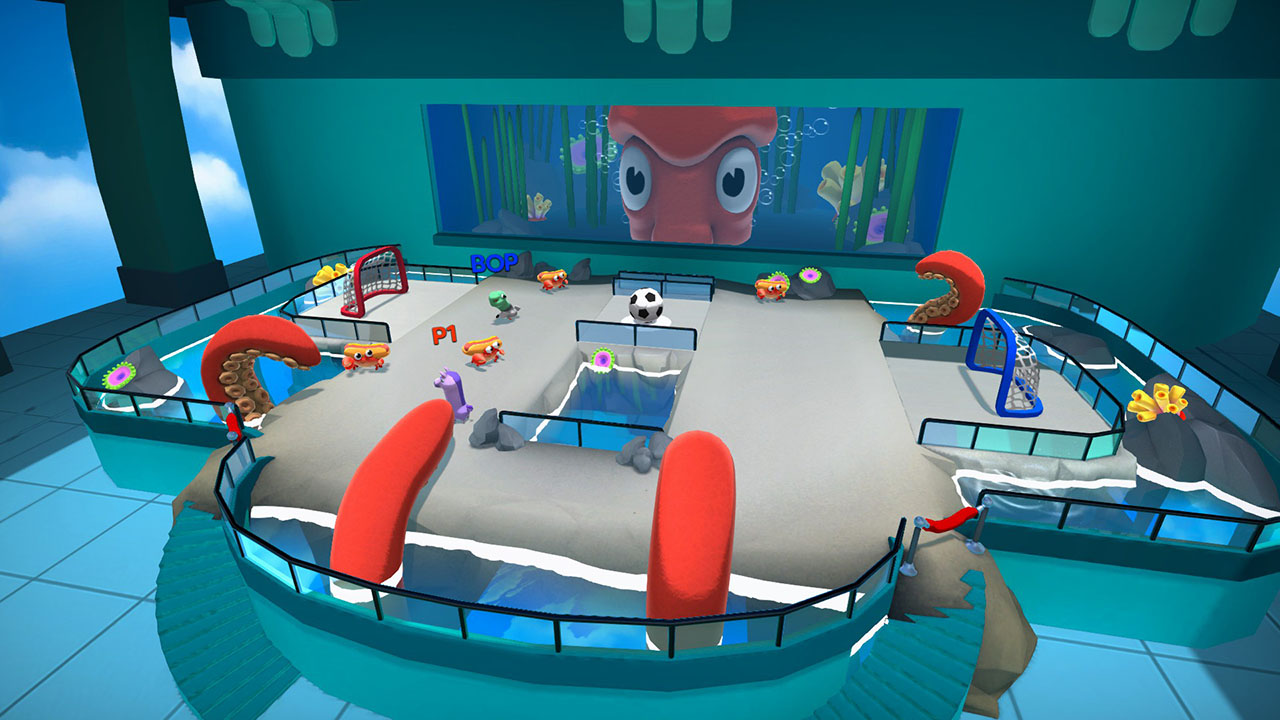 Again, this game is pretty good as single player, but multiplayer helps to iron out some of the inherent single player issues with Sausage Sports Club. For one, you won’t get confused and mixed up with multiplayer. When I did Adventure mode solo, I went with the hedgehog character, and, unfortunately, a couple early matches ask you to pair up with an AI hedgehog who looks exactly like you, sans hat. The result was forgetting which one I was and making a ton of small mistakes when the skirmishes broke out, especially in the coins game (gather the most coins, knock the money out of the other team). Sooner rather than later, you unlock new skins for the animals, which adds even more distinction than the hats, but it’s still a bit of a confusing squat when you first start out. This, I imagine, is also prevalent in the multiplayer aspect, though by the time I got other people involved I had plenty unlocked and we had no problems selecting individual, unique characters (Zebra Young for life!).

But the biggest thing missing from single player is just the joy of something like this. Let me explain: this game is phenomenally goofy, like playing a game in the car where the rules change every five minutes so people don’t get stir crazy on the long drive to Minnesota. If you were playing the game by yourself, maybe with Siri to help, it’d be fun, but there’s an inherent hollowness that tells you “This would be better with ENTER FRIEND’S NAME here.” Sausage Sports Club is so wonderfully aloof that you want to share it with other people, even if they’re just watching and cheering. Playing it alone was fulfilling and entertaining right up to the point where I finished and realized I had the game really expanded and set up now…for other people to come and play. And holy crap, you can play with up to eight other people in some games (really making good use of those APIs!), so why would you not want to? The answer, sadly, is that we’re all busy and sometimes schedules just don’t line up.

But Sausage Sports Club feels like such a great game to have to play with new and old friends alike. It takes about a minute to figure out what to do, and the tradeoff is you aren’t going to have someone school newcomers because they know the secret sausage trick or something. This is classically quirky without being surreal and definitely E for everyone. If you’re looking for another great multiplayer experience for your Switch, Sausage Sports Club is right up everyone’s alley.