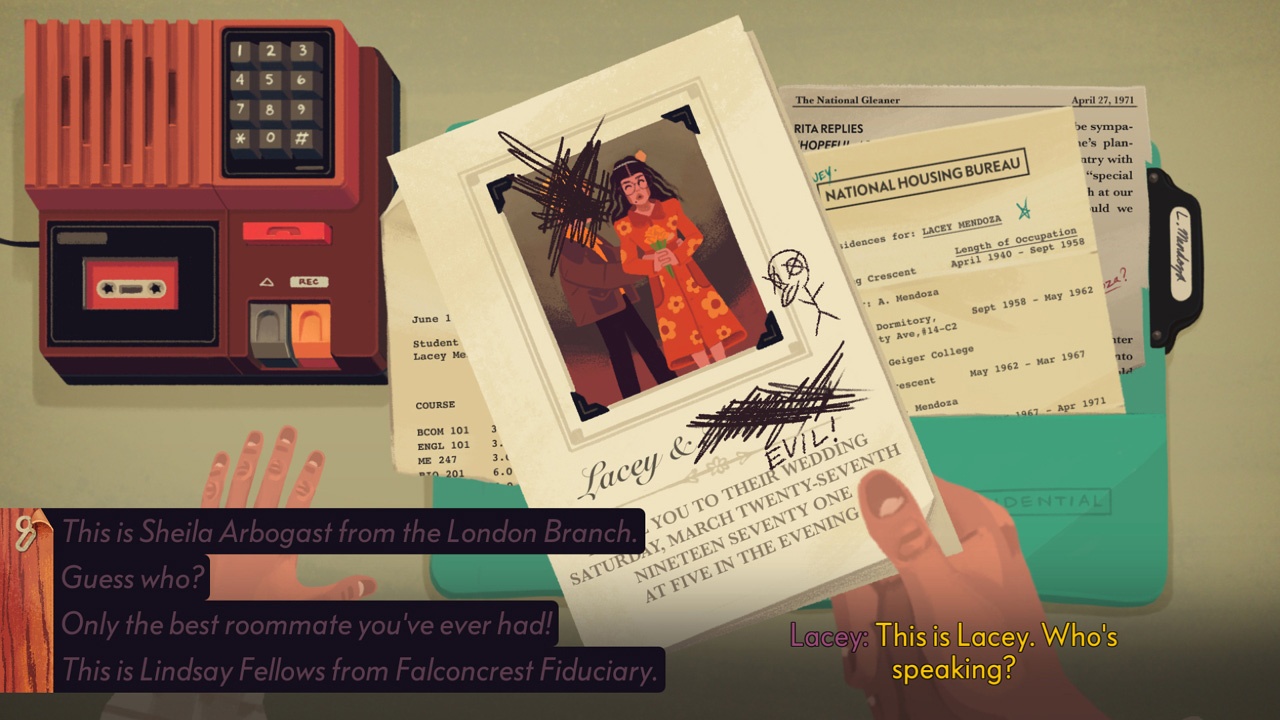 Spies, secret agents and covert operations have been a point of fascination and interest for as long as there’s been war and imbalance in the world. A profession that goes back as long as the existence of government, a spy can and will infiltrate the rank and file of a foreign affair, gain trust and access, and extract the data they want or need, usually without being noticed at all. As the world changes and evolves, so does the profession. We’ve gone from the physical presence to the digital, where posing as another is as simple as making a new screen name.  But, as the game shifts, so do the players, and spywork takes on a new form. And, for some, this altered ego of deskwork espionage is less-than-savory compared to the double agent dreams that screen and page glorify.

Noomi Kovacs is our central protagonist in The Low Road, a fresh-faced academic who finished top of her class at the LeCarre Institute for Exceptional Spies and is now ready to take on the world one trenchcoat at a time. Only thing is, times have changed: the spy game now involves a lot of social engineering from behind a desk, getting people to just give you the information you need. It’s got a legitimate air about it, now with desks, a bullpen, air conditioning, health care, and a decent long-term job projection. It’s also utterly boring and keeps the amount of field work to a minimum, sending only one spy out to do real covert duties while everyone else keeps cold calling. Noomi, who is interested in a life less ordinary, must use her wits and her skills to figure out how to turn the tides and embark on a massive mission that will take her into a heavily fortified compound, rescuing scientists and impressing her jaded, cynical superiors. She also hopes to help re-invigorate her supervisor, Turn, into remembering the thrill of the job, so that they can work together to bring about some real change in what appears to be an even deeper case of double-crossing than the player had imagined. After all, the fate of the world is at stake! Or, at the very least, the fate of the automotive industry. 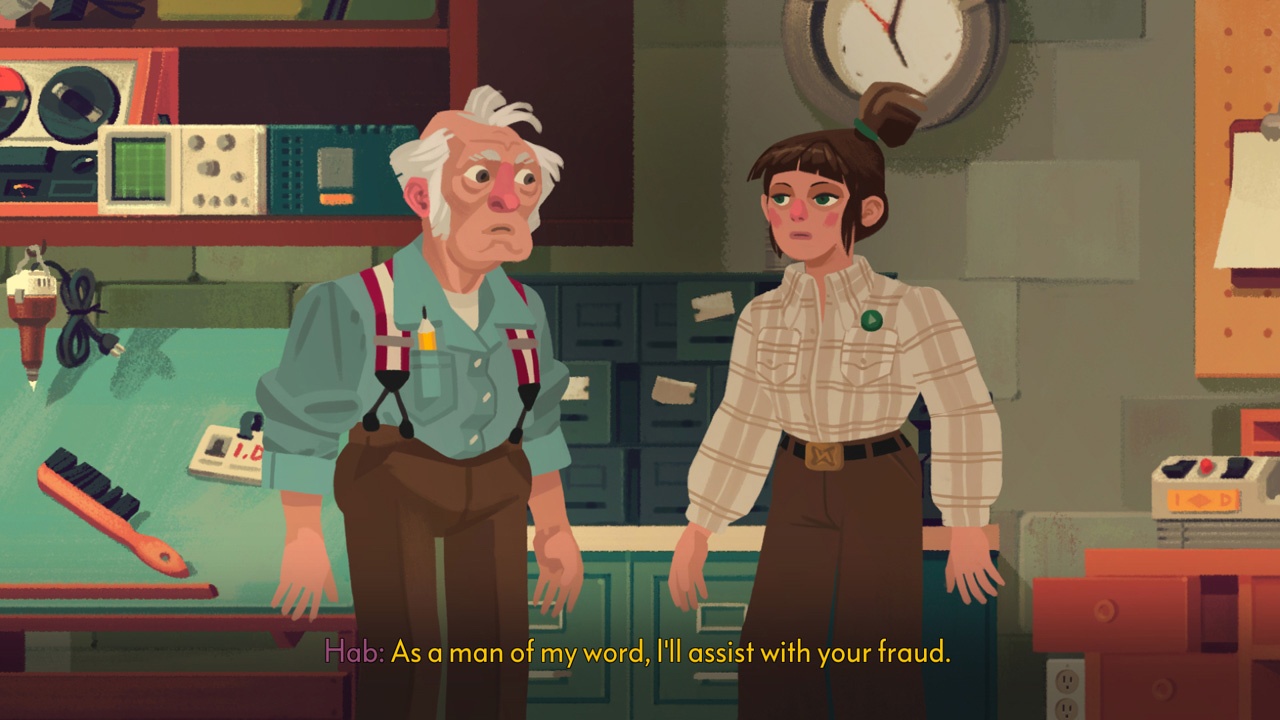 The Low Road isn’t the first game from XGen Studios, but it’s easily one of the most unique and memorable in terms of characters, story and gameplay. The genres of games have a hard time pegging where this title lands, and so it becomes classified as a point and click adventure/puzzler, though I would argue that it falls somewhere else entirely. See, a lot of point and click games have become interwoven with HOGs (hidden object games), with the former require a bit of clicking and the latter requiring a TON of clicking. The Low Road streamlines things, focusing more on your character’s actions and choices and keeping inventory and constant trial and error interaction to a minimum. To be fair, there is a bit of clicking around, but it’s incredibly boiled down, especially with the Nintendo Switch’s presentation: you can only “click” on things when you’re very close to them, and the number of items per room that can be interacted with is almost always less than ten. Your inventory will end up with a small number of single use items, and many will be apparent in their execution, or at least be made apparent after a short amount of time. When characters have nothing more to say to you, the conversations will automatically end as soon as you start them. If you can’t or shouldn’t interact with something anymore, they stop highlighting and won’t respond to clicks whatsoever. The Low Road does a fantastic job, mechanically, of moving you along and keeping you on course.

In terms of gaming for the sake of gaming, The Low Road has a bit of a balancing act going on. In one direction is the aforementioned PnC elements, which are pretty barebones, utilitarian but not flashy, and are necessary to drive this (comparatively) short game forward. However, the star of the show isn’t the walking, but the puzzles, which crop up in twos or threes every chapter. The puzzles take on a number of different forms, from cutting wires and pipes to complex slide mechanisms, and even interweaving the game’s excellent script with the puzzles themselves. The puzzles never have any explanation outside of the very first, which gives you just a couple pictograms to explain how the buttons on your controller should interact with the task at hand. Almost every puzzle has the player figure it out on their own, not only the solution but the actual purpose for what needs to happen. The result is not frustration but a test in perseverance: you don’t just arbitrarily enter into a puzzle, so why am I trying to move this balloon to the other side of the screen? While the controls are sometimes a little wonky (using just the right joystick to emulate mouse movement has middling success), the puzzles keep you engaged and curious, and definitely add a flair that makes The Low Road unique.

Even moreso than the game itself is the presentation and atmosphere. Set in the mid 70s, XGen Studios has taken a ton of care to model the game as a beautiful period piece, taking great care in details from clothing and office layouts to even ensuring that the speaking styles help imitate the cadence of the day. In fact, the well-crafted dialogue almost pushed me away from this game initially: the snarky, condescending tones of several members of Pembrook Motors (where Noomi is working) was grating and infuriating to hear. However, once I steeled myself and dove deeper, you get a chance to hear and see more of the characters and their dimensions, from the incredibly pompous Thonton to the surprisingly complex and adaptable Turn, and Noomi herself proves to be a strong and sassy lead without being too stereotypical or one-dimensional. I don’t know why, but the semi-madness of the REV INC painter, Oona, is one of my favorite interactions to date, if only because her unflappable attitude regarding her becoming a great artist one day. The voicework is phenomenal from start to finish, and every character has been carefully selected to give a real personality to the person they’re portraying (though Hab, the local gadget creator, sounded and looked like Olivander from Harry Potter, but that’s not always a bad thing). 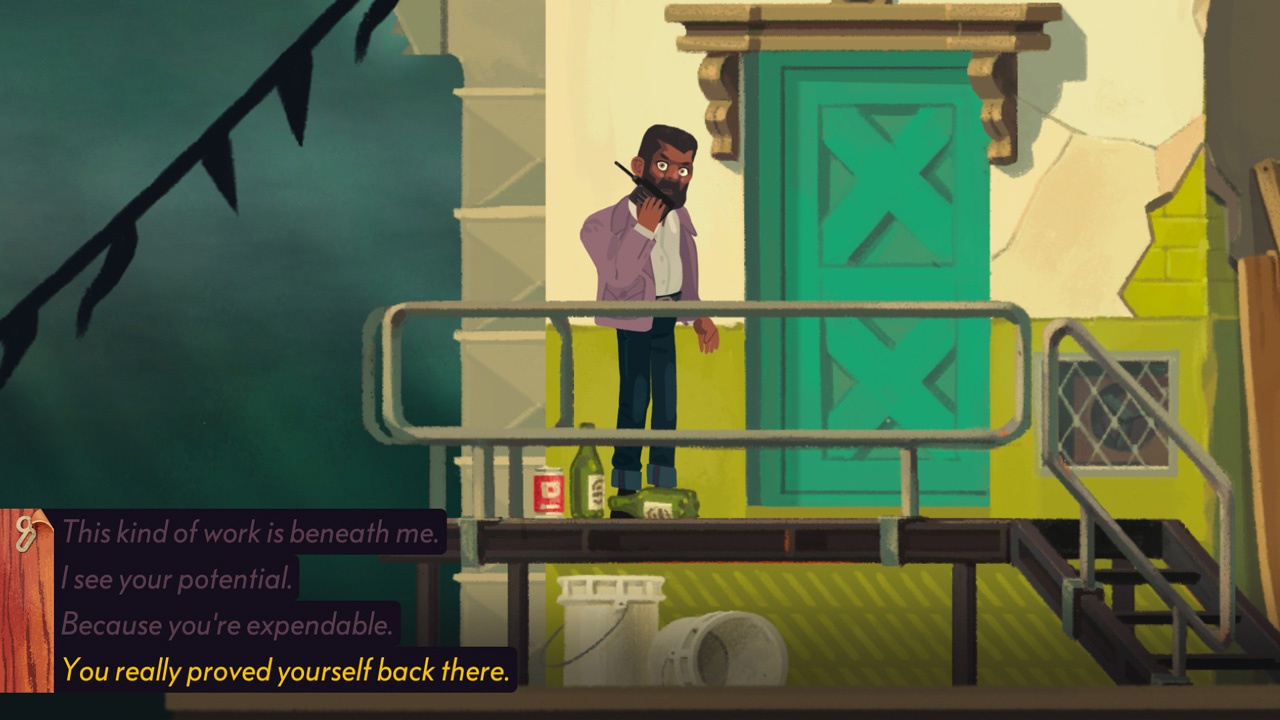 One thing that does need a bit of remarking is the trial and error system of the whole game. There isn’t really a way to die or lose in The Low Road, which makes for an interesting dynamic throughout. For example, usually failing to get a puzzle right results in some fast paced scrambling to either reset the situation OR simply shaking it off and trying again. Given that a couple of the puzzles are pickpocketing, I was shocked that I could simply give it another go when someone realized I was elbow deep in their coat without being recognized. On the other side of things, failing dialogue based interactions are kind of fun and lead to false endings, each of which are worth seeing. Saying the wrong thing to the wrong person can lead to the story ending and finding out where everyone ended up a la Ridgemont High, before a high-speed rewind button appears and takes you back to the beginning of the talk. It’s clever, and a damn sight better than getting a “BAD END” followed by trying again from the top. The Low Road isn’t trying to be a Western visual novel, but it is looking to deliver an interactive story that stands apart and represents some enthralling and momentous moments that are genuinely funny and exceedingly nuanced.

When I reached the end of Noomi’s journey, I was stunned: surely that can’t be everything! It’s only been…huh, four hours. For the first time in a long time, I was sucked into a game from start to finish, playing through with my family in attendance as we watched the plot twist and the dramatic final oration to determine the ending of the game. I want to say it’s a shame that the game is short, but that’s simply not true: The Low Road is exactly as long as it needs to be. The fantastic, atmospheric soundtrack, the witty banter, the solid puzzles and the pacing are all on point and serve to give this game an identity all its own. If you’re at all a fan of excellent tales framed with some truly great puzzles, this is the road for you.

The Low Road delivers some of the sharpest exchanges that I’ve seen in recent gaming, presenting a darkly funny, memorable puzzle adventure on the Switch.