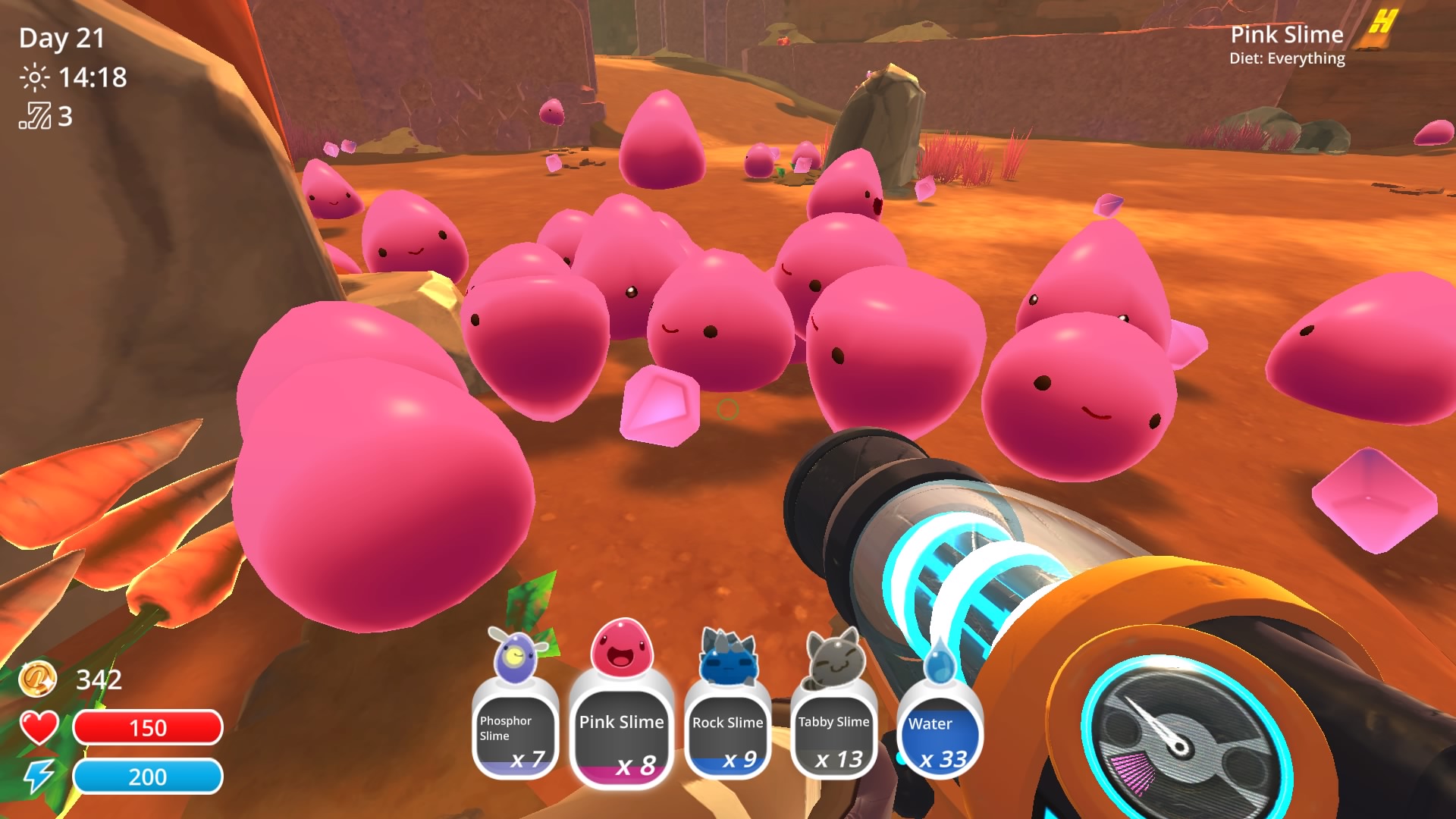 Slime Rancher is a simulation and adventure game that has you raising slimes and exploring the breadth of the Far, Far Range. It’s a lonely place and any character interactions are done via mail and calls. The only other creatures that call this place home are chickens and a host of wiggly, wobbly Slimes who you can take back with you and raise.

The game gives you a vacpack which, like the machine in Ghost Busters, allows you to suck up objects and critters. This feature is possibly the game’s greatest flaw as you have an incredibly limited inventory and there isn’t a lot of finesse when attempting to picking up specific objects. Oftentimes, you’ll suck up something completely different from what was intended and will have to shoot it back out. What is a minor inconvenience becomes a recurring annoyance when you’re trying to juggle between slimes in pens and the plorts they’re producing and the food you’re feeding them– all of which are on the ground. And if you’re thinking, ‘four slots? That’s all you had in the old Harvest Moon games; I can handle that there’s no option to upgrade to more slots. You can create bigger stacks (up to 50 when fully upgraded), but you can’t carry more than four different item types at a time. For gamers like me, who frequently find themselves running into inventory problems, this is a huge learning curve, but not an impossible one.

The island you call home is relatively large and broken into areas with varying terrains. The game encourages exploration by placing treasure pods and Gordo Slimes in hard to reach/easy to overlook places–the latter of which will sometimes drop slime keys which give you access new areas. 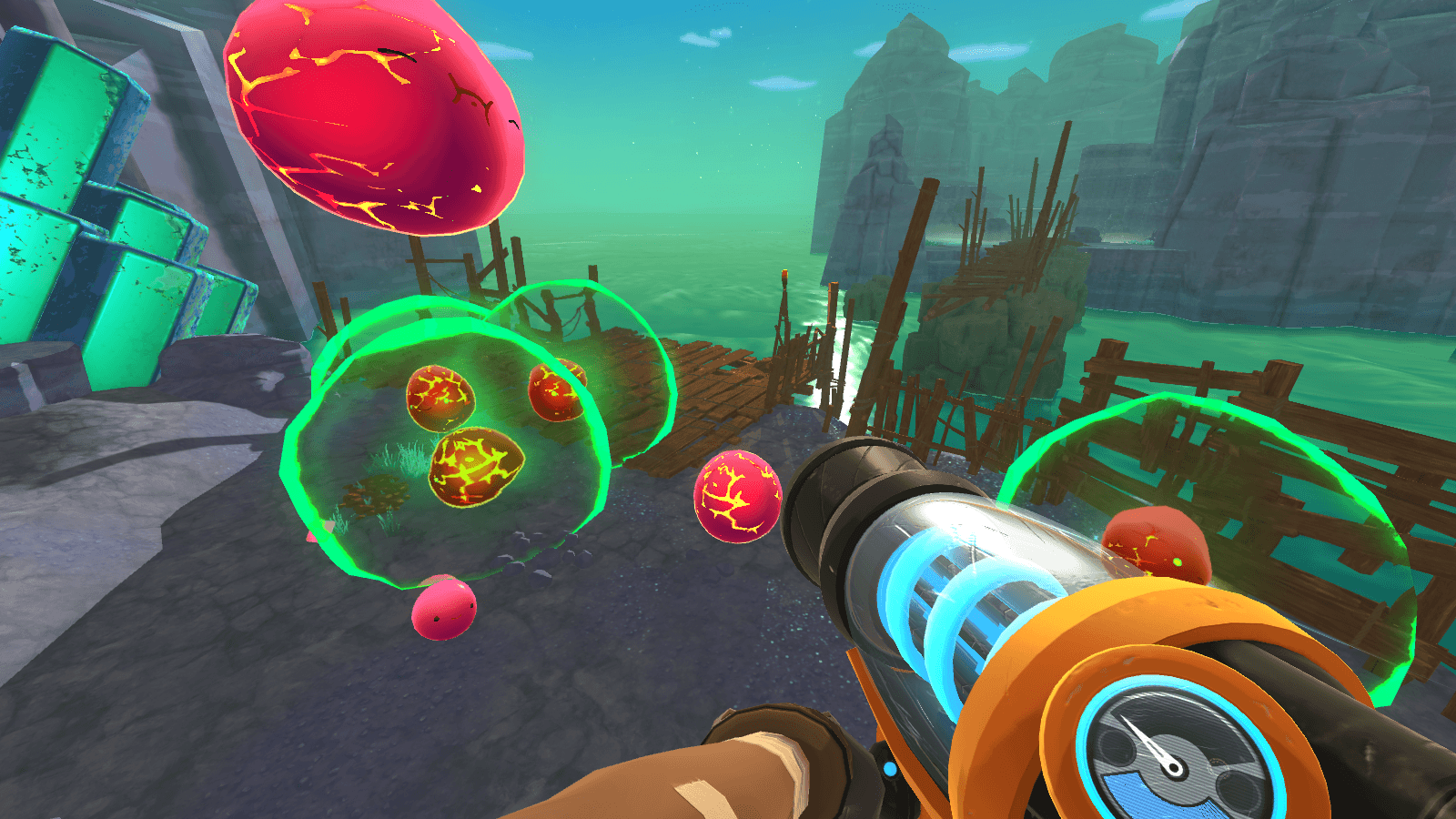 What you bring back with you, whether that be Slimes, chickens, or some sort of flora, can be raised on your ranch. You’ll need to build the correct recepticals for whatever you’re nurturing or storing using the consoles on every available patch of land. You’re able to build chicken coops, Slime corrals, and gardens. Each has upgrades to improve the output of whatever you’re raising, including auto plort collectors and feeders for your Slimes, which will cut down your daily grind once you start accumulating a collection. While gardens and coops produce food for your Slimes, the Slimes themselves produce plorts, which can be used in a variety of ways. The most common one is to sell for the game’s currency, Newbucks, though they also have the power of creation if used in conjunction with other Slimes and also to create gadgets.

Slimes come in cute, mini forms that wander the wilderness, but they can also be transformed into Largos if fed the plort of another. These hybrids are a great strategy to get the most out of your corrals as a hybrid Slime will produce two types of plorts. Hybrids also make it so that you can feed the Slime in question different types of food. This is particularly useful if you have an abundance of one type of food, but not another, and the easiest Slime to mix with is the common Pink Slime, which can be fed anything.

Once you gain access to the lab for a modest 10,000 Newbucks you can start making gadgets. These run the gauntlet from decorations to harvesters, which allow you to gather the materials needed for more complex gadgets, to teleporters which allow you to transport materials and even yourself in the blink of an eye. When utilized correctly, these gadgets kick the game into easy mode where your limited inventory won’t matter and you’ll be able to fast travel to any of your discovered areas. 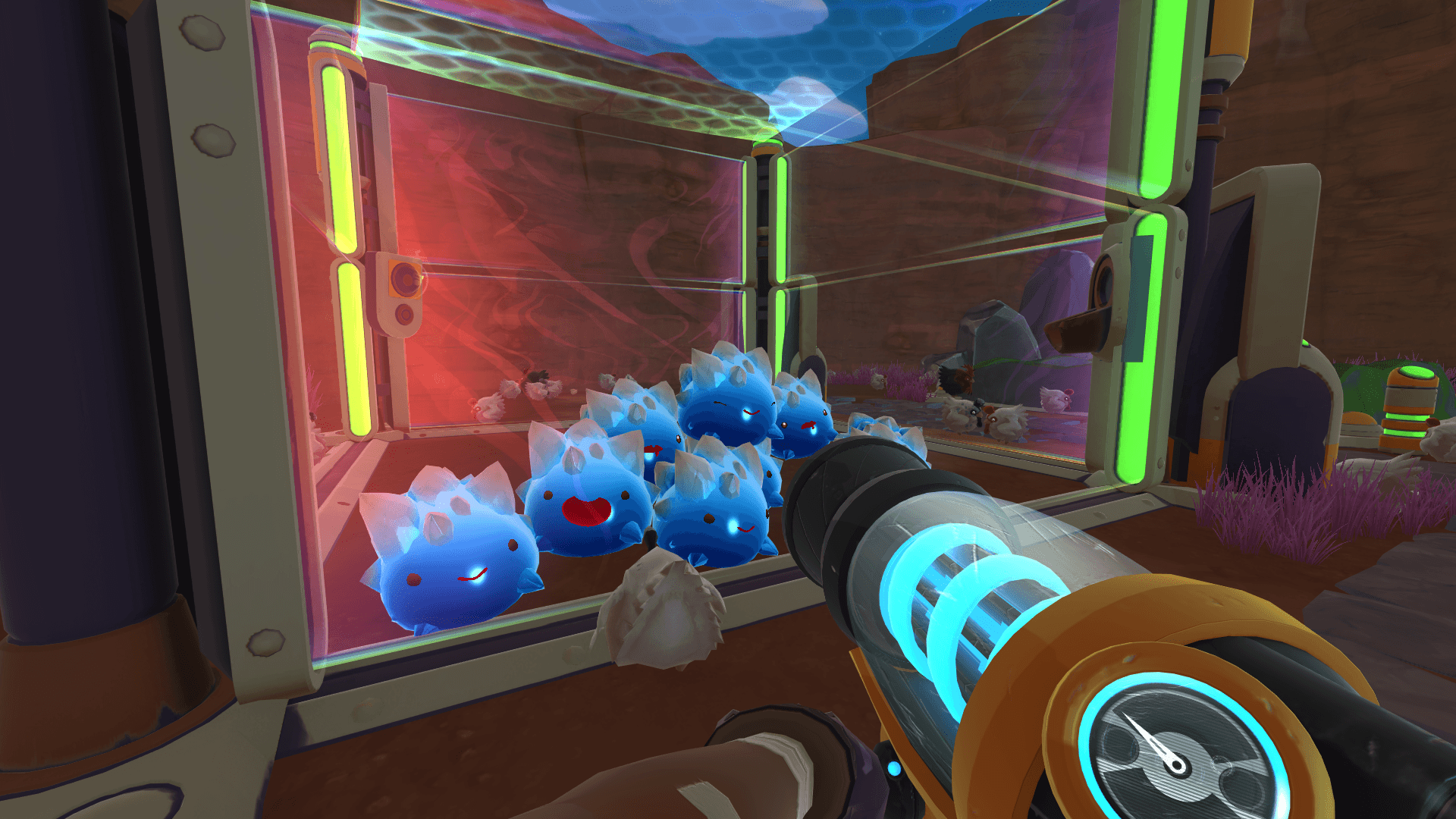 As you progress, you’ll unlock upgrades for your character, including health and energy upgrades and new abilities. Unfortunately, there’s no character customization. This is a minor flaw, but it would have been nice to at least be able to name my character, much less choose what she looks like. You can select the colour of the buildings in your farm and of your vacpack, but that’s it.

There are three game modes: adventure, casual, and rush. If you’re wondering which is right for you, adventure mode is the standard game type where hybrid Slimes that eat plorts from another Slime will transform into terrifying creatures called Tarrs. These will eat other Slimes and attack you and can break out in any area where several Slime types coexist. Casual mode allows you to play without fear of Tarrs, though that will lock you out of getting the platinum, which requires you to place a Tarr on the No 1 Slime Stage, a gadget you can make late game. Finally, rush mode challenges you to make as much money as possible in one hour. There are ways to extend your alotted time, but expect a healthy amount of challenge!

Slime Rancher is an easy recommendation to anyone who enjoys games like Harvest Moon or Stardew Valley. It’s a simulation game that allows you to explore at your own pace and, due to its open-ended nature, has potentially limitless replay value. After you’ve finished the main campaign, there’s even another game mode to attempt. It’s an adorable world that you’ll fall in love with each and every time you see those smiling faces and hear their cutesy chirps and it’s one I’ll be keep revisiting for sure.

Quite possibly one of the cutest games that has come to console to date.