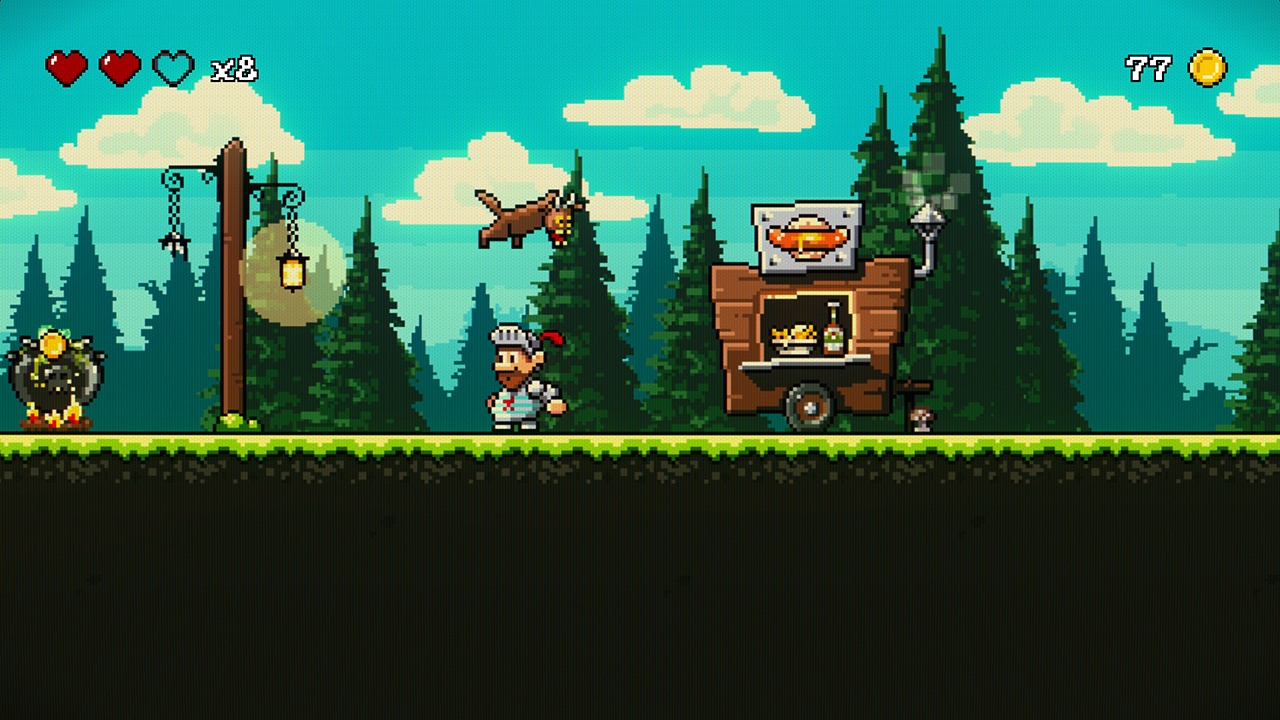 “Don’t judge a book by its cover” is something we get told a lot as children to a.) help us understand that everyone has a deeper story than surface level and b.) some publishers choose terrible jacket art for books. The former is certainly true, but the latter is being impressed upon a growing number of media consumers that are being bombarded with multiple lifetimes worth of entertainment, and they need to decide where to set their sights. For many, it’s easy: stick in the circle that you know and love and try to tangentially branch out from there. If you really like Coppola films, you’ll probably enjoy De Palma. If you love Muse, you’ll want to try Survive Said the Prophet. But what happens when a cover expresses something inherently bad (not offensive or polarizing, just poor quality) and you just need to roll with that? That’s the problem when it comes to picking up Sigi: A Fart for Melusina.

Supposedly the plot of Sigi: A Fart for Melusina is about the titular knight, Sigi, riding off on an epic quest to save the love of his life, Melusina. I’m not saying that’s not the case, but it seemed like the game started with a dude who saw a mermaid with huge cans and hoped he would see her again someday after he scared her away with a fart. You don’t even know she’s gotten herself kidnapped until much, much later than the beginning (you know, where stories usually start). Anyways, Sigi then decides to go through a series of levels, fighting some bosses along the way, and the whole thing is over in an hour, tops, so you can probably figure out the ending either by playing the damn thing or just figuring out that our gassy hero will probably get the girl in the end (though there is actually a secret ending, if you can believe that).

Sigi, which comes to us from fledgling developer pixel.lu and published by Sometimes You, is a side-scrolling platformer with absolutely minimal investment in skill or heavy attention. The player needs to get from one end of the stage to the other, collecting coins for no apparent reason other than to get an occasional extra life and defeating enemies, either through a series of weapons that Sigi can find along the way or by jumping on them. Additionally, Sigi can find floating letters that spell his own name, and having all four of those by the time you reach the bratwurst and beer at the end of the stage means another 1-up and some stars around the level, indicating that it’s 100% complete. The letters are sometimes hidden in secret rooms around the level, which can be found usually by throwing your weapon heedlessly and listening for when it sounds like the wall is a bad guy and not just a wall. The completion is necessary for the secret ending, but by no means needed to actually finish the game and deal with the fall out in the end. 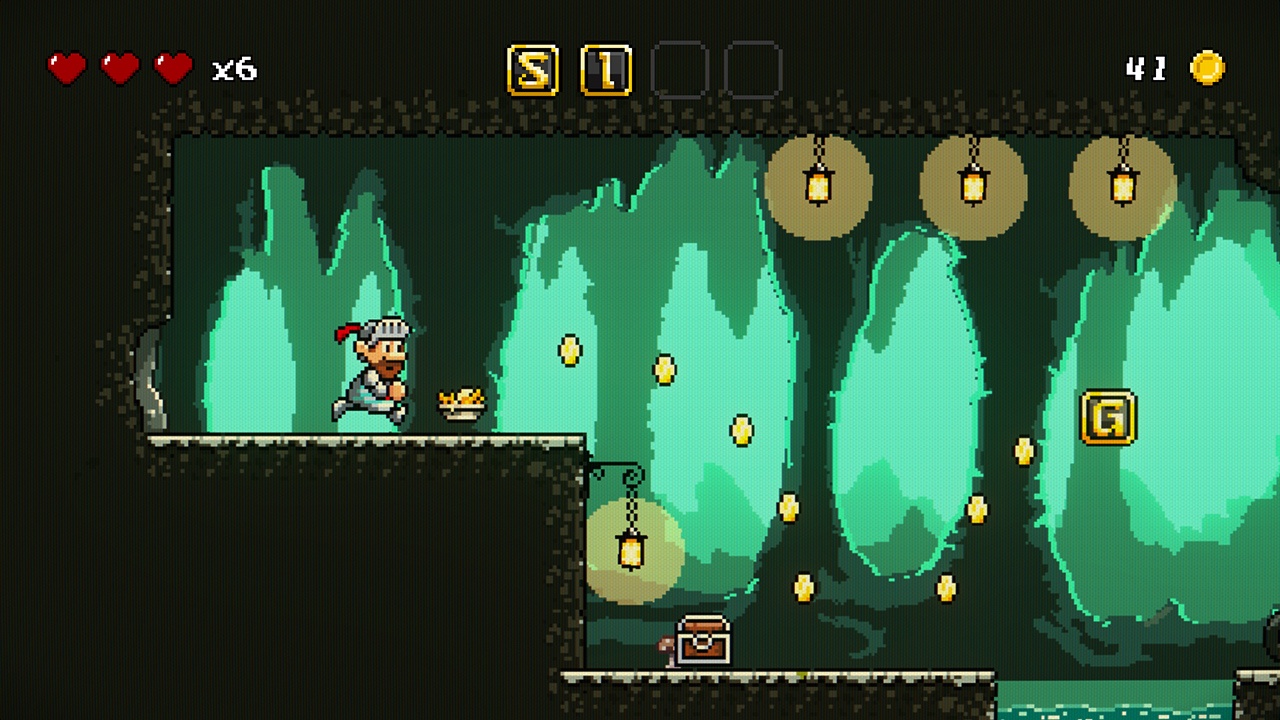 What’s really odd is that I quite like the core gameplay style and performance of Sigi. As something that’s done in medium-sized pixels, it’s not very demanding in resources or install size, and quite comfortable in comparison to a lot of indie platformers. Moreover, there’s a certain amount of satisfaction with the variety of enemies and attacks that are going on. There’s some traditional, shambling zombies, giant rats, crazed birds, sprinting skeletons and a bit of everything mixed in. The bosses are sufficiently odd, starting with a blind ogre (?) that throws a fireball in the wrong goddamn direction and then runs into a wall, and ends with what I can only say is the monster version of Hulk Hogan. Each monster that isn’t a boss can be taken care of with a well placed jump on the head, but you’re better off using the arsenal that Sigi can find throughout the game. You start with a throwing sword, but end up with throwing axes, an awesome bolo/morning star mix and, of course, a chicken leg. It’s not powerful, but the range is good and the speed is decent, so might as well enjoy.

And each level of Sigi: A Fart for Melusina is sufficiently short and varied. While they’re basically all dark and set with sparse water traps (Sigi cannot swim), there’s enough to keep things interesting. There are spots that you can slam down on with your massive girth and find hidden coins, all the aforementioned secret caverns where items may hang out, and moving platforms, including clouds that fall under your weight. There’s so many coins strewn about that you’ll have double digits in spare lives in no time at all, and checkpoints disguised as gravestones are frequent enough that your missteps won’t be cataclysmic. If you fall in the water or take too much damage before you find some nourishing hot dogs to replenish lost life, you’ll respawn almost immediately, not even bothering to reset the enemies left or anything you’ve already unlocked. The game definitely handles this aspect right, giving some of the best turnaround in dying that you could hope for in a game. 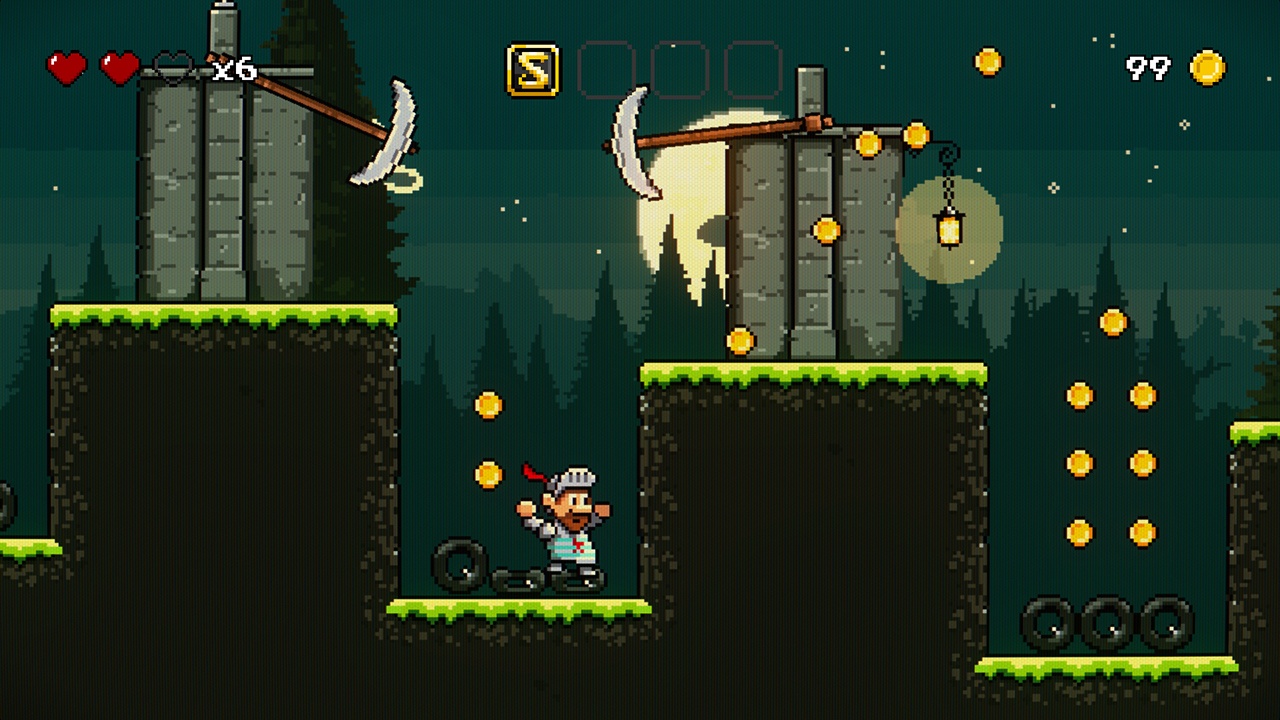 However, the juvenile humor and soundscape of Sigi really make it a bit of a grating experience. Sigi feels the need to quip about things every so often, from his own flatulence to the monsters and how they relate to his life, and the lines are just flat sentences that pop up at the bottom of the screen. There’s no real charm or humor to it, other than a short chuckle that comes when you see the final boss. Worse than the farts, however (which are just mixed in everywhere) is the cacophony of random chimes and beeps that are peppered throughout the game. You will hear these tinny noises every so often, and I literally couldn’t figure out what made them happen or not happen. At first, I thought it was tied to enemy spawning or coin collecting or SOMETHING, but nothing really held true as a constant as to when I heard them. They sounded like they were lifted straight out of an ATM, or possibly someone using a cell phone from the late 90s, and it was honestly quite distracting. Eventually I had to just mute the volume altogether, though the soundtrack wasn’t that memorable, so the loss was negligible.

What it really comes down to is how much you value your dollar. Sigi is a cheap little title, no debating that, and, if this were twenty years ago, these guys would have made a small fortune pushing this out as a hilarious viral game on websites, possibly one of the most detailed and in-depth things that you could find on Newgrounds. Even now, it’s certainly decent, but the replay value is really quite low, and, once you’ve beaten it twice, you’ve now seen everything there is and there’s still another 45 minutes left of Shawshank Redemption.

Still, five bucks isn’t terrible, but it’s totally up to you on where that money goes. I love and support the indie game scene, but i wouldn’t play this myself more than once. If you love cheap toilet humor that doesn’t go terribly raunchy and enjoy competent but short platformers, you could do worse than Sigi. Having said that, I don’t think you could do much worse.

Sigi: A Fart for Melusina Review

When a game has fart in the title, you kind of know what you’re in for, but Sigi still delivers a fun, if short, adventure.