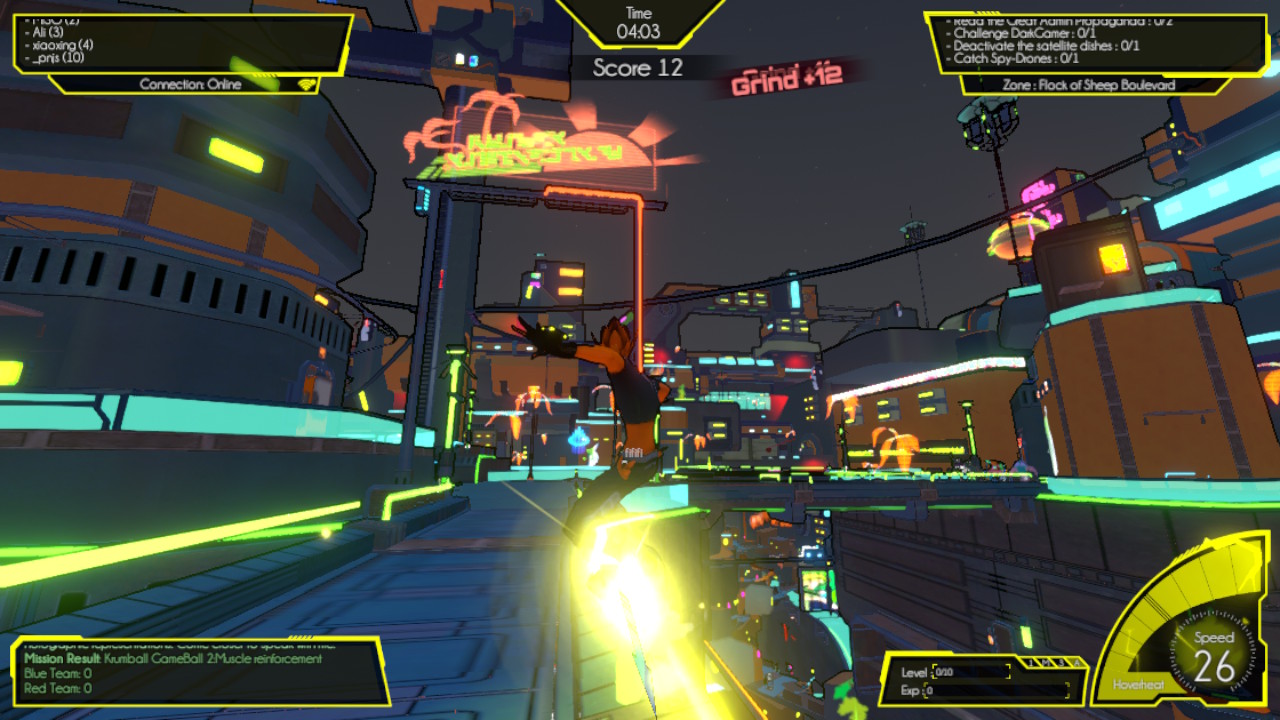 As gamers, we have to follow a set number of rules. Not in how we act or are expected to perform within society, but in the mechanics of whatever game we are playing. Whether it is getting from A to B, or fetching this and that and even decimating the competition to be the last man, or team standing, in order to beat the game you need to adhere to the boundaries of how it works and master its mechanics to be successful; unless you cheat of course, but that’s something that should never be condoned. However, wouldn’t it be fun if we could rebel against these restraints and play the game however way we want to. Well, now you can in Hover, a futuristic and neon-filled parkour game, out now for the Nintendo Switch.

Developed by Playdius, Midgar Studios and Fusty Games, with publishing through Plug In Digital, this game is a direct port of Hover: Revolt of Gamers which was originally released on PC in 2017. You play the role of a newly-created clone within the futuristic 3D open world of ECP17, or Hover City as it is more affectionately known. Being under the rule of a dictatorship, a small of band of rebels have formed, known as the Gamers, and together they run, jump, grind, and freestyle their way around the city as they parkour its dizzying heights to sabotage various forms of propaganda, help out civilians in need, compete in races and slide a path to their ultimate goal of reaching the Galactic Union’s Oribtal Station to warn them of the growing dictatorship and put an end to their city-wide oppression.

Although rather limited in its options and aesthetics, you get to create and name your clone before embarking on a brief tutorial that details movements and abilities. Once recruited into the resistance, you are then set free amongst the dystopian environments of ECP17 in order to contribute to the growing uprising and do your bit for the rebellious group of the Gamers. Sitting somewhere between the gameplay and mechanics of titles such as Jet Set Radio and Mirror’s Edge, you’re immediately thrown amongst the vibrancy of the city, free-running around its neon-lit architecture as you seek out fellow gamers and explore the environment. However, it’s very easy to approach the game as being like a rabbit within the beams of headlights, as you’re given very little information with which to prepare you for what you need to do and in some terms, this is one of the game’s biggest appeals. 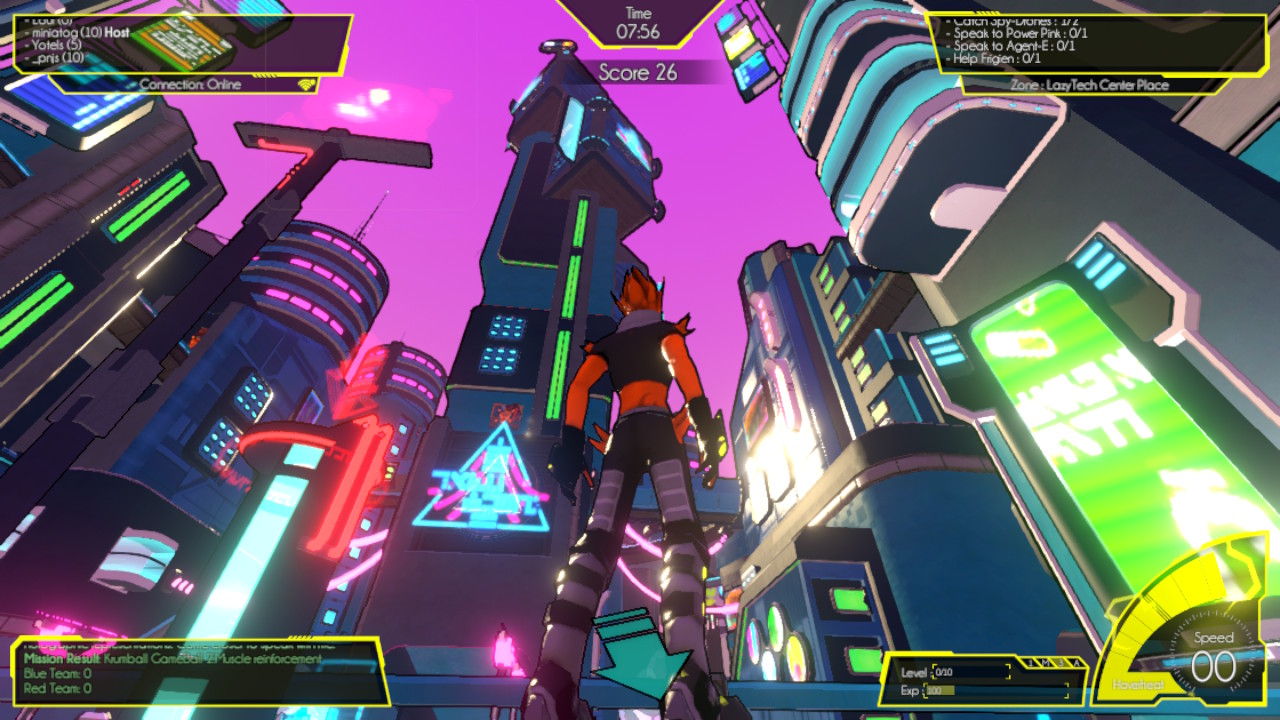 As soon as you break into the city, it’s very easy to get lost within its hustle and bustle, or even struggle to ascertain what you’re next move should be. The crowded atmosphere can easily block out objective markers or any sense of direction; especially with its distinct lack of any on-screen map. However, with progressed exploration and interaction within the city’s limits, you can soon pick up the fragments of your being and begin to learn a meaning to the game. In short, without giving too much away, you simply need to prove yourself to the Gamers through a series of tasks and objectives, as well as show you have the skills in your free-running and parkouring style which produces some truly breath-taking moments in your agility.

Patience is key here. Firstly, mastering the controls becomes paramount in order to progress and succeed within the game. Using either first or third person perspectives, you control the movement and speed of your clone with the left thumb-stick, whilst the right stick rotates the camera. ZR performs a jump, as ZL lets you grind. It’s instantly accessible in promoting an ease-of-use in executing moves and interacting within the environment. Along the way, you can scan and interact with various objects and NPC’s with the A button; a mechanic that also employs the Switch’s gyroscopic ability. However, with its fast-pacing of acrobatic movements, mistakes will undoubtedly be made as you underestimate jumps, or fail to latch onto a rail, which brings in a neat little feature of re-winding your actions to a previous point, a function utilised with the X button.

This seems to be essence of what makes Hover work. It’s full of these ‘neat little features’ that need to be sought out and learnt to get the most out of the game. Everything may seem out-of-reach or vague at first, but with deeper exploration and interaction, you begin to learn, not only the layout of the land, but also the layout in which the game plays. By finding and completing tasks, scanning object, interacting within the environment and levelling up, you begin to unlock tokens which can be attached to your clone, granting them boosts to attributes such as speed and jumping, as well as unlocking other characters which possess stronger and better abilities. This in turn creates more agility which leads to further exploration and advancement; and a more welcoming ease in to what needs to be achieved within the game. 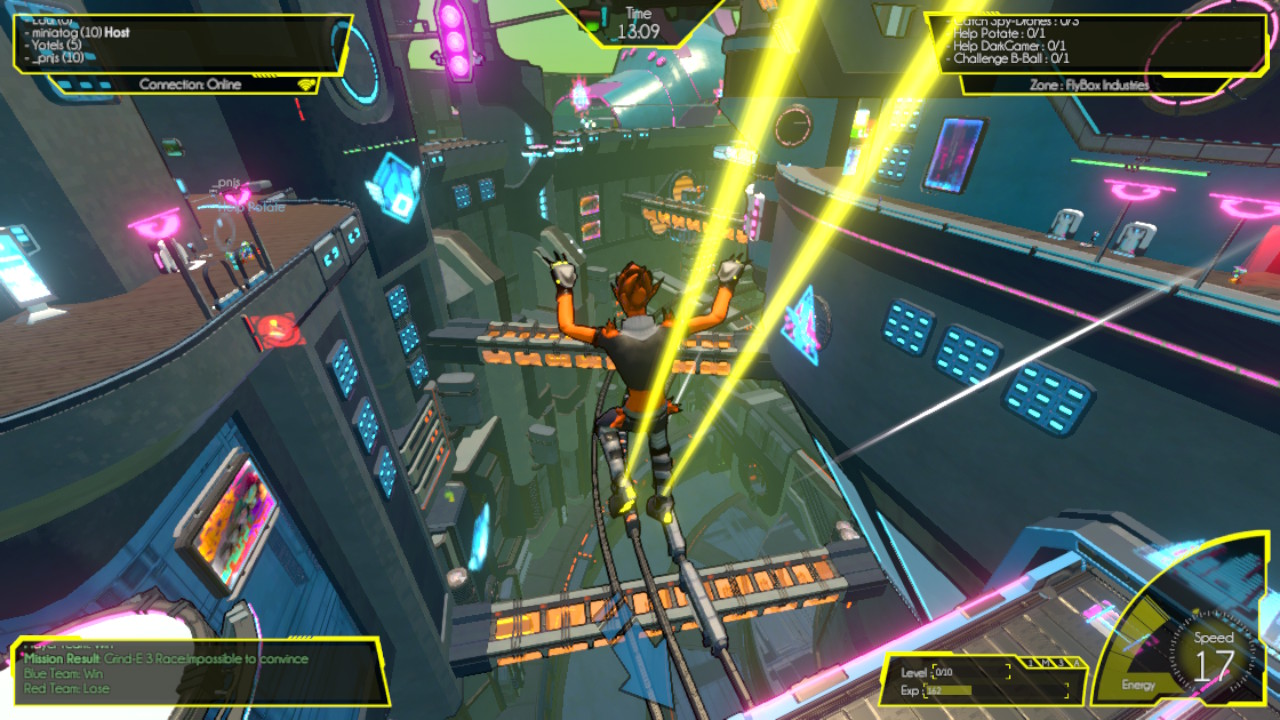 Another neat feature of the game, is its ability to drop in and out of online multiplayer, catering for up to fifteen other players to jump, grind and free-run within the city with you. Although this function is largely similar to the solo campaign, the experience of others in detailing where to find secret locations, environmental objects and task completions becomes a vital element in learning how to get the most out of the game. The ability to mingle amongst other players, challenge them and interact with them adds a nice layer to the game and helps in learning the basic and more detailed mechanics needed within the game. You can even play a mini-game of sorts, namely Gameball, a basketball style of game that can be played in both offline and online modes.

However, despite the bright neon lights of its environment and its free-flowing style of play, this isn’t a game that shines brightly in all of its elements and stutters at times with its playability. Although the main premise of the game involves a free-style form of agility, traversing the city’s landscapes can be frustrating at times; especially when starting out in the game. Jumping can feel floaty at times, often leading to mis-timed jumps and some checkpoints appear seemingly unreachable; plummeting you back down to the streets from the verticality of the city’s structure. However, the rewind mechanic does offer some respite, but it can also frustrate too in equal measures. Should you be carrying an object and trying to bring it to a certain location, falling too far or using the rewind function, forces you to drop the item, creating an ability that feels largely redundant in its execution. The difficulty in reaching certain areas or failing to land a jump can also lead to a disjointedness in the free-flowing style that the game is trying to promote. Saying that though, progression and exploration does eventually lead to a less frustrating experience in terms of these mechanics.

Overall. Hover is a fast-paced adrenaline ride through the bright lights of a neon-filled future. Although it may be difficult to grasp at first, the more you put into the game, the further it opens up and the easier it becomes to free-run, grind and flow around the city-scape. Finding challenges, completing objectives and basically progressing through the game brings a rewarding experience, one that unlocks further characters, upgrades existing ones and opens up new areas of the city and pushes the story of rising up against tyranny further. It’s far from perfect, but once you get past its initial frustrations, Hover opens up to become a thrilling and rewarding experience. This is further enhanced with a helpful, cross-play, community that you can drop-in and drop-out of at any time. It brings a touch of immersion as you and other gamers dart around the city fighting for the same cause; to rebel against the constraints of your virtual setting, creating a game that feels unique to you as break free from its boundaries.

Run, jump, grind and free-run through the neon lit streets of Hover City, in a game that eventually shines brightly with patience and agility.