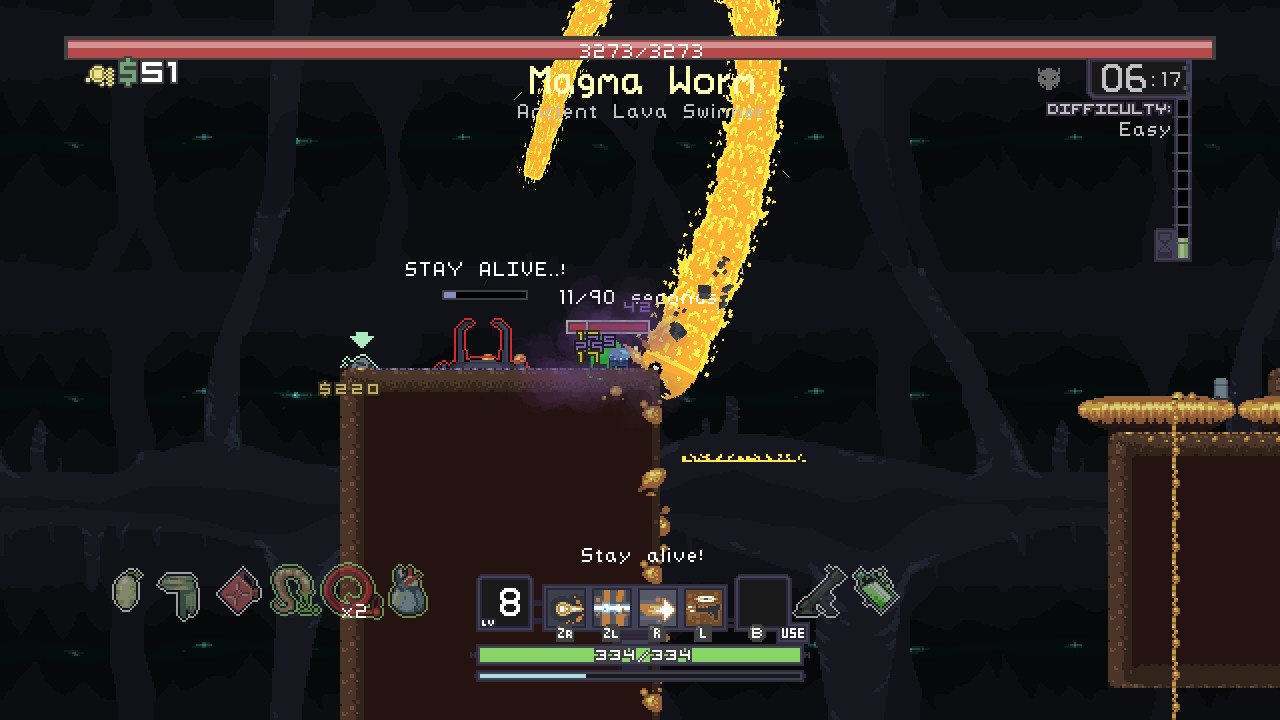 Every time I think I’ve seen the last thing that I need on the Switch, I get roped into craving something else. It’s an ever-growing fishbowl of possibilities and endless ideas that keeps drawing me back in and preventing me from saving cash to buy literally any other system. Mario Kart on the go: fantastic. LA Noire while I’m on a plane. Amazing. Getting friends into playing Jackbox Games without needing to invite them to my house. Even better, I hate having people go to my home. But roguelites…oh the roguelites. I’ve run out of fingers and toes to count on all the amazing, randomly/procedurally generated games that I’ve gotten onto this little machine, and it’s easy to see why. One, they have endless replay potential. Two, they generally have a tiny footprint: well under a gig for most, a handful under 300MB.  And three, they’re just damn fun. Having all the chaos in the world at your fingertips is such a rush, and, pound for pixel, there’s no greater example of hell breaking loose than Risk of Rain.

Risk of Rain is the simple story of a beautiful future where intergalactic travel by spaceships is fun and exciting, done by nearly everyone, and, oh look, your ship just crash landed. The only way back is to get the teleporter (you know, that old thing) up and running, but that’s been scattered somewhere on this alien planet. Go, find it, get it working, and get the hell out of here. The teleporter probably isn’t going to send you home, though: it might send you to another world that’s CLOSER, but still not where you want to be. So put on your running shoes and get moving: these worlds are inhabited by hostile, curious and hungry creatures. The longer you’re there, the more they notice you, and you know what they say: when it rains, it pours.

Risk of Rain is a tantalizing combination of sidescrolling adventure and metrovania with a good dash of roguelite shooting mixed in. Each stage, you and up to three other people have to get your butts to the teleporter, turn it on and get off the planet. Small problem: everything on the planet want to kill you, and they are gradually getting more aggressive. You start with a series of pretty decent weapons, and, as time goes on, the enemies you slaughter will give you EXP (level up to deal more damage) and money, which can be used to purchase goods or services. There’s items to buy, lucky chests to open, and drones to repair to do the dirty work for you. You have to make the judgement call of when to get out though, because the density of enemies increases in a dramatic and terrifying fashion, eventually spawning monsters second after second, some of them massive, protected and ready to murder you. Oh, and when you turn on the transporter, you have to wait a fixed amount of time before you can leave, and, during that time, a ginormous boss monster will appear, and you can’t leave until you kill it and every other monster that’s spawned since the timer started. 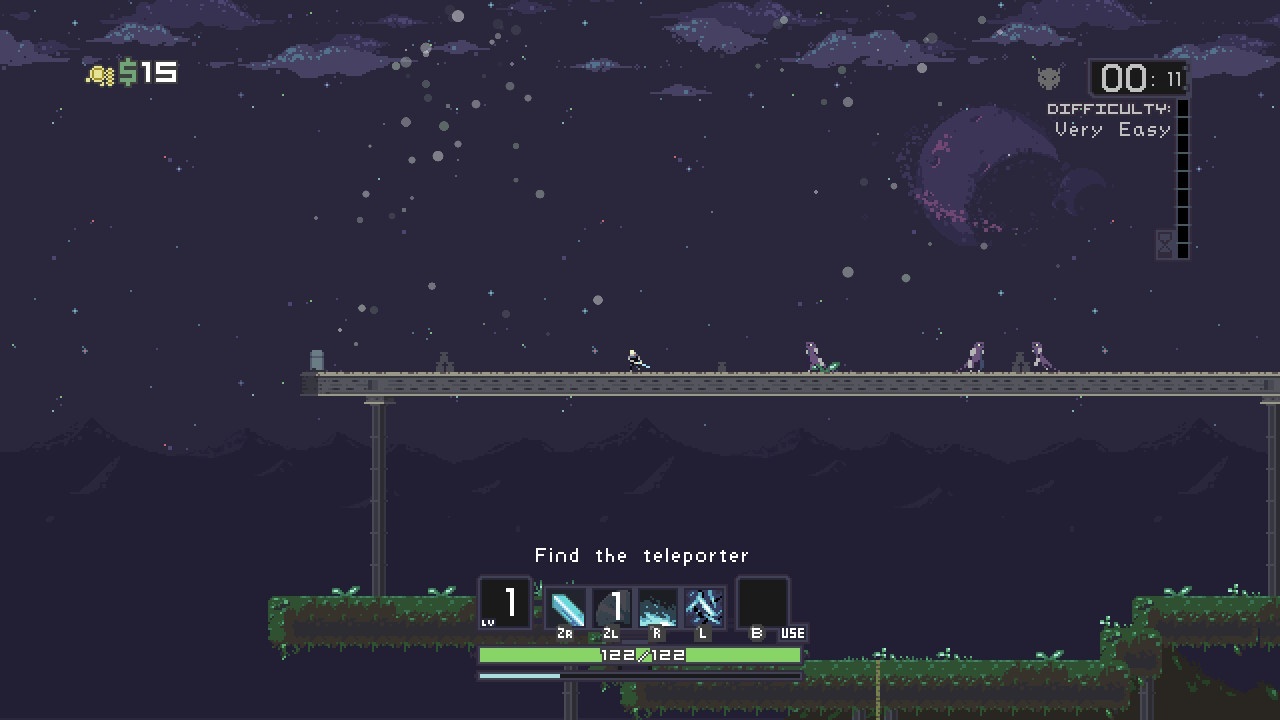 What’s really great about Risk of Rain is the unassuming presentation. Hopoo Games (a team of two students) put a ton of thought into the algorithm that measures the intensity of the invasion and how much/often gear drops, and they purposely made the game look simple and almost benign through some small pixel art. Hell, the first time I played it, I instantly underestimated the game, thinking something this small and simple looking couldn’t be that difficult. Four games later, I was practically screaming at the television every time an Elite Child spawned. The game is actually packed to the brim with fantastic enemy and set design, each creature distinctly different enough to notice when something with a good range would appear vs. something that was going to run up and punch you in the face. Additionally, the bosses are mesmerizing in their size and shape. Sure, Providence has presence (due to him being the final boss and all), but things like Ancient Wisp and the Cremator are almost alluring in terms of terror and detail. So what, your character is tiny: these things are magnificent and built to kill.

But the game pushes the envelope in terms of what can happen for the roguelite element. The number of replacement weapons, passive items and extra goodies are huge, and each have their own advantages and disadvantages. The War Banner was my favorite, especially when I realized it stacked, but then I realized I was just standing still and letting the aggression meter build higher than I was ready to deal with. I stepped outside my little bubble and got incinerated. Not that the War Banner mattered for one run, where I spawned maybe a screen and a half away from the teleporter, allowing me to get off the planet before even four minutes had passed (and getting an achievement as a result!). There are times where the game is going to lob things at you underhanded, giving you destructive forces and a clear path that the aliens don’t have a hope of competing against, even on higher difficulty levels. Then, there are times where you’ll be searching desperately for a way out, building a death parade behind you as you struggle and hide from incoming damage at every turn, praying that you’ll happen upon something to clear the air when it’s finally time to teleport, because there’s no way in hell you can get through things as you currently are. 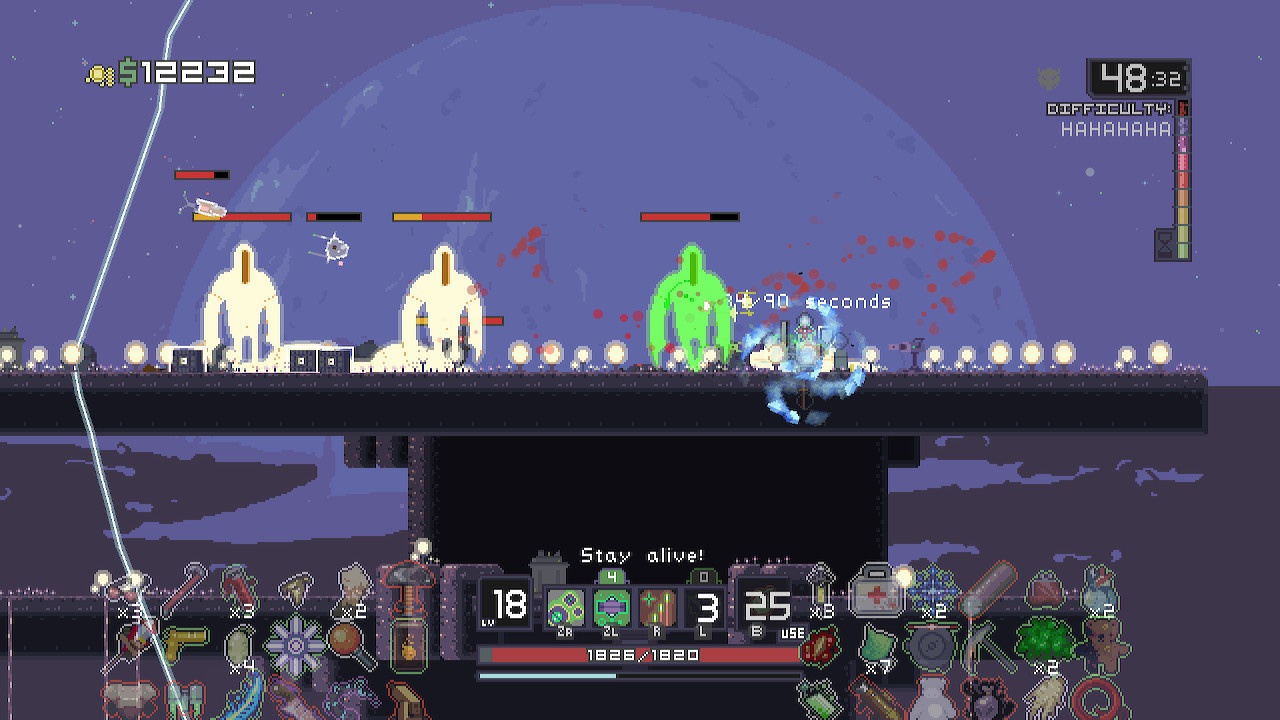 Not to mention the sheer number of unlockables. If you don’t like being the Commander, don’t worry: Risk of Rain has a bunch of additional characters to unlock, and most of them can be gotten on the easiest difficulty (aptly named Drizzle), some on the medium (Rainfall) and none, as far as I know, on the hardest (Monsoon). But, besides the characters, there are also artifacts to unlock: passive items that shape how the rest of your run will go that you can activate before beginning the game. A couple are pretty decent, like giving you 500% damage capabilities but dropping you to 10% health. Or one that makes everyone run faster as their health drops (everyone, including bosses). These are totally optional and meant to make things more interesting, just like you don’t HAVE to play as the Chef or HAN-D, but don’t you want to at least give it a try? Each character has a different skill set and approach to damage, separate from Commander. The Sniper is all about long-range damage, and Mercenary is the killing machine you’d imagine from the name. None of them are impossible to use, but each tailors itself better to a certain play style.

It wouldn’t be Risk of Rain if I didn’t mention the multiplayer aspect, and it’s clearly one of the great strengths of Risk of Rain (local and online available!). Although the algorithm changes with more players on the board, it’s sometimes just that much better to have fellow survivors carving their way through the alien menace with their own weapons. When you have a well-balanced team of someone running interference, a couple of people doing massive melee damage at one guy taking out people from a distance with fireworks, suddenly all the monsters in the world don’t seem like a big deal. But it’s never that simple (why would it be?). You gotta decide who gets what when treasure chests are opened, and there are several things that cannot be unlocked through the multiplayer run. So if you’re a completionist, you gotta suck it up and go at it alone at least a couple of times. Still, once you’ve got all your ducks in a row, why not get a couple of friends and get stuck in the Monsoon? There’s nothing better than being the one that found the way out when all of you are up to your eyeballs in undiluted hell.

Risk of Rain is such a fantastic get for the Nintendo Switch. Simple in concept, complex in execution, tiny in install size and flawless in execution. Though not everyone loves the roguelike influx that we’ve seen on the Switch, enamoured beyond words with the nonstop barrage, and Risk of Rain is definitely a huge flood of excitement and possibilities. If you have a few bucks and less than a gig of space, you need to strap in and get ready for some serious action, replay and immense enjoyment. Tut tut, looks like rain.

Sometimes it only takes one misstep to turn a simple shower into an utter flood. Risk of Rain rewards the fast and the lucky, and punishes the slow.