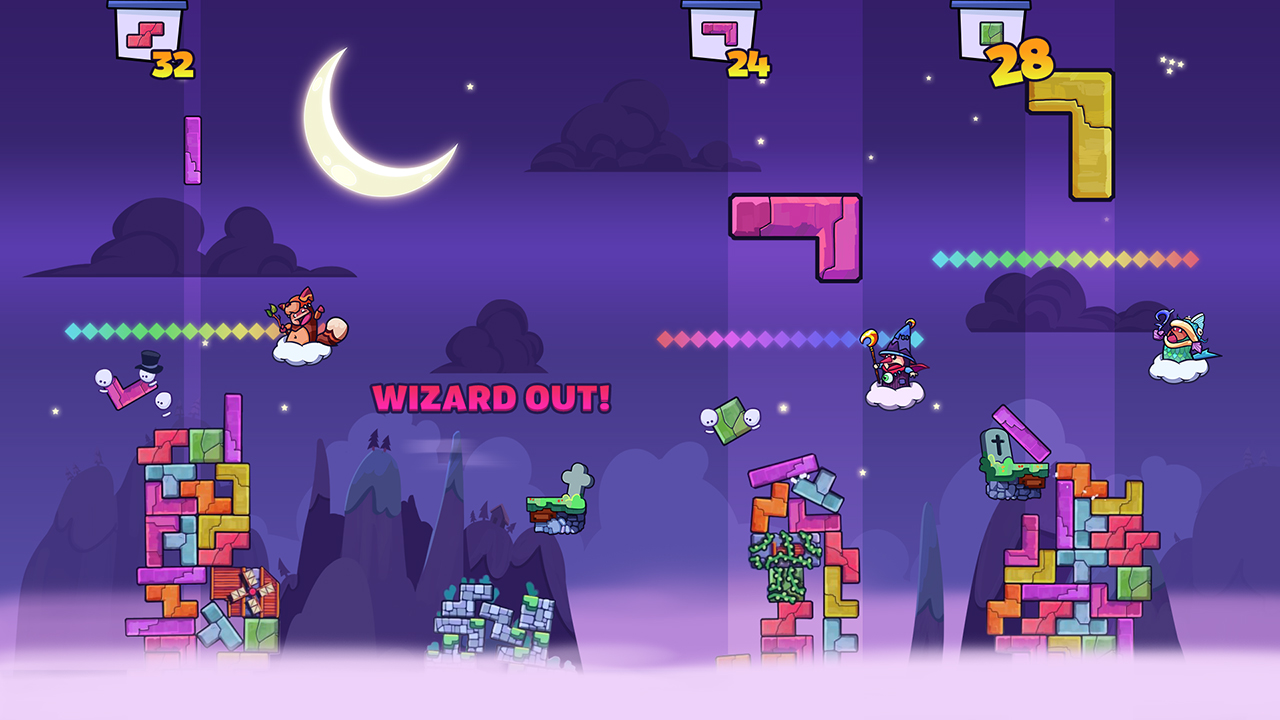 If, like me, you grew up with the Nintendo Gameboy, you’ll probably have fond memories of Tetris. In its time, it was a revolutionary game within the genre of puzzling. Its shape-fitting mechanics had a certain lure and addictive quality to it; let alone a catchy tune that I still hum to this day from time to time. It’s easy to say that since then, there haven’t been many other puzzle games that has drawn the same level of attention. However, thanks to SOEDESCO and Weird Beard, Tricky Towers has now built a release upon the Nintendo Switch, offering a tower-building puzzle game that runs in a very similar vein to the classical game of Tetris.

The basic premise of the game is to build a tower using a variety of blocked shapes, or Tetrominoes as they’re more commonly known. However, due to the introduction of a more physics-based mechanic, the need to build a solid footing is paramount; as placing your shapes in areas where they won’t fit can see your towering structure come crashing down. To help keep the formula fresh, Tricky Towers also boasts a variety of game modes, as well as the ability to play multiplayer; both locally and online for up to four players. However, to add further to the tactical and strategic elements of the gameplay, you can also select from a number of characters, each one possessing the ability to spell-cast magical effects that either hinder your opponents, or help you within your own cause.

For the single-player, there are two modes of play: Trials and Endless. Trials presents a number of levels, each of which contain a specific objective that needs to be met in order to overcome its challenge. These can range from simple timed races to build a tower to a specific height, building within a height limit with a set number of bricks to a survival mode that requires to build a tower, again, with a set number of bricks, but positioning your tetrominoes so that none of them topple off the base structure; lose one piece and you lose one life, lose three pieces and it’s game over. Endless mode is as it implies; simply building a tower to the highest proportions you can muster in pursuit of a high score. 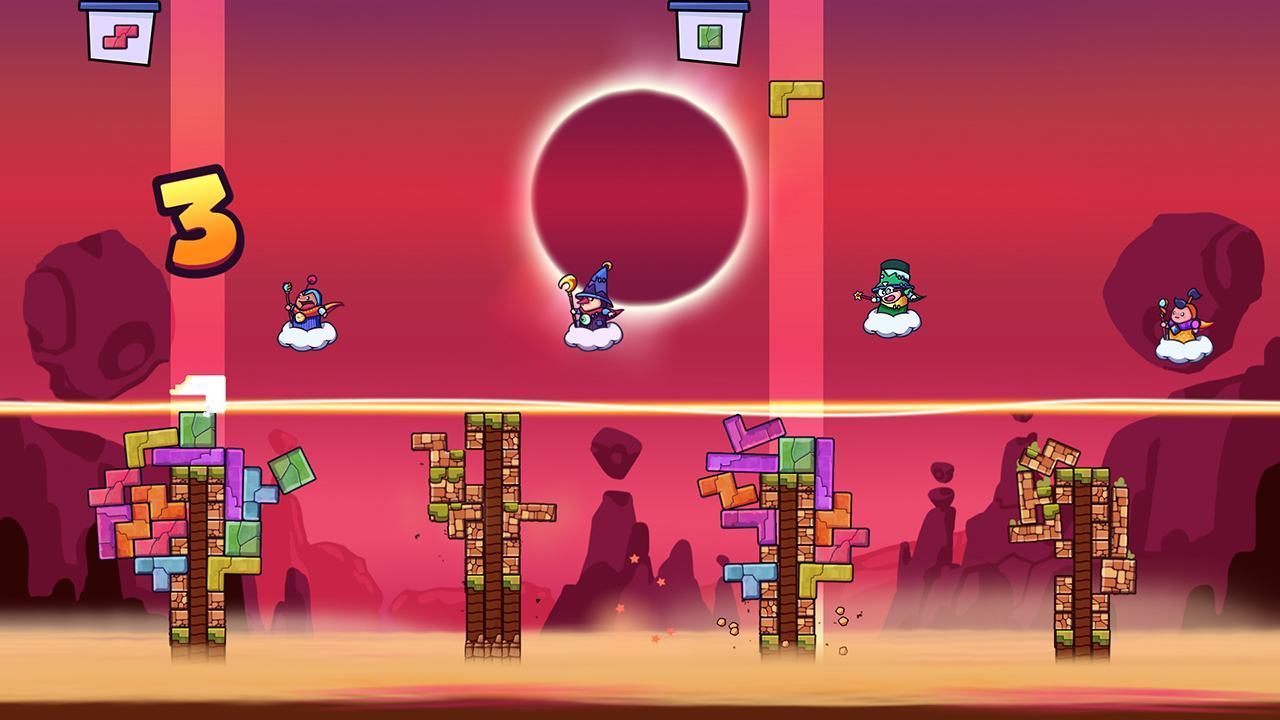 In terms of single player content, there is enough variety here to keep things fresh. However, its appeal soon wavers, making this a more casual affair for solo players. The reason for this is that the single-player campaign doesn’t hold the same level of tension as its multiplayer elements. Although the AI appears on-screen, it usually does so with an already completed tower and doesn’t really play with you. It seems that the AI’s main purpose is to try to hinder as much as possible, dealing countless spells that force you to rethink your strategy, yet your own powers of magical abilities are strangely redundant here. While it lasts, there is some good fun to be had here, but it just doesn’t have that same allure as playing competitively against human opponents, or even match the towering addictiveness of the original Tetris.

However, in its multiplayer capacity, Tricky Towers does fare a lot better. Whether you play locally or online, you can partake in a series of rounds over a cup competition, or just play single games that randomise with each round. There are three modes on offer here; each of which follow in the same style as the single-player modes, namely Race, Survival and Puzzle. There’s a more intense and strategic element to playing in multiplayer than that found in its single-player capacity. For starters, there’s the competitive edge, which although fun when playing online, really come to the fore in local play. As well as this, you also have the ability to use magical spells that either forces everyone else to re-think strategies, or help you in dominating the playing field.

The magical abilities come in two forms, either light or dark magic. Light spells focus on strengthening your structure with spells that can cement your shapes, producing a more solid structure to build upon or bricks that fit themselves to your tower. Dark magic, however, can create all manner of mayhem for your opponents, with the ability to produce super-sized bricks, shapes that can’t be rotated to fit and slippery surfaces that are difficult to bind to. These add an extra layer to the strategic values of the levels, which ultimately produces a much more satisfying level of gameplay when compared to the game’s single-player offerings. However, despite its offerings, it still lacks a certain something in its long-term appeal, although its multiplayer capacity does make for an ideal party or family game. 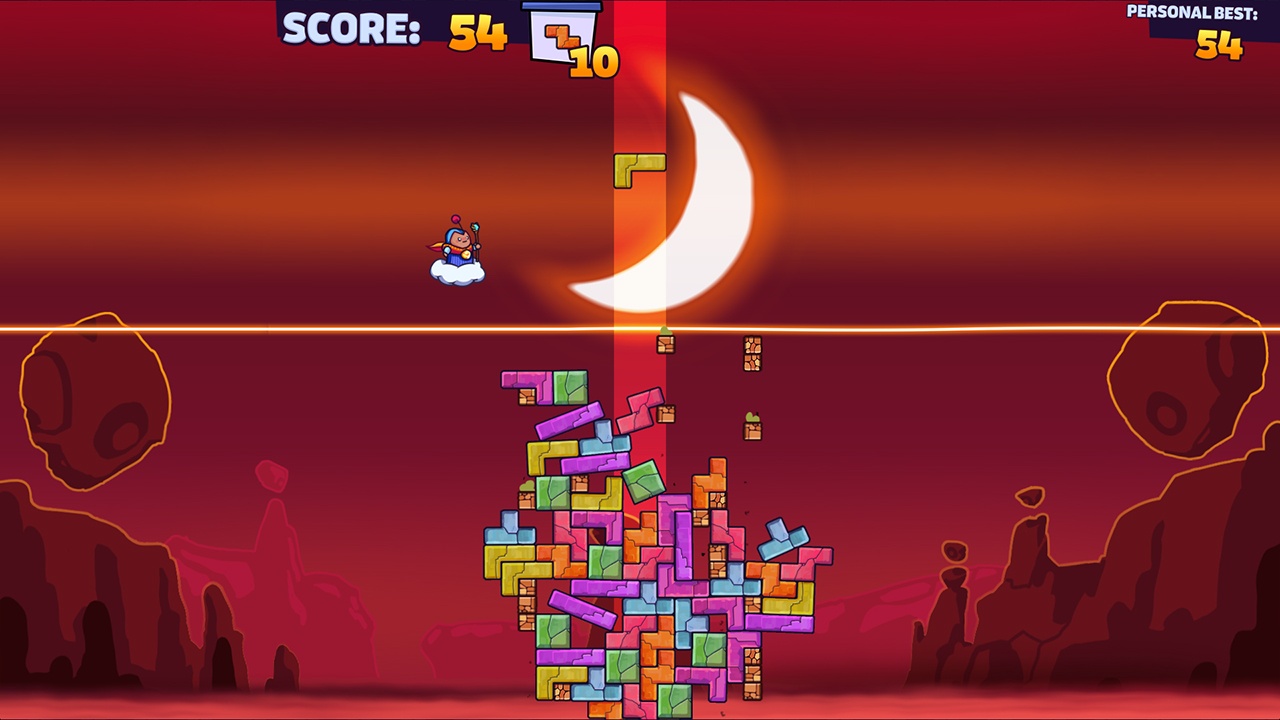 Presentation-wise, Tricky Towers contains a very appealing aesthetic, with bright and colourful graphics, easy to follow menus and options and a joyful soundtrack; although it by no means reaches the echelons of Tetris’ famous ballading. There’s a cutesy charm to this game, with likeable character models, fun-inducing magical spells and its sense of urgency in building the best, tallest and strongest tower with your blocks. Its control scheme is equally easy to get in to, with the B button rotating blocks, Y performing light magic and A creating dark. Block movement is controlled by the left thumbstick or D-pad and nudging is performed by the L and R shoulder buttons.

Overall, Tricky Towers that holds a lot of appeal with its pleasant puzzling and charming presentations. Although it contains a lot of content, both in terms of solo and multiplaying, it’s appeal is one that can soon wear thin. In solo, it’s a perfect casual game and in multiplayer, it’s an ideal party game. But over the long-term, I’m not convinced it contains enough gameplay mechanics to hold an investment in you. Which is a shame, as this is a game that undoubtedly offers a lot of fun, especially in its multiplayer capacity which, in all honesty, will be the go-to mode that I will be playing the most in future. It’s a game that’s ideal for any age, that’s easy to play, yet extremely challenging to master. All in all, it’s a fun game, but its content, variation and gameplay isn’t enough to build on to keep you fully invested over the long-term.

A game that towers in its multiplayer aspect, yet in single-player, simply comes crashing down.