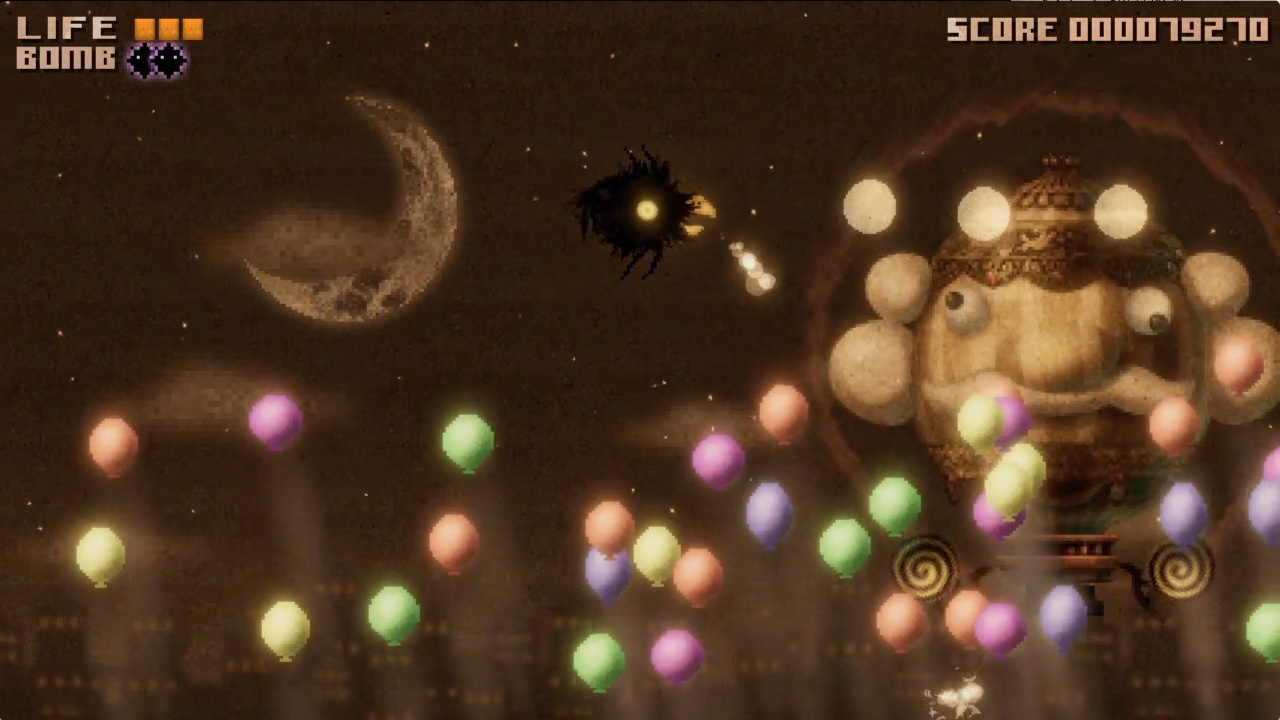 I truly, unabashedly love Japanese indie games. Indie games, in general, are a polarizing subject because they can either be the pinnacle of creative thinking and design or the worst showcasing of art. Japanese indie games aren’t any different, but the extremes that they can go to, always create some very interesting moments; regardless of overall presentation. For years, the Japanese indie game conference, BitSummit, has coaxed the average local indie devs (who are notoriously shy and hidden) to bring their titles to the populous and find that there is no shame in getting accolades and, yes, profit from their work. I mention BitSummit because it’s where I first encountered Onion Games many years ago, when they were featuring their offbeat mobile game Brave Yamada Kun. Their art and their style stuck with me, and I’m incredibly happy to review their new Switch release, BLACK BIRD.

BLACK BIRD is set somewhere in what looks like a Victorian England variant, where the upper class and the well-to-do simply pass over the wretched. One day, a young girl dies in the street: alone, dirty, and not a single person even pauses to check on her body. Her spirit, possibly consumed by the rage and indignity of it all, is reborn as the Black Bird, a vengeful being with a sole drive to destroy. Determined to get vengeance against the world, Black Bird travels through four different stages, consuming, killing, and growing ever larger, fueled by hate and the determination to right this wrong. It’s a love story, is what I’m trying to say.

BLACK BIRD is a shooter, against all odds, and the objective is simple: each level has a certain number of guard towers that dispatch soldiers to take you out. If you’re looking to simply move on as quickly as possible, you want to take out those towers, and this will activate the boss of the level. Destroy the boss and move onto the next level. Of course, simply following the mission objectives is never the right way to enjoy a game like this. You really want to explore the level a bit, take some time to see what details are locked in, and, oh yea, obliterate as many people as you can. Each person that the Black Bird shoots will drop a gem, and destroying strings of paratroopers or kinsmen will grant larger gems. Get enough gems to “level up” and mutate your Black Bird, growing larger, shooting bigger projectiles, and even developing a second, third and fourth mouth to shoot in multiple directions at once. There’s also a bomb mechanic which is the coolest damn thing that I’ve seen in a shooter. Rather than just explode the screen, the Black Bird becomes a screaming black hole of fury, absorbing and destroying everything around it for a couple of seconds. It makes the bomb both and offensive and defensive manoeuvre, depending on the screen density. 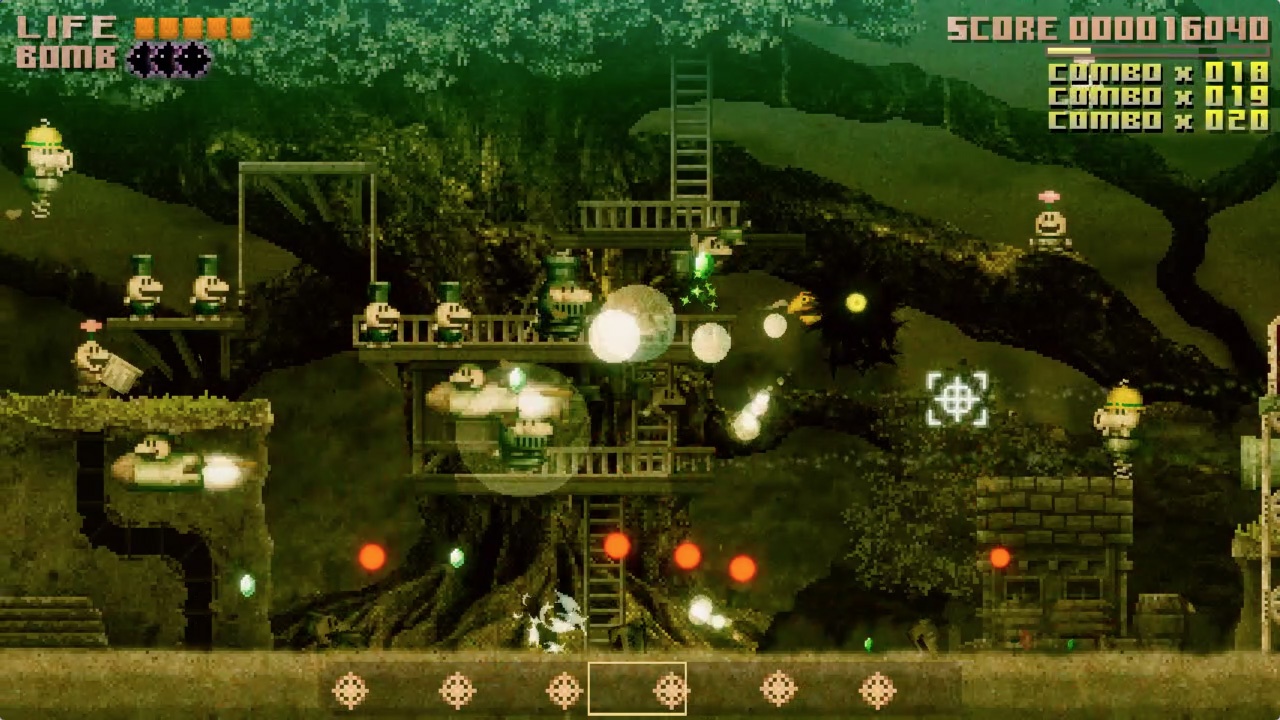 Now, as a horizontal shooter, BLACK BIRD takes things in some interesting directions in terms of gameplay and presentation. Not only are there the guard towers, but the endless scrolling stage allows for freedom in the how and why of attacking everything. There are a couple of levels where I honestly felt turning left instead of instinctively going right made all the difference. For example, at the beginning of the second stage, going right allows you to shoot down a single guard that’s ringing an alarm bell. Not only does this net you some bonus points (and show that there’s a dude hiding in the bell), but it stops the din which I honestly think influenced how quickly paratroopers appeared and how often the “elite” soldiers appeared. Oh yea, elite soldiers: each level will occasionally spawn extra strong, extra fast and extra accurate versions of the normal grunts that are being sent to take you out. They suck, and the teleporting ones in the fourth stage are honestly the worst things ever. The nice part is that you can still evade them for the most part.

BLACK BIRD does a few things exceptionally well. Firstly, the visual and musical presentation. From the screenshots, you can tell that my description of Victorian era makes sense, and it only gets better from there. Starting in a mud hole village and working your way into the inner sanctum of the powdered wig wearing noblemen, you see the Black Bird’s work is cut out, and it’s fascinating to watch how people respond and react. The third stage, which is done up in washed out neon lights and some train tracks (that occasionally produce very violent, but very gem-laden trains) shows that the world is oddly fractured, somewhere between steampunk technology and honest-to-goodness cutting edge robotics, all present on the globe that let a girl die in the street like a dog. It’s fascinating and infuriating at the same time, and only adds to the fuel of your mission. Along the way, the musical soundtrack swells and drives in an operatic fashion, with strings and chanting to give you the feeling of a bloody, unholy Valkyrie. It’s one of those things where you can play with the sound off, but you’re denying half the joy and thrill of the game by doing so.

BLACK BIRD also does itself one of the greatest services of all by making me care about a bullet-hell style game without spoon-feeding me why. The Touhou series might have one of the greatest danmaku setups of all time, but (and I’ve mentioned this before) it’s hard to get onboard with the lore of the game without serious reading and back history. This is one of the most straightforward setups imaginable: a dark being born out of neglect and sadness that manifests itself as a maelstrom. When I finally get to the “final” boss of the game (which I’ll mention in a second), I’m totally on board and driven to see this thing through so that I can finally rest and send the young girl’s soul off to the great field in the sky. And Onion Games does this all without massive exposition, reasoning or even word bubbles. You just see this from the beginning and know what you must do. 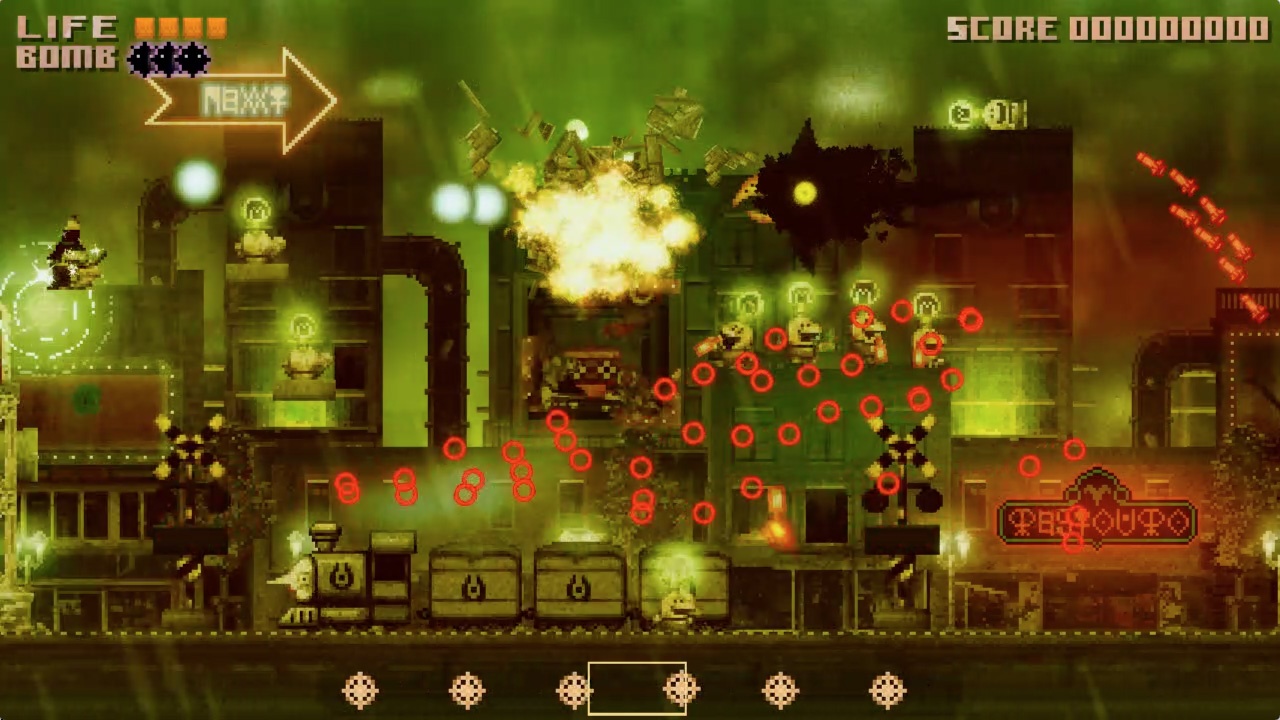 Now, BLACK BIRD does have a bit of a difficulty problem, at least in some regard to end game. Prior to reaching the final boss, you can play the first three and a half levels in a side scrolling blitz without worrying too much. You learn to dodge red projectiles, you learn not to run into the guard towers, and you learn to change the power ups that you find in jars to add life, bombs or speed to your bird (the speed maxes out after two upgrades, FYI). The bosses all have patterns, but they’re simple enough to follow: hell, as a longtime Binding of Isaac player, the second boss is basically Pride, but if he were a chicken. But that last boss – a three stage, straight up bullet-hell inspired nightmare – is a serious step up in challenge. It took me several tries to get him down, and it’s such a relief to finally do it, because that third stage is hell. Yet, once you finally do it…that’s when the game really begins.

BLACK BIRD’s “True Mode” gameplay is a hellscape, the likes of which I couldn’t have fathomed before. Everything and everyone is significantly harder, from the early soldiers now being able to fire arrows in every direction (previously they could only shoot straight) to the first boss now creating massive arcs of stars that are stupidly hard to dodge as he careens across the screen. Yet the game was also more interesting, with combos unlocking prizes and modes, the scores multiplying beyond my wildest dreams, and brand new, utterly bizarre cutscenes between the levels. There are hidden characters to find, new endings to discover, and a possible different fate for the young girl, and maybe all the young girls, who became Black Birds.

Onion Games has a fantastic and mesmerizing title on their hands with BLACK BIRD. It’s compelling, it’s crazy difficult, and it perfectly nails that sweet spot of game length and variety to keep players ready to come back and keep finding all the secrets. It’s not gonna be for everyone, but for the folk who want it, they’re going to LOVE this game. If you have any interest in shooters, you’re going to find something fascinating to keep you here in BLACK BIRD. As for me, I need to go back and find the other characters: I’m certain they’re around here somewhere, waiting for me…

Let the fuel of anger and revenge drive you to bold new heights and incredible scores in this twisted, dark and humorous shooter.