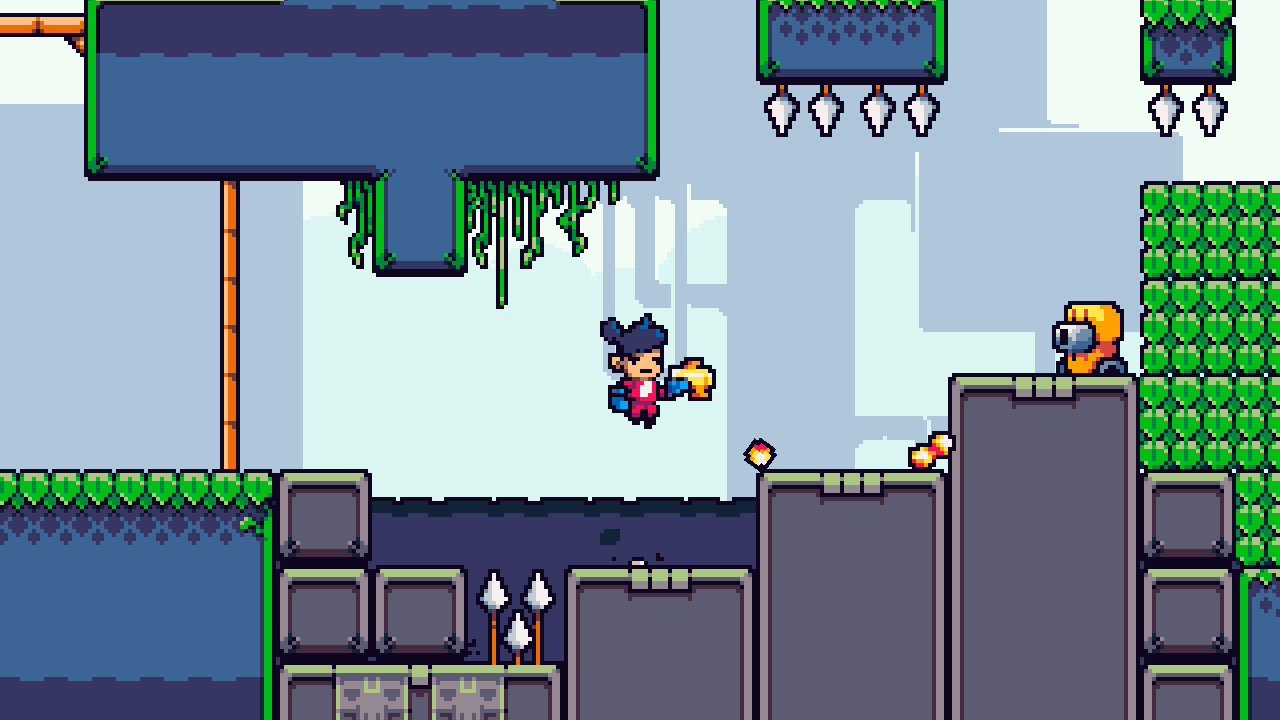 In the sea of hard and challenging games, short and sweet games are very much welcome. Mekabolt is one of such games, offering around an hour or two of simple platforming levels. While the style is arguably similar to what could be expected from a mobile game, it is nonetheless entertaining.

The set-up for the story is that the robots in the Mekapark have run amok because of the misplacement of the batteries for the control center. Playing as an unnamed heroine, assumedly the park’s mechanic, and armed with the Mekabolt gun, players will have to retrieve the batteries and restore peace to the park.

Mekabolt’s art style is a charmingly simple pixel art. While not excessively detailed, all assets used in the game are easily recognisable and unique. It is worth mentioning some enemy designs are a tad misleading, possibly leading players to jump on enemies which can still kill them. There is also a lot of asset reuse in the game, which is understandable because of its size, with traps and platforms remaining the same through the levels. 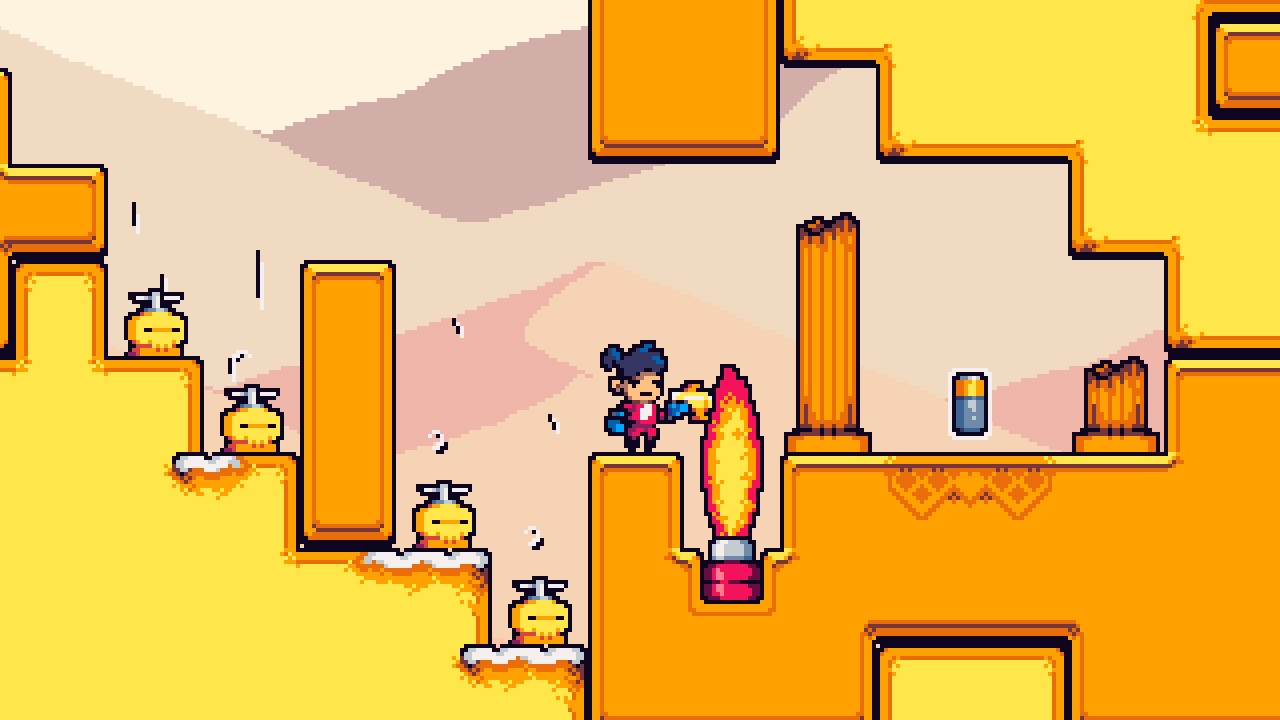 Similarly, sound is well designed without going too far. The soundtrack features a few different tracks in a delightful not-completely chiptune style which accompanies players throughout the whole game. SFX pretty good and definitely in style with the theme of the game, though they are nothing to write home about.

The gameplay is not particularly complex either, players can jump, move and shoot the Mekabolt. By shooting the different robots in the park they will be stunned for a time or disabled, allowing players to use them as platforms or ride them. There are exceptions to this rule though, such as a robot which only changes where it’s facing.

There are a few poor design decisions, such as the one previously mentioned about the enemies. Another example would be certain levels where the player is forced to manually restart after a mistake or the measly jump height. These don’t really hinder the gameplay particularly, though the game would’ve been better off without them. A few levels can become a tad bothersome, particularly those that require precise timing to shoot; luckily that is the worst the game has to offer, everything else is pretty good.

Somewhat related to the previous paragraph, a few of the levels are randomly incredibly short and simple. Surprisingly enough most of the harder levels are the longer ones that involve looping around or similar mechanics. This happens in every area without particular explanation, making the game’s difficulty a rollercoaster, albeit a small one since there’s nothing particularly hard. 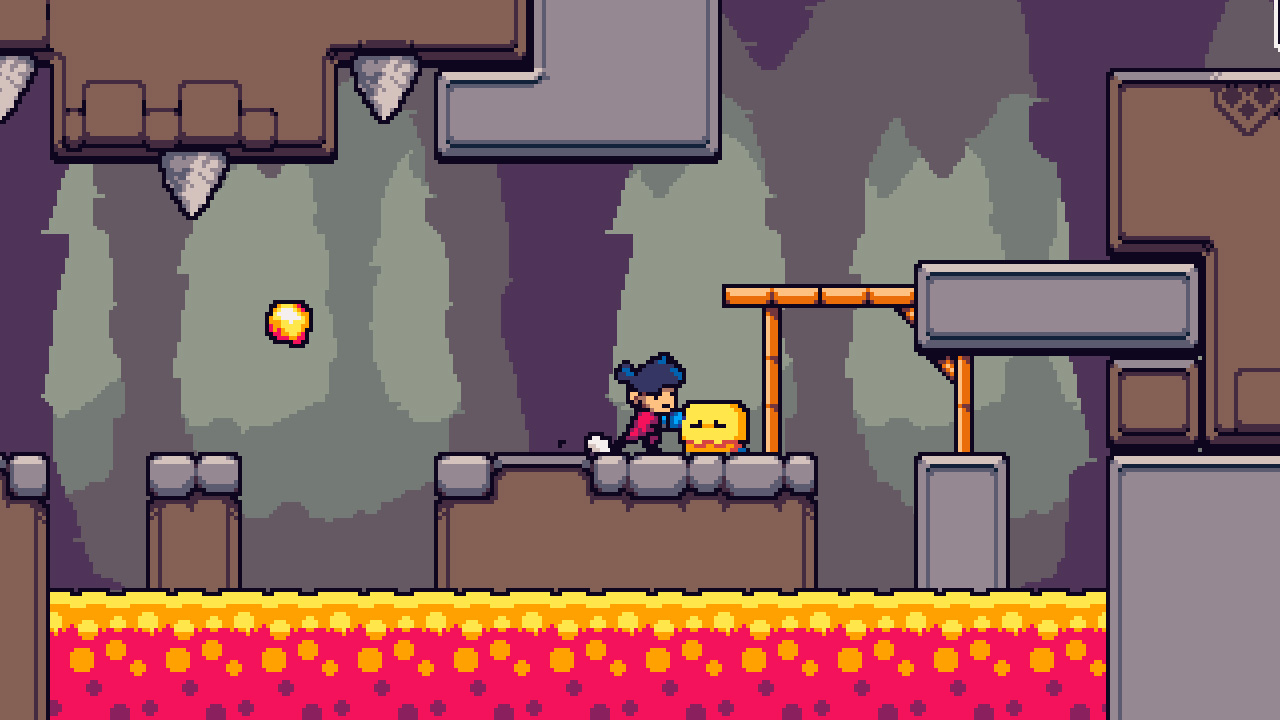 I personally found the length of the game a shame, after a few levels to lose the reflex of jumping on the enemy’s head I just breezed through it. It took me around an hour or so to beat everything, and the feeling I had at the end was the same as playing through a mobile game. It keeps you entertained for a while without requiring you to break your head to beat it and once it’s over, you’ll probably forget it. Nothing won nothing lost.

Overall Mekabolt is a pretty fine game, with an alright price tag of 5 bucks in any currency. It is not a waste to buy it at full price, though it’d probably be recommendable to wait for a sale. I personally would do so; there are other games of the same length for cheaper that I could buy. Ultimately Mekabolt is a nice time killer, not much more, which is perfectly fine coming from a one man indie game.

As a side note I’d like to mention more of the developer’s art and asset packs can be found at https://somepx.itch.io/ for those interested in checking it out.

Mekabolt is a short and sweet game for players who desire a break from harder stuff.