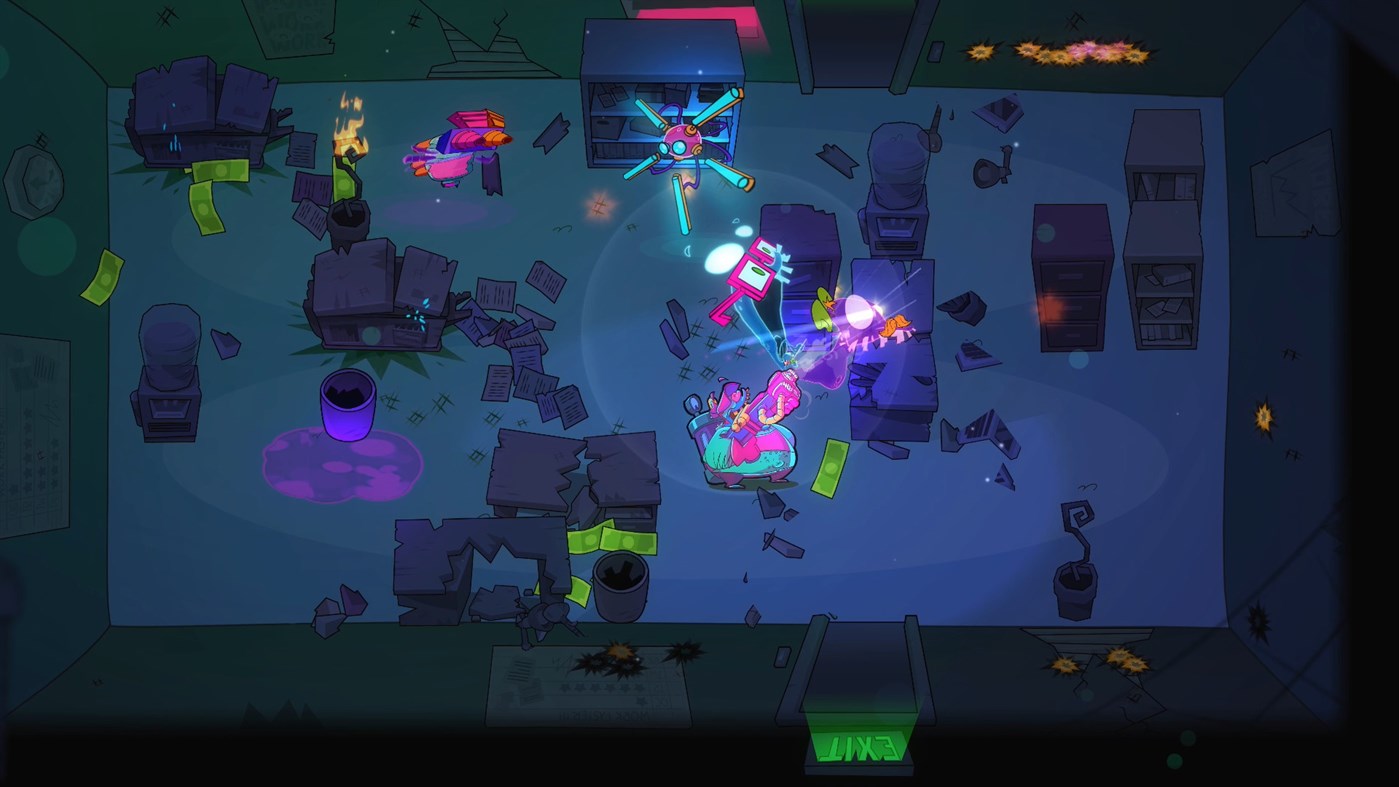 If there is ever a genre that I tend to ignore, it’s the twin stick shooter. This isn’t because it’s bad, or the gameplay isn’t worth investing your time in, no, it’s because I am usually terrible at them. I’ve attempted to play many over the years, and failed every time. Most recently I’ve tried Enter the Gungeon and Ruiner. Both are good indie titles, but I couldn’t get into them as I was truly terrible. When I was given the opportunity to play Dead End Job I was a little reluctant. Could I be fair to a game that I would probably fail at? I looked at some gameplay videos, and the trailer, and fell for its 90s cartoon style charms immediately. It was time to put on my big boy pants and strap myself in for what was likely to be a very bumpy ride.

Dead End Job is developed by Ant Workshop Limited, and published by Headup Games. It’s a procedurally generated twin stick shooter that’s as spooky as it is funny. You play the part of Hector Plasm, a Paranormal Pest Controller. He must bring his friend Beryl Ware back from the dead. The action spans across 5 stages, each has its own unique challenges and progressively more difficult ghosts to capture. You are armed with a plasma rifle, and a hoover. You must defeat all the spooks and suck them up in order to complete the job and earn much needed money.

I spent all my ghost hunting time playing solo, but if you have a friend who wishes to join in, then couch Co-op is an option. As a solo player, you control the games main protagonist Hector Plasm. He’s quite the sizable unit, and a bit simple. His ghost catching career has yet to take off, and therefore he is employed as a lowly 1 star worker. As you capture the undead you gain experience, which in turn gets you promoted. Promotion enables you to select from 1 of 3 random perks at a time. They add a variety of in-game boosts, and can massively increase, or decrease the game’s difficulty depending on which you choose. If you happen to lose your life to the undead that you are hunting, then you will get demoted. All your hard work will be undone, so take care. To help you battle through each job, random items can be found from shields, weapons and food. You can only carry 2 items at a time, and sometimes not everything is how it seems, so make your choices wisely.

The game opens with the option to select only 1 stage, you are introduced to a calendar which indicates that you have 30 days to complete your task. This can only be done by saving money and unlocking each further level. As you progress you encounter Louise, she is an engineer who builds a machine that will allow you to travel to the ghost dimensional world. From there you will rescue Berly, and all will be well.

Dead End Job is a cross between 90s cartoon Ren and Stimpy, and Nintendo’s Luigi’s Mansion. It’s comical and the relationship between all the main characters will make you laugh, especially the ever watchful T. Mann, he is your boss and he suspects that you are up to no good. This game has an extremely simple premise; capture ghosts, get promoted, complete the jobs, survive, and rescue Beryl. This is as casual as it gets, as each level can be tackled in a relatively short period of time. If you fancy leaving the game for a while, a handy notebook in the business HQ will remind you of all your perks and progress. 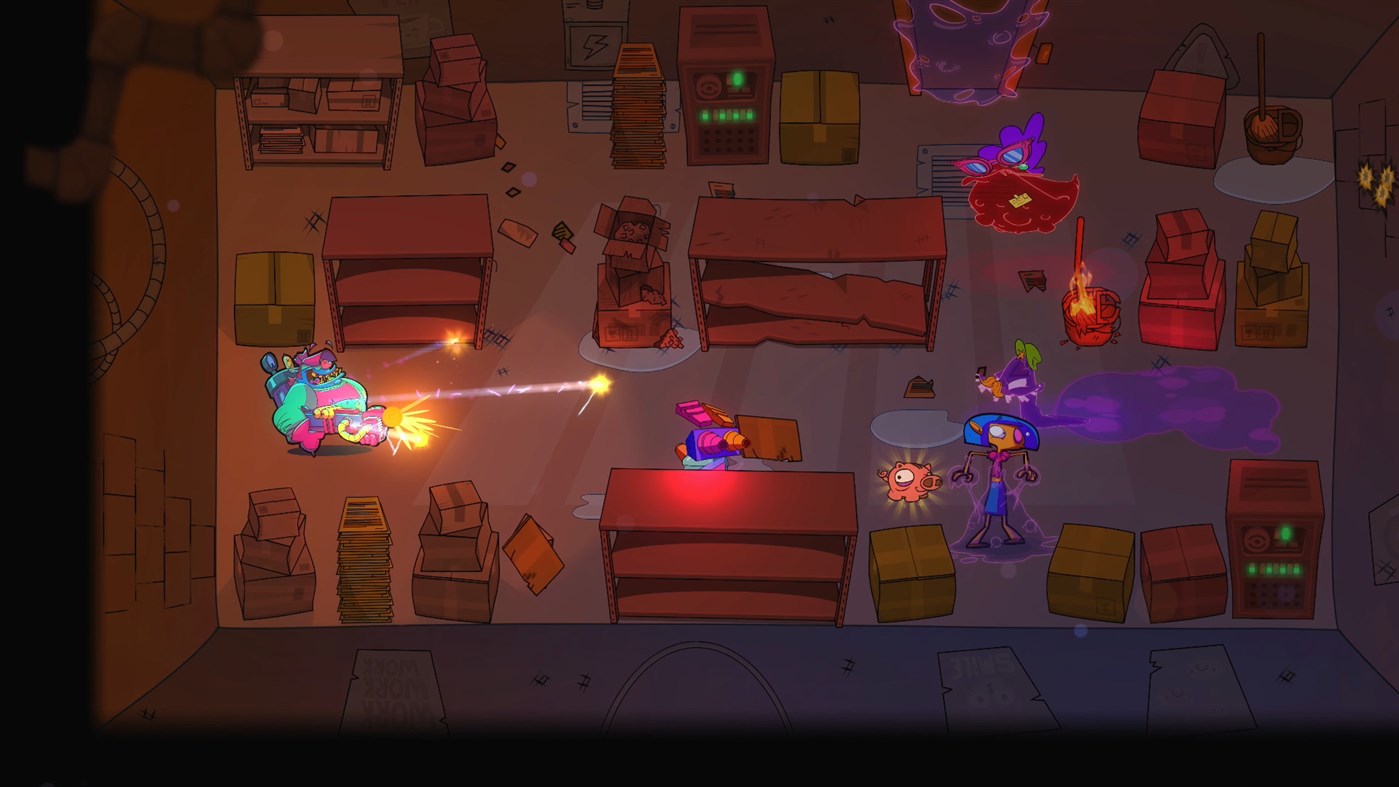 The action plays out in front of you from a table top perspective, everything is pretty fast paced, but it’s very easy to follow as there is little clutter on the screen to obscure your view. A small minimap identifies where you have explored, and makes navigating a level rather easy. As already mentioned, this has a very 90s cartoon feel, so as you would expect the colour palette is bright and vibrant. The character models are bold in design and well detailed. The ghosts all vary in looks and are easily identifiable. Each level is unique to its theme in both aesthetics and hazards. This ensured that the gameplay didn’t get old or repetitive. This was certainly helped by the procedurally generated algorithm, that ensured that no two levels were ever the same.

A large portion of the story is told through comic book-esque cutscenes. The visuals in these are always striking and well defined. Comedy was a key element, and one moment that stuck in my mind was when T. Mann told the group that he was always observing them, and had eyes like a hawk. The scene suddenly cuts to his face with Hawk eyes instead of his own. It made me chuckle more than it probably should have done, it certainly was amusing.

When you discover that the audio has been created by an award winner, namely Will Norton from the Grand Theft Auto series, then you know it shouldn’t go too far wrong. An upbeat jazz score is utilised throughout, its high tempo and strong sound work exceptionally well with both the theme and the genre. With the developers keen on pushing a humorous approach this certainly helped to emphasise the light-hearted nature of the game. The sound effects worked well with the eclectic mix of weird and wonderful items at your disposal, and the variety of noises from the different ghosts was a joy to listen to.

Now my nemesis in this style of games is always going to be the controls, my brain doesn’t appear to be able to comprehend them. I can state with great pleasure that this was a simple game to operate. After the first level I was able to walk around freely, and after a few stages I felt like I had played the genre for years, and didn’t know why I was so worried. A simple button layout added to the ease at which you can pick the game up and feel quietly confident and competent. 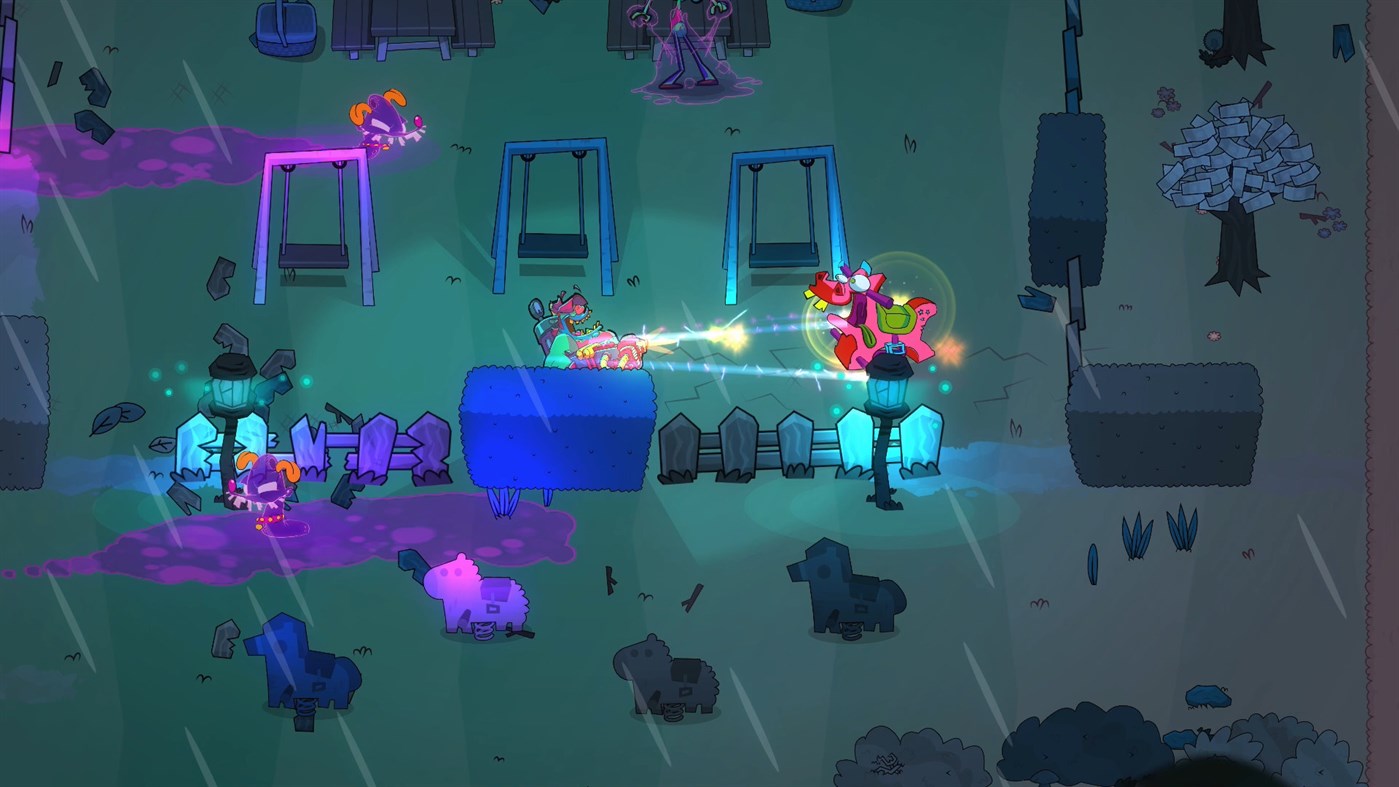 When a title uses the phrase procedurally generated most people jump to the conclusion, at least it won’t be negative, or that it’ll have plenty of replay value. Can either or these be said for Dead End Job? Absolutely. With only 30 days to complete a playthrough, and any mixture of ghosts to contend with, your approach will vary each time. Also with any random combination of perks and items added to the blend, you will be kept on your toes throughout. With a hearty helping of both easy and brutal achievements to obtain, this one isn’t going to be for the faint of heart. I have yet to hit the 100% mark, and I’m not entirely sure that I will be able to, as forgiving as the control system is, it doesn’t take away from the fact that I’m still pretty poor at the game. I reckon you’ll be looking at between 20 and 30 hours to achieve 100% completion, that tied in with the couch Co-op, and this is looking to be very good value at approximately £15. You really are getting a lot of action for your money.

Nearly every aspect of this title is enjoyable and positive, that is all but one in my opinion. The ghost spawn locations are random and frustrating. You can be busy fighting, and sucking away, all of a sudden one or more ghosts will spawn on you. This happened to me on a number of occasions, demotion was inevitable, as was the loss of all my perks. It’s a small thing, but in a game where death means the loss of all your character progression its infuriating, and in my opinion unbalanced.

A game that captures the humour and art style from one of my favourite 90’s cartoons, and the heart and soul of a much loved Nintendo franchise. Can this spooky ghost catching twin stick shooter take the gaming world by storm? I believe it can, its loud art style, upbeat original audio, simple game premise, and user friendly control setup tick an awful lot of boxes for me. A fairly challenging achievement list, matched up with a high replay value and only one drawback, this is a game worth investing; time, effort, and money into. Grab your plasma rifle and hoover, because without you, your ghostly friend is destined to remain in the ghostly dimensional World.

Capture all the ghosts to earn enough money to save your friend from a fate that’s worse than death. Eternity in the Ghostly Dimensional World is not an enjoyable existence.

Ghost spawn locations can be frustrating and unbalanced.