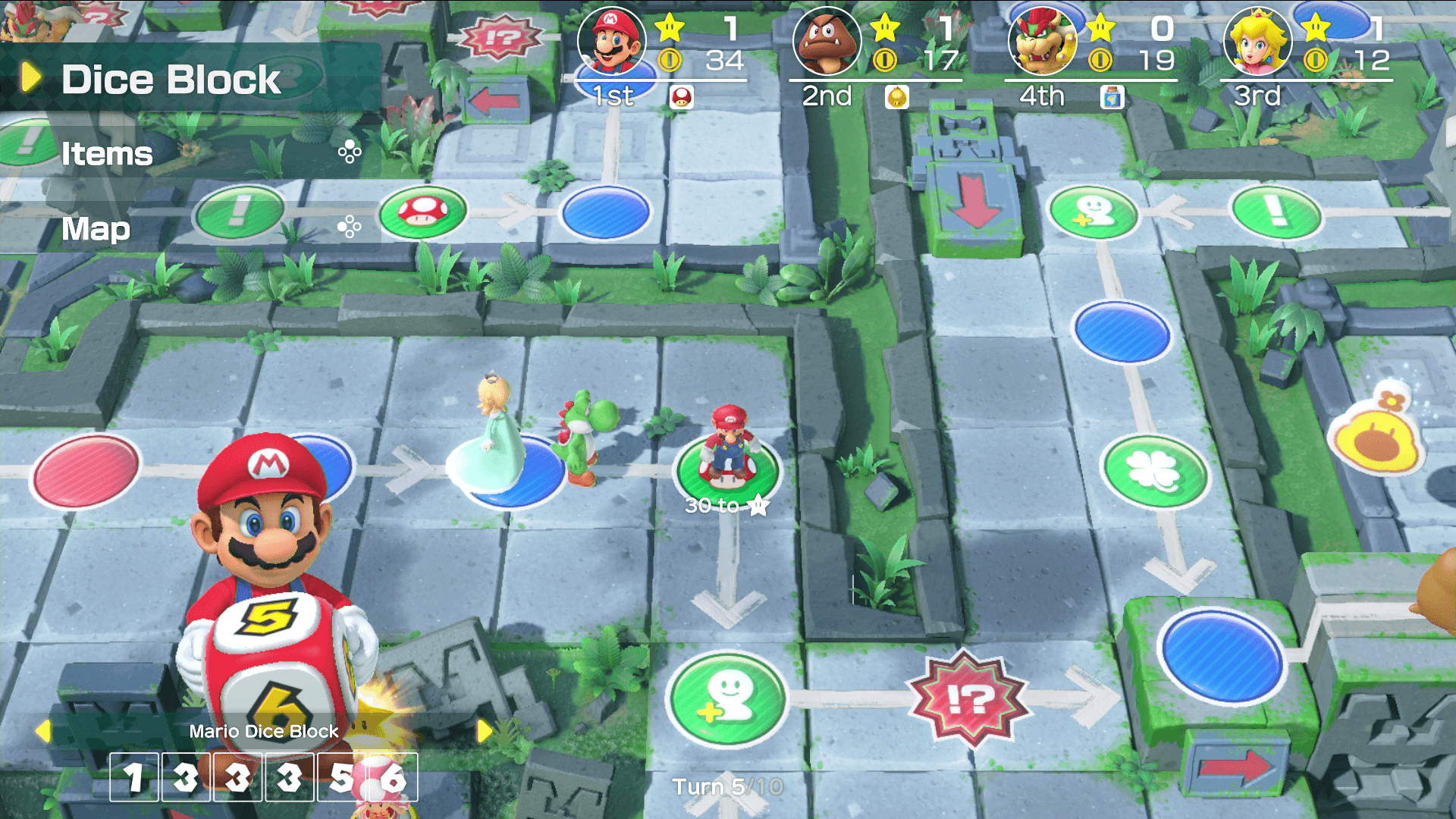 Mario Party is one of those franchises that never would have survived if they weren’t a direct arm of the Nintendo in-house publishing team. Let me clarify: this is one of those games that rose so high in public opinion and player interaction and then crashed SO HARD when they tripped. Many people laud the originals on the N64, and I politely disagree that those were the best: the GameCube titles, specifically five through seven, were top-notch, with number 8 for the Wii holding a special place in my heart for good motion control usage. The crazy board game, in which you got to be the great characters from the Mushroom Kingdom and compete in madcap mini games to win stars and take control, was a wonderful, frustrating, and occasionally rage-inducing time. Then, in an effort to reinvent the wheel, Mario Party 9 and 10 abandoned everything fun about the game, stuck people in a car, and made me really regret buying digital for the first time. No, had there not been a history of goodwill and deep pockets, the series would have perished by now. Thankfully, Nintendo doesn’t know when to quit, and thank goodness: Super Mario Party is one of the better ones, especially in recent memory.

For those unaware, the premise is simple: you play one of several iconic characters from the Mario games, including outlying bad guys, and compete on a game board to try to get Stars. Stars are usually purchased with coins, which you get by landing on spaces, winning games and occasionally finding in random events and hidden extras. Each turn culminates with a mini games that either is a free-for-all, teams of 2 or one versus three. Winning the game means getting more coins, and more coins means a better vantage to buy stars (and also coins are the second most important metric to determine the winner). The game ends with two bonus stars being given out, a change from the three in previous games, and the bonuses are usually based on the most or least of something (most number of red spaces landed on, least number of steps taken, etc.). Then the winner is crowned and everyone hates their friend who won, and then you have to just go on living. Fantastic.

If players are just coming into the game with their first title being Super Mario Party, they might be surprised at the lack of boards, and, trust me, you aren’t alone. If you only check out the standard group play mode, you will only see three boards currently available, four after you “unlock” it, and that might seem a tad scant. The boards do reuse certain elements, as well: the Whomps that block the pathways in the Ruins are holdovers from older games. To their credit, however, the boards are well constructed and scale appropriately to longer form games. Something that really struck me was Megafruit Paradise’s design and how it can quickly and easily turn into the most frustrating board, just like Pirate Land from way back in Mario Party 2. But when the game turns in your favor and you get those rolls in you can dominate in just a couple of turns, proving the age-old formula of Mario Party: skill is only relative to how lucky everyone else is. 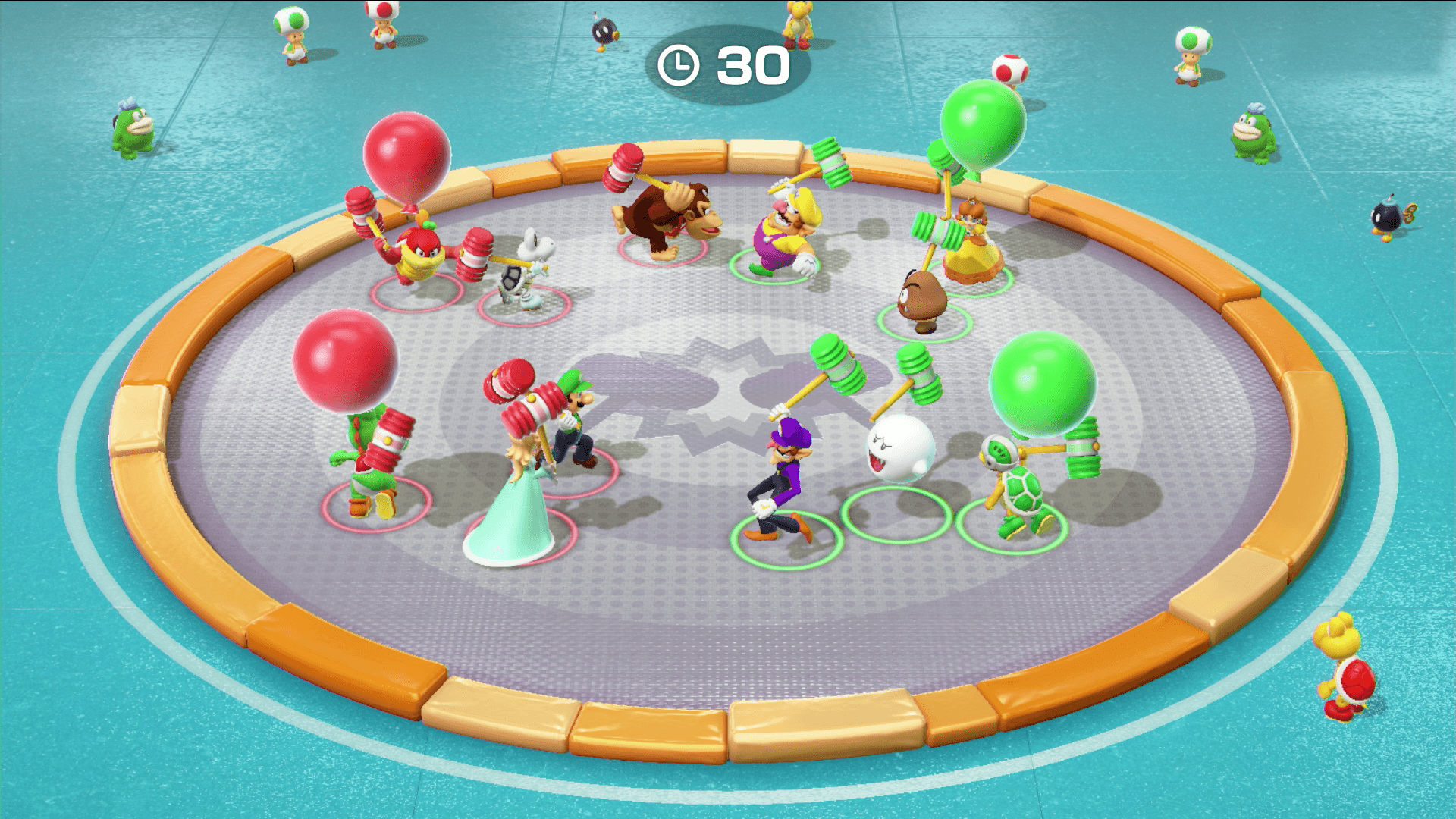 If you’ve got another person to play with, the co-op boards are four completely different setups that are genuinely a lot of fun with some small executional problems. The freeform movement is cool: you have to decide on your own pathway to get to the star, which can involve running in circles to burn off moves or taking weird, diagonal shortcuts to reduce overall move time. It’s pretty interesting, but it’s not for the player looking for short experiences due to the amount of strategy and thinking that go into it. Frankly, I’d prefer if there was an equal divide across the eight boards with options for co-op and single player on both ends. I really enjoy doing team matches with my wife or with my kids, and the co-op boards just ask for a significantly longer time investment in order to get those ten turns down. Not to mention that landing EXACTLY where Toadette is in order to get the star takes a certain amount of strategy that I don’t always have the patience for when I’m being followed by three Bom-Ombs pretending to be my allies.

Okay, the allies system is really awesome. Super Mario Party has rolled out this deal where, during the game modes, you’ll pick up an additional character to follow you around. Not only does this character add an arbitrary smaller role to your dice roll (usually 0-3), they also grant you use of their speciality dice to choose from. Oh, and, for certain mini games, your allies are additional members of your gaming team, meaning you can have a WICKED unfair advantage provided you’ve picked up a few helpers along the way.

That’s the other thing! The dice: each character has a specific die now that they can use in place of the traditional 1-6. Boo, for example, can potentially roll up to a seven, but 1 and 2 have been replaced by -2 coins. There’s this whole new approach with risk and reward in simply moving that doesn’t involve taking a ton of coins to the shop (Flutter runs the register this time around). If you do decide to buy, you can still get things like mushrooms to automatically add extra moves, a custom die that doesn’t slow down but just lets you DECIDE what number, and the infamous golden pipe that’ll warp you straight to the star.

AI is kind of all over the place in Super Mario Party, and I mean that in a decent way. Easy is gone: you’ve got normal, hard and very hard. Normal feels pretty good in terms of decision and mini game competition, but they still make bizarre decisions. That golden pipe that I mentioned before will languish in inventories of AI players for a long, long time before they eventually decide to use it, if ever. I’ll never understand the strategy of not buying a star when they land at Toadette, but it didn’t happen often, thankfully (but it did happen). The AI also seem to intrinsically know when they’re working with another CPU player versus working with a human. They naturally gel together better during team games than when I’m paired up with them, and I’m halfway convinced they were trying to lose so I would too. But, if you’ve played a single Mario Party game previously, you should be able to come in on “hard” and adjust to the newer mechanics and spaces. 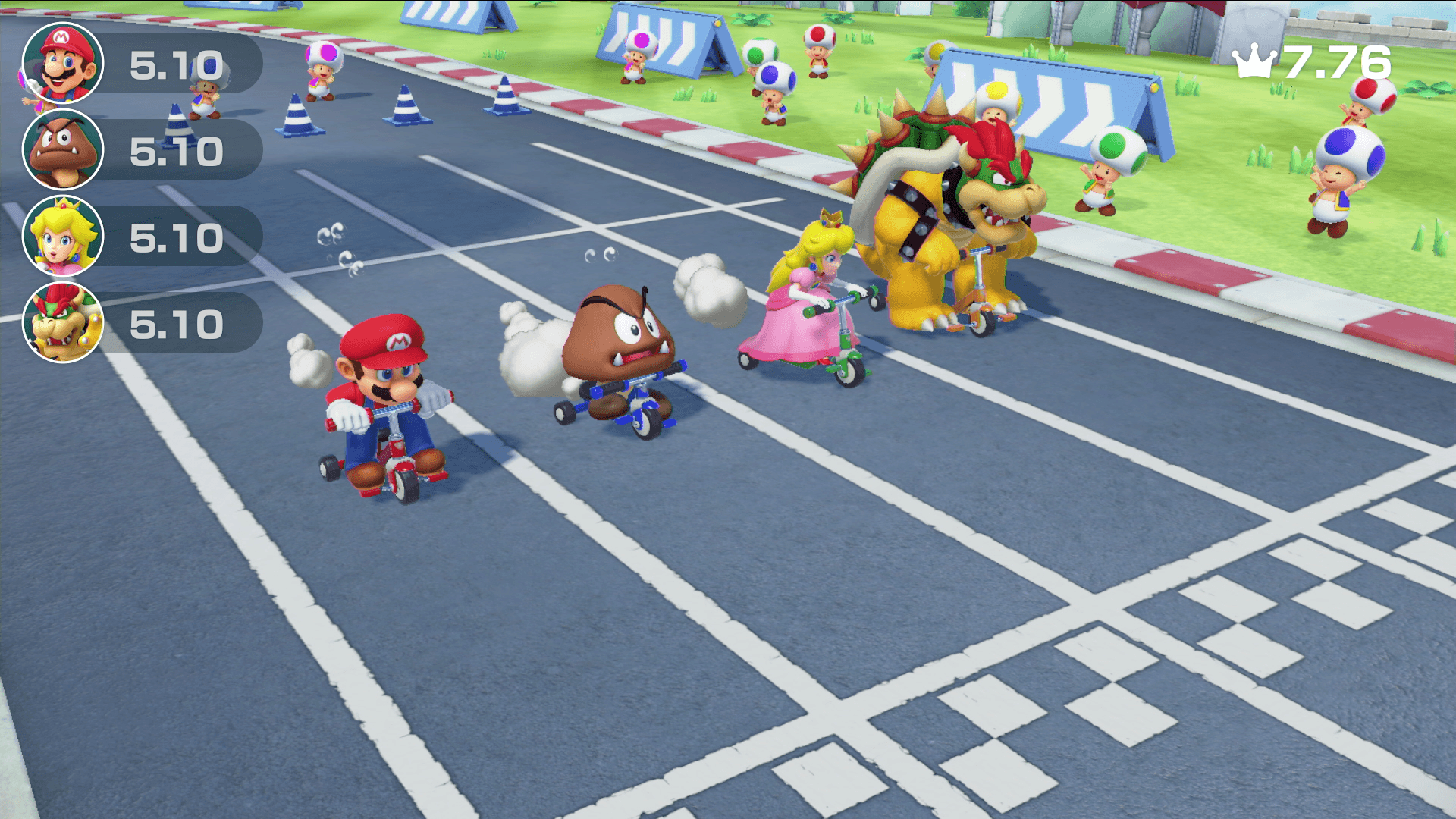 At the center of it all are the mini games, and this is where Super Mario Party has really knocked it out of the park. First, all new games. Love it, great approach, very smart after the relatively recent release of the 3DS Mario Party: Top 100. Nintendo has gone out of their way to make sure the JoyCons are utilized in a variety of fashions, from swinging to pumping to mix and match of buttons and joystick pressing. Hold it vertically, hold it horizontally, you can’t lose, and they’ve wisely made it so the JoyCon is really the only ticket in town to enjoy the games. Fans might be mildly upset they can’t swing their Pro Controller like weirdos in order to spray a distant flower with water, but Nintendo has every right to capitalize on their controller design and make it proprietary in order to play the mini games. The one versus three still stand out as the top, giving arrogant players a chance to show off their skills and humble players an opportunity to band together and knock Chris the hell out. Then giving a group high-five at the end to grab some coins is always welcome. OH, and the practice! I don’t need to hit a separate button and go into a weird pseudo game in order to practice, I can do it right from the loading screen and then everyone needs to confirm they’re ready. Thank you, Nintendo, this model totally makes sense!

And, lastly, the overall look and feel of the game. This is seriously the Mario Party experience that I’ve been missing for over a decade now. When Mario Party 8 was published and the development team broke up afterwards, I was worried we’d never see another Mario Party. When 9 was announced, I was elated, and, when I saw that car, I was…cautious. Playing 9 and 10 were such a chore, but I put on a fake smile because I sincerely wanted to like a Mario Party game. I don’t have to pretend with Super Mario Party. It sounds, feels and legitimately presents like a real Mario Party game. You’ve got the massive plaza with all the different game modes, characters to unlock, points to accumulate and a wide assortment of people to choose from. I’m sad that I can’t be Toad, but Monty Mole is a fun replacement even if his die sucks. The footprint on the game is tiny, coming in at under 3GB, and it loads up in a split second. I can’t wait to get a second copy for my wife so we can do those awesome looking side-by-side matches that require two Switches and some kind of black magic. Hell, I’m most excited that I might finally be able to let my WiiU retire since I have a Mario Party that’s worth playing and that was one of the last titles that I needed on the last generation system.

People who are upset about the lack of content literally looked at the first couple of seconds and declared foul because everything wasn’t unlocked and lined up for them at the beginning. The truth of the matter is, this is a new generation of Nintendo, where they can plan out things for the future and we might see new options on the horizon. With the success of Super Mario Party (1.5 million installs worldwide!) the likelihood of additional boards and mini games is a reality, and the chance that they might be free is…well, a little too grandiose, but not impossible. But Nintendo can add more to their games, and it’s been a working model for a while new. I welcome Super Mario Party to the family, and can say, honestly, this is the Mario Party that we’ve all been waiting for.

I don’t know where the car went, and I frankly don’t care: Mario Party gets back to its roots, and it’s a wonderful feeling.