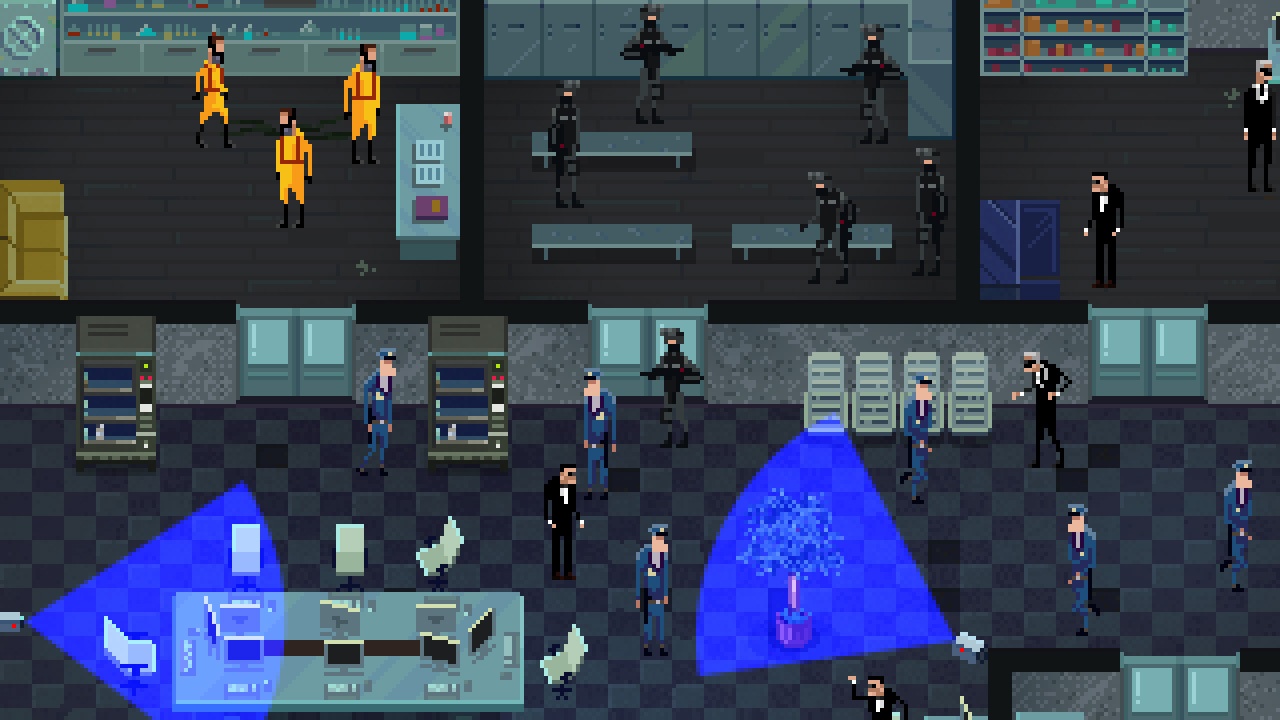 In my previous review of Party Hard for the Nintendo Switch, I failed to mention a bit of important information for would-be players and purchasers of the games: the different flavors. The standard version of Party Hard, or “vanilla” as one might call it, comes with the base game, the Van Helsing-inspired Dark Castle level (which is simply monstrous), and all the new bells and whistles of the upgraded, improved game that takes cues from the different ports and tweaks that Pinokl has made over the years. However, there is a Deluxe version that specifically comes with the High Crimes DLC, something that got glossed over as almost an afterthought in the last writeup. Well, I’ve realized my misstep and come back to speak directly about High Crimes, as that is the main incentive for the Party Hard Deluxe package.

High Crimes is a direct followup to the main character’s story in Party Hard, but the levels can be played with any characters you may have unlocked. In High Crimes, Darius (the name of the main killer, surprisingly), is working his best to not go on another killing spree, given that a decade has passed and things have been low-key. However, a corrupt police force is spreading crime and injustice throughout the city, and that simply will not stand. Though this DLC is only four levels long, its purpose – to add some additional insight and closure into the killer’s complex personality – is pretty interesting for fans of the lore. But, most importantly, High Crimes is responsible for some truly fantastic gameplay. 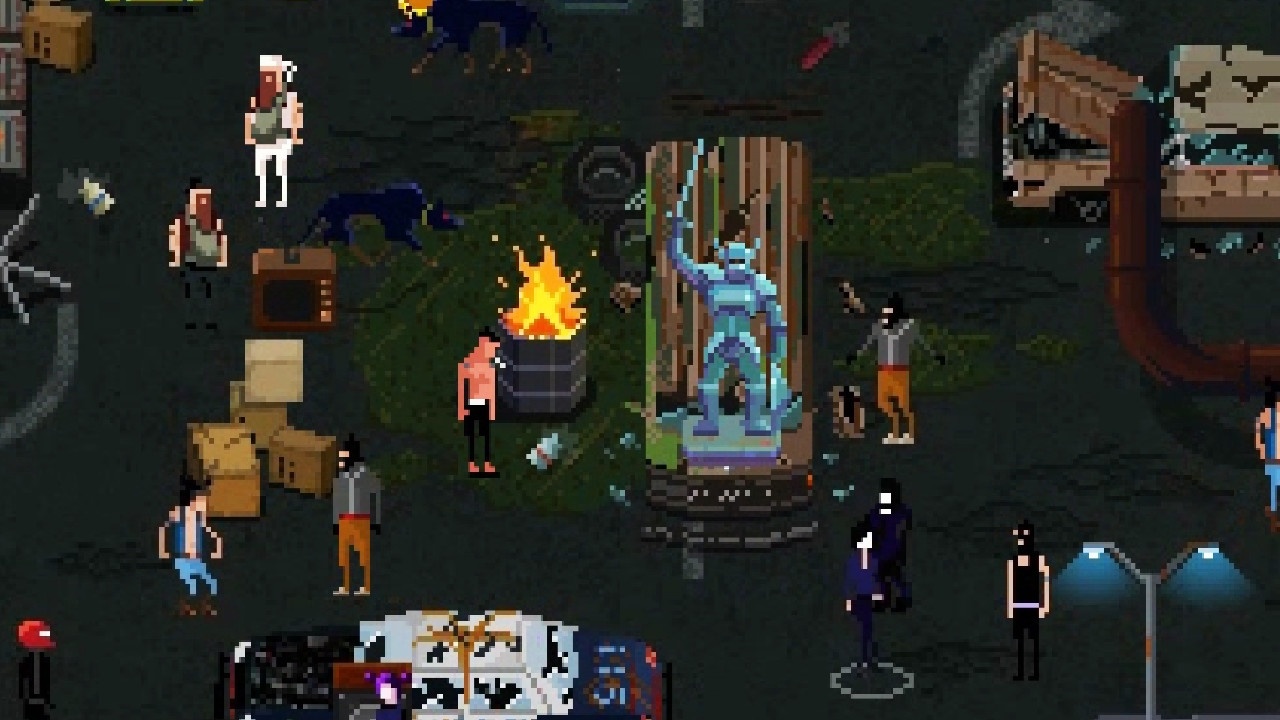 A lot of the elements that players enjoy in the core game were augmented, improved and introduced in the High Crimes arena. Every time you’ve picked up the phone and had a randomized character appear, from an arms dealer to a bodyguard to the CIA, is a feature that was dropped into High Crimes. These levels are much larger and a couple sprawl and scroll, something we see in the Dark Castle level and, most importantly, allows for the mobile action of Party Hard to work on the Switch. The levels aren’t totally original, however: the slower gameplay of them all feels heavily inspired by the Miami level of the original Party Hard, in which you had to assume the mantle of another character and simply couldn’t brute force your way through body after body. Let it be known: High Crimes is crazy hard.

Now, I don’t want to throw a wrench into anyone’s plans to grab the game, especially if they’ve already had a tough time with the core levels, but let’s be totally clear that High Crimes should not be the first pool you take a dip into. The game itself is already a complex one: being able to kill people with tons of witnesses around and not get caught or even noticed is a hefty order. In High Crimes, the designs and the mechanics take things up a significant notch. There’s a junkyard dog in the first level who cannot be killed, is naturally faster than you, and is guarding a couple of precious would-be victims. It requires precision, timing and a fair amount of luck to get things just right and get the kills down before the dog assaults you. There’s a MASSIVE level that’s equal parts factory, office buildings and adult film set that’s simply crawling with bodyguards who’ll end you in record time. There’s a rave party that you need to imbed yourself into, but not before powering up a scaffolding to climb the building (which is almost like a hilarious stealth mission). Lastly, there’s a level inside a damn police station where about half the victims are cops, which means you CANNOT stab them dead on: you gotta rig and use every trap imaginable in order to make it look like a ton of accidents took place. 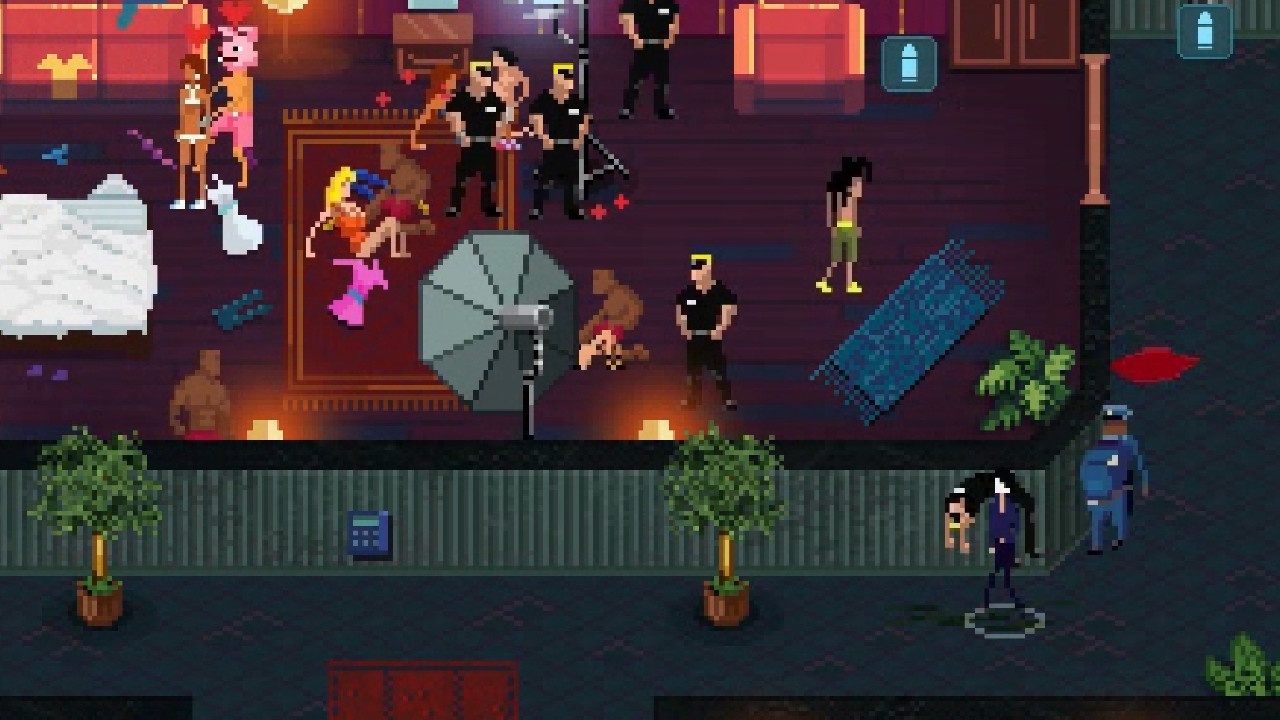 The High Crimes DLC is a bit intimidating due to the need for you to be a serious murderer in order to enjoy and accomplish each and every one of these four stages. Moreover, the biggest thing that comes into play is patience. There always comes this point in the previous stages where you can essentially enter berserker mode and hedge your bets that you can kill enough people before the cops successfully arrive. That’s not the case in High Crimes. People who get stabby and start to lose their cool almost always get taken down, if not by the cops then by someone else. The entire police station level is just an exercise in incredible self-moderation, as you end up using the hide mechanic (ducking into lockers and closets) more than when I played Hello Neighbor. As a result, however, the satisfaction of execution is even greater than the core game: I never felt like I lucked into kills, like when the police are called and a cruiser accidentally runs over eight people. With this, every explosion, every poisoning, every falling bookshelf was a work of careful planning, some coaxing and, well, a tiny bit of luck that it worked before someone found and killed me.

Graphically and aurally, there’s no distinction between this DLC and the rest of the game. Whereas Dark Castle specifically implements new sprites, mechanics and characters simply meant for that one massive level, High Crimes is wonderfully interchangeable with all the other places to visit and settle scores. In fact, there’s almost something grimly enjoyable about the huge ramp in difficulty to go from something like the BBQ Party, where people practically run into your knife, to the Techno Party level where everything is open air and there’s nowhere to really hide. There’s a great use of the pixel density to make the characters stand apart while you’re practically drowning in a sea of people, and the bumping music continues to capture the element of the dying 80s even as the NPCs die.

The final take away from Party Hard: High Crimes is a double element of interest and timing. If you love Party Hard and have committed to buy it for the Switch, it’s absolutely worth the extra couple of bucks to buy High Crimes in the Deluxe package and save yourself money later on. If you haven’t played Party Hard before but are super intrigued, then get the Deluxe: just having everything together makes for a cleaner setup for everyone. The only reason I would go against buying the game is if you truly aren’t interested in challenging levels OR you messed up and already bought the base game sans DLC. In that case, you might want to wait for a sale: five bucks for four levels, though content rich, is still a bit steep. But, if you’re waiting to pull the trigger from the very beginning, get the whole set: you’ll be glad you did.

High Crimes is a crazy difficult departure from the original game, but players won’t have too many problems getting the hang of the murderous new elements.