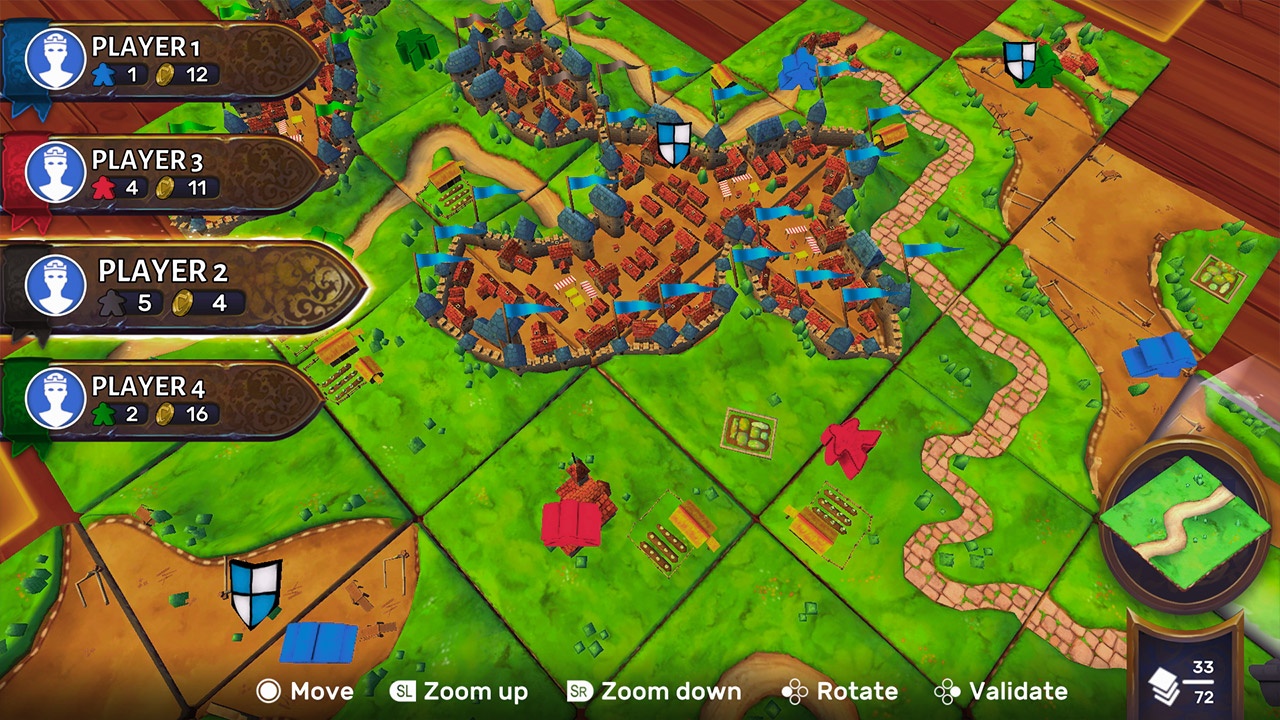 No matter how much I enjoy playing video games, it’s sometimes nice to pay a visit to their roots and sit down to a good old-fashioned board game. Sometimes the physicality of playing with actual pieces can outshine the digital versions; although it can also be argued that the reverse also applies. It’s in this respect that some games transition better than others and this can be largely attributed by the most successful of gaming ingredients: simplicity; as more often than not, the simple games are usually the most playable and in that respect, make the leap from physical to digital more successfully. One such game that plays well in a digital format has to be Carcassonne, a simple yet challenging tile-based game that now sees a release on the Nintendo Switch.

Developed and published by Asmodee Digital, this age-old game requires players to lay down a series of tiles; each one depicting a style of landscape from roads, villages and fields in order to own as much of the land as possible to gain points and win the game. Although its set-up is sublimely basic, the rules and mechanics of the game require a good tactical mind, a reading of the play and a sprinkling of luck; all the basic elements that make up a good game. For the uninitiated, this can be a difficult game to get to grasps with, especially within the digital version where the rules are only touched upon and in all honesty, don’t really help that much. However, with further play comes experience and in the tactical style of the play, is a priceless concept.

As well as offering a single-player component, the game also caters for up to six players locally, with a pass-and-play mechanic that can be played docked, handheld or in tabletop modes. There’s no board to speak of, as through the laying of tiles by each player, the board is created as you play; creating a random element with each playthrough as the position of the tiles produces a different landscape layout each time. It’s here where the tactical element of the play comes into being; watching how the land is formed, as well as keeping an eye on where you lay your tile upon your turn. This becomes an important asset as you gamble with your meeples, or people, and lay them on segments of tiles or whole tiles in a move to try to claim the land. 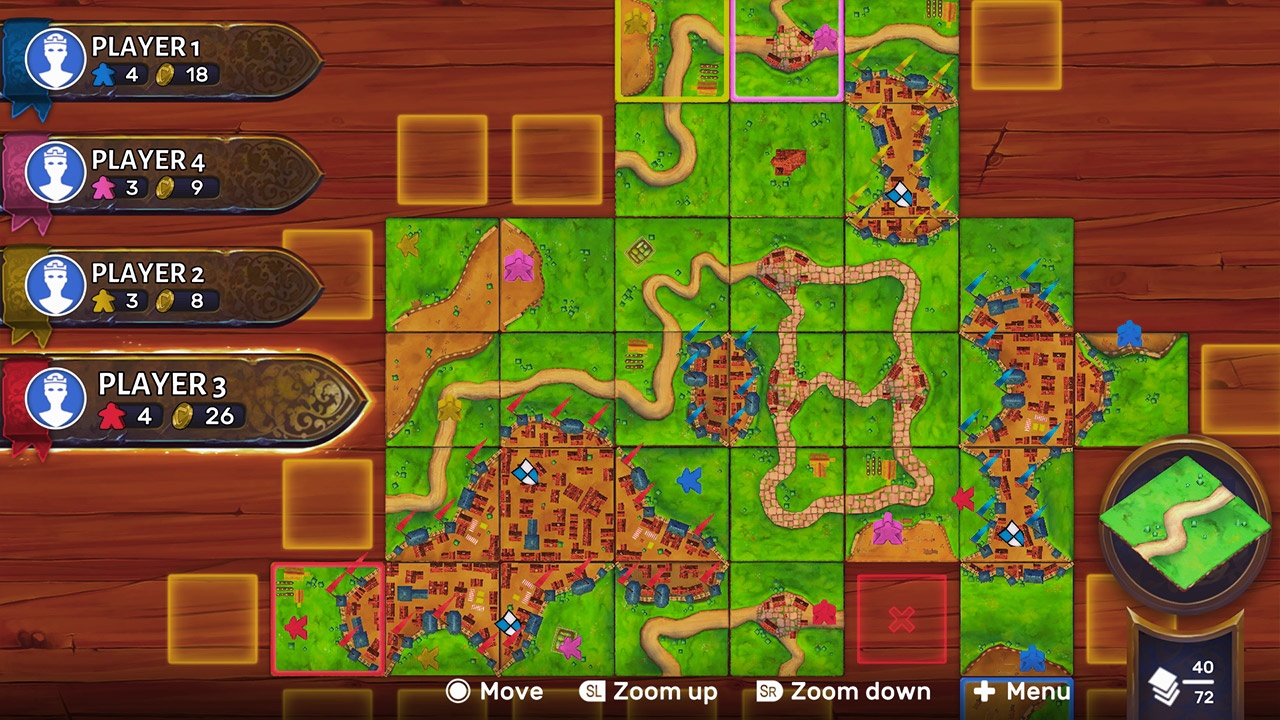 If you fancy owning a road, or pathway, then you lay your meeple upon it and continue to build until it has a start and an end. However, your opponent may try to lay tiles that disrupts your plan, or they may move to produce a bigger prize, making it essential that you try to stop them from achieving their goal, but also working towards taking your prize at the same time. It’s this mechanic that makes this a game extremely difficult to master, yet sublimely easy to play. Should you gain the land you are playing for, then your  meeple is returned to you where you can claim further tiles on the board. However, find yourself in an incomplete segment, then the meeple remains on the board, although it can still contribute to a final match-up in scores.

Scoring is based on the amount of tiles that you own; either through inhabiting them with your meeples, the amount of tiles that surround yours and the regions of the board that are complete. Each time the board is built, it comprises of several elements that can all be used to accrue a score for you. However, the more segments you complete, the more meeple you can lay and the higher the score you can accrue. Lay all your meeples too soon upon incomplete segments and future structures that appear may lay unclaimed or stolen by your opponent. It all adds to produce a level of depth rarely seen in a board game and even within some video games too. 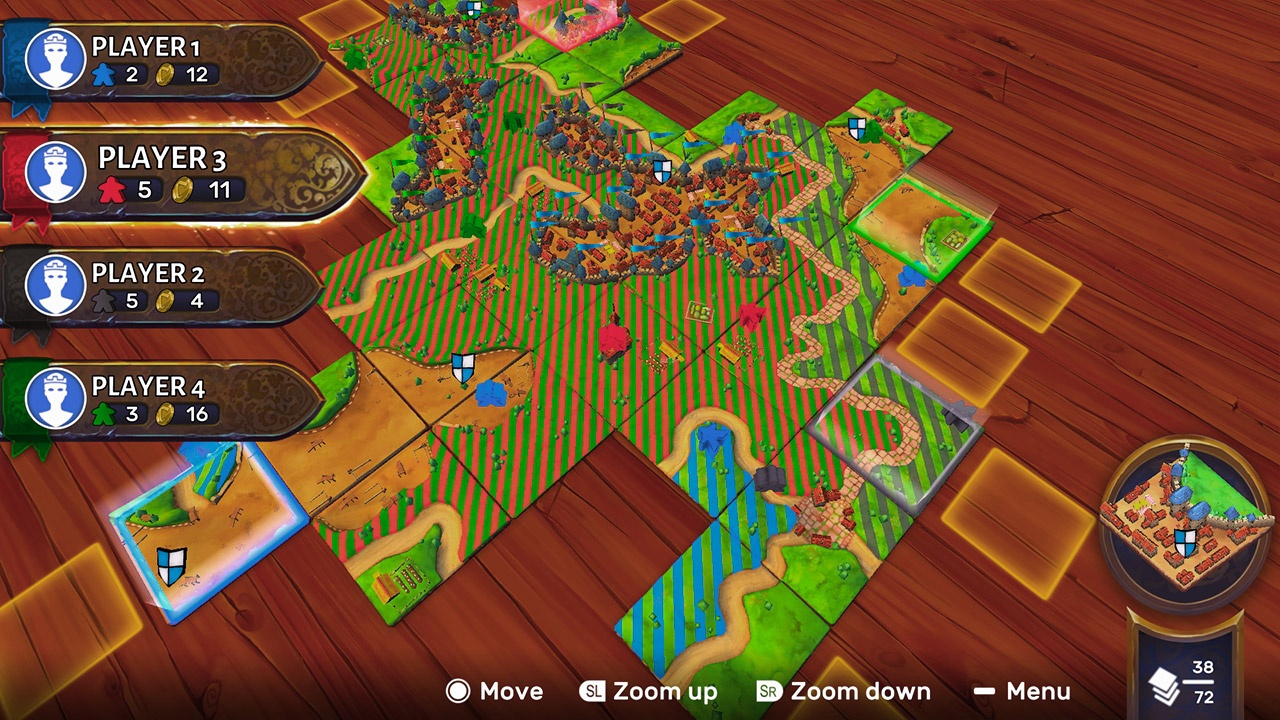 Everything is presented is an easy fashion, with a 3D representation of the board, tiles or landscapes. It all zooms in and out automatically when it is needed, allowing for easy meeple distribution and detailed views of the tiles. You can also alter the viewpoint to produce a 2D top-down view to give you a tactical bird’s-eye view of the playing field. Each of the tiles faithfully recreate their real-life counterparts of the Carcassonne style with a colourful aesthetic that is easy to view. The audio qualities are pleasant too, with a background soundtrack that never grinds or feels tiresome, as well as the obligatory sound effect. However, the sound is probably the least important aspect of the game.

As well as the base game, this Switch version also comes with the The Abbot and The River DLC bundled, plus at the time of writing this review, the Inns & Cathedrals DLC is also available for free to download from the eShop. These extras add new tiles and meeples to the gameplay, as well as extra rules and scoring opportunities. There’s plenty of content here and an endless amount of replayability that keeps the game going over the long-term. However, I would advise getting to grips with the base game before attempting to play the variations that these DLC extras bring.

Overall, Carcassonne brings one of the most popular and playable board games to a digital format that is easy to play, yet difficult to master. If you’re already familiar with the game, then everything is here, plus more and it plays superbly in recreating the mechanics of the game. Each of the games take around twenty to thirty minutes to play through, making it an ideal casual experience or the perfect puzzler with which to relax to. It’s a classic game, with a classic formula that remains completely intact with its port to the Switch; making this a must-have title if, like me, you’re a fan of a good old-fashioned board game.

Carcassonne: The Official Board Game Review

The classic board-game brought to life in a digital format for the Nintendo Switch.