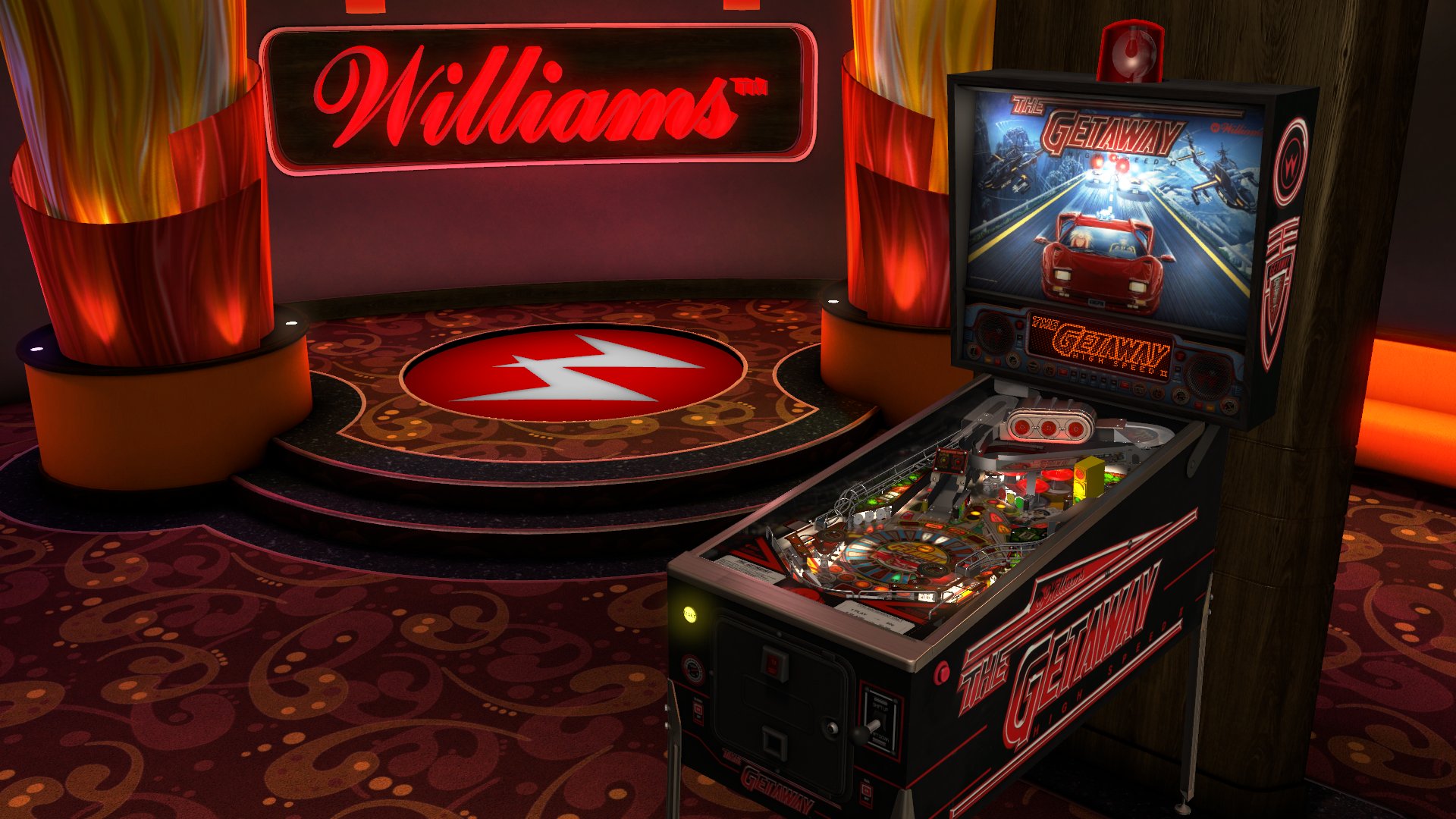 It’s been a while since we’ve heard from the guys at Zen and their amazing pinball front end, Pinball FX3, at least as far as their Switch releases. Switch owners have graciously swallowed the bitter pill that not every table will get ported to their beloved handheld machine, and it’s not easy to understand, but it does make sense. The main game itself, however, has gotten a good deal of overhaul, running smoother and easier than before. Now, nearly a year after the last DLC update, Zen is waking up to deliver a two pack of DLC content, along with a free table for users to sample out. Suddenly it’s clear who picked up the Williams’ license that was taken from Farsight Studios: Zen is here, and they’ve done a hell of a job porting some classic tables in their Williams Pinball Volume 1 DLC.

Fans should start knowing that these three tables in the pack (Getaway, Junkyard and Medieval Madness) have all been given a serious Zen treatment that is 100% optional. Naturally, things like the extra multipliers, game modifiers and EXP-based targets exist in the separate single player mode, and folks are perfectly free to open up a vanilla, no-frills game instead. However, besides this, Zen has also taken extra, intensive care to make sure the ports of these tables are as close to the original has humanly possible, showing some impressive side-by-side footage on their social media of how the physical game played versus their digital copies. The physics, the responses, the curves and the flair are all spot on, and it’s truly impressive how much these people love pinball. If you want that extra bit of digital goodness, though – animated avatars, a brilliant color scheme, things that simply weren’t possible in the real world – it’s as simple as pushing a button to turn them on or off. I would often toggle between them just to see the differences, and I can attest that the graphical upgrades are pretty, they’re fun, and they in no way impact on the core gameplay. So, kudos, Zen, you did a good one.

Junkyard is probably the low man on the totem pole for this pack, but it’s honestly like saying that Ringo was the worst of the Beatles. With Junkyard, the concept is that you’re sneaking into a sprawling landfill to steal parts from the crazy owner, hopefully to fashion new items and make a quick buck in the process. The table, as far as interactions go, is simplified: you’ve only got two flippers (which is a welcome relief), three ramps, and, the centerpiece of everything, a tiny wrecking ball that swings wildly when the table gets bumped or you hit it. The wrecking ball is damn fun: not only is there a cool effect of having it smash down other panels and get points for you, being able to successfully navigate around it to “slip in” to the Junkyard is a surprisingly rewarding feeling. 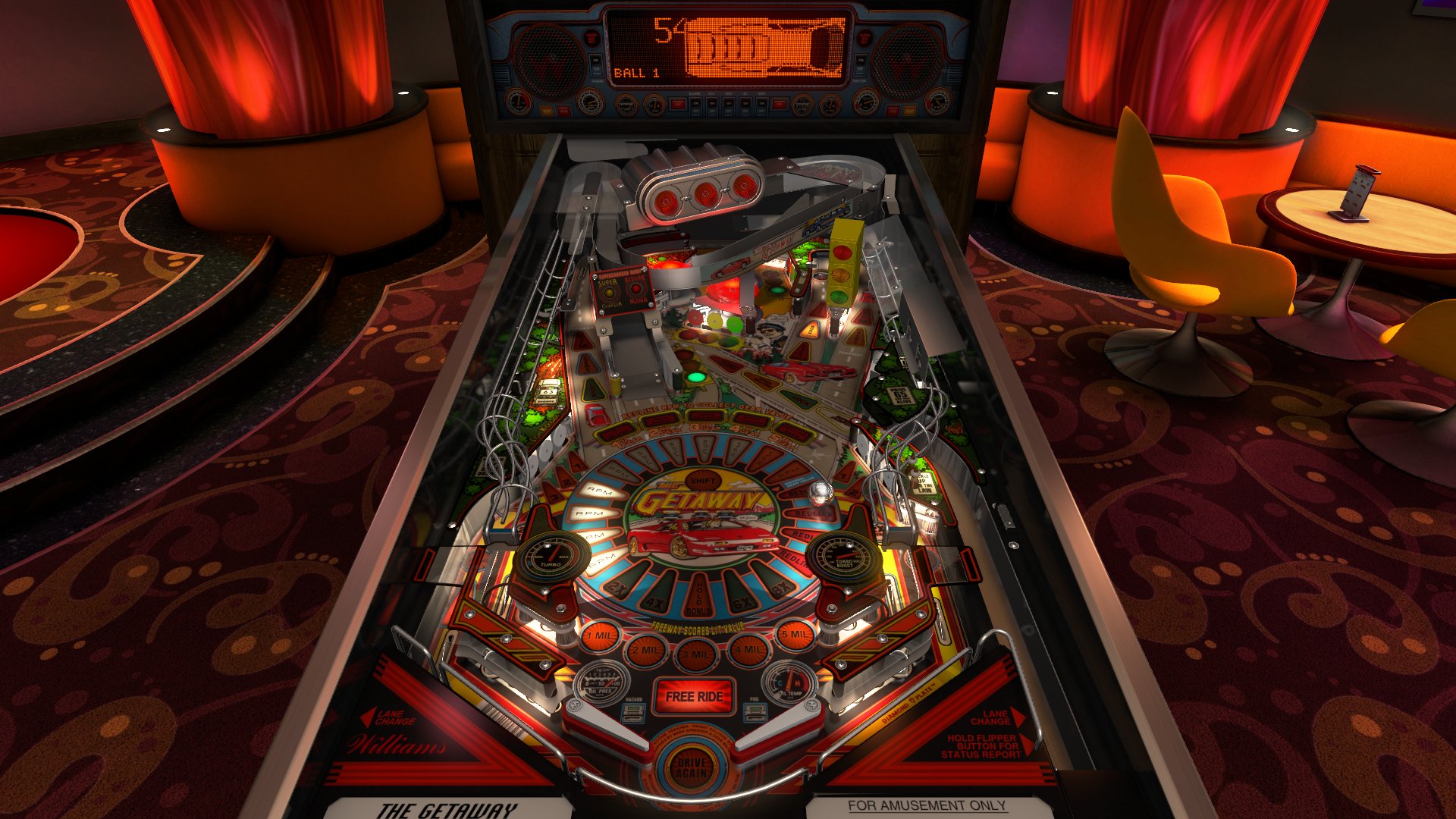 I often judge tables by how well or not well I can play them initially, and it speaks volumes about what I think about them, overall. On Junkyard I did pretty good on out of the gate, but I don’t feel like my seven million score is due to finesse and skill. I’m pretty sure it’s because I hit the multiball bonus twice in a span of about three minutes, and that’s just giving it away. While the table still adheres to middle generation scoring (usually thousands, keeping things to five digits, big bonuses being six), you rack up points with breakneck speed with just a bit of precision. Getting behind that wrecking ball is a big deal, yes, but getting up the ramp and hitting the toilet (which does spray water if you have the digital effects turned on) is pretty damn lucrative as well. With only three balls, it doesn’t seem like it should be such a cash cow, but, again, when your three turns come at four to seven balls a go, it can build incredibly quickly. This is a good one to compete against others in a “who can get the most” effort in a limited amount of time. Love it, enjoy it, but fully see that I did great because the table loves me, not because I’m a Pinball Wizard.

Medieval Madness almost fell into the same trap as the Junkyard did from the very beginning. I’m sorry, but when you don’t get a plunger, just a “launch ball” button, and you pull off a skillshot, that doesn’t make a damn lick of sense, and I almost wrote this pack off as a gimme DLC where everyone gets trophies. Instead, I stuck it out for this two flipper, two ramp Dark Ages themed table, in which you’re either a knight or a knave, it’s kind of hard to tell. There’s bit of everything happening here in terms of table effects, and it’s a good reminder that the 90s, especially the late 90s, were rife with amazing contraptions to keep kids in the arcades. You’ve got a dragon that gesticulates and roars as you hit its ramp. There’s a catapult that seems to actually launch stuff, and a castle in the center that slowly lowers its drawbridge and allows you to raid inside. The digital effects add some explosions and fireworks, but, seeing how the table originally presented, complete with moving turrets, it’s impressive what Williams was able to deliver.

The missions and bonuses are well paced, fair and evenly pointed. Knocking out the trolls that occasionally invade is no small task, and you’ll often accidentally end up jousting or knocking on the castle gate instead of nailing the last green monster. In turn, though, this leads to some massive satisfaction when you’re able to finally storm the portcullis, slay the dragon or defeat the monsters, and the points reflect this in an earnest and fair way. The whole thing is orchestrated with a good number of clashes, clangs, dramatic horn music and some suspiciously French sounding knights inside the castle. This was probably as close as a Monty Python homage that Williams was allowed to do without paying royalties, and I’m perfectly fine with that. 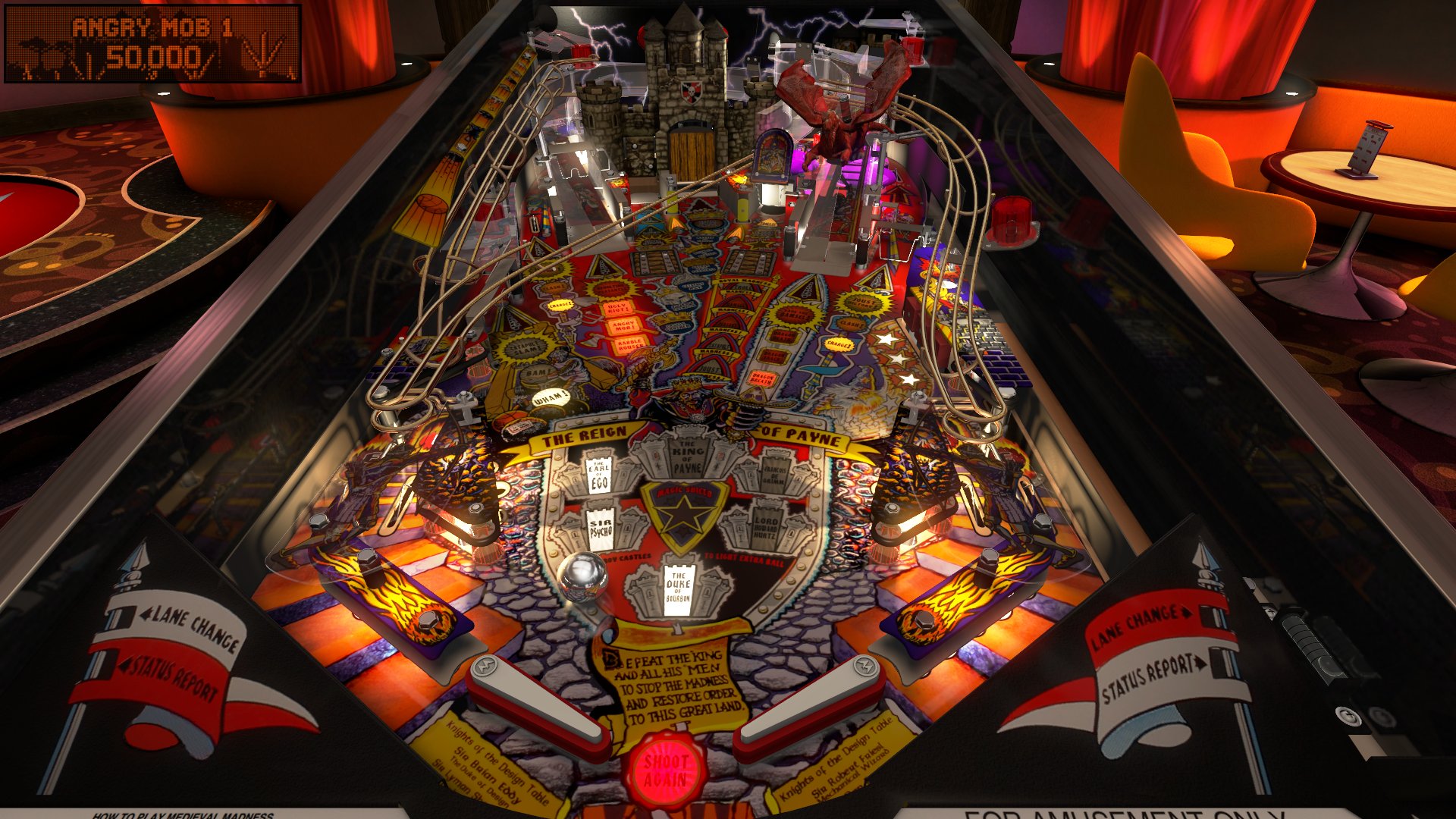 The Getaway is our final table, and it’s a nice combination of potential as well as execution. As you might glean from the title, the purpose is to be on an escape from the police, careening your ”car” around the table in an effort to shake the cops, perform crazy stunts and make the most noise and smoke while also giving the slip to John Q law. It’s another single button launch, but that seems almost appropriate for the table in question: you aren’t gauging how fast or slow you’re going to be taking off, you want to go as fast as possible. The table also receives the most augmentation in terms of digital after effects, adding color, the police, some dramatic flames in strategic places, and changing the color of the ball to add this sense of speed and urgency to your play. As you keep the combos going and maintain your scoring, the ball stays red: relent and slip up, and it fades back to dull, slow steel gray.

The Getaway does what few pinball tables perfectly achieve, which is to keep a player engaged and totally immersed in the situation at hand. For any tables, the speed and excitement of it all only continues as long as the bonuses are running, or as long as you’re successful in making the right kind of multipliers activate. With the Getaway, the combination of format, soundtrack and design make for a seriously high octane situation in which you’re constantly chasing down what you want or need to do next, affirming that your position as resident roadway bad boy is the only way to be. I liken it to one of the Jurassic Park tables in which you’re crashing through the jungle, only this one makes more sense because people escape from the cops everyday: you only encounter dinosaurs maybe twice a lifetime. This is a table that begs you to make sure the game keeps on rolling, and it works fantastically as a Zen experience because the constant burn of quarters is replaced by reloading and trying again with new modifiers, extra EXP bonuses and basically a stronger sense of play every time. It grows on you in a super positive way. And when you get your ball launched into the speedway in the center of the table and you watch millions of points get racked up in a matter of seconds, it feels so damn good.

Zen constantly has the option to create new tables or innovate old ones, and I think they made an incredibly wise choice by focusing on the Williams brand with this DLC. Each table is worthwhile, not just for pinball fanatics but also more casual players. This pack affirms that the FX3 experience is still the best damn pinball front end for the Switch, and patient players will be swooping in to grab this (and hopefully the second) pack as soon as they get their Christmas credits.

Old meets new in this exciting DLC pack from Zen, preserving the classic Williams design and style while injecting some modern digital flair.